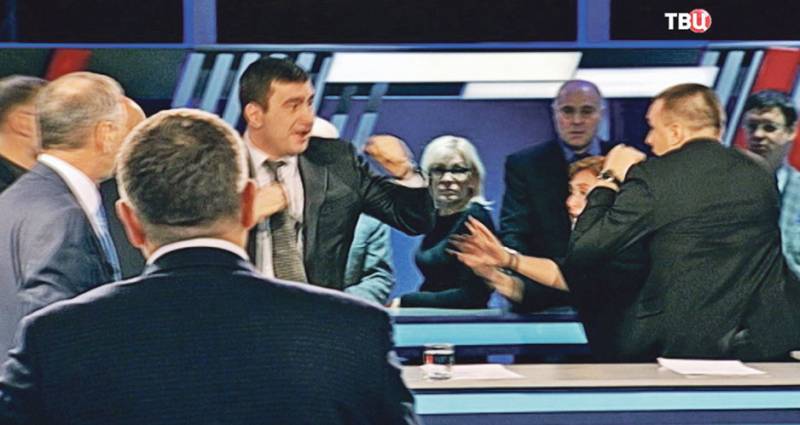 With the help of TV-broadcasts and the Internet, you can demoralize the troops and population of the country, deprive the enemy of purpose and will, manipulate public opinion, bring down the state's economy. This is today's reality.

Impact on the minds of people through television is around the clock. It is worth picking up the console, as a stream collapses on the average man, gradually changing the perception of the surrounding world. The information that forms the consciousness of the viewer is contained in all programs - from analytical to entertainment. It has already been processed, flavored with special effects so that the consumer can accept, assimilate and remember it.

"Helmets" without a mask

In the Chechen war, live reports were broadcasting that in Grozny, Russian soldiers put up a live shield of local residents, and in Samashki they cut off people's heads and killed children. While the reality was different: it was the militants who were covered by old men, women and children, when they left the encirclement, and the captured soldiers were exposed to the windows from which they were shot.

CNN host K. Baldwin almost burst into tears on the air, talking about a five-year-old Syrian boy Omran, who was wounded during the bombing of Aleppo by Russian aircraft. A journalist K. Amanpour, interviewing Sergey Lavrov, showed him a photo of a child with the words: "This is a crime against humanity."

Later it turned out that the house of O. Daknish was destroyed by the militants, and the “journalists” who shot Omran offered the boy’s parents money for taking part in a propaganda campaign. “Our journalists have exposed one of the worst fakes about Syria. Next time we take with us Christian Amanpour and everyone. If only they have the courage to talk to the boy Omran and his family, ”said RT editor-in-chief Margarita Simonyan. Nevertheless, the cadres spread around the world on social networks, which gave rise to numerous public organizations and politicians to demand the cessation of the operation to free Aleppo from the radicals, and to blame Russia for the sufferings of children.

On April 4 this year, Western television channels showed a production video of White Helmets about the consequences of an airstrike, allegedly inflicted by Syrian bombers in the city of Khan Sheikhun in Idlib province. At the same time, the type of ammunition shown did not apply to aviation means of destruction and especially to OM. It lacked the tail and any markings. Most likely, it was a homemade mine. As for the victims, the directors made an attempt to imitate the effects of the use of sarin. However, people in the frame did not have characteristic signs of poisoning by this OM. But the pupils in all the iris - traces of taking narcotic or psychotropic drugs - were evident. Representatives of White Helmets provided assistance to victims without the use of personal protective equipment - gloves and gas masks. But if a poisonous substance had actually been used, a person in contact with him without protection would definitely be defeated. In the frames, healthy and vigorous “rescuers” moved chaotically and unprofessionally: some watered the victims with water, supposedly washing away chemicals from them, others immediately did artificial respiration.

In the video, a representative of the "White Helmets" roughly grabs the "injured" child and for some reason runs with him to the wasteland. But he immediately slows down after the scene with his participation was filmed.

All this is evidence of another fake, slaped by an organization that has proven itself to be the creator of the staged “documentary film” and is associated with terrorists. Nevertheless, cheap fake had the effect. The US President Trump, impressed by what he saw, ordered a rocket attack on the Syrian air base "Shairat" in the province of Homs, in the end - nine casualties among civilians, including four children.

In the Manual on Psychological War, released in the USA, it is said: “It is necessary to create the impression that everything that is reported is true that the nail of propaganda, its essence, is composed of direct harsh facts. The art of truth is not to tell a direct lie, but to choose what is required and mix in the truth that the audience wants to hear. ” Guided by this, American TV anchors repeat mantras over and over again about the insurmountable technological gap between Russia and the United States, while continuing to buy our rocket engines RD-190.

Unfortunately, it is not yet possible to refute the entire stream of lies pouring from television screens, due to the active opposition of non-engaged media by oligarchs, government and political figures who intervene in the work, closing and prohibiting the broadcast of unwanted TV channels, as is now happening in the United States with Russian RT.

Assignment to the aggressors 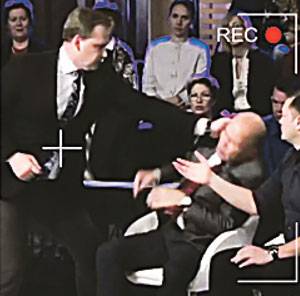 The reason for the defeat of the United States in Korea (1953 – 1956), Vietnam (1965 – 1975), Somalia (2005) and other confrontations is the same: these wars were not supported by American public opinion. At the same time, when ideologists succeeded in instilling in the country’s population the need for hostilities, the Pentagon won victories (in the Persian Gulf in 1991, and in Iraq in 2003). Then, thanks to television reports from the Middle East, the world public opinion purposefully raised a wave of rejection of the actions of the “aggressor”, creating an atmosphere encouraging decisive penalties for the invader. TV analytical programs have long discussed how to curb it - economically, politically or militarily. And when public opinion, tired of psychological stress, reached a state of fitness, airstrikes followed the sighs of relief to the townsfolk.

On the role of television in 1994, during the Haitian crisis, General D. Shalikashvili frankly said: "We do not win until CNN says that we are winning."

In modern wars, unleashed by Western countries, the calculation is made primarily to defeat the public consciousness of the enemy, destabilize the internal state of the people who fell under the distribution. That is how the United States seized control of North Africa, Iraq, Afghanistan, Yugoslavia, Georgia, and Ukraine.

Washington’s dominance on world and national television channels of countries open to American investment is a key factor of influence. Leading broadcast only the point of view that meets the interests of the United States. All crimes committed by them against whole nations are presented as exploits, and responsibility for the massacres of civilians lies with the enemy.

To create an image of the enemy, television directors, journalists and cameramen use various methods of influencing people's minds: setting a la Hollywood for non-existent events, false reports with invented heroes and antiheroes, distorting the meanings of actions being shown, etc. The dominant position of American television channels allows the ruling elite to manipulate public opinion and global arbitrariness: to carry out coups, to subvert political leaders, to provoke international conflicts, to unleash civil wars, to appoint and to punish the guilty, is declared the winner.

As the American campaigns against the USSR, Yugoslavia, and Iraq have shown, even a very strong adversary is unable to defend himself in the information war. Unable to use Tanks against TV or rockets against the Internet.

Russian television plays an important role in the information war launched by Washington. The agents of influence, who have captured television, diligently solve the problem of organic “implanting” the ideas they need into the mass consciousness. In the role of a “good adviser and friend”, TV prompts the Russian citizen where to invest money, where and what to be treated, which film is better to watch, which politicians to trust, to be friends with ... And at the most crucial moment for the country, they do not advise from the screen, but command sometimes resorting to threats, for whom to vote, and whom to ballot. The patriotic opposition views television as the main criminal force that suppresses people, demoralizing the army and the country's leadership.

And all this is served with a sauce of pluralism. Like, you need to know different opinions. Yes, the older generation already knows the value of democracy and its minions. At one time, society succumbed to false representations about our country: "totalitarian state", "evil empire", "prison of nations." But young people do not know about the meanness of provocateurs Democrats. It is designed and tirades of modern domestic Russophobes, hammered into the minds of Russians through television.

A special role is played by the so-called analytical programs, on which guest performers from the near and far abroad are registered, who decry our country and people, such as Kovtun, Tryukhan, Karasev, Yakhno, Zhovnirenko, Bohm, Koreyba, Matseychuk. In a decent society, such boors are not allowed beyond the threshold, and the Russian hosts, on the contrary, repeatedly invite them to their programs. And all this rampant Russophobia through central channels is financed from the budget of the country. And by the "dear guests" are paid travel and accommodation.

In any other country, for such slander, criminal cases would definitely be brought in and, at best, banned from entering. But not with us. Vladilen Arsenyev, who directed the television programs NTV and NTV-plus, described the activity of the telegram as follows: “We are engaged in cynical work. The less money, the less you think about the motherland. This is an old rule. Anatoly Lysenko, Director of the Public Television of Russia, gave good advice: “Highly intelligent people need not to watch television.” Before his death, academician Vitaly Ginzburg declared that sooner or later our Russian television would be recognized as a criminal organization.

Ctrl Enter
Noticed oshЫbku Highlight text and press. Ctrl + Enter
We are
Amphetamine "Revolution of Dignity" as the embodiment of mass psychosisWhat you didn't want to know about England
Military Reviewin Yandex News
Military Reviewin Google News
9 comments
Information
Dear reader, to leave comments on the publication, you must to register.