Salvos of revolution. We want to clean them from memory, in China - piously honored

October 31 2017
18
Sixteen hieroglyphs that may well shake the world: "Xi Jinping's Theory for a New Era of Socialism with Chinese Specificity."


The 19 congress of the Communist Party of China scored television broadcasts in red and made the fortunetellers sweat on the coffee grounds. 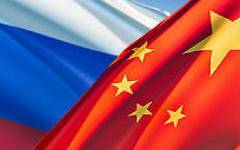 What's happening? Where does every fifth inhabitant of the planet move to the right, to the left? What does the rearrangement of dispassionate people in black suits at the top of the most mysterious pyramid of power mean? However, our rumor is not spoiled historical by compliments, I should have been glad already with such a preamble:

SI ZINPIN: A hundred years ago, the volleys of the October Revolution brought Marxism-Leninism to China. Since the founding of the party, the people of China have relied on it in their quest for liberation, independence, prosperity and happiness.

In fact, about the Aurora volleys - this is a direct quote not so much from Russian history as from Mao Zedong, from his speech of the 72 of the year. To make it immediately clear who the speaker is cleaning himself under. The quote in the original was: "Volleys of the October Revolution brought us Marxism-Leninism. Forward for the Russians, we have come to such a conclusion!"

In 90, the Russians changed their minds and went the other way, to now observe their neighbors with a mixed sense of skepticism and envy. China approached the 19 congress by the second or even the first economy of the world, which the party’s web portal tells us in a clear and modern form, in pleasant English.

How has China turned from a poor country into a second world economy? Since 1952, China’s GDP has grown 1000 times. At first, the economy grew slowly - it was hampered by the planned system and political campaigns. With the arrival of Deng Xiaoping, the country began to move in the direction of market transformations and the disclosure of its potential. This allowed China not only to become a worldwide workshop, but also to pull millions of people out of 700’s poverty. The reason is not only in cheap labor and the size of the market, but also in the effectiveness of the central government.

Actually, this is the general line of the congress - as we approach the xiaokang, a society of average prosperity, as Deng Xiaoping called it according to the Confucian tradition, the party’s leading role will not weaken, but will increase. Therefore, no jokes about Mao, Marx, Lenin, or, God forbid, over the chairman himself. Although bloggers try to be ironically mild, comparing editorials in official newspapers today and in days of previous congresses.

Yes, the role of the individual in Chinese history has grown markedly. Under the control of the party will remain reform, the fight against corruption, the modernization of the army. Strengthening party discipline under the leadership of a strong leader is a recipe for many difficulties that China must overcome. Among such challenges are weakening economic growth, and a dangerously large debt, and social stratification, and increasing friction with small and large neighbors.

The main message of the congress is addressed to the biggest and most cocky Pacific partner:

SI JINPIN: The Chinese love the world. We will never go to aggression or expansion. But we are absolutely sure that we will repel any invasion. We will never allow any people to reject Chinese territory. No one should expect what will make us swallow bitter fruits that are poisonous to our freedom, security, or our development.

About bitter fruits is a very topical metaphor, which, of course, is addressed not only to China’s two-million national liberation army (the second-largest budget in the world), but also to its most likely adversary. It turns out almost a mirror image. The 19 congress proclaims the course: "Let's make China Great Again." And on the other side of the ocean comes: "Let's make America Great Again."

DONALD TRUMP: I am very pleased to announce that for the first time our Ministry of Justice has identified large networks of Chinese drug traffickers. They will now be pressed, the charges for the supply and distribution of fetanol in the United States.

Trump was referring to fentanyl - a synthetic drug that has become a real scourge for the poor neighborhoods of Chicago, Detroit or Los Angeles. The United States opioid epidemic — 2 of a million drug addicts — is, of course, a big problem, exposing the inside of Tramp getting up from his knees, in which only stock market indices stand up and hidden unemployment goes off scale. But the thing is different. Hysteria - "China specifically puts Americans on fentanyl" - is fully consonant with the famous aria about Russian hackers. And since Trump is about to visit Beijing, his interest in this topic can hardly be considered accidental.

USA TODAY: Today, China is the main source of fentanyl and its derivatives, where illegal laboratories can hide in the depths of the gigantic chemical industry, which the United States cannot control. Although the Justice Ministry announced a great success, thanking China for its assistance, it is unclear whether the arrests in China itself and the factories there will be closed. All of this is doubly interesting, given Trump's upcoming visit, since he intends to put pressure on Xi Jinping and seek to fulfill the moratorium on the sale of fentanyl, as well as issuing in the US those involved in the drug trade.

Well, after the convention, it is clear that Xi Jinping is not one of those who allow himself to push. However, Trump can not push. There are no weaklings and nerds left in the world. All the guys are cool. Therefore, if the Chinese side does not show the required negotiability, it may well suffer ... Korea.

It should be understood that the DPRK does not represent for the United States neither danger nor interest other than in the context of the containment of China. The war on the Korean Peninsula is the very grenade that can completely confuse the cards on the table and cancel the ambitious plans of the Chinese Marxists. By the way, if in Beijing they really remember Marx and Lenin, they hardly consider what is happening as a miracle.

IMPERIALISM AS A HIGHER STAGE OF CAPITALISM: A non-economic superstructure growing on the basis of financial capital, its policies and ideologies reinforce the striving for colonial conquest. In all countries of the old civilization, there is accumulated "impatience, irritation, hatred, threatening public peace; to find an application of energy, knocked out of a certain class rut, to give it a deal outside the country so that there is no explosion inside."

And wishing to give an exit of energy - a dime a dozen. In the plans of the same Trump, a visit to the demilitarized zone on the border with the DPRK and an inspection of the 38 parallel. What he has warned everyone ten times already.

DONALD TRUMP: I have a very good relationship with President Xi. He now has a party congress, which will give him unprecedented powers. So that's great. He is a great guy. They help us, block Korean banks, cut off oil supplies. But, of course, we do not fool around here. He is for China. And I am for America. 93% of all commodity flows in the DPRK passes through China, that is, everything depends on China. But irrespective of this, we are ready. You would just be dumbfounded if you knew to what extent we are ready. If required. Well, if not required.

Something still suggests what is required. Especially if you listen to American generals who periodically urge to study the history of the previous Korean war. If we take into account the presence of three aircraft carrier groups near China - from Monday the USS Nimitz, Reagan and Roosevelt stroll in the South China Sea along with the Aegis floating complexes and nuclear submarines. Given the return of American nuclear aviation in constant combat readiness. Or news that the UK is preparing plans for the evacuation of its team from the upcoming Winter Olympics in Pkhenchkhane. As in the 1950 year, there is no chance that if the blow to Pyongyang is dealt, China will be able to stand aside.

But for now, all over China is a cloudless sky. And there is no reason not to rejoice at friends and comrades who continue to successfully build a building, the foundation of which was laid not without our help. No matter how differently we now treat his long-dead architects.

GUARDIAN: 2017 was a record year for the number of Chinese tourists who wanted to celebrate the centenary of the communist revolution that brought the Bolsheviks to power and changed the development path of Russia and China. According to Rostourism, in the first six months of this year, the number of visitors from China increased by 36%. The agency connects it with the so-called "Red Tourism" - an initiative of the Chinese government and Xi Jinping personally, encouraging trips to places of revolutionary glory.

Earlier in Chelyabinsk during the May holidays, a monument to Lenin was demolished on the territory of the forging factory. In Pervouralsk on the Day of Metallurgist 15, the monument to Ilyich was left without a head. 32-year-old drunk man climbed on a statue and tore his head.

Ctrl Enter
Noticed a mistake Highlight text and press. Ctrl + Enter
We are
About Stalin and KhrushchevWhat you didn't want to know about England
18 comments
Information
Dear reader, to leave comments on the publication, you must to register.