In the Caucasian theater, when 17. 01. 1915, the troops of the Caucasian army captured the city of Tabriz, and in February - March they cleared the Chokhoru region from the Turks - the war came to the territory of the Ottoman Empire. In June, before the 8 Russian infantry divisions (133000 bayonets and 356 guns) opposed the Turkish 12 infantry divisions (105000 man, 300 guns), and in December 180000 Russian with 384 guns fought with approximately the same grouping of the enemy [51]. 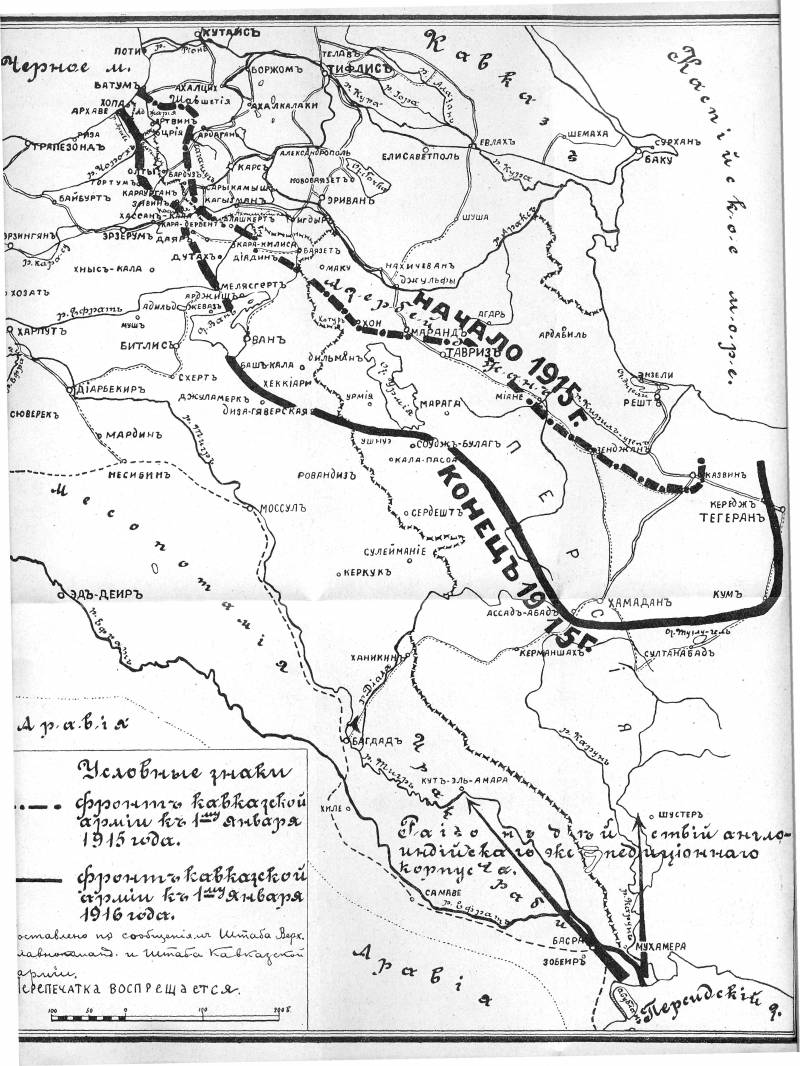 During the Van, Alashkert and Euphrates operations, the troops of the Caucasian army solved the most important tasks, forming operational and strategic prerequisites for further actions.

Operations in the Caucasian theater of operations took place exclusively under the sign of the activity of the Russian troops, including in order to keep the enemy's 3 army in constant tension, preventing it from weakening, and attracting additional forces from the Dardanelles Turks. The Caucasian theater of operations became a donor for other theaters of the Eastern Front, and the fighting was moved deep into enemy territory. The fighting on theaters were traditionally successful for the Russian weapons - And this campaign is no exception. Although in the course of the latter, the Turkish troops once again tried to seize the strategic initiative (during the Alashkert operation), synchronizing their actions with the Austro-German allies. But the Caucasian army firmly held a strategic initiative.

The 1915 campaign, as well as the previous one, began with the offensive operations of the Russian troops on both flanks of the strategic formation. In addition to the positive operational and strategic factors, there were also negative ones, the main ones being dispersal of forces in divergent areas, human and material losses, costs, and not the accumulation of much-needed resources. In connection with the transition of the enemy to large-scale offensive actions in the spring and summer, the campaign was marked by heavy defensive battles of the Russian troops in Galicia, Poland and the Baltic States.

In the period from May to September, the most strategically important territories and resources were lost, and the heaviest casualties in manpower and armaments were incurred. The main thing in this situation was the withdrawal of troops and the evacuation of material values ​​from the blows of the enemy with the lowest costs. The apogee of this tactic was the timely abandonment of Poland. Another main task was the consolidation of the front in new positions, the struggle for the optimal outline of its line for future operations. The campaign ended again with active operations of the Russian troops on the flanks of the Eastern Front (Vilna, Lutsk, Chortoria operations, the battle of the Siret-Stryp). The successful activity of the Russian troops and the exhaustion of the enemy forces led to the stabilization of the Eastern Front.

Given the landmark role of the German army on the Russian front in the 1915 campaign, its losses increased dramatically.

In this campaign, the German army lost up to 70000, the Austrian - before 800000 and the Turkish - before 30000 people were captured. Only the Battle of Carpathians, the Second Prasnysh operation and the fall of Przemysl gave the Russians up to 300000 prisoners. Successful operations on the Prut and Dniester in March - June (Prut, Khotyn, Zhuravlenskaya, Zadnestrovskaya) - even before 100000 prisoners. Autumn battles in Galicia and Volyn gave Russians up to 150000 prisoners. The losses of the enemy during the Gorlitsky strategic operation were also high.

In the 15 campaign of the year, Russian troops captured up to 550 guns (excluding Peremyshl guns - in this fortress almost 1 thousand guns became Russian trophies). The most significant artillery trophies were taken during the Second Prasnysh operation, the Carpathian battle and in the autumn operations in Galicia (at Lutsk and on the Siret). More than 1,3 thousand machine guns became Russian trophies - the most large-scale trophies were taken in the Battle of Carpathians, the Second Prasnyshskaya and Zhuravlenskaya operations, the battle of Seryet Stryp.

Russian troops also suffered very heavy losses. (about this in a future article on HE).

The Russian army in this campaign took the brunt of the German bloc. But the enemy did not achieve the desired result, having received only a lengthened front line and an increase in the number of theaters of military operations that required a significant number of troops. E. Falkengine lamented that the destruction of the Russian army could not be achieved [52]. And E. Ludendorff stated that the Russians were driven off frontally, and the Austro-Germans never succeeded in accomplishing a single major strategic breakthrough. [54].

The general logic of the actions of the German-Austrian troops on the Eastern Front in 1915 was as follows: first, an attempt to encircle and destroy the Russian army and its units with the help of large and small Cannes, and when this was not possible - frontal displacement of Russian troops to the maximum distance (geographically) and to the most inconvenient (infrastructural) positions - in the forests and swamps of Belarus, western Ukraine and the eastern Baltic.

The expanding Eastern Front of the First World War led to an increase in the number of theaters of military operations. By the end of the 1915 campaign, the new theaters by the end of 1914 were inferior to those established by the end of the XNUMX campaign. If the Polish Balcony consolidated other theater units of the Russian front, Polesye was broken by their connectivity.

From the end of April to 5 in September of 1915 (the fall of Vilna) the maximum value of the rollback of the Russian army in the Austro-German front was up to 500 km. The threat of the impact of Russian troops on Hungary and East Prussia was eliminated. A huge loss was the loss of important regions, the network of strategic railways (regular traffic on a huge scale generally led to a gradual disruption in the railway sector, the load on the remaining roads, coupled with their not entirely successful style, increased, and the possibilities for maneuvering operations decreased), human and material resources.

But the gradually expanding Eastern Front became a reservoir that swallowed up the reserves of the Germans and the Austrians - and Russia's allies gained advantages on their fronts. Under the cover of the Russian army, the Anglo-French almost a year of respite equaled Germany in terms of the material and technical supply of their troops, accumulated large resources, which made it possible in the near future to surpass their formidable enemy.

The best troops of the enemy were drawn to the Russian front, its living force was ground up, material resources were squandered - and the increase in the theater of the Eastern Front of World War played an important role in this. As a result of the 1915 campaign, Russia remained in line with its allies, and a positional war was established on the Eastern Front. 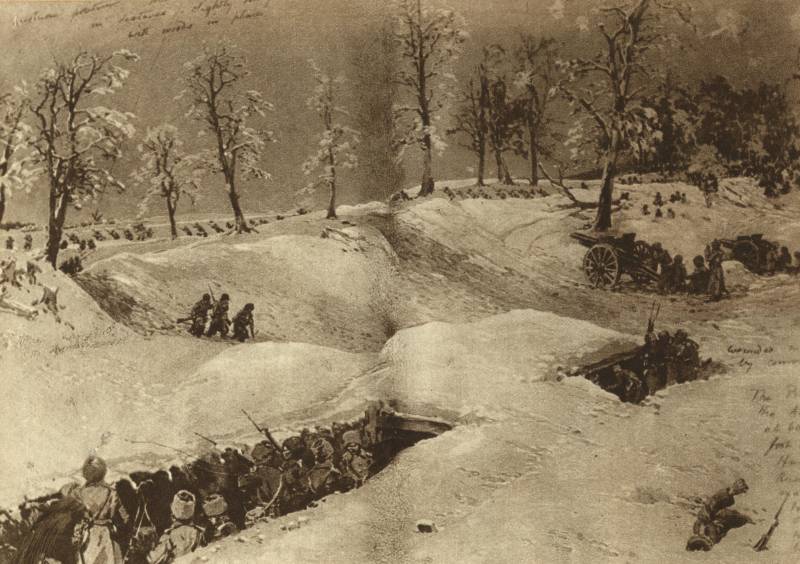 Ctrl Enter
Noticed a mistake Highlight text and press. Ctrl + Enter
We are
"Russia can in many respects yield to us." A number of Kyrgyz politicians demanded “kun-ransom” from Moscow for the royal sweepers of 1916 of the yearMarshal Sergey Sokolov dies in Moscow
24 comments
Information
Dear reader, to leave comments on the publication, you must to register.