Poorly thought out tactically (narrow front of the offensive, lack of tactical surprise, unsystematic action) and improper artillery prepared operations did not allow the enemy to penetrate deeply defensive positions. The enemy of the Russian 7 Army is part of the Austro-Hungarian 7 and German Southern armies. Russian trophies were 5000 captives, 12 guns and more than 10 machine guns.

Events in the Galician theater of war ultimately had a key impact on the course and outcome of the 1915 campaign on the Eastern Front. It is on this theater that the enemy planned a major strategic breakthrough. As a result, despite the fact that the situation on the Russian North-Western Front was calm, after the enemy’s Gorlitsky breakthrough, a general retreat was necessary, the withdrawal of troops from the “Polish bag”. Thus, the Galician TVD influenced strategic stability in other theaters of operations. But he also played a crucial role in the stabilization of the Eastern Front after the Great Retreat in the summer of 1915.

In March-June, the troops of the South-Western Front conducted a series of operations on the Dniester, Prut and Bukovina.

In the course of the offensive First Khotyn operation 17 – 22 in March, the 9 th army group (2 and 3 th cavalry corps) [41] inflicted a convincing defeat on the strike force of the Austrian 7 army, parrying the enemy’s maneuver, capturing over 3 thousands of prisoners and 8 machine guns. 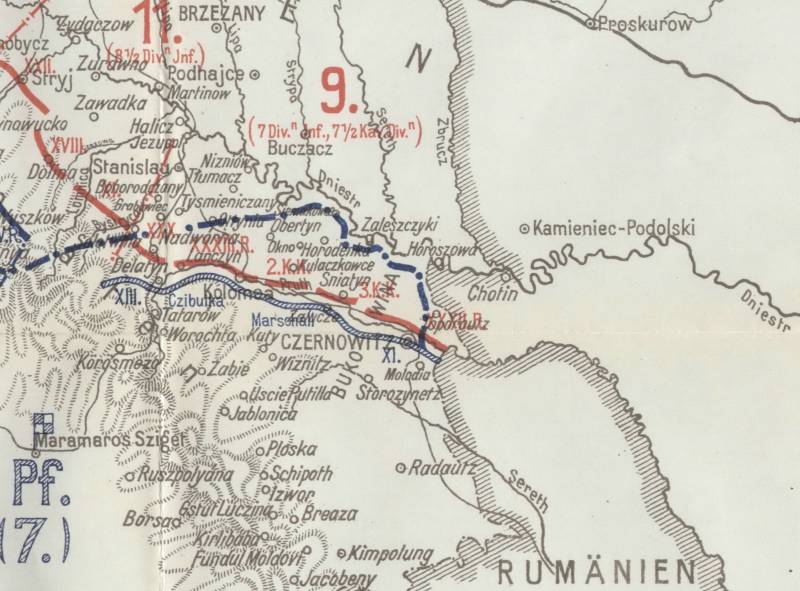 14 schema. Front on the Dniester. Episode of the German card. The positions of the Austro-Hungarian 7 and its main opponent, the Russian 9, are plotted. Reichsarchiv. Der Weltkrieg 1914 – 1918. Band 7. Berlin, 1931

Transnistrian battle [42] - offensive operation of the Russian 9 Army against the forces of the Austro-Hungarian 7 Army of April 26 - May 2. Despite the fact that there was no significant superiority in the forces required for an offensive operation with decisive targets, the strategic task that faced the 9 army in Zadnestrovsk battle - to divert the strategic reserves of the Austro-German command - was completed. The 9 thousands of prisoners, 25 guns, at least 20 machine guns, bombers became trophies of the victorious troops of the 33 th army. [43].

But, having made a successful breakthrough of the tactical and operational defense of the enemy, the General’s troops from the infantry P. A. Lechitsky, due to the general unfavorable operational-strategic situation in the center of the South-Western Front due to the development of the enemy’s Gorlitsky breakthrough, were forced to retreat frontiers. The real strategic result of this operation was that the communications of the Russian 8 Army were reliably ensured, which in the conditions prevailing in Galicia was extremely timely. Rejecting the Austro-Hungarian 7 th army far to the south, over the river. Prut, the Russian 9-I army reliably provided the withdrawal paths of the neighboring armies to the north.

At the end of May, the 9 Army conducted a successful Prut operation, taking 17 guns, 78 machine guns and more 16000 Austrian-German prisoners [44], and the Second Khotyn operation gave up to 8 thousands of prisoners, more than 20 machine guns, 1 bombers. Despite the tactical successes of the 9 Army in these operations, she was involved in the overall withdrawal of the front.

May 24 - June 2 defensive-offensive operation of the 11 Army took place at Zhuravno [45] - during the battle for the Dniester. The Zhuravlenskaya operation is not only a tactical and operational victory of the Russians, there are also elements of strategic success. The battle not only showed high activity of the Russian troops at the defensive stage of the 1915 campaign - it contributed to the transformation of enemy operational planning. The 11 army corps, having withstood the strongest onslaught of the Austrian and German troops, achieved a major success - they defeated the enemy, throwing him behind the Dniester. And this circumstance led to the collapse of the enemy’s strategic plan - crossing the Dniester, bypassing Lviv, going to the rear of the main grouping of the South-Western Front troops. Russian trophies in this operation are about 28000 prisoners, 29 guns, 110 machine guns. The actions of the Russian troops in the Dniester direction were an attempt to promptly respond to the results of the Gorlitsky breakthrough - this offensive led the enemy moving to Lviv. Only using additional forces, he managed to cope with the threat to his flank. 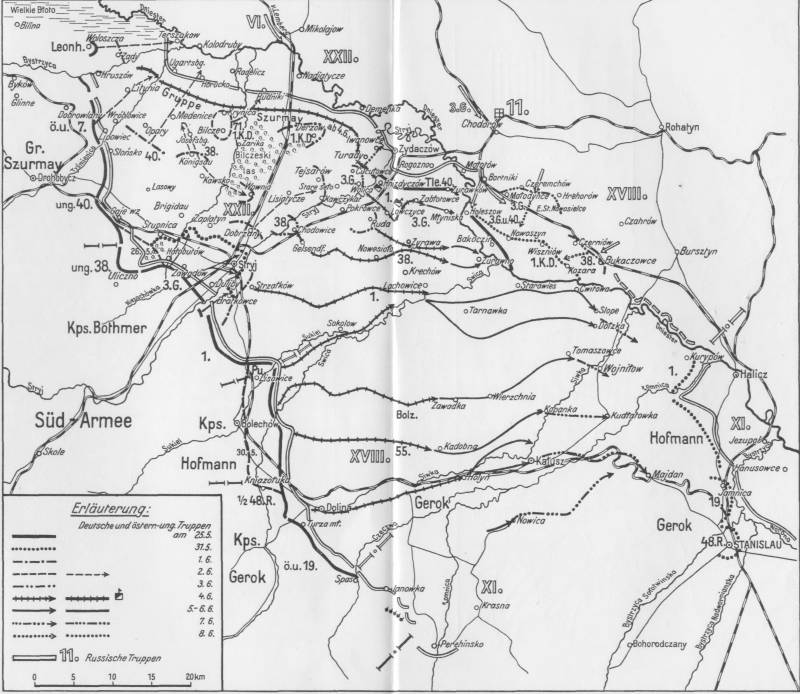 Despite the success of the Russian 9 and 11 armies that defeated the Austrian 7 and German Southern armies, the strategic position of the South-Western Front did not improve - the distance from the theater of operations from the most important operational areas affected. The overall defeat in the center of the South-Western Front forced the successful offensive to roll and retreat.

Transnistrian theater was of secondary importance and could not seriously affect the situation in the center of the Eastern Front, but it created positive prerequisites for subsequent operations and was very successful for the Russian weapons.

The Russian command, focusing on the Polish-Carpathian sector of the Eastern Front in the spring of 1915, underestimated the Baltic strategic direction - its strength and resources in this theater were mainly represented by scattered pieces of weak composition. In May-June, the troops of the Russian 5 Army fought local battles with the German Neman Army. And during this period, the Rigo-Shavelsky region, through which the bypass of the extreme right flank of the strategic building of the Russian troops of the Eastern Front was possible, acquired enormous significance.

In the Shavel battle of the Mitavo-Shavel operation [46] the Germans planned to surround the central divisions of the Russian 5-th army, closing the ring east of the city Shchadova. 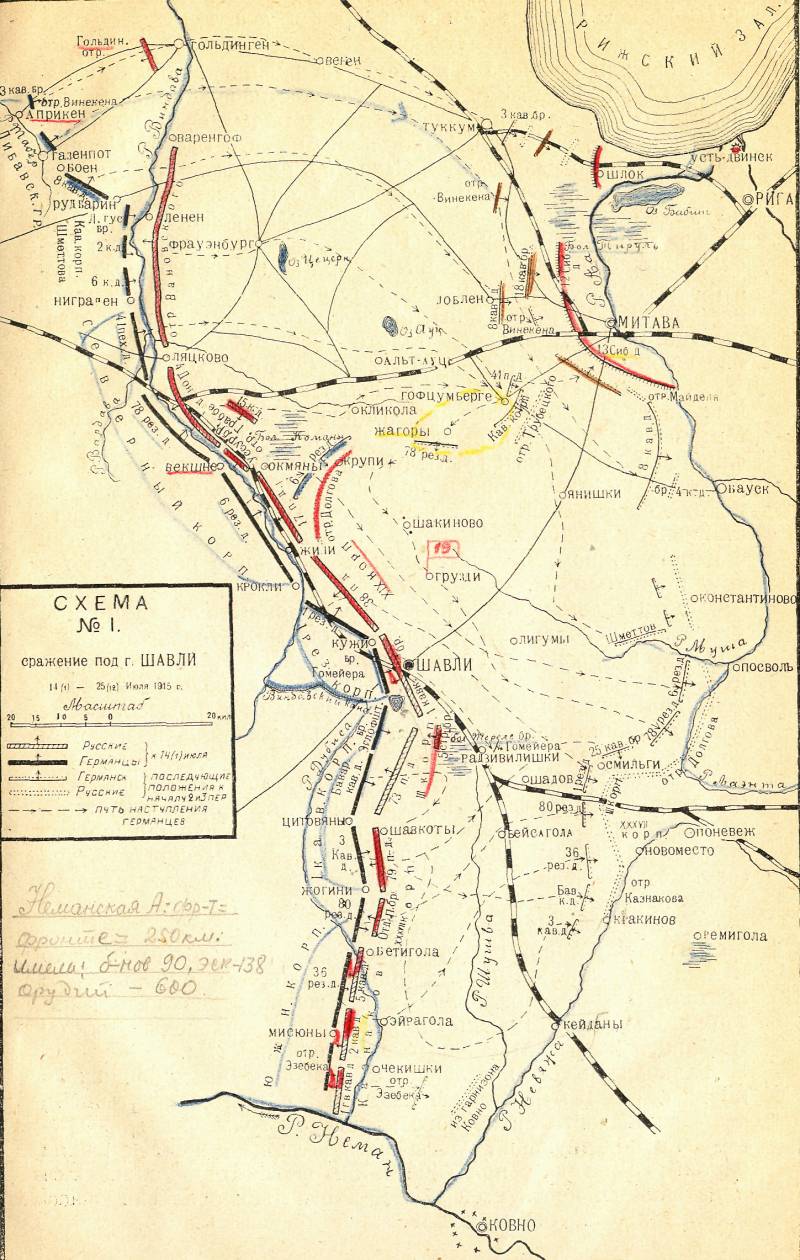 16 schema. Deployment of Russian and German troops before the start of the Shavel battle. Korolkov G. K. The Battle of Shavli. M.-L., 1926

In this operation, the Russian command was actively maneuvering the available forces, causing counterattacks (for example, the city of Mitava repeatedly passed from hand to hand), but the enemy’s advantage decided the matter. 5-I army retreated to the Western Dvina - on Yakobshtadt, Riga, and Dvinsk. The operation cost the Germans about 10000 people, the troops of the 5 army lost up to 50000 people, and the Germans reported captured 27000 prisoners, 40 machine guns and Russian 25 guns [47].

By concentrating the strike fist at Kovno-Vilna, the Russian command planned to strike the flank of the advancing enemy. But he was ahead - and on July 26, the German 10 Army launched an offensive. The main blow was struck 21-m army and 40-m reserve corps at the Kovno fortress. Since July 28 began the assault on the Koven fortifications. And although the first onslaught was repulsed, due to the lack of cooperation between the fortress and the field forces, the line of 3 August forts was broken. The garrison held on, fierce battles at the fortress often turned into bayonet fights. But the loss of control (the commandant fled) led to the inefficiency of the unorganized Russian counterattacks, and on August 9, the fortress of Kovno fell.

In the Vilna operation [48] The actions at the junctions of the Russian armies of the Northern and Western fronts gained special significance. 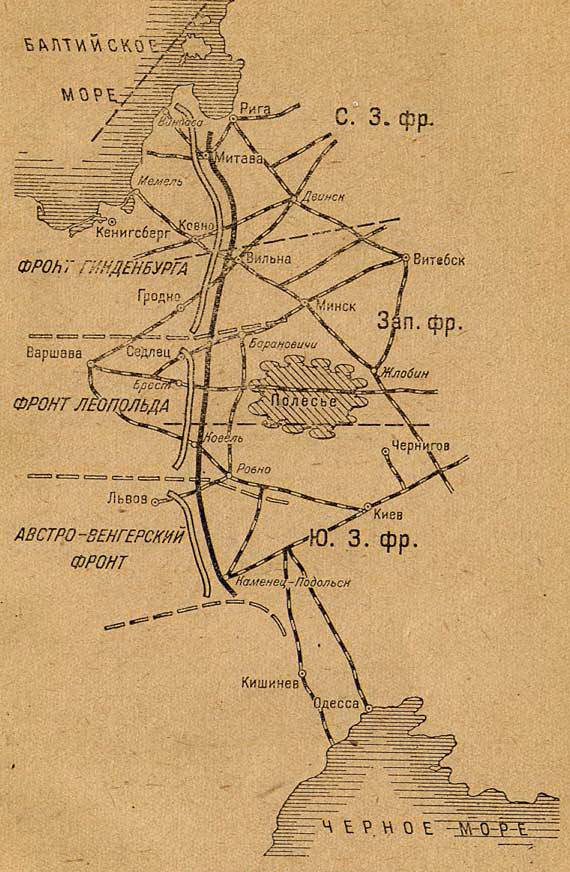 17 schema. Russian fronts and their demarcation lines to the beginning of the Vilna operation. Evseev N. Sventsyansky breakthrough 1915 M., 1936

August 27 The Germans struck the junction between the 5 Army of the Northern and 10 Army of the Western Front. Being at the junction of only the Russian horse veil greatly facilitated the enemy’s task. The Russian 10 Army showed sufficient stability, its corps, holding the northern sector of the front of the army, delayed a good half of the divisions of the shock groups of the German 10 Army. But the German 10 Army of August 28 broke through the front of Novosventsyan. The 50-kilometer gap appeared between the left flank of the 5 and the right flank of the 10 of the Russian armies. 10-I army of the Germans moved to Smorgon and Vilna, and Nemansky - to Dvinsk. The cavalry of the armies (5 divisions) under the general command of the cavalry general O. von Garnier was to break through the junction between the Russian 5 and 10 armies, striking them in the rear. 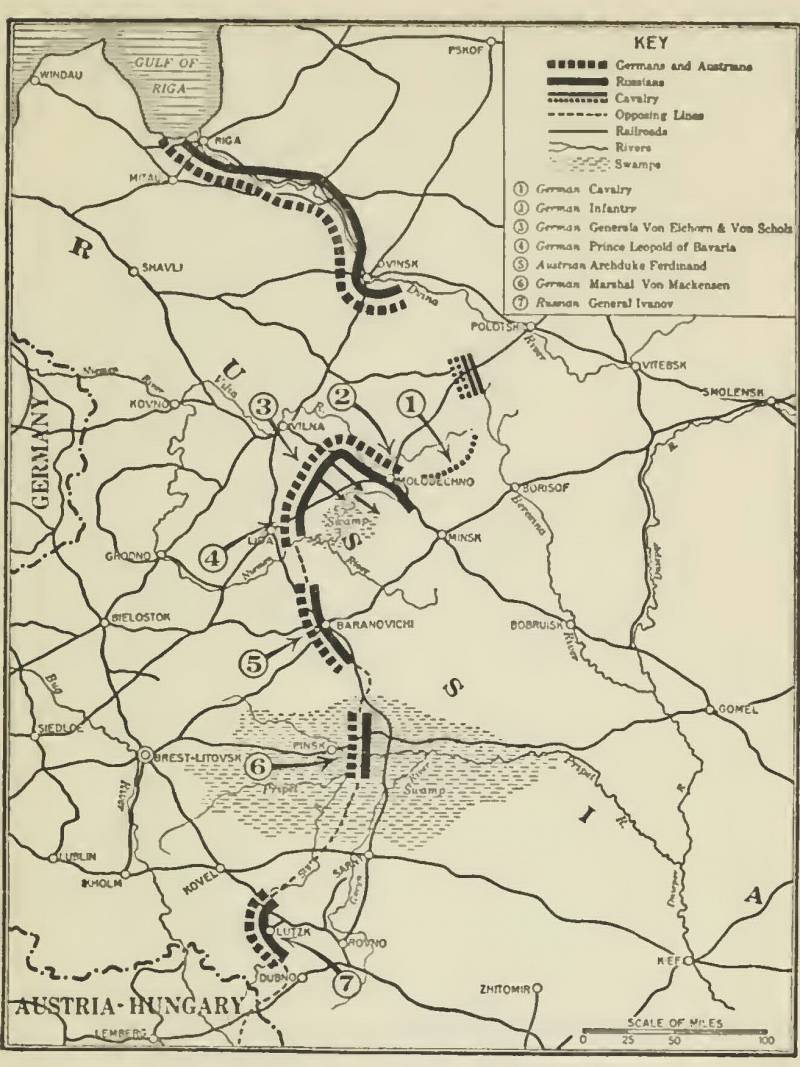 18 schema. Vilna strategic operation and its scope in the context of other operations on the Eastern Front. 31 August - 11 September 1915 d. Washburn S. Victory in Defeat. London, 1916

The Vilensk operation consisted of different in form operations of armies and army groups, very complex not only by their nature, but also by the marginal degree of tension that troops of both sides were subjected to. Stabilization of the front after the retreat — this strategic success of the Russian army was one of the most important consequences of this operation. In operations in the Baltics, only the German 12 army lost in July - August 1800 officers and 80000 soldiers, in October the losses of the Neman army amounted to 15000 people [49]. The essence of the hostilities in the Baltic States was again reduced to the frontal ousting of Russian troops - as well as in the south-western direction, the enemy was unable to carry out operational coverage and rounds in the Cannes style. E. von Falkengine noted in this connection that the Russians had achieved withdrawal in the desired direction. [50].

Given the importance of the Baltic theater of operations for the fate of the Baltic fleet and the operational direction to Petrograd, the military-political leadership of Russia attached special importance to it. It is no accident that the successful outcome of the Vilna operation heralded the beginning of stabilization of the Eastern Front. 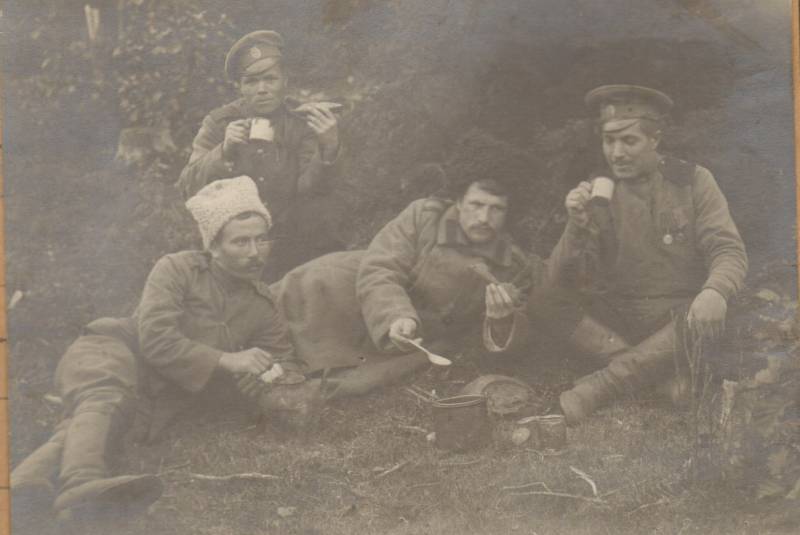 The soldiers are having lunch. Gaso