Russian order in the Middle East 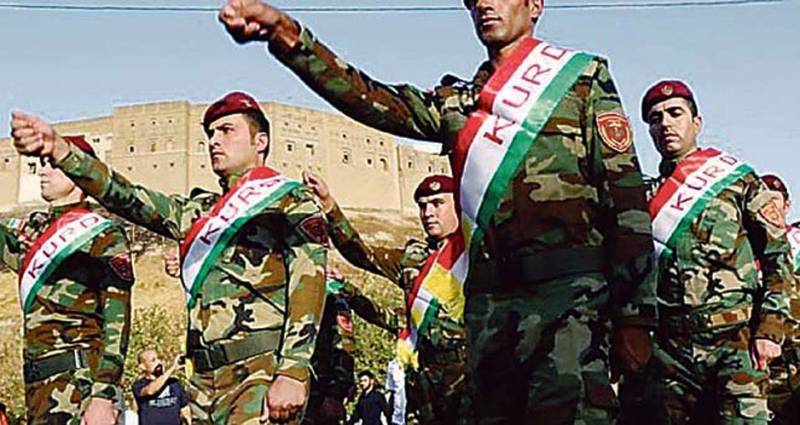 The Islamists suffer one defeat after another, the issue of the post-war arrangement of Syria is all the more urgent. Iraqi Kurds announced a successful plebiscite. The former director of the Israeli special service "Naativ" Yakov Kedmi reflects on how the Middle East is changing, in an interview with the "Military Industrial Courier".

- Jacob Iosifovich, in Syria, in fact, there is a direct confrontation between Russia and the United States. In Ukraine, in the first reading, a law is adopted according to which our country is called the aggressor. The massacre in America - nearly sixty dead and five hundred wounded. What happens in the world?

- The development of events is influenced by certain states or actions.

In relation to the United States: from 1968 to the present day from the firearms weapons there are half a million people killed. Not at war - in ordinary life. The same thing that is happening in Ukraine: the frills that the crazy Rada is doing, what the local politicians are doing, is an attempt to prove their viability. And what, idiotic decisions which are accepted by the American congress, differ by greater rationality? In the US, every senator wants to prove that he is cool, and at the same time he plays back in Russia. Some recently - in North Korea. The same is in the Ukrainian Rada. Nothing new.

And in Syria, what is happening for Russia and went there. The case goes to eradicating the disorder that was perpetrated there with the beginning of the "Arab Spring". It is clear that this is resistance. But the United States has no desire to fight with Russia for Syria, Poland or Ukraine. Only for their interests, and they - in the United States.

- The Americans dump ammunition to the gangs of the IG banned in Russia, but they say that the pilots were wrong. Mina enters the headquarters, where at this moment is the senior leader of the Russian corps of military advisers in Syria. From the bullet of a sniper killed the commander of the brigade of marines. We say: kill the one who will shoot at our people ...

“Why wasn't this sniper eliminated before he shot?” Why is the mortar and those who served it, not destroyed before? Stupid in response to shots to make statements. Russia's military intelligence knows very well what is being done in Syria. To make operational decisions, information is sufficient. What to do in public is another question ... But talking in response to shots is ineffective.

- Plebiscite in Iraqi Kurdistan, about which statements are made in the States that the forty-million people have the right to create their own state, is there no prelude to further American aggression in the Middle East?

- I have not heard the official statements of the US government. Americans are silent about this. No one supported the Kurds, except for the Israeli Prime Minister, and after he received a hat for it, in Jerusalem no figure answered the questions about Kurdistan. Everyone was numb.

The US does not support the creation of an independent Kurdistan, since it means a conflict not only with Iran, Turkey and the entire Arab world, but also with Europe. And the Americans are already in a confrontation with the EU over Iran.
- The King of Saudi Arabia visited Moscow. What caused this trip?

- Not only King Salman came, but almost the entire political, economic, military elite of Saudi Arabia, that is, they "occupied" Moscow completely. This is the result of the fact that Russia two years ago dramatically changed its policy and the Russian Aerospace Forces appeared in the sky of Syria. The actions of the Russian Federation radically changed the situation in the Middle East, and precisely because of its success - political and military - in the SAR the situation in the world became different. Russia is becoming one of the most important states on the world stage, and in the Middle East - number one. Understanding the role, weight and influence of Moscow, KSA abruptly changed the course: you need to negotiate with the Russian Federation, if not friends. Why argue because of some damn "Dzhebhat an-Nusra" (banned in Russia. - M.S.), no longer interested in the Saudi monarch. First: they came to negotiate on the main issue - oil. Two key states in the global black gold market are now on the same side of the barricades - against the United States. And it orders them to coordinate actions.

Second: in the Middle East, the decisive force is the Russian Federation, and the royal house of Saud has the most serious contradictions with Shiite Iran. Relying on US assistance in resolving this conflict is problematic. Moscow has influence on Tehran, Washington does not. But Russia can equally effectively contact both Iran and KSA.

That's why King Salman went to Moscow, brought his high-ranking officials and businessmen. And he said that KSA will cooperate with the Russian Federation on the entire range of problems of the Middle East. This is a sharp turn in the situation in the Middle East region, and I think the changes will be positive.

The USA in the last 20 years played a destructive role in the Middle East and plunged the region into chaos. Russia's intervention leads to the situation stabilizing there. And the negotiations that took place in Moscow on the post-war structure in Syria are part of another process, also initiated by Russia. And Saudi Arabia will use its influence on the opposition so that its representatives sit down at the negotiating table.

Today, Russia defines the future of both Syria and the entire Middle East. And in Saudi Arabia, I repeat, this is well understood.
- Can we say that the war in Syria is coming to an end?

- On the battlefield, the conflict between opposition forces and the government in Damascus is over. With the final liberation of Idlib, political processes will begin, which always crown the war. As a result, as Saudi king Salman stated, KSA supports the idea of ​​keeping Syria united. Who thinks that this country can be divided? Perhaps only American officers who run with the bandits from the "Islamic State" (banned in Russia. - M.S.) and try to somehow drag out a pacification. But the process is not reversed

By the end of the year, I think, Syria will be liberated from the Islamists.

- I’m talking about Syria, because with the departure of the IG, something that no one says today will happen: this is where the American troops stay there. The Syrians have done away with the "Islamic State" and can rightfully say to the Americans - you have nothing more to do here. And Washington has nothing to answer. After that, the Syrians will ask the Kurdish units outside their native habitats to return. It is advisable to voluntarily, without making clashes with the army of ATS. And the Kurds will do it. And then there will be negotiations on the post-war structure of Syria. In all of these scenarios, if the US will be assigned a role, then the minimum. It is not for them to decide about the future of the SAR, it has already been determined by Russia, Turkey, Iran.

“Hezbollah, as well as the pro-Iranian military units, the IRGC fighters and the Turkish troops, will all have to leave Syria.” Only parts of the government army and two bases of the Russian Federation remain - in Tartus and Hmeymim. There will be no foreign troops other than Russian in Syria.

- Let's go back to the referendum in Iraq. Wait for the development of this situation?

- First, a similar referendum in Kurdistan has already been held in the 2005 year, but it did not give a practical result. I think that those who initiated it, the clans of Massoud Barzani and the recently deceased Jalal Talabani, understand that they have no real opportunities to create an independent state. Since the countries on which the existence of the region depends, take an absolutely hostile position on this idea and no one in the world wants to support sovereign Kurdistan.

Kurds, if they have political will and reason, refusing to declare independence, can, using the results of the plebiscite, exchange their decision for very profitable political and economic agreements both with Iraq and with neighboring countries.
“Sometimes I hear a statement that it’s not worth bombing the position of the Islamists, because it leads to the recruitment of new supporters into their ranks.”

- I think this approach is wrong, because the more damage the extremists bear, the less willing to join them. There is no other way to fight terror: you just have to destroy it.

- If Russia returns to the path of socialist development, how to avoid antagonism in the spirit of the Cold War?

- The cold war can only be conditionally called the struggle of capitalism and socialism. It was a war against the USSR, against Russia, regardless of what system was and is there, the current situation only confirms this.

On the other hand, there was such an expression: Marxism is not a dogma, but a guide to action. Based on the Chinese experience and the lessons of the Soviet Union, I think that in Russia they will still be able to create a more effective and responsive political and economic structure for the aspirations of people. It will be different from wild capitalism, the main features of which are ever-increasing exploitation and growing inequality in society.

Also this society will be more free from dogmatism and automatic transfer to the local soil of theoretical approaches developed in other conditions. As an example, the communist regime is established in China, but no one says that it should be associated with such manifestations and perversions as in Cambodia. That is, it is possible to find more effective and humane ways of governing the state for the benefit of all the inhabitants, and not one social and political group.