October 24 2017
41
Russian special forces will receive silent electric motorcycles, the bodies of which are made of composite materials and practically do not radiate heat, which makes them hardly noticeable for radars, according to News. 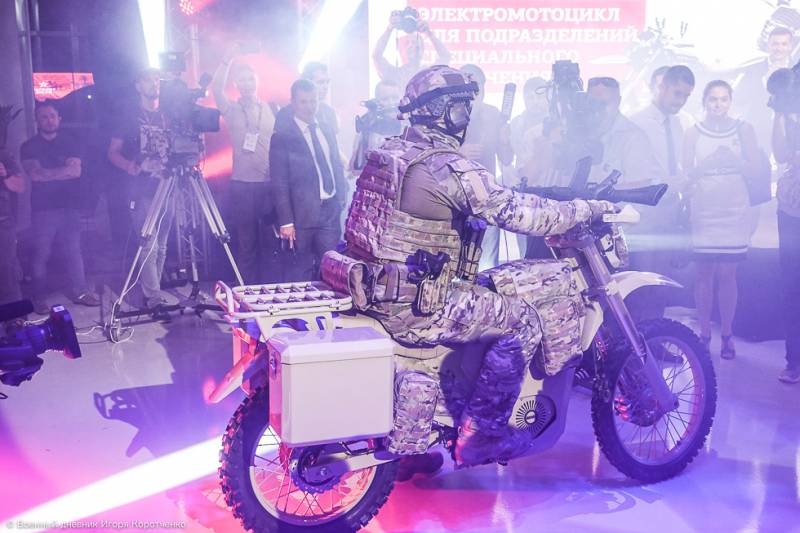 The Defense Ministry told the newspaper that the first batch of new products is already being tested. Soldiers clarify the characteristics of stealth motorcycles, and also conduct exercises to determine the tactical tasks that they can solve.

Not much is known about the new product. The motorcycle is designed to carry one or two people. It provides a mount for personal weapons, equipment, backpacks, as well as radio stations and satellite navigators.

“The motor drives the bike. It provides not only good maneuverability, but also makes the bike noiseless. In particular, already at a distance of several meters to hear it is almost impossible. Also, unlike internal combustion engines, when operating, an electric motor emits much less heat. This is especially important for actions at night when the enemy uses thermal imagers, ”the article says.

Another feature of the novelty is the case with a high proportion of composite materials. It not only withstands significant loads, but also practically does not radiate heat. This makes the bike unobtrusive to radars.

Motorcycles are used in conjunction with cars. When making a raid in the enemy's rear, motorcycle fighters scout ahead of the convoy. Motorcyclists also cover columns from the flanks. Sometimes motorcycle special forces in small groups make raids on enemy targets or conduct reconnaissance. Motorcycles with equipment and supplies can be easily transferred to the desired area, and then evacuated using helicopters.

Currently, motorcycles are actively used by American "green berets", "seals", rangers, fighters of "Delta", as well as military personnel of special forces of the Air Force. Bikes are also used in the British SAS regiment, in the German special purpose group KSK.