October 23 2017
14
A few days ago, a US representative accused Russia ... of no less than nothing - of “military actions” against her country. What is it? Is the representation in the theater of the absurd or similar accusation even the slightest basis? 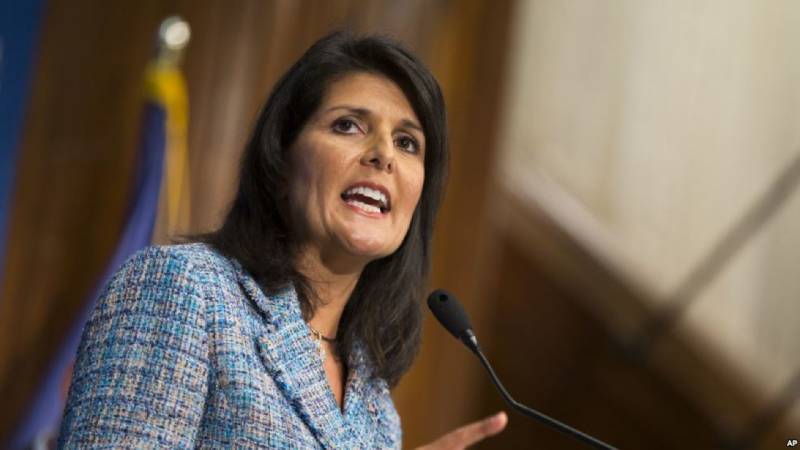 As stated by the US Permanent Representative to the UN Nikki Haley, "when a country can intervene in another country's elections, these are hostilities. This is true because you are trying to undermine democracy, replacing the will of the people with the dissemination of false information».

It is not the first time that Russia’s accusations have been voiced as if it had interfered in the US presidential election in 2016 with hacker attacks. Only such fabrications sounded, as a rule, from the opposite camp. - from the camp of the losing Hillary Clinton. Allegedly, her rival Donald Trump won the election thanks to the omnipresent “hand of Moscow”, which “reached out” ...

So in a matter of days before the scandalous statement of Nikki Haley, Mrs. Clinton, while in Britain, reiterated that Russia “wanted her to lose the election” because of “personal dislike” and also for “undermining NATO, the European Union, and stability in USA".

It is strange, however, to hear such accusations from the lips of not Clinton, but of Hayley. Considering that if Trump had not won, then she would not have taken such a high post. What is it? Nicky, wanting to “kick” Russia, now, voluntarily or involuntarily, “kicks” his own boss, who appointed her to the post of UN envoy? After all, if we recognize Russia's intervention in the American elections and compare them with the previously voiced accusations, then, it turns out, Trump is not a legitimate president, but raised by Russia? Yes, and almost with the help of "military aggression" ...

But still more interesting. Now Trump also hints that Russia has interfered in the course of elections in the United States. According to him, the social network Facebook opposed it. And it sounded amid claims in the United States that Russia paid Facebook some advertising materials to influence the outcome of the elections. It seems that there, over the ocean, they are already completely confused about who, nevertheless, was supported by "insidious" Moscow.

If you listen to Nikki Haley, then Russia intervened not only in the American elections, but also in elections throughout Europe, including in France. "Look at France and other countries. They do it everywhere. This is their new favorite. weapon. And we have to cope with it."- She said in the blue eye.

The question is, what does “cope with this” mean? It looks like a valuable admission that Washington itself is going to intervene in elections in these countries.

If only one interference in the elections is (as follows from the words of Haley) “military actions”, then what should we call the real military actions that Washington has repeatedly led in different countries of the world to change their leadership?

And here you can remember the serious crime of the United States and its allies against one of the countries of the world. It's about the murder of Libyan leader Muammar Al-Gaddafi. Just from the day of this monstrous murder was six years old ...

The main culprit behind this atrocity is the person allegedly "felled" by Russia in the US presidential election. The same Hillary Clinton, who wonders why in Russia she is “personally disliked” ...

Six years ago, October 20 2011, Clinton shouted "Wow!", Seeing on the phone footage of a monstrous massacre of the leader of Libya.

Then in the United States talked about the "victory of democracy." Now this “victory” is preferred not to be remembered, so as not to disgrace once again.

The current US administration continues the same predatory policy towards other countries. From the lips of representatives of this administration there are not only accusations of “interfering with elections” (for all their absurdity).

Last week Russia - for the umpteenth time! - unproved accused of killing civilians in the Syrian province of Idleb. At the same time keeping silent about how many civilians died from the actions of the American "coalition" in Rakka ...

However, if you listen to gentlemen from Washington, then Russia and Syria are “guilty” of “obstructing the release of Raqqa”.

And who is guilty of the fact that the terrorists in general occupied this city? Who opened the "Pandora's box" in Libya, and then - in Syria?

And they accuse us of hacking attacks of some kind or buying political advertising on Facebook ...

Ctrl Enter
Noticed oshЫbku Highlight text and press. Ctrl + Enter
We are
Situational analysis of the death of the MH17 flight (Malaysian Boeing 777), made on the basis of engineering analysis from 15.08.2014Bashar al-Assad: In Syria, not the “revolution” that the enemies are talking about, but the revolution of the army and the people against terrorists
Military Reviewin Yandex News
Military Reviewin Google News
14 comments
Information
Dear reader, to leave comments on the publication, you must to register.