Europe bucked in the face of surprised America

October 23 2017
14
Last week's summit of EU leaders called for the unconditional implementation of the agreement on Iran’s nuclear program. RIA "News"Quoted the summit's final statement on this issue:" The European Council reaffirms its obligations under the Iranian nuclear agreement and supports the statement made by the Foreign Affairs Council on October 16. 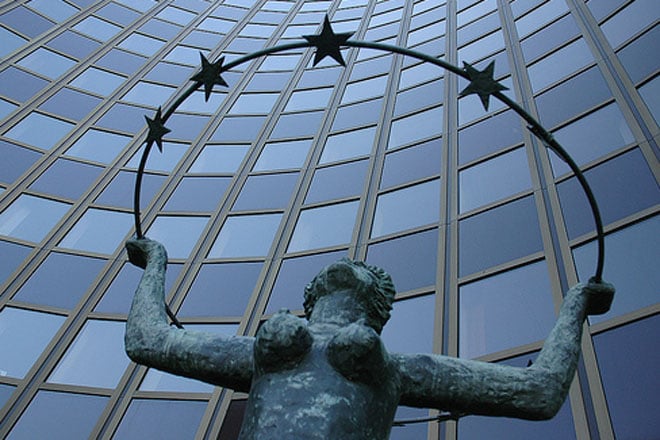 Nuclear deal with Iran as an apple of discord

In this statement, the EU foreign ministers called on the United States to continue implementing the Joint Comprehensive Action Plan (IPAP) with Iran, better known as the “nuclear deal.” The Council suggested to the Americans: before taking further steps to abandon this agreement, take into account its implications for the security of the United States, their partners and the region.

The High Representative of the European Union for Foreign Affairs and Security Policy Federica Mogherini also spoke on this important issue. She noted that the deal with Iran was not bilateral, but was the result of the agreement of the leading countries of the world. (Recall, the UFID was concluded in the regime - Iran on the one hand, and Russia, China, the United States, France, the United Kingdom and Germany - on the other.) “We, as an international community,” British agency Reuters quoted Mogherini’s words, “can’t afford eliminate a working nuclear deal. "
Europe is angry. After US President Donald Trump announced his intention to revise the agreement on the Iranian nuclear program and tighten the requirements for Iran, European leaders and EU officials held a number of consultations with representatives of the US administration, but failed to achieve a revision of the policy declared by Trump.

There is a lot of evidence. A few days ago, the adviser to the US president on national security, General Herbert McMaster, spoke in favor of continuing the political course to break the agreement with Iran. Speaking at the Washington Democracy Foundation, McMaster accused Iran of "destabilizing behavior and harmful activities, including material and financial support for terrorism and extremism," in support of the government of Syrian President Bashar Al-Assad.

In addition to these sins of Tehran, the adviser to the US president added "rampant hostility against Israel," "threatening navigation in the strategically important Persian Gulf," "cyber attacks on the United States, Israel, American allies and partners in the Persian Gulf, a total violation of human rights, arbitrary detention of foreign citizens under false pretenses. ”

It turned out quite a solid list of claims of the Americans against Iran. In Europe, they generally agree with him. About this after the summit in Brussels, said German Chancellor Angela Merkel. Merkel also called Tehran’s policy in the Middle East “counterproductive” and criticized Iranian authorities for interfering with the situation in Yemen.

However, this did not prevent the German Chancellor from condemning the plans of the Trump administration to curtail the nuclear deal and to declare their support for the UFID. “We want to continue negotiations with the US Congress and try to do everything to preserve the agreement,” Tass reports Merkel after the summit.

It should be noted that in relation to the deal with Iran, the summit of EU leaders showed an enviable unanimity, which cannot be said about other issues of relevance to Europe that were discussed at the same meeting. What caused this unity? The answer must be sought in the reasons that prompted the leading countries of the world to conclude a Joint Comprehensive Action Plan with Iran.

Instead of a military nuclear program - the peaceful atom

This plan was signed in July by 2015. He summed up the many years of struggle, above all, the nuclear powers against the atomic military program of Iran. She pretty nerves of world leaders. And the Iranian nuclear project began quite peacefully. It was still in the middle of the last century.

Then the Western countries willingly helped the shah of Iran Mohammed Reza Pahlavi to carry out the so-called “white revolution”, that is, to modernize the country and the economy. A large role in this was assigned to the peaceful use of atomic energy. Here the Americans said their word. They concluded a cooperation agreement on the Atoms for Peace program with the Shah.

As part of this program, a nuclear research center was established at Tehran University. The Americans installed their 5 megawatt reactor in the center, “hot cells” capable of producing up to 600 grams of plutonium annually, supplied fissile materials for research purposes.

That was the beginning of the creation of the scientific and technical base of Iran's nuclear power industry. Later, the international consortium “Eurodif” with the participation of the French, Spaniards, Belgians and Italians joined the case. The consortium provided Tehran with access to enrichment technologies and provided training to Iranian scientists and engineers.

Important milestone in stories Iran’s nuclear program was the construction, together with French specialists, of a second research center in Isfahan and a nuclear power plant southeast of Bushehr, at which the West German concern Kraftwerk Union began work.

Iran at that time was a bona fide participant in all international agreements on the peaceful uses of the atom and non-proliferation of nuclear weapons. weapons. Everything changed after the overthrow of the Iranian Shah in 1979 and the declaration of the country as an Islamic Republic. The country's nuclear programs, as well as the construction of nuclear power plants, were suspended, curtailed or frozen.

In the mid-eighties, during the war with Iraq, Iran’s religious leaders revised their plans. In Tehran, they learned about the attempts of the Iraqi leader Saddam Hussein to acquire a nuclear bomb and began to search for such weapons themselves. To this end, the Iranians entered into negotiations with Pakistani generals and nuclear scientists.

For bombs, Iranian leaders offered billions of dollars, but negotiations, according to the Washington Times, ended only with the acquisition of blueprints and several centrifuges to enrich uranium. The same newspaper reported that after the collapse of the Soviet Union, Iran secretly acquired three nuclear warheads in Kazakhstan and a certain amount (the exact number is not specified) of the same ammunition in Ukraine.

The Washington Times is known for its "exaggerations." Therefore, not all experts agreed with her information. However, many do not deny Iran’s potential possession of nuclear warheads. The argument is confirmed by international experts that there are more than a thousand centrifuges in Iran’s nuclear centers for the production of highly enriched uranium.

Tehran’s accusation that he is secretly carrying out work on the creation of nuclear weapons, the Americans, referring to their intelligence data, were voiced in 2003. Since then, this topic has become one of the central in international relations. Iran was entangled with a web of sanctions, but they could not stop its nuclear program.

In addition, the world began to receive unpleasant news from Tehran that Iran is actively developing means of delivering atomic weapons. In 2006, he tested a medium-range missile with a range of 1700 kilometers. Tests continued in subsequent years. She grew a range of missiles, there were separable warheads.

When the range of Iranian missiles approached 2000 kilometers, Israel, who was in the area of ​​a possible missile strike, was the first to get excited. Other countries in the region, including Europeans, were taken care of, the threat to which was becoming very real. It was in 2013 year and coincided with the change of power in Iran.

The new Iranian president, Hassan Rouhani, turned out to be more negotiable than its predecessors. However, it took the world community two years to stop Iran’s nuclear program and put it on a peaceful track. As a result of tense negotiations, the Joint Comprehensive Action Plan was agreed and fixed.

The 20 plan for years has opened up access to Iran’s nuclear facilities for the International Atomic Energy Agency. It became possible to ensure that the Iranian nuclear program was of an exclusively peaceful nature. The Fordo Fuel Enrichment Plant was transformed into a nuclear physics research center without uranium enrichment capacity. Iranian nuclear facilities were not dismantled, but the accumulated enriched uranium was exported abroad.

These are the main provisions of SVPD. An important component of it was the lifting of sanctions by the UN Security Council, the United States and the European Union. Over the years, a puffy portfolio of bans on interbank business, foreign direct investment, export of refined products, financial transactions, restrictions on contacts with Iranian companies and much more has accumulated.

When the joint plan began to operate, the sanctions began to be lifted gradually. However, this February, the United States launched a new anti-Iran campaign and presented Tehran with another portion of sanctions. The new prohibitions were in no way connected with the Iranian nuclear program, as no one recorded violations of the FIDD.

The Americans stirred up another - the activity of Iran in the region. In detail all the claims of the United States, we have already seen in the execution of General Herbert McMaster. 8 of Iranian companies accused of having links with terrorism came under sanctions. More on 17 companies introduced restrictive measures due to their participation in the development and production of ballistic missiles.

As you can see, none of the above is listed in the SVPD agreement list. Europeans sluggishly protested after the new sanctions of their senior partner. Tehran has shown that it is necessary to protest more actively. At the end of September, he conducted successful tests of a new medium-range ballistic missile, the Khorramshahr, which can already “cling” to the southeast of Europe.

European leaders immediately recalled their responsibility to their peoples and bucked right in front of surprised Americans, insisting on the implementation of SVPD. An example to follow. Because the success of all future international agreements depends on how honestly the previous ones are carried out.

As we know, Americans have never been a model in the fulfillment of their obligations. Russian President Vladimir Putin vividly recalled this in his speech at the Valdai Forum in Sochi. Time demands to change the arrogant attitude towards agreements affecting the interests of purely regional and small countries. In Europe, this was understood to the apparent bewilderment of overseas partners. It now remains to follow the new movements of American hands and see what lesson the US will learn from the demarche of EU leaders ...

Ctrl Enter
Noticed oshЫbku Highlight text and press. Ctrl + Enter
We are
Haley: US insists on IAEA inspections of Iran’s military facilitiesResults of the week. “Look, the whole face is black! Have you ever read Moidodyr? ”
Military Reviewin Yandex News
Military Reviewin Google News
14 comments
Information
Dear reader, to leave comments on the publication, you must to register.