Is Israel supplying weapons to terrorists - fact or fake?

October 20 2017
77
On Thursday, the telegram channel Directorate 4, which tracks events in Syria, published a video of an artillery fire exchange with government forces. The close-up shot of 107-mm anti-aircraft guns, which lie in Hebrew inscribed boxes, newspaper writes Look. 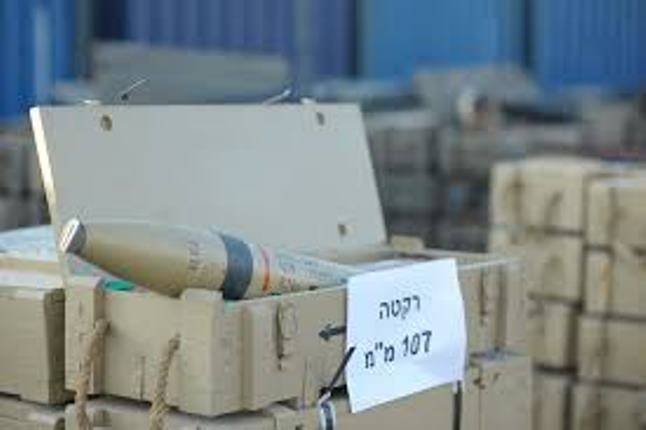 It is noted that this is “not the first confirmed fact of the supply” of weapons to militants. It is also alleged that Israel in its territory treats wounded terrorists.

“However, even a cursory, superficial analysis of the record shows that the Telegram channel used the video, which was distributed in the world media in early September. The notes to the entry mentioned that one of the units of the Free Syrian Army in the western suburbs of the city of Deraa leads the battle with the regular army, ”the material says.

True, no evidence that weapon put it the authorities of Israel, is still not. Usually, only photographs of weapons or ammunition boxes with Hebrew inscriptions were published. By the way, the Israeli press itself did not shy away from reprinting these news from Syrian agencies.

Recently, weapons, ammunition and communications equipment of Israeli origin has been reported in the provinces of Homs and Hama. Mortars, machine guns, 800 shells and 10 thousand ammunition of various calibers were found as trophies in a network of underground tunnels, which the IS militants dug (prohibited in the Russian Federation).

"This kind of message is intended to strengthen the suspicion that Tel Aviv is supporting igilovtsy in Syria, and at that moment when not only the Syrian, but also the Russian army are fighting with them," the article notes.

Israel manufactures weapons and ammunition and sells to many countries. We produce ammunition and weapons, which were produced in the Soviet Union,
explained the publication of the former head of the special services "Nativ" Jacob Kedmi.

According to him, "ammunition and weapons could really get into Syria, but only through third countries, starting with the countries of Central Europe and ending with the United States, which purchased weapons for certain forces."

We have never directly supplied arms to any of the groups that are fighting in Syria. If something from what we bought from us, through the second or third hands somehow got into Syria? It may be
said kedmi.

If ammunition is made in Israel, then there may well be inscriptions in Hebrew. Especially if they were stolen from the warehouses of the Israeli army,
added on.

Kedmi is convinced that the inscriptions in Hebrew, on the contrary, prove the inability of the Jewish state to supply.

If they wanted to arm some illegal groups, and in such a way that no one would know that they were Israeli ammunition, then there would be no inscriptions and in general would accept that this was done in Israel,
said the former head of special services.

This, in his opinion, is done to discredit the Jewish state.

Erdogan recently blamed the Israeli Mossad for provoking a referendum in Iraqi Kurdistan. Such accusations are needed to once again cause hostility towards Israel in the Arab world and among the Turkish population. On the other hand, it is an attempt to discredit the Kurds themselves, they say, their vote is a provocation of external forces,
recalled Kedmi.

So there is the usual propaganda war. No one says that Israel should not make a complaint. But to make such claims? What is Israel creating ISIS or working with it, arming it? There is no limit to propaganda. You can write any nonsense
he concluded.