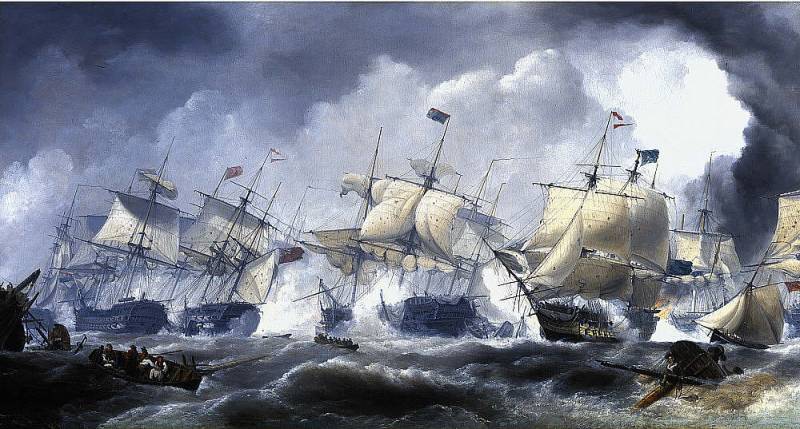 Exactly 220 years ago, on October 11, 1797, the Battle of Camperdown took place - the last battle of the Dutch sailing fleet. In this battle, the Dutch suffered a crushing defeat from the British, as a result of which the Netherlands forever lost the status of a strong sea power. And once they fought with Britain almost on equal terms and more than once prevailed in sea battles ...

In 1797, Holland was called the Batavian Republic and was an ally of revolutionary France. The English squadron of Admiral Duncan for several months blocked the Dutch fleet in the ports of De Helder and Texel, not allowing it to join the French fleet to support the French-planned landing operation in Ireland.

But at the end of September, British intelligence reported that the French had canceled the operation due to the approaching period of the autumn storms. Duncan was ordered to lift the blockade and withdraw his ships to British ports. Seeing this, the commander of the Dutch fleet, Admiral Jan de Winter, nevertheless decided to go to sea. According to some data, he wanted to go to Brest and unite with the French there, according to others - he planned to break the English merchant shipping in the English Channel and seize several merchant ships for the sake of premiums.

However, the exit of the Dutch fleet from Texel and De Helder immediately spotted the English high-speed cutters Active and Black Jock left to watch him. The information was promptly delivered to Duncan, and the latter, after some thought, decided to take the risk and attack the Dutch on his own initiative. He ordered the squadron to rotate 180 degrees and move to the intersection of de Vinter.

Dutch outposts - sloops “Cerebus” and “Delft” noticed the enemy on time and reported his approach. Assessing the strength, de Winter realized that his chances are slim. Duncan had 14 battleships, and he had 11; moreover, the English battleships were larger than the Dutch and carried more heavy guns. True, the Dutch had 15 frigates and sloops, and the British had 10, but it was better not to engage in a firefight with battleships of these “lightweights”.

The Dutch admiral ordered a retreat to be stolen among the coastal shallows, but the British did not allow him to leave. Taking advantage of their favorable wind direction, they attacked the enemy at full speed in two groups, one of which crashed into the front and the second into the back of the Dutch wake column.

Duncan ordered all captains to act on their own and choose their own goals. Having passed through the gaps between the Dutch battleships, a part of the British came in from the reverse side and took the enemy in two flames.

Despite shelling from both sides, the Dutch stubbornly fought off, causing serious damage to several English battleships, but the advantage of the British in the caliber of guns and the training of gunners soon made itself felt. About an hour later, the Dutch ships, broken by their cores, began to surrender one by one. On the flagship battleship of de Winter "Freyheyd" ("Freedom") all the masts were shot down and the sides were riddled. Dozens of officers and sailors, including the captain, were killed, but de Winter himself, standing on the upper deck, miraculously remained unharmed.

At his command, who lost the course and squeezed between two British ships "Freyheyd" after two hours of battle, lowered the flag. The battleship "Hercules" broke out from hot kernels, and its captain ordered to throw all the gunpowder overboard in order to avoid an explosion. It was possible to extinguish the fire by the heroic efforts of the crew, but only so that the remaining unarmed ship surrendered.

By dusk it was all over. De Vinter, delivered under escort in a boat to Duncan's flagship battleship Winerybel, presented his sword to the enemy admiral. He nobly left personal to the defeated enemy weapon. In addition to "Freiheid" and "Hercules", five more battleships and four frigates became trophies of the British, however, two of them were beaten so badly that they could not reach the English coast and sank when towing.

The losses of the Dutch in manpower are estimated at 540 killed, 620 (according to other data - 924) wounded and several thousand prisoners. The British had no losses in the ships. The victory cost them 244 dead and 720 injured, that is, even more than they lost in the famous battle of Abukir.

The disaster at Camperdaun significantly weakened the fleet of the Batavian Republic, and most importantly - it undermined the morale of the Dutch sailors. In the future, the Dutch were simply afraid to engage in battles with the British, which had never happened before. Two years later, the shameful “Vietnamese incident” resulted when 12 of the Dutch battleships, caught up in the sea by the Anglo-Russian squadron under the command of Vice Admiral Mitchell, refused to fight and capitulated without a single shot. However, this is different история. 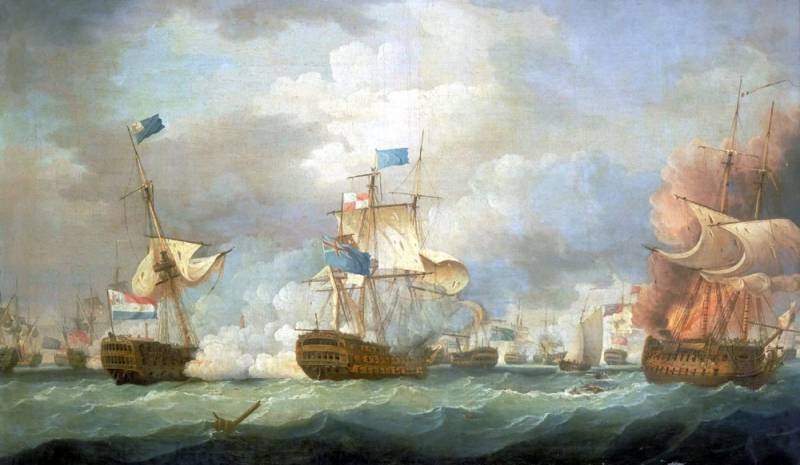 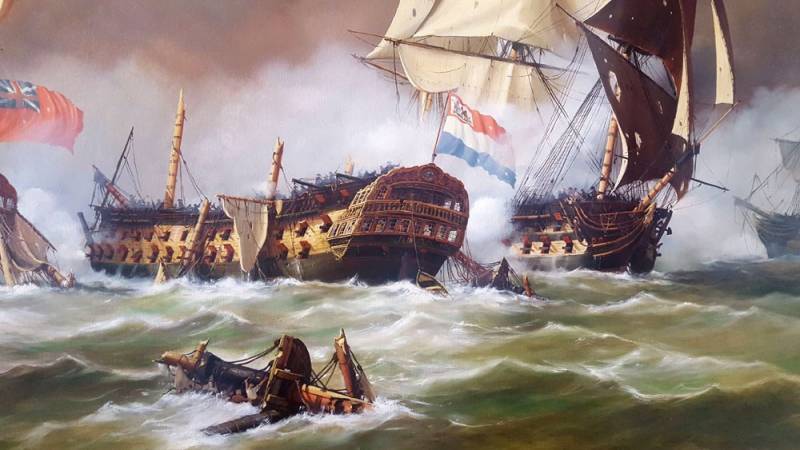 Fragment of a picture of Anton Lawrence with the same plot. In the center - shot, but not yet lowered the flag "Freyheyd", on the right - "Wineries". 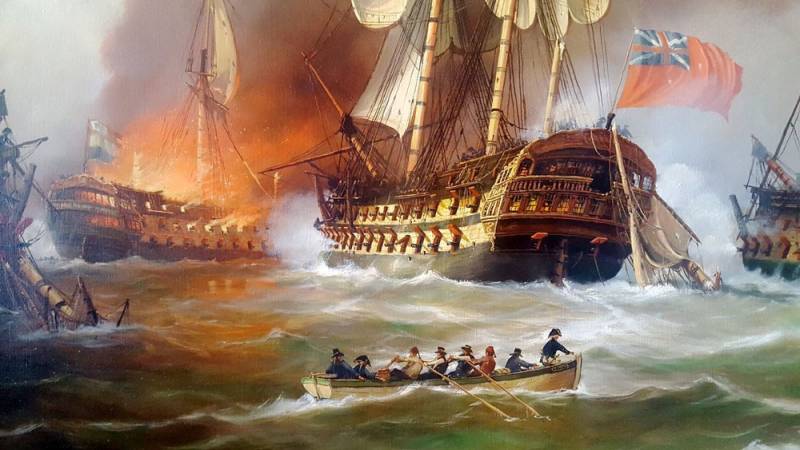 Another fragment of the picture of Lawrence, which depicts the English battleship "Monmouth" and the burning Dutch "Hercules", with which the artist seems to have overdone it. It is unlikely that the team would be able to extinguish such a strong fire. 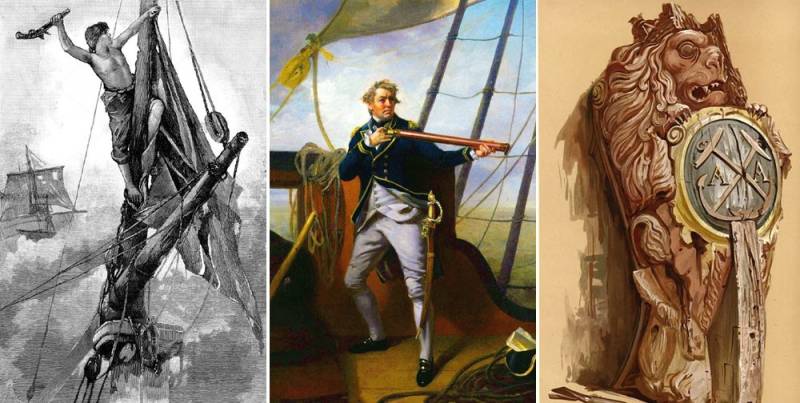 On the left - a brave English sailor Jack Crawford from the battleship Wineryl. When the flag was blown off on this ship, Crawford climbed onto the mast and nailed the cloth with nails, using a pistol as a hammer.
In the center - Admiral Duncan, during the Camperdaun battle, aims at the Dutch from a telescope.
On the right is the nasal decoration of one of the Dutch battleships captured by the English. 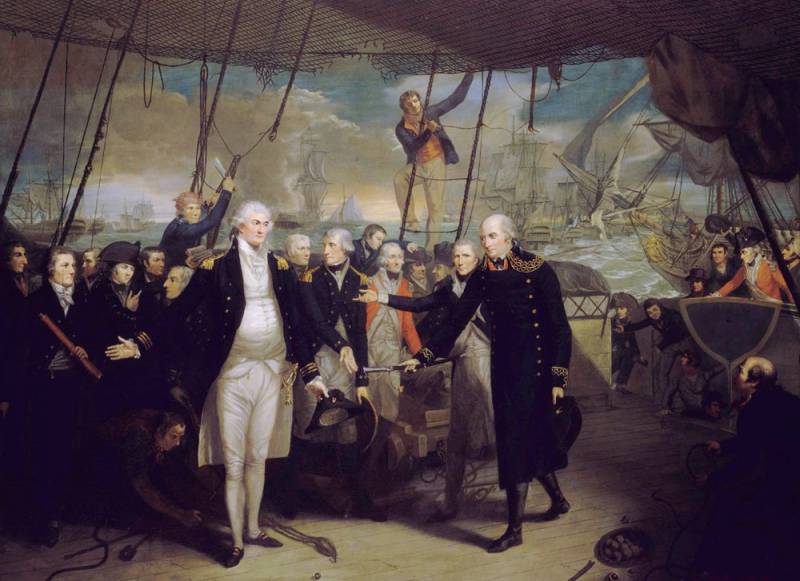 De Winter gives his saber to Duncan, and he refuses to accept it, the picture of Daniel Orme.