March 24 2012
28
24 March 1791, a year after the Second Division of Poland between Russia and Prussia, the national hero of the Poles Tadeusz Kosciuszko solemnly announced in Krakow the beginning of an anti-Russian liberation uprising.


Relations between Russia and Poland could never be called friendly. In the crisis years, the nobility certainly used the situation and mercilessly robbed Russian cities, seized territory. In difficult and crisis times of decline, Poland always turned to the Russian state for help. Such stable hostile behavior has been characteristic of the country in question for many centuries, and modern politicians should take it into account. Today we will talk about the revolt of Kosciuszko and the suppression of his Russian troops, in which the brilliant commander Suvorov played a special role. 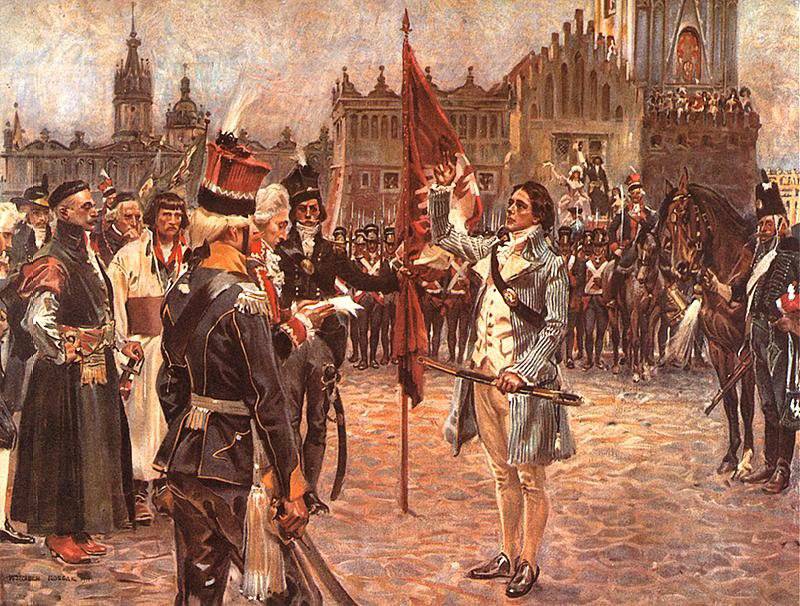 Kosciuszko swears on the square in Krakow. Wojciech Kossak

Today, there is a whole line of historians who hysterically declare that the immortal glory of Suvorov is not completely deserved, that this person is nothing more than a butcher, a destroyer of freedom and a champion of serfdom. Let's face it, such hysteria is nothing more than a product of Russophobia, which has now become active in Europe. Russophobia is especially characteristic of statesmen seeking to divert public attention from their own failures and mistakes.

In 1791, anarchy in Poland reached unbelievable proportions. The freedom-loving nobility increasingly ignored royal decrees and decisions and abused their right to disrupt the Diet, such behavior prevented the strengthening of the country's power. The attempt to introduce a new constitution by the powerless king Stanislav Poniatowski provoked the indignation of the Polish petty nobility, and already in 1792 a confederation was formed. At the general meeting of the Confederates, the Constitution was abolished, and the power of the king was no longer recognized. It's amazing how short-sighted the Polish nobles turned out to be, because their behavior was not only beneficial to the Russian Empire, but put the state on the verge of annihilation. As a result, two main opposing blocs were formed: the supporters of the new Constitution and the Confederates.

Preparation of the uprising was carried out a lot earlier, and such famous people as General Jialynsky, the merchant Kapostas and others were involved in his organization. The scale of the uprising was in the nature of a civil war, since even peasants, armed with pitchforks and scythes, came out from the rebel side. Catherine II, despite her correspondence with such thinkers as Voltaire, supported the Confederates by sending Russian troops to Poland. Russia needed an exceptionally weak Poland with a puppet king.

On the part of the rebels, or, as they were called in Poland itself, the insurrection, the well-known Tadeusz Kosciusko spoke as commander. This uncommon person considered his homeland to be the Commonwealth, but was subject to the influence of revolutionary French ideas. His fate is full of amazing adventures. He participated in the US Civil War, where he established himself as a talented and decisive commander, was attracted to the leadership of Polish troops, and had contact with revolutionary France. Kosciusko enjoyed special confidence from insurgents and ordinary people, and legends about his courage and luck in military enterprises of this man. It was a worthy opponent of the Russian commander Suvorov.

The ideas of Tadeusz Kosciuszko were much broader than the original goals of the rebels, taking command, he took the oath not to the gentry, but to the Polish people, therefore he intended to defend the interests of all social strata of the country. Such a leader was extremely dangerous both for the nobility and for the Russian sovereigns. Kostiushko was well versed in politics and understood that the only worthy path for the development of Poland was power and freedom. He agreed to lead the army on the condition that freedoms would be granted not only to the gentry, but also to ordinary citizens of the country. He joined the rebels and the Polish king, hoping to maintain his power and position. More specifically, it was the Confederates who were the rebels, since theoretically the head of state was on the side of the troops Kosciusko. 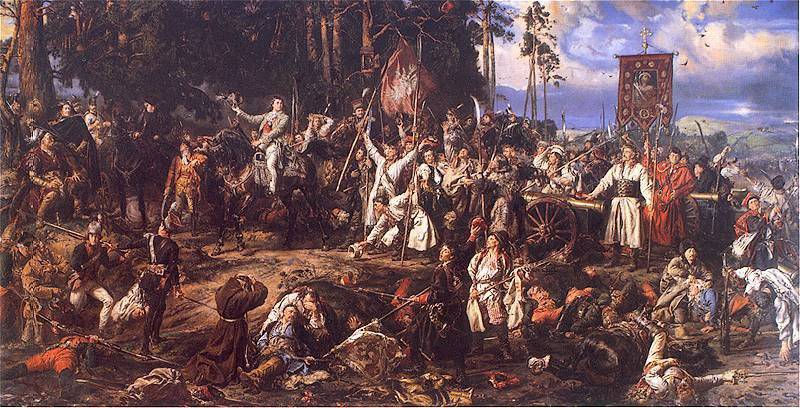 16 March 1794 of the year Kosciuszko in Krakow was proclaimed dictator of the new republic, after which the Act of Uprising was drawn up. Kostushko’s election was supported by General Madalinsky, defeating the Russian detachment and seizing his treasury. Russian military forces under the command of Tormasov and Denisov entered the territory of Poland in order to defeat the rebels, Prussia did not stand aside. The Russian failures under the Raczlawitz shook the entire Polish population. Under the influence of this news, an uprising broke out in Warsaw, as a result of which a Russian garrison was defeated in the city. The insurgency was repeated in Vilna under the leadership of Yasinsky, only a part of the Russian detachment was able to escape from the city, and the Insurgents signed the Insurrection Act of the Lithuanian people.

The rebel army quickly increased, the call was announced throughout the country. The revolutionary promises of freedom attracted not only well-equipped gentry, but also simple peasants who had weapons only scythes, knives or pitchforks. The main building numbered up to twenty-three thousand people, and the total number of the army was not less than seventy thousand rebels. From the Russian side, Saltykov’s army acted, defending the territories annexed from the Polish state against capture, and the corps of the glorious Suvorov hurried from Turkey. From the side of Prussia, more than fifty thousand people spoke and at least 11 thousand defended the borders of the state. Austria, which sent troops to 20 thousands of soldiers, did not stay aside. The Russian army numbered just over forty thousand people.

The tactics of the rebels were primitive and similar to the movement of the crowd, swept away on the way of the enemy. There were no professional military commanders among the rebels, so all the luck was based on numerical superiority and surprise. However, when the war passed into the stage of long-term confrontation, and the Confederates somewhat mastered the situation, Kosciusko felt an acute shortage of weapons, competent strategists and commanders. The peasants simply did not know how to fight, and numerical superiority turned more likely to a disadvantage, since there was no one to manage the great host.

The few Russian troops shied away from the battles with the injector, however, connecting with large parts, immediately went on the offensive. So did Denisov, uniting the forces entrusted to him with Prussian troops. At the same time, Krakow was taken, which was a serious blow to the forces of Kosciuszko. Derfendel defeated the rebels under the command of the hare and occupied Lublin, and Repnin was located near Vilna. Repnin, however, did not take any decisive action, waiting for Suvorov’s approach. Austrian troops occupied Krakow, and also took the cities of Chelm and Sandomierz, but did not dare to enter the fighting, since their main goal of their government was to participate in the division of Poland, and not victory. The rebels slowly but retreated to the Vistula, but they took Bromberg.

The approach of a small detachment was the beginning of the brilliant victories of the Russian troops. September, the Suvorov detachment took Kobrin from the turn, the next day inflicted a crushing defeat on the enemy superior to him in numbers and artillery under Serakovsky, the 4 successfully crossed the Bug River. Suvorov acted with lightning speed, not giving the opponent time to think about his actions, and by September 7 had finally broken Serakovsky’s corps, which was almost twice as good as the Russians. After that, the rebels began to evade clashes with Suvorov and directed all their efforts to reinforcements rushing towards him.

However, it was impossible to stop the Russian commander, he soon connected with the forces of Derfendel, as well as Fersen. At the disposal of Alexander Vasilyevich, 22 already had thousands of people, which allowed him to deploy an active offensive company. A crushing blow followed the Mare, then Prague was taken, the last to surrender to Warsaw. Suvorov rushed through the Polish land tormented by military clashes and never lost. His losses were minimal, while the rebel army lost thousands of people. 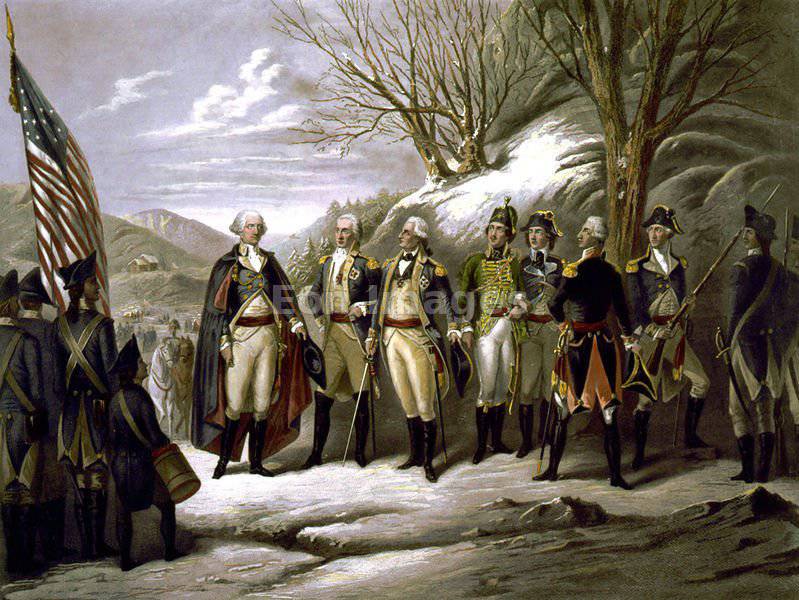 Frederick Hirsch (1821 – 1895). “Heroes of the Revolution” (between 1850 – 1890). Kostyushko is fourth on the right. In America, Tadeusz Kosciusko was awarded the Order of Cincinnatus, established by George Washington (George Washington, 1732 – 1799), who highly appreciated the services of the Pole. Illustration from the archives of the Library of Congress

King Stanislav was sent to Russia at the end of December, where he laid his crown at the feet of the empire. Poland lost sovereignty completely. Tadeusz Kosciuszko was captured shortly before the final surrender of the rebels. He was sent to Russia and imprisoned in the Peter and Paul Fortress, where he lived as a guest in the house of the commandant, although he was considered a prisoner. Pavel I released Kosciusko. Alexander I even offered him to join the new Polish government, but he refused, motivating his decision by saying that the state’s borders had not been fully restored. The last days the instigator of the uprising ended in the Swiss town of Solothurn, far from home. His ashes were nevertheless reburied in Krakow, and the Polish people still consider him a national hero.

The outcome of the liberation uprising for Poland was sad. The state lost its sovereignty and was divided between Russia, Prussia and Austria. Despite the great experience and potential of Kosciuszko, the uprising was not organized, as a result of which it suffered a crushing defeat, the national spirit fell, and the country ceased to exist. Gradually, the Polish people were again united, but this path took centuries.

Ctrl Enter
Noticed a mistake Highlight text and press. Ctrl + Enter
We are
Congratulations on the 285 anniversary of the birth of the Great Russian commander Alexander Vasilyevich Suvorov!Decomposition of Polish statehood. Rise of Kosciuszko. Part of 4
28 comments
Information
Dear reader, to leave comments on the publication, you must to register.