August 31 2017
71
The SM-6 shipborne multi-role missile tested in the United States does not represent a radical threat to actively maneuvering Russian missiles, but it is dangerous for single ships of the Russian Navy, leading RIA News the comment of the expert of the center for military-political studies at MGIMO of the Russian Foreign Ministry Vladimir Korovin. 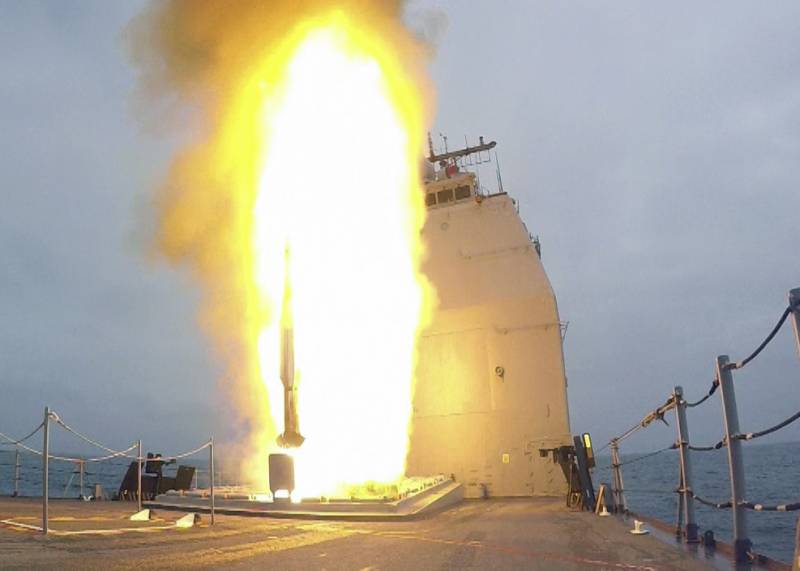 The US Missile Defense Agency recently announced the second successful test of the SM-6, which intercepted a medium-range ballistic missile launched from Barking Sands.

“Now we will continue to develop anti-missile defense technologies in order to anticipate emerging threats,” said Agency Head Sam Greaves, calling the test “a key milestone in the development of American missile defense.”

Modern Russian missiles, so to speak, short-range type "Iskander", have the property of vigorous maneuvering at the start and end of the flight. The American SM-6 does not work on intensively maneuvering targets. It, of course, complicates the task of Russian ballistic missiles, but does not pose a radical threat to them,
Korovin said the agency.

He noted that the SM-6 is “a kind of multi-purpose rocket,” and when used as an anti-ship, its task is to go on a ballistic trajectory and attack the ship vertically.

She "flashing" the ship from top to bottom. Vertically shoot up today not many systems can. Here is a neighboring ship on this attacking missile can work, but not attacked. That is, for a single ship, this rocket poses a certain danger,
The expert explained.

According to him, the SM-6 rocket has been in mass production for about four years.

It is made at the new plant, which is located in Alabama. This long-range anti-aircraft missile - the so-called over-the-horizon - is capable of operating at a distance of more than 350 kilometers. The mass of its warhead - 125 kilograms. The solution to the problem of intercepting ballistic missiles for her is not the main, but the additional (task)
told Korovin.

In his opinion, the SM-6 task of intercepting medium-range ballistic missiles is a continuation of the program for the end of the 90-s.

In 2001, the Americans abandoned this program due to a sharp increase in cost. When the SM-6 rocket appeared, it was proposed to use it to intercept ballistic missiles at low altitudes - from 10 to 25 kilometers, not higher. The fact that today they intercepted a medium-range missile suggests that the rocket is really successful, successful,
The expert noted.

It is a continuation of the program launched in the mid-1960s to create Standard-type missiles - a further development of the main American missile fleet Standard-2 Block IV - only with the installation on it of an active homing head from an air-to-air missile AMRAAM - the most massive American aviation medium-range missiles
added on.

However, to call the test "milestone", probably would not be worth it.

Demonstrated what the previous system based on the SM-2 Block IV-A rocket was supposed to do at the beginning of the 2000s. The test results are about the analogue of the fact that the Russian C-300 Favorit system also knocks down ballistic missiles, with a certain restriction, of course. It’s just not clear at what speed the medium-range ballistic missile flew at the point where it was intercepted,
said Korovin.

That is, this is a ship-borne rocket, which will also shoot down ballistic missiles at relatively low altitudes. Each year, these missiles are produced about 80-90 units. The price of SM-6 is several million dollars. Any business suggests that you need as much mass production as possible. Naturally, they are trying to impose additional tasks on this rocket, in particular, anti-missile and anti-ship,
he concluded.