March 15 2012
87
With any flying technique, flight accidents happen sooner or later, sometimes even with human victims. In the evening of March 12, this sad list was supplemented by the latest Russian combat helicopter Ka-52 "Alligator". According to media reports, referring to sources in the Ministry of Defense, the commander of the helicopter, Lieutenant Colonel D. Rakushin, and navigator Lieutenant M. Fedorov performed a training flight in the vicinity of the 344-th center for combat use and retraining of flight personnel (Torzhok). About nine o'clock in the evening the connection with the helicopter was interrupted. In the area where the combat vehicle was supposed to be located at that time, a search group was sent, but as a result, almost all of the 344 personnel in the pulp and paper industry and FPS had to be recruited for searches, according to some media. Scouring the intended area of ​​the accident gave results only in the morning of the thirteenth number. Around 8: 40-8: 45 managed to detect the missing helicopter from the air. The remains of the car lay on the edge of the forest near the village of Big Kiselenka about ten kilometers from the airfield. 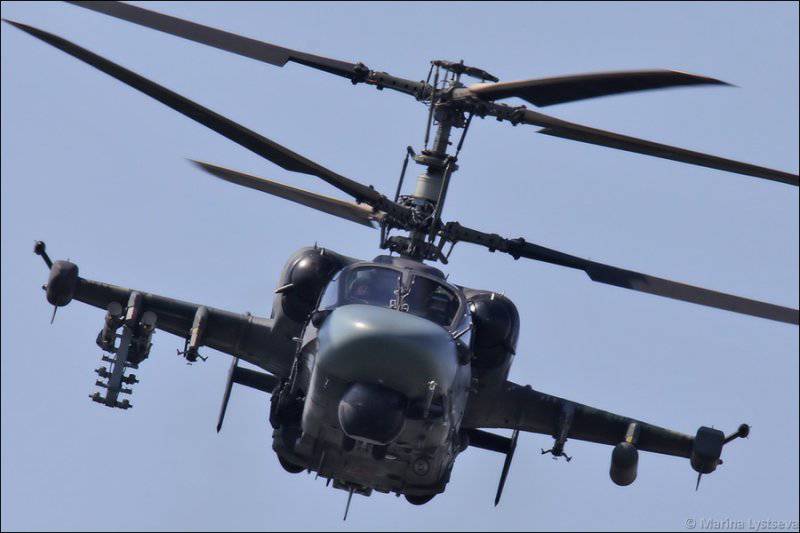 REFERENCE - Ka-52 Helicopter ("Alligator")
The Ka-52 Alligator multipurpose all-weather combat helicopter (Hokum B by NATO classification) was developed at the beginning of the 1990-s at the Kamov Design Bureau. Is a double modification of the Ka-50 "Black Shark". The first flight of the prototype took place on 25 June 1997 of the year. In 2008, the helicopter was put into service, but at the Progress plant in Primorye its serial production began.
Crew - two people (pilot and navigator). Fuselage length - 14,2 m, wing span - 7,34 m, height - 4,9 m, take-off weight - 10,8 tons, maximum horizontal speed - 310 km / h, static ceiling - 3,6 thousand m, practical range - 520 km. Ka-52 is equipped with two gas turbine engines with a capacity of 2,5 thousand liters. from. It carries a built-in 30-mm cannon; four or six points of the suspension can be equipped with guided and uncontrolled air-to-ground and air-to-air missiles, cannons in containers, and bombs. By the beginning of 2012, Progress had manufactured 20 serial Ka-52s, which entered the army’s combat training center aviation in Torzhok (Tver region) and at the air base in Chernihiv (Primorye). In August 2011, the Ministry of Defense signed a contract for 120 billion rubles. for supply by 2020 of 140 such machines. It is planned that the ship version of the Ka-52K will become the main striking force of helicopter carriers of the Mistral type, which should enter service in 2014-2015.
The search and rescue team that arrived at the scene first of all began to search for and assist the crew. The navigator, as reported in the press service of the Ministry of Defense, was killed when the helicopter fell. It was reported that the commander was found alive and even managed to take him to the hospital, where he died. However, by the evening of Tuesday it turned out that Lieutenant Colonel Rakushin had also died in the crash. The crew of the Ka-52 can no longer say anything about the causes of the accident, but there are on-board recorders (the so-called “black boxes”). Their condition is satisfactory and it will be possible to decrypt the records in a few days. A commission was created to investigate the disaster, and for the duration of the investigation, flights of Ka-52 helicopters were temporarily suspended.
It should be noted that the Ministry of Defense in the person of Colonel Vladimir Drik, as always happens in such situations, is laconic. You can understand the military - they need to conduct a full-fledged investigation and draw conclusions and statements from its results. However, as they say, the people want to know, and on this fertile soil, versions, rumors and speculation about the catastrophe have begun to spread. For example, for some people, the questions are caused by the fact that the search for the missing helicopter was carried out "manually" and not by emergency beacons. It is known that they are included after the ejection of the pilots, but they did not work on the fallen Ka-52. The fact is that until recently the crew did not pull the saving handles of the ejection seats. After the fall of the helicopter, three days had not yet passed, but there are already several assumptions on this score, from sane to outright heresy. Among aviation lovers, who were visibly disturbed by the catastrophe, various versions are being exaggerated: some say that the pilots tried to save the helicopter to the last, while other “truth seekers” say “pilots were drunk and therefore not ejected”. Perhaps, it is possible to draw appropriate conclusions not only about the plausibility of versions, but also about the "professional skills" of some home-grown experts.
However, even from the fact that the pilots crashed together with the helicopter, we can draw the appropriate conclusions. In the existing photographs of the Alligator's fall site, it is clear that the helicopter collapsed, but did not catch fire or explode. You can also notice that in the snow around the wreckage in addition to human tracks there are no signs of a long “ride” on the surface of the earth. Thus, it can be assumed that the helicopter fell vertically or almost vertically, with a small horizontal speed. At the same time, the vertical speed of the car was enough to destroy the structure and kill the crew. As you know, all helicopters have the ability to make an emergency landing without engines, using the effect of autorotation. With such a fit, the load on the structure is greater than during normal, but they are clearly insufficient to destroy the structure - its strength is calculated with a considerable margin. It turns out that only the failure of the engines could not cause an accident. One would assume that something happened to the blades, for example, overlap and destruction. But even this detailed version does not look right: firstly, during training flights the pilots should not go into supercritical modes, in which the blades could overlap, and secondly, among the wreckage of the helicopter, you can see bent even on the existing photo and video materials and broken blades. At overlap, they would literally chop off each other and only their root parts would remain on the helicopter. There is another version related to the material part. It concerns, if I may say so, the complex problems with the power plant. To ensure the possibility of autorotation in the composition of the helicopter transmission there is so-called overrunning clutch. It allows the propeller to rotate even when the engine is not running. If the engine and clutch fail at the same time, the helicopter is doomed. 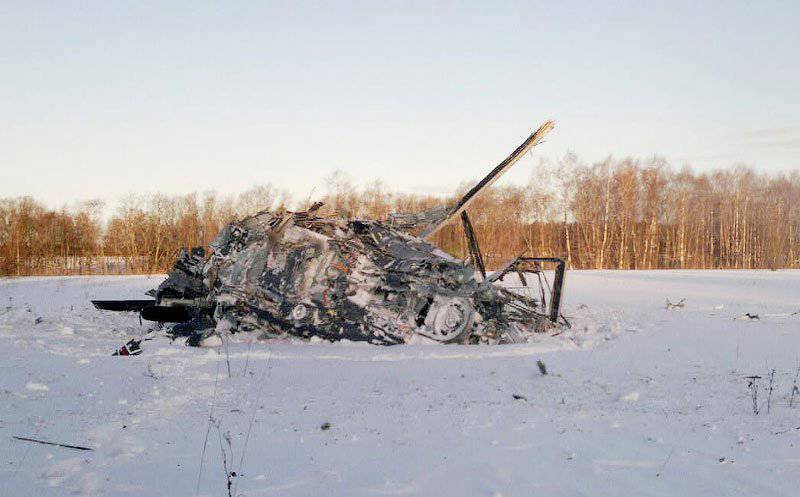 In addition to problems with technology, there may be other versions of the cause of the disaster. It should be noted that the human factor or meteorological conditions are indeed one of the most common causes of accidents. In particular, some mass media referring to some anonymous source said that the weather in the flight area on Monday evening was bad and the helicopter could get into the so-called snow charge. In this case, the pilots could lose orientation, which ultimately led to the disaster. However, this version has its drawbacks. Ka-52, unlike its predecessor Ka-50, has the ability to work in adverse weather conditions. Also, some aviation enthusiasts, carefully examining photos from the crash site, put forward such an assumption: the helicopter did not just fall, but also rolled over itself. This can be seen as a symptom of a strong gust of crosswind. Again, the version can be refuted by the technical features of the machine, because the helicopters of the pine scheme are less sensitive to lateral impulses than the aircraft with one rotor. Finally, the meteorological version is “finished off” with information about weather conditions in the flight area. In the evening of 12, the air temperature was about zero, and the north-west wind had an 3-4 speed of a meter per second. This is much less than is required to create serious problems for pilots.
As you can see, you can assume anything, but for a complete objective investigation, we simply do not have enough information. You can, of course, be like Detective Dupin from the books of Edgar Poe and try to conduct your own investigation based on publications in the media. However, there is a lot of hitch. For this reason, it would be most reasonable to consider our own and others' assumptions solely as versions, but no more. But the findings do no sooner than the military will publish the first results of their investigation, besides waiting for this is not long. As they say in the Ministry of Defense, the black boxes of the crashed helicopter almost did not suffer and their decoding will be completed by the end of this week. Then, hopefully, the responsible persons will share with the public a new portion of the details of the incident, and the mystery of the fall of Ka-52 near Torzk will clarify a little. At the moment, the commission is considering three main versions: design flaws, piloting or maintenance errors, and weather conditions.
In Torzhok held the funeral of the dead pilots. All expenses related to the burial were assumed by the Kamov company. The families of the pilots - M. Fedorov was married, while D. Rakushin left a wife and two children - will receive insurance in the amount of one million rubles. Colleagues of the fallen pilots began to raise funds to help their families.

Ctrl Enter
Noticed oshЫbku Highlight text and press. Ctrl + Enter
We are
Weekly summary (9-15 of January) on the military and social situation in the DPR from the military officer "Mag"ARMY-2016. The latest complex of biological protection
87 comments
Information
Dear reader, to leave comments on the publication, you must to register.