Under a hail of chemical shells. Part of 2

1 September 2017
12
To characterize the specifics of the application and to show the effects of chemical shells in the Russian front, we give several examples from the combat activities of the South-Western front in 1916 - 1917 campaigns.


22 August 1916 located in the Lviv direction on the position at the village. Lopushany 6-th battery of the 3-th artillery brigade from 15-ti hours began to lead a demonstrative disturbing fire on the enemy's trenches. It was a quiet, clear and windless day.

At about 16 hours, an enemy airplane began to adjust the enemy's artillery fire on the battery - 150-mm howitzers opened fire on it. For tactical reasons, Russian gunners could not interrupt the fire, although the shelling of the enemy soon became quite effective.

It was possible to detect rings of smoke rising from the crest of one of the heights - and immediately one of the battery platoons opened fire in this direction. Shells lay to the left, but the enemy's battery ceased firing. But as soon as the shooting at the enemy’s trenches continued, the Russian battery again came under fire from the 150-mm guns. The battery became harder under the devastating fire of the enemy.

Alarmed by this situation and, at the same time, having received the order to continue firing at the trenches, the battalion commander ordered that the chemical ammunition 200 of red shells be transferred to the platoon who was fighting the counter battery. He resumed fire at the enemy trenches and again came under fire from the same 150-mm battery, he ordered to cover all space behind the crest with chemical fire - on the 200-meter square, firing 20 chemical shells through each division of the sight. And when the counterbattery platoon had only 43 chemical projectiles left, the enemy didn’t respond. After about an hour of complete lull, when, having received the order again, the battery was forced to open fire on the trenches, then, despite this, and also the luster from the shots unmasking its actions, the enemy was silent. The 150-mm battery has "disappeared" from its position. 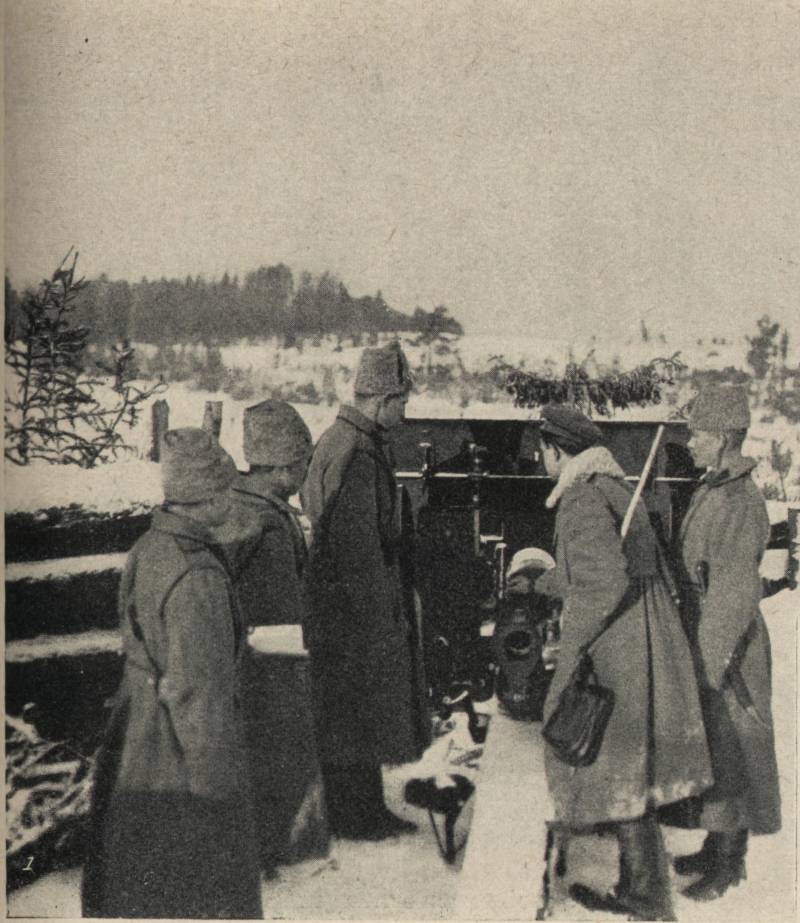 5. The gun on the position.

9 February 1917. The Germans launched an offensive at the Batkuv-Zvyrzhen villages. The 3-th battery of the 3-th artillery brigade, taking a position that allowed flank attack of the advancing enemy, fired at its advancing chains. Suddenly, around 10 hours, one of the enemy's batteries hit the battery, firing chemical shells. The fire took on the character of a hurricane. In the heat of battle, gun crews began to put on gas masks already in a slightly poisoned atmosphere.

The shelling lasted about half an hour. Minutes through 5 after it started the wind increased, which began to carry the gas cloud from the battery. As a result, on this day only 4 people were sent to the medical unit with signs of poisoning. The next day, 19 gunners felt bad - people complained of headaches, nausea, and severe pain in the stomach. On 3, the day after the shelling, that is, February 11, 12 people were evacuated with obvious signs of poisoning. And February 18 almost all (except 2-x) poisoned returned to operation. Thus, almost all of the battery personnel under the influence of poisonous substances suffered despite the use of gas masks, which significantly weakened the effect of the enemy's chemical strike. In the dugouts, despite the spraying of an aqueous solution of ash, residual gas remained for a long time, which also gradually caused poisoning. It was necessary to thoroughly air the premises and artillery items.

In 19 hours of 27 February 1917, the Germans conducted an intensive reconnaissance at the forest site of the 3 Infantry Division - in the area of ​​the Hukali forest - der. Repellers. After the 3-hour artillery preparation with chemical shells, the site was occupied by the enemy. But an hour later, the Germans were knocked out by reserves with the support of artillery fire.

But the enemy continued shelling the entire forest (battle line and reserves) until midnight. As a result, people who were poisoned before 600 were out of action in this combat area. And the next day, the pungent, irritating nose and throat, the smell of gases was still strongly felt. A large number of poisoned due to the fact that the infantry companies that fell under chemical fire were confused and lost their temper, trying to get out of the poisoned area as soon as possible.

6 July 1917 in the position of Zlata Gór - Manilówka - Hukaliyovtse, the Germans, carrying out vigorous preparations for the offensive, sought to paralyze the activities of the Russian artillery in the central military section of the village. Maniluvki. During the period from 3 to 14, this area was under fire from chemical shells, sometimes alternating with high-explosive shells. Since the artillery preparation on the flanks began earlier, the command of the Russian battery managed to take the necessary measures, and all the calculations put on gas masks.

The shelling of the firing position of the battery and the front end continued for 11 hours. Shells burst without a crash, with a hissing sound. Due to the deep dell located behind the battery, the gas cloud crawled down, which was a very favorable circumstance. In total, seven gunners were registered with signs of poisoning. Such low losses were attributed to the use of gas masks, the fact that people were outdoors, and the weather-specific terrain (ascending streams of hot air gradually dispersed the gas cloud).

The situation was different in the line, where the gun front was located. If the riders in gas masks calmly withstood the shelling, the horses, in spite of the sleeves with wet hay they were wearing, were very worried - and as a result, they had to move their vaults no less than a kilometer ago.

It was especially hard for telephonists who rebuilt damaged lines and were forced to run under enemy fire. One unconscious telephonist was found with a gas mask torn off next to him.

In order to facilitate the telephone operators responsible work, a special blindage was equipped between the observation point and the battery. It consisted of tents moistened with a solution of ash strung on wooden frames; the frames at the edges were wrapped with wetted felt - they did not allow gases to pass when closing the dugout. This dugout was very useful to telephonists - he gave them the necessary short respite, and people were able to at least temporarily get rid of the gas mask and breathe freely. However, almost all (6 people) telephonists of the battery with strong signs of poisoning were put out of action.

The vegetation on the position, despite the summer time, looked autumn: the leaves of the trees were curled and turned yellow, the grass was withering and had a dark yellow color. All metal (copper) parts weapons and the gear went green. Eyewitnesses noted the insignificant high-explosive effect of chemical shells. So, 2 projectile struck the roof of the battalion's dugout, but there was no destruction. One of the shells exploded one and a half steps ahead of the telephone operator and did not cause him any harm.

Shelling was carried out by two types of projectiles: the first contained liquid bromide compounds (xylobromide and xylylen bromide) (they gave a pleasant smell and irritated mucous membranes), and the second were filled with palit - metal formic acid ester (this was indicated by a strong effect of gases on metal). A German source recorded that the Germans used to fire chemical shells on a system of so-called "gas rectangles" to neutralize Russian batteries in this battle. This method of firing consisted in the defeat of a predetermined area of ​​the terrain, in the center of which was to be the battery of fire. The shelling area usually had the appearance of a rectangle 200 - 300 meters along the front and 400 - 500 meters in depth, and the number of projectiles needed for this task was calculated based on the square of the rectangle. A similar method of firing chemical shells was used by the Germans on the Russian front during the breakthroughs - at Chervyshchensky springboard on April 3 and near Riga on September 1 of 1917. 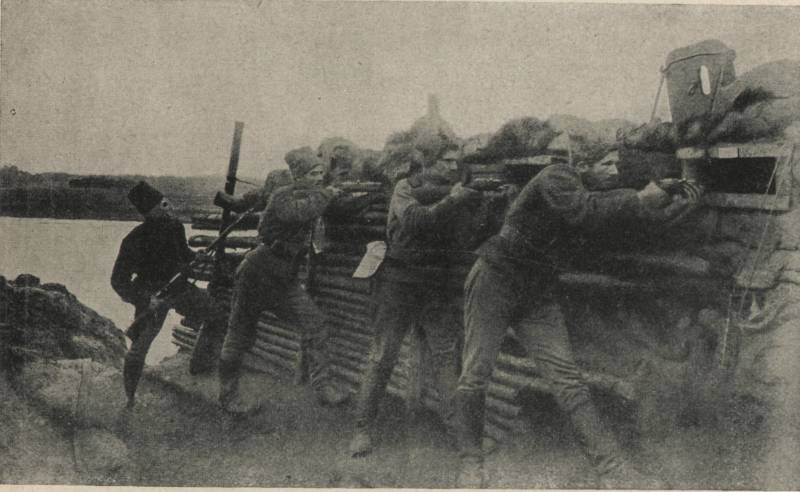 6. Defenders of the bridgehead.