Anti-ship "trap" for the US Navy in the APR. The strategic air "killer AUG" H-6N 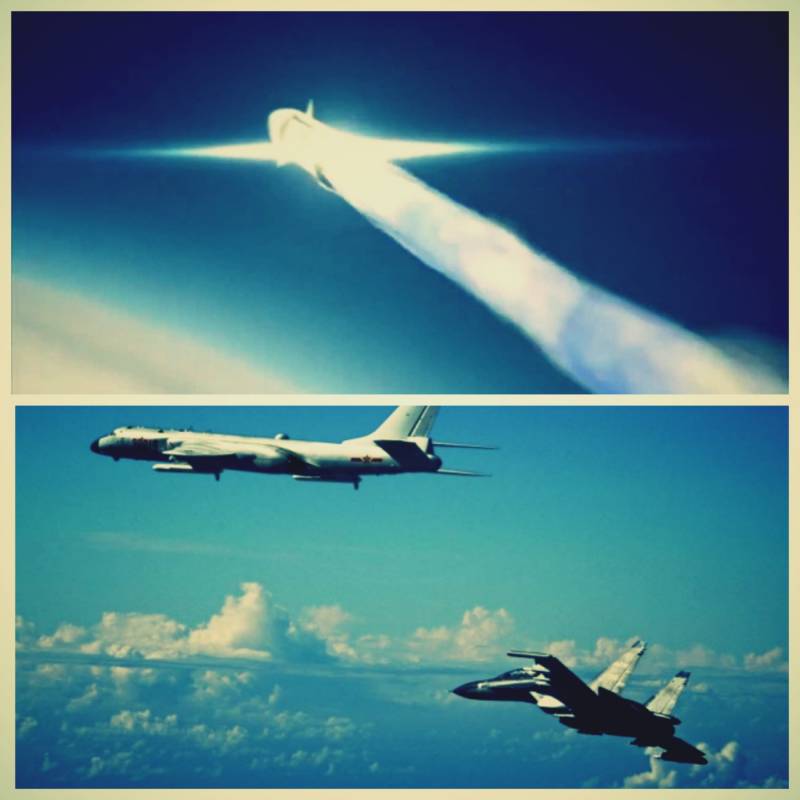 Extremely important information continues to come today from the Indo-Asia-Pacific region, where an increasingly noticeable geostrategic “gap” is forming between Washington and Beijing’s global ambitions “mixed with” the North Korean concept of nuclear deterrence aimed at protecting national defense programs. While Kim Jong-un, the military leadership of the DPRK, as well as the population of the socialist republic for decades have not been tied to the economic structure of the Asia-Pacific region, one way or another suffering from dependence on the American market and the dollar, in China there is a slightly different situation requiring maintaining a wait-and-see attitude with slow reformatting of the economy and increasing technological perfection of strategic components fleet and the air force. To resort to the implementation of serious operational-strategic countermeasures, the command of the PLA prompted the appearance of several factors at once, indicating Washington’s desire to strip China of its former borders in the South China and East China Seas, as well as very successful attempts to obtain radar control over the airspace of the provinces Shandong, Jiangsu, Anhui and Henan. In the latter case, we are talking about deploying a THAAD missile defense system battery in South Korea.

The threat here is not at all in the anti-missile system (after all, the PLA’s 2 artillery corps has a ton of other directions for a massive launch of ICBMs and MRBMs), but in the AN / TPY-2 GBR multi-function radar for detecting and targeting, which can detect aerospace objects with EPR within 5 - 7 m2 at a distance of about 1200 km. Thus, under the guise of monitoring the launches of North Korean ballistic missiles, the American THAAD calculation is able to track everything that happens in the airspace over the above provinces. Moreover, an important role is played by the intensification of regular reconnaissance flights of anti-submarine aircraft P-8A "Poseidon" near the disputed Spratly archipelago, as well as the co-operation of the US Navy with the Indian Navy in order to complicate the operations of the Chinese CCG and the IAPL in the Indian Ocean.

In previous works, we returned several times to the development programs of promising supersonic low-profile H-20 and YH-X bombers with 2-xfold speed advantage over Russian PAK DA and American LRS-B, also considered the concepts of hypersonic LA-carriers of "nuclear equipment", capable of “breaking through” the most complex missile defense systems in the sea and land theaters of military operations. They should allow Beijing to establish parity with Washington within the "Third Chain" of islands in the Pacific zone. But the background here is that bringing these concepts to a state of operational readiness will require at least 8 - 10 years of hard work by specialists from Xian, a Chinese company, and numerous research institutes specializing in the design and manufacture of aerospace equipment. For example, the far obscure bomber H-20 bomber should go into service between the 2025 and 2027 years. Based on the current military-political situation, it can be assumed that until the middle of the 20-s, several serious conflicts may occur in the Pacific theater of war, in which the Chinese Air Force will need a sufficiently advanced strike weapon capable of leveling the high effectiveness of ultra-long-range anti-ship missiles AGM -158C LRASM and anti-ship versions of "Tomahawk" under the name "Maritime Strike Tomahawk".

The development of a new supersonic anti-ship missile underwater launch, which could be launched from mine universal TLUs or 533-mm torpedo tubes of multipurpose nuclear submarines of pr. 093B "Shan", will also take a lot of time, while the existing YJ-18 have a range of 300 - 500 km , yielding to subtle LRASM by 1,5 - 2 times. A way out was found in the "crossing" of existing weapons systems. So, according to one of news posts posted on the information resource defense-blog, com over the past 2 weeks, flight tests of the long-range missile carrier H-6N from the company "Xian" are being carried out in the Celestial Empire. This machine is one of the modifications of the domestic long-range bomber Tu-16, but it has a fundamentally new "digitized" avionics and 32% more high-torque D-30KP-2 bypass turbojet engines. The avionics include a modern inertial navigation system, a powerful electronic warfare station with electronic reconnaissance sensors, as well as a more high-energy airborne radar with an increased antenna array diameter to search for enemy surface and coastal targets. The compactness of the digital element base made it possible to increase the volume of the fuel system, due to which the combat range increased from 2 to 3 thousand km. The fuselage design and "stuffing" of the H-6N is almost identical to the long-range missile carrier H-6K. The latter forms the nuclear triad of the Celestial Empire, being the carrier of the CJ-10A strategic air-launched cruise missiles. 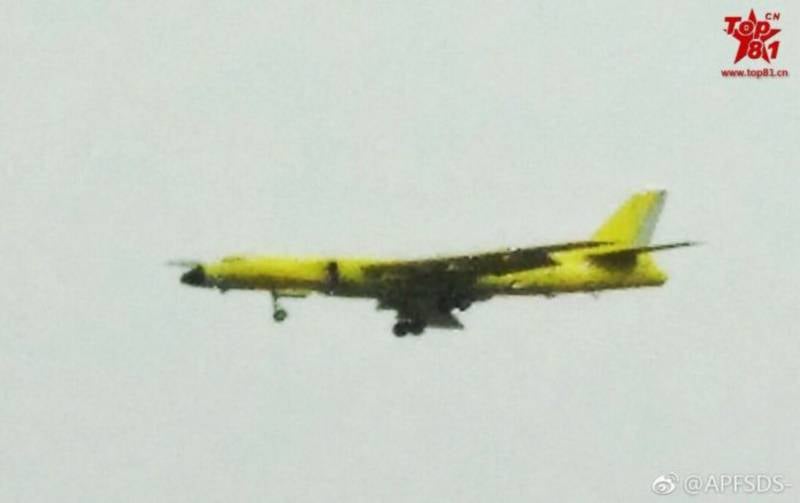 Seen in China, the prototype of the promising missile carrier H-6N

The H-6N missile carrier will be the carrier of the medium-range anti-ship ballistic missile DF-21D. The news is very unexpected and significant. About a month ago, we examined the July anti-ballistic missile tests of the American THAAD complex on Kodiak Island (Alaska) under the name FTT-18, during which a medium-range ballistic missile with training equipment was launched from the cargo compartment of the C-17 Globmaster III strategic military transport aircraft were also described the program of an aeroballistic missile with Skybolt launched from external suspension nodes of the B-52 strategic bombers, and the Minuteman III intercontinental missile launched from the cargo compartment from rategicheskogo MTC C-5A «Galaxy». These projects were not destined to reach large-scale production, but in the course of single tests valuable technical data were obtained, which made it possible to determine all the advantages of air-launched ballistic missiles of various classes. In particular, it was determined that when a BR is launched from an altitude of 12 km, the following is observed: an increase in the characteristic speed of approximately 1,13 times (indicates a longer period of operation of the first and second stages in the upper layers of the stratosphere), a decrease in backpressure losses (determines the efficiency coefficient of rocket fuel in more rarefied layers of the atmosphere), a decrease in aerodynamic drag losses, which in turn leads to an increase in the characteristic speed.

There is only one thing to be summarized here: high-altitude launch significantly increases the flight range of a ballistic missile, this applies to the Chinese "Dongfeng." Consequently, the anti-ship ballistic missile DF-6D launched from the H-21N missile carrier will have a range of not more than 1800 - 2000 km, but 2500 - 3200 with a launch height of 8 - 12 km. With a carrier radius of 3000 km, this will make it possible to strike at American AOG at a distance of up to 6200 km (in the vicinity of Midway Atoll). For these purposes, long-range anti-ship modifications of the CJ-10A ASRM with a range of 2500 km can also be used, but their flight speed is more than 10 times lower than that of the DF-21D. The operational-strategic anti-ship capabilities of the new H-6N with the DF-21D missile are simply unique. The placement of only one 14 - 14,7 ton PKBR on one missile carrier is more than compensated by a maximum mass of combat equipment of 2000 kg, which provides for the installation of three to four individual combat guidance units. At the final section, they can be controlled with the help of aerodynamic rudders, at the time of breeding in the stratospheric section - by means of gas-dynamic rudders. The launch of the DF-21D missile to the battlefield is carried out according to target designation data from satellite reconnaissance systems, or from air-based radar systems that are part of the avionics of marine tactical fighters aviation, long-range anti-submarine aircraft, KLJ-2000 AWACS aircraft and strategic Soar Dragon unmanned aerial vehicles.

As for a target combat target targeting system, or IN split combat units, most likely, passive radar homing heads are used to detect and capture radiation from shipborne radar radar stations and the MRLS for control of shipboard air defense systems. It is also possible to point to the sources of radiation of the tactical radio channel of the Link-16 network. Circular probable deviation using passive X-ray targeting can range from 50 to 30 m. In the case of use of cluster equipment with hundreds / thousands of submunitions rushing to enemy AUG at a speed of about 8500 - 9000 km / h, it can be argued that the main avionics of surface ships will be disabled (the AN / SPY-1D radar antenna canvases will receive critical damage), just like the main combat component of Aegis ships - the universal TLU Mk 41.

Moreover, nuclear warheads with a capacity of several kilotons or superhigh-frequency (UHF) hypersonic electromagnetic warfare BBs that can literally burn down the radio electronic element base of any modern unit can be used as warheads. The accuracy provided by Chinese sources in 30 m is a very excellent indicator for a rocket of this class. For example, the first Soviet anti-ship ballistic missile of an underwater base, the P-27, in the initial modification had a QUO in 1,9 km, in the P-27U version - on the order of 1,3 km, because of which high efficiency was achieved solely thanks to the installation of three nuclear unmanaged “dispersing type” BB power of 200 kt, or a single controlled with a power of 1 Mt. High-explosive or cluster equipment with 1,9 - 1,3-kilometer QUO would not lead to the proper result. 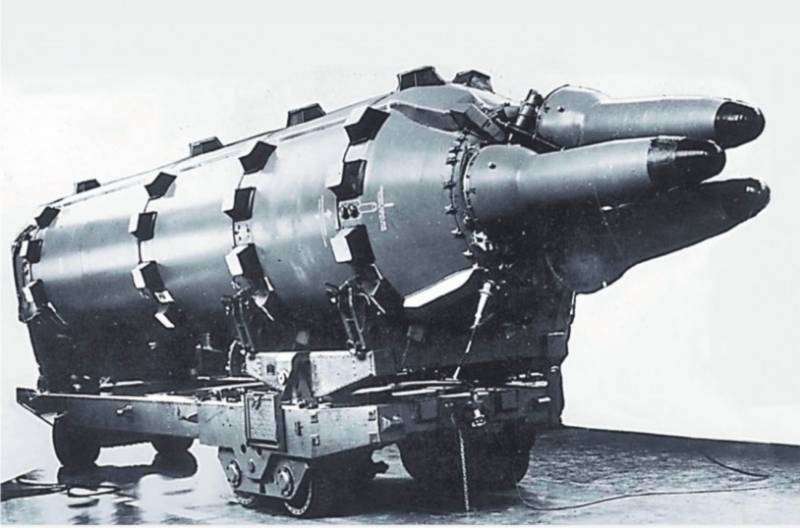 The Chinese DF-21D is the brainchild of technology XXI and is controlled by the INS with a digital computer that provides the minimum error. Moreover, monoblock and separable warheads can carry containers with complexes of means for overcoming missile defense on the basis of light and heavy false targets, dipole reflectors, tanks with infrared aerosols, and also compact electronic warfare modules. A squadron from 10 H-6N can strike at the United States Navy AUG with ten “Dongfans” with 10, 30 or 40 warheads and even more false targets. Americans have almost no chance of maintaining combat stability in the Pacific and Indian Oceans. Last but not least, the H-6N missile carriers will be able to take to the center of the suspension and such a modification of the Dongfans, like the DF-21C, which will ensure the ability to carry out attacks on the island military bases of the Navy and the US Air Force in the Indo-Asian-Pacific region, where the list includes the “favorite” objects of Kim Jong-un - Andersen airbase and Apra naval base located on the island of Guam.

The only drawback of the strategic anti-ship "bundle" "H-6N - DF-21D" is morally and technically outdated media. Despite the excellence of the electronic “stuffing” of the upgraded Tu-16, the design of the airframe and the power plant has not changed. The same rounded edges of the fuselage, a direct duct with an open architecture of the engine compressor, etc. All this makes the EPR machine just perfect for long-range detection of the F-22A and F-35A fighters relocated to Japan or Taiwan. For this reason, during the long-distance anti-ship operation, the H-6N route should pass as far as possible from the 800-kilometer boundaries of their patrols, also the missile-carriers cannot do without long escorting with the J-15S, Su-35C and J-20A fighters.