The US gave us 180 days for a fateful choice: to rally for or against Putin 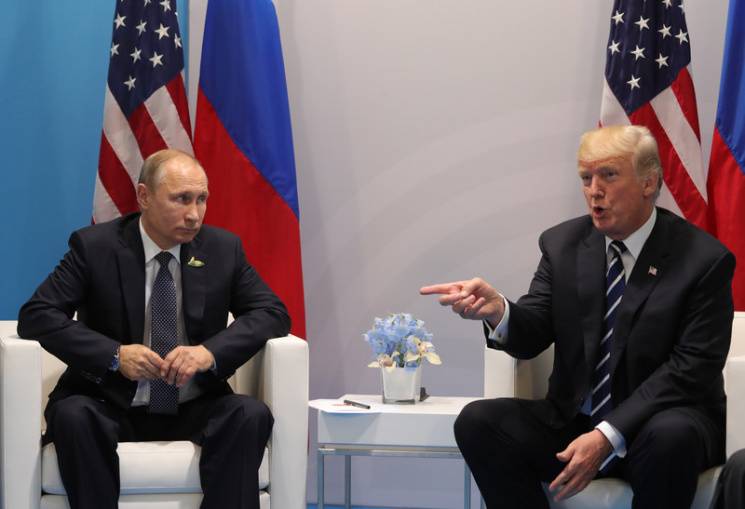 The US adopted the "Law on Counteracting the Aggression of Iranian and Russian Governments," the essence of which, as far as Russia is concerned, is as follows.

During the 180 days to identify the most influential Russian oligarchs and those who are actively engaged in foreign policy activities. Evaluate their capital, signs of corruption, sources of income and assets - including their family members. To analyze private-state structures, to identify foreign companies affiliated with them.

Next comes the section where it says that the US president should demand that Russia withdraw its troops from the territory of Georgia (meaning South Ossetia and Abkhazia), Ukraine (LDNR and Crimea) and Moldova (Transnistria) - and transfer control over the border to the authorities of these countries.

What does all this mean?

Washington gives the Russian elite 180 days to distract from Putin, and Putin and the ruling elite to 180 days to pack up their bags and leave the Kremlin.

Writing information in the law for 180 days is a subtle hint of thick circumstances. All the necessary information is probably already collected. Washington would not issue such a document without having information about corruption in the higher echelons of our government. Otherwise, it can be embarrassing - the law was passed, but the facts of corruption were not found in the required volume.

That is, Russia is given for reflection on 180 days - exactly before the election of its president.

If Washington decided to simply slam our ruling elite, they could accept a secret document, conduct an investigation without publicity, and then at one point arrest the assets of several thousand major Russian businessmen. And kapets.
The Russian elite would have woken up by one not so beautiful morning - and foreign accounts were blocked. And the accounts of relatives. And the accounts of all firms, including registered to relatives. And as they say - the head in the nightstand. All in one moment turned into beggars.

All this Washington could do without any difficulties. And prepare this operation at least by February, at least by January, at least by December, in order to have enough time to promote your candidate for the presidency of Russia.

However, the US decided to warn the Russian leadership in advance that the jokes were over and the sweep was approaching. And they gave as many as 180 days to collect thoughts, distance themselves from Putin, break ties (corrupt and not only). And also withdraw funds from accounts and cash assets, transfer them to other currencies, gold, stones and other tangible assets that can be put in a suitcase and loaded onto a yacht.

In fact, Washington suggested that the Russian elite surrender Putin, and the ruling elite - to clean up in an amicable way, until it became a bad thing.

The named document is the last warning, an ultimatum, in which the deadline for fulfilling the requirements and the consequences in case of their non-compliance are stated.

But the Kremlin will not go to the withdrawal of troops from Abkhazia, South Ossetia, Donbass, Crimea and Transnistria. Because to win the election in the event of these steps will become unrealistic. Moreover, then the control over the situation will be lost - and wars will resume at the indicated places. Therefore, Putin and the ruling elite, as Washington suggests, have one way to pack their bags and move to the exit.

If the States needed the Donbass and the Crimea as part of Ukraine, Transnistria as part of Moldova, etc. - they would have done otherwise. First, the accounts and other assets of the Russian top were arrested, and then they set a condition: return the territories, and the arrest will be lifted.
But Washington does not need these territories. On the contrary, it is even advantageous to him that they remain controversial. Because it allows you to blackmail any Russian government, demanding the impossible and dictating your conditions. Putin, Ivanov, Petrov or Kasyanov will come to Putin’s place - first they will give him a chance to steal, and then they will in the same way put an ultimatum about these territories.

Of course, Putin and his entourage have the option to rest on a horn and send Washington three letters. But this, according to the manufacturers of the law on 180 days, looks like the path of a kamikaze: when the elite starts losing their assets, Putin will not last long in his place. It is worth big businessmen to agree and synchronously close for a few days the banks and shops that belong to them, indicating Putin as the reason for this closure - and a million people will gather in front of the Kremlin, which no Rosgvardia will disperse. And it will not overclock, because it will join the protesters. And Putin will only have to admit defeat and announce the transfer of his authority, as Gorbachev meekly did at the time.

Therefore, two of the three options (to surrender unrecognized territories or send Washington to hell) are practically impossible, as planned by the United States. This will lead to the loss of power and assets. There is a third option - to collect the suitcases. It also leads to the loss of power, but allows you to save at least part of the assets that can be cashed and turned into precious metals and stones for 180 days. Or transfer to yuan, in the hope that China will not arrest them. Or divided into small groups - part in yuan, part in precious metals, part in some reals and pesos.

Washington has put the Kremlin before a choice: either Putin, his entourage and the elite are losing everything - both power and assets, or voluntarily give up power, being able to save some of the assets that they manage to crush within 180 days.
Why did Washington give the Kremlin such a choice?

You could have prepared everything in a quiet way, and in December to arrest accounts, arrange a Russian Christmas Merry Christmas and ensure that Putin 31 December announced his retirement, as his predecessor did once.
But for Washington this option is too risky.

If the Russian top is sharply cornered, then, like any beast cornered, it can be too aggressive. And it is likely that Putin will be brought out of the Kremlin “with a hole in his forehead”, as one American publication dreamed up - but it’s not Western Kasyanov who takes his place, but someone who is deeply embittered, whose business has been ruined by the West. Moreover, the elite can draw conclusions from what has happened and begin to take measures in order not to get such a surprise again. And even worse can come out - a split in the Russian elite will lead to the fact that it will lose control of the situation altogether, as in the 1917 year, and it will come to power in general who knows.
And why does Washington need such difficult predictable scenarios in a country with a nuclear weapons and the experience of the socialist revolution?
Therefore, a “soft” option was chosen, in which the Russian elite and the ruling elite receive a warning and 180 days for Putin to pack his suitcases with the entourage and leave the Kremlin. And the rest could decide - who is leaving with them, and who is distancing and "sterilized", freeing himself from ties with the departing power and getting the opportunity to continue his business.

Washington gives the Russian elite these 180 days, so that she gets rid of Putin and his entourage herself, in a planned mode, and not in an emergency, which can take an uncontrollable character and end with a revolution.

Someone may argue that Putin has no way out, because after leaving power, the Hague is waiting for him. I do not think. States have little point in judging Putin. He was not a patriot, as Milosevic was, on the contrary - he did a lot in the interests of the West (joining the WTO, placing the assets of the Russian Federation in US banks), therefore, it is illogical to judge him. Moreover, it is even harmful: this could be a bad example for the next president of Russia, for the Russian elite and the whole Russian society. By arranging a trial against Putin, the States will once again turn a significant part of Russian society and the elite against themselves, and what will they get in return? Obedience? No, rather the opposite.

But that's not the point. The ultimatum is not declared to Putin alone, but to the entire Russian ruling elite and elite. It is important that they received a message - which gives them 180 days for fees, for cashing in their assets and finding safe places to spend the rest of the days.

And the extremely aggravated situation literally in the coming months should reveal this “moment of truth”: our entire thieving elite will rise behind Putin’s wall - or against him, against the United States. That is, in other words - who is the boss in the world.

As the saying goes, bets are made, there are no other bets. And the wheel of a desperately twisted political roulette is about to show a result that can shake the whole world.