What scared the governor of the Zaporozhye region?

August 1 2017
8
Last Thursday, at an extraordinary session of the regional Council of the Zaporizhzhya region of Ukraine, the governor of Zaporozhye Konstantin Bryl said that a coup and seizure of power was being prepared in the region. Reporting this news the Lenta portal cited Bryl’s words about “large-scale active actions aimed at supporting a violent change or overthrow of the constitutional order, seizing state power, changing the borders of the territory or border of Ukraine, as well as financing these actions.” Bryl promised the deputies of the regional council to transfer the facts he had to the president of the country, the Prosecutor General and the Security Service. 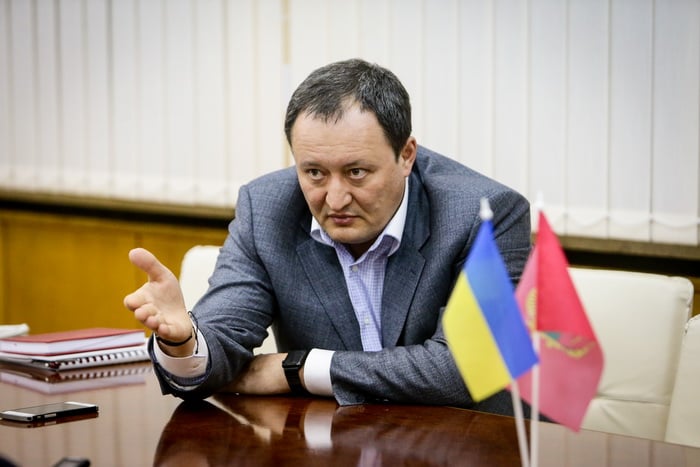 Something about protest moods in Ukraine

Bryl did not present the real reasons for his fright to the assembled public and did not specify who exactly wants to seize power. He only noted that protest moods are growing among the inhabitants of the region. The governor of Zaporozhye has not revealed any new secret here. After all, this is the permanent state of the population of Ukraine under the current government.

Initially, protest sentiments were motivated by the mobilization of men for war, then by disappointment in the “Maidan revolution”, which benefited a group of thieving fighters and their henchmen. The sharp deterioration in the socio-economic situation caused a new round of growth in protest sentiments. Now it has been supplemented by people’s fatigue from the degradation of the country, from the feeling of hopelessness and lack of prospects.

One can argue: whether or not there is a rise in these sentiments. Indeed, even last fall, sociological measurements showed that the cabinet activity was not supported by 87 percent of survey participants, as many respondents were against the Verkhovna Rada, and two-thirds of respondents did not approve the policies of President Poroshenko. Further protests seem to have nowhere to grow.

But what really changed in the mood of the Ukrainians was their attitude towards Russia. It got better. Much has already been written about this study by the Kiev International Institute of Sociology. It is hardly worth repeating. However, it makes sense to remind data on Zaporizhia. Here Russia (“the country of the aggressor”) is favored by 54% of respondents - one of the highest rates in Ukraine.

The data of this spring survey was published in early July. By the end of the month, Governor Bryl had matured so much that he sensed in the area entrusted to him signs of constitutional upheaval and large-scale actions of protest forces, which, apart from Bryl, frightened by sociologists, no one really saw.

But experts see something else, for example, emergency shutdowns of power units at the Zaporizhia nuclear power plant, quietly degrading along with the whole country, the seizure of property by nationalists in competitive enterprises. What worries people most is the unceasing rise in prices for essential goods and products.

However, this is not only the trouble Zaporozhye. In mid-July it became known that in Ukraine there was a shortage of carrots. Local officials explain this with different reasons: reduction of acreage, crop failure. Anyway, according to TASS, carrots were brought to the Ukrainian regions from the European Union.

Naturally, its price immediately jumped at 20 percent. Not spared this fate and other ingredients of the so-called borsch set. Pork, beef, potatoes, cabbage, onions, beets have risen in price. Experts sadly joke that the cost of a popular dish in Ukraine came close to the price of overseas delicacies. However, officials are looking for protest moods of people not in the high cost of life, but in some destructive forces that undermine the foundations of the current government.

Experts also link the alarmism of Governor Bryl with the speech of the President of Russia to the workers of the Lebedinsky Mining and Processing Plant. Two events led to Vladimir Putin’s neighboring Belgorod Region. First, the anniversary of the plant, which is now celebrating its 50 anniversary. Secondly, the launch of a new workshop for the production of hot briquetted iron.

This trip of the president was remembered for his meeting with the workers of the Lebedinsky GOK. The issues there were serious. They talked not so much about the affairs of the plant, as about the problems of neighboring Ukraine, with which not only Belgorodchina, but all of Russia was associated with large-scale economic relations.

Now they are mostly torn. As an illustration of this gap, Putin cited the Zaporizhzhya enterprise Motor Sich, which, at the request of the Kiev authorities, refused Russian orders for aviation engines. Now Zaporizhzhya engine builders, in addition to aircraft engines, are developing the production of meat grinders and other consumer goods in order to compensate for the volume of orders dropped out.

Proceeding from this particular case, Putin spoke of the desire to restore the broken economic ties. “We would like to restore cooperation as a whole, everything is not lost there. This would undoubtedly benefit both the Ukrainian and Russian economies, the president said in Belgorod Gubkin. “After all, there are almost no industries that would work effectively except for agriculture ... Therefore, the sooner we restore normal relations, production and economic ties, the better it will be for both Russia and Ukraine.”

Ukrainian officials drew attention not to Vladimir Putin’s peace-loving and benevolent tone, but to his main conclusion that cooperation will be restored only when Ukrainians restore order in their own home. “How long will this go on? “I don’t know,” Putin estimated the situation in Ukraine. “It depends on the people who live there, how long they will tolerate it.”

Soon after, Governor Bryl announced in the Regional Council his horror stories about the upcoming seizure of state power. Although the Zaporozhye enterprise, the president of Russia touched on in passing. Putin talked more about Kharkov, which is about 90 kilometers from Belgorod. Compare the current state of these cities, their industrial potential.

The authorities of Ukraine perceive Kharkiv (the second largest city in the country) as an unreliable region. Here, governors have already been changed twice, loyal officials have been appointed to Kiev, they have isolated the active opposition. Not so long ago even the former regional governor Mikhail Dobkin was arrested.

However, it is not yet possible to reverse the public mood here. Because even with the presence in the region of forces supporting the Kiev regime, Kharkiv was, and remains, according to experts, a zone of natural influence of Russia. This was confirmed by the latest polls of Kiev sociologists.

Now about the long-suffering in the Ukrainian East spoke and the president of Russia. His words were perceived in Ukraine as a kind of signal, a clue - where the real regime comes from is a real threat. True, Ukrainian officials react to Putin’s words differently. While alone (as Governor Bryl) hysteria. Others, like the Minister of Internal Affairs of Ukraine Arsen Avakov, make far-reaching plans.

Avakov, with the support of nationalists, is trying to take control of Kharkov in order to turn it "into a battlefield between various Ukrainian radical political forces." About this on his Facebook page wrote Ukrainian journalist Yuri Kot. Minister Avakov has a bad reputation in the informed environment for a long time.

The largest nationalist armed groups in the system of the Ministry of Internal Affairs and the largest criminal groups in Ukraine are associated with Avakov’s name. For example, the so-called "amber mafia". If the journalist’s forecast is confirmed, it is not difficult to imagine what fate the minister is preparing for one of the most economically efficient regions of Ukraine in the past.

In any case, it is obvious that the new Kiev authorities began to feel uncomfortable in the environment that it created during the time after Maidan. Especially now, when Vladimir Putin showed the Ukrainians an alternative to their present life. The new activity of Ukrainian officials suggests that the path to this alternative will not be so close ...