Report of the DPRK Embassy in the Russian Federation

July 30 2017
182
Today, July 30, the Military Outlook has received a message from the DPRK Embassy in the Russian Federation, which refers to the successful testing of the Hwason-14 intercontinental ballistic missile. "Military Review" gives the entire text of the letter:

Dear comrades!
We are sending you a message about our next successful launch of the Hwaseong-14 intercontinental ballistic missile.
This is a brilliant victory for the Juche idea.
Sincerely, The DPRK Embassy in the Russian Federation

Under the personal guidance of the Chairman of the Workers' Party of Korea, Chairman of the State Council of the Democratic People’s Republic of Korea (DPRK State Council), the Supreme Commander of the KPA, the highest leader of our party, the state and the army, Comrade Kim Jong-un, on the night of July 28 106, Juche (2017) was successfully held the second test launch of an intercontinental ballistic missile "Hwaseon-14".

Dear senior leader, who with uncommon military wisdom, courageous will and quick-witted resourcefulness always creates all-conquering miracles and declares victory matt, refuting the predictions of the people of the world, presented a combat task to the field of studying missiles.

In the shortest possible time, conduct a test launch, staged the maximum range of the Hvason-14 intercontinental ballistic missile and once again confirm the reliability of the complete missile system.

Scientists and technicians in the field of state defense - the loyal fighters of our party, who with absolute confidence in the party share with the leader and ideas, breath, steps and take any fortress in one fell swoop, had a deadly battle with full confidence that they would vividly show the strong power of TPK’s strategic nuclear forces the whole world. And they completed the preparation of the second test launch of an intercontinental ballistic missile ahead of schedule. 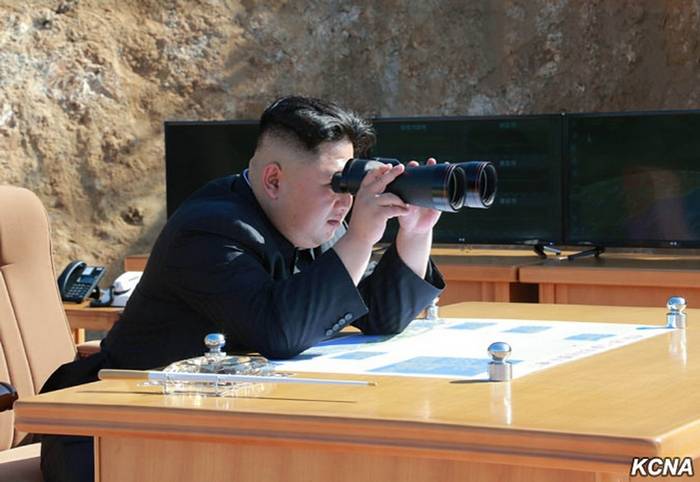 Dear senior manager during the preparation of the test launch of the second intercontinental ballistic missile "Hwason-14" every day in a row received reports on this. And he gave prudent instructions, and on the night of the launch day he personally went out to the rocket test launch site and supervised on the spot.

This test launch was carried out to finalize the general technical specifications of the weapons system, including the maximum reach of the Hvason-14 intercontinental ballistic missile capable of carrying a large heavy nuclear warhead.

As soon as the distinguished senior leader ordered the launch, the Hwaseong-14 intercontinental ballistic missile at once rose into far space.

The intercontinental ballistic missile "Hwaseong-14", launched in the north-western region of our country, rose to 3,724.9㎞ (maximum peak), flew 998 in 47 min. 12 seconds and just got into the specified area in the open sea.

The test launch was carried out at the highest possible angle, simulating the maximum reach of the fire, and did not have any negative impact on the safety of the surrounding countries. 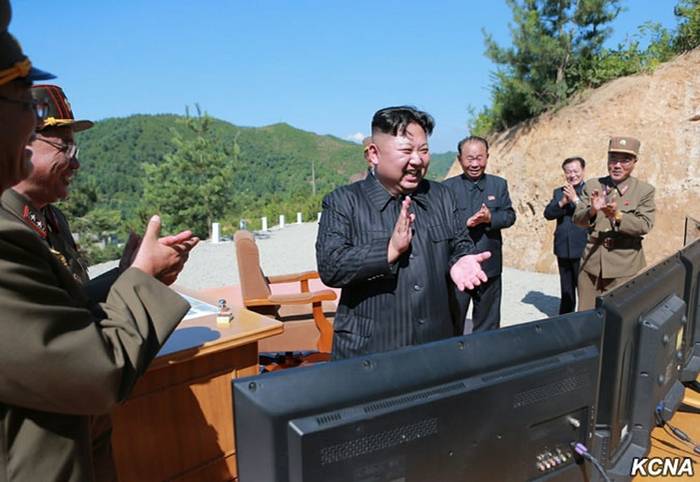 The distinguished chief executive proudly said that the reliability of the intercontinental ballistic missile system was once again confirmed in this test launch, and the ability of a sudden launch of an intercontinental ballistic missile at any place and at any time was demonstrated. And it has been clearly proven that the entire mainland part of the USA has now entered under our scope.

Dear senior manager said that today we deliberately carried out a test launch of an intercontinental ballistic missile, staged a maximum firing range to strictly warn the United States, which, having lost its mind a few days ago, wears empty nonsense. Looking at the current level, the compilers of the US policy probably correctly understood that if even their fingers touched our state, then the aggressive state of the so-called US would not be in vain.

The distinguished senior leader said that the arrogant nonsense about the war and the threat of extreme US sanctions against our state, on the contrary, will awaken, inspire us and reinforce our argument of possession of nuclear weapons. weapons. And he stressed that for our people, who experienced the terrible calamity of war by American beasts on this earth, the mighty power of deterring the war for the defense of the state is a necessary strategic choice, irreversible and incomparable expensive strategic property.

The distinguished senior leader noted that if, despite our repeated warning, the United States once again pushed a bad face into our land and deployed an awkward play with nuclear weapons, we would correct their bad inclinations with our strategic nuclear forces, which we thoroughly showed.

The distinguished senior leader warmly congratulated scientists, technicians and workers in the field of the study of missiles, who once again demonstrated to the whole world the independent dignity and majestic type of the Juchea nuclear power, the world's leading country for the development of missiles, successfully conducting the second test launch of the Hwason-14 intercontinental ballistic missile ". And he was photographed for memory along with everyone. That touching look will remain long in stories.

Our Republic, under the banner of a new line of parallel waging the great Labor Party of Korea, will certainly achieve a final Victory in the anti-imperialist and anti-American struggle by developing and improving more powerful strategic and Juche weapons, demonstrating to the whole world the invincible power and potential forces of Juche Korea’s development.

According to the Russian defense ministry, the rocket rose to a height of 681 kilometer and flew 732 kilometers, falling in the central part of the Sea of ​​Japan. As noted by the Ministry of Defense, Moscow tracked Pyongyang’s rocket launch, which was carried out in the direction from the borders of the Russian Federation and was not dangerous for the territory of Russia.

The previous launch of the Hwason 14 rocket of the DPRK produced 4 July.

Ctrl Enter
Noticed oshЫbku Highlight text and press. Ctrl + Enter
We are
Kim Jong Il awarded the title of Generalissimo of the DPRK - posthumouslyKim Jong Il Dies
182 comments
Information
Dear reader, to leave comments on the publication, you must to register.