American lawyers are attacking Russian hackers, and Putin has ceased to be the face of Hollywood

July 25 2017
6
According to The Hollywood Reporter, Putin’s face was cut from scenarios of major Hollywood films. The decision is all the more surprising because it was made not because of any particular cinematic sanctions against Moscow, but because of the panic over Russian hacking: how many times will the Kremlin respond to Putin’s imprinted image! Only one company is not afraid of Russian hackers in the US - Microsoft. She applied against "Fancy Bear" a new weapon - legal. 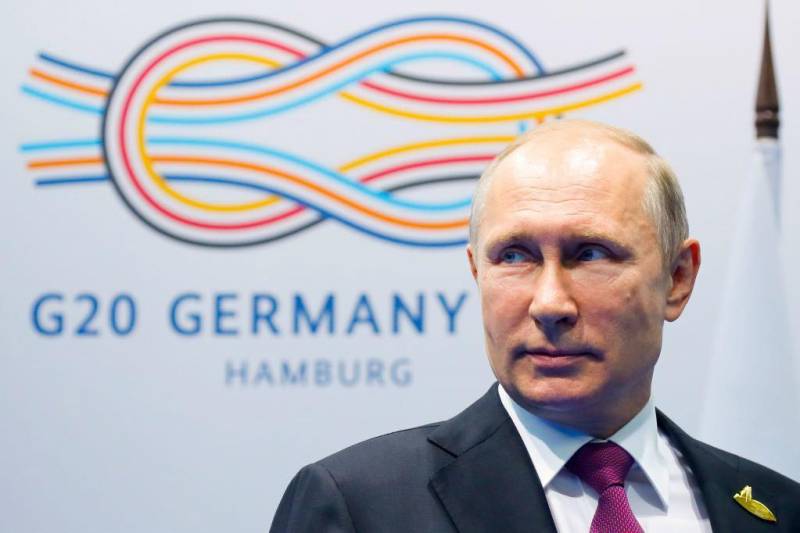 He is afraid even in Hollywood. Photo borrowed from «The Independent»

British newspaper «The Independent» reports that Hollywood film studios cut out episodes with Vladimir Putin from two main films. It was made out of fear of possible Russian hacking.

The two largest films that the public was waiting for were Red Sparrow and Kursk (about a sunken submarine). It was known that in the outcome of the material Putin was present in both pictures, but now his image fell under scissors.

Do you think the Hollywood nerves are no good for hell? Perhaps the townsfolk no longer remember the events of three years ago, but they did not forget anything at the film studios. They are well remembered by the sharp reaction of computer hackers to the 2014 release of the “Interview” picture, where James Franco and Seth Rogen played. It was a comedy-farce, where the plot killed two of Kim Jong-un. As a result, hundreds of letters from Sony were stolen by hackers. There were even rumors of a short world war. At least the threat was in the air.

This situation does not want to repeat any studio in the near future. This explains the current “extreme caution towards Vladimir Putin” in Hollywood, the newspaper notes.

The newspaper "The Hollywood Reporter" writes that the Russian leader was really "excluded" from the two main motion pictures. First, from the Red Sparrow (Fox Studio), where Jennifer Lawrence plays a Russian spy, who then became a double CIA agent. The plot is an adaptation of the novel by former CIA officer Jason Matthews. Putin was a key figure in the original book, but he was "quietly cut out" from the film version.

A similar case - with the film "Kursk" (studio "EuropaCorp"). This is genuine история about the Russian submarine that sank in the Barents Sea in 2000 year. On board all died. The publication notes that Putin "played a significant role in the events of that time." Putin was also present in the source material, in Robert Moore’s best-selling book “Time to Die,” and was even shown in earlier versions of the script. However, in the finished film Putin, we will not find!

The irony is, the British publication indicates, that Hollywood's nervousness "is not consistent with his current Russian obsession." Studios are looking for scenarios that best reflect the current political climate and intrigue. For example, a film about spies is being prepared: an American journalist travels to Russia and becomes the Kremlin’s tool. The film is dedicated to the idea of ​​fake News and misinformation campaigns. Apparently, Putin will not be there either.

However, Microsoft is not afraid of what Hollywood is panicky about. Truly fearless people work there: they even went on the attack on the “Kremlin hackers”. 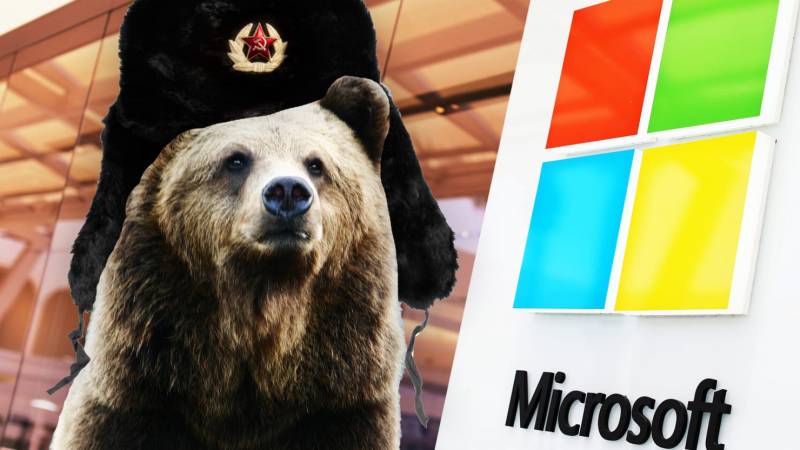 On the contrary, Mycroft responded to the “Russian hacker group”, according to "The Daily Beast".

Microsoft launched an attack on Fancy Bear, a Russian group of hackers. The fight is conducted with the control of "foreign spies" over domain names, writes journalist Kevin Poulsen.

In its anti-hacker attack, Microsoft puts pressure on “hackers from the Russian government,” the very ones who are behind the interference in last year’s elections. More than 120 new targets have already been identified for the Kremlin's cyber espionage. The company secured the "control segments of the Putin hacker apparatus."

How did she do it? It turns out that Microsoft has something more formidable than malware written in Moscow. And this terrible weapon is lawyers!

Last year, lawyers for Microsoft, a famous software maker, took the lawsuit against a group of hackers Fancy Bear. It was done without fanfare, in a federal court outside of Washington. Lawyers blamed the hacker group for computer hacking, cybersquatting and violation of the Microsoft trademark.

No, no, lawyers at Microsoft are not so naive to try to drag Russian hackers to court. The lawsuit was just a tool aimed at what the lawyers called the “most vulnerable spot” in spyware operations “Fancy Bear”: control servers that hackers used to disguise the spread of malware on victim computers. These servers played the role of iron spies in Russian cyber espionage operations, the publication indicates. At first they “patiently waited” for the contact, then issued encrypted instructions and accepted the stolen files.

Since August, 2016 of the year, Microsoft has repeatedly used its lawsuit to seize control of the seventy control and control points held by Fancy Bear.

As we see, the approach of the corporation is not direct, but effective. Instead of physically arresting the servers that the group rented from data centers, Microsoft seized the domain names that led to them. Examples of names: livemicrosoft.net, rsshotmail.com. These addresses of the guys from "Fancy Bear" registered worldwide under false names. Domain names that fell under the control of Microsoft were redirected from the Russian servers to the servers of the American company. Thus, hackers were cut off from their victims, and Microsoft received a complete picture of the network of “automatic spies”.

In other words, as one of Microsoft’s lawyers explained in court, Stephen Jenson, at any moment when a computer infected with a virus tries to contact the server through one of the domains, it will connect to a secure server controlled by Microsoft employees.

It turned out that “Fancy Bear” focuses its malicious programs mainly on the “Windows” system and relies on the “Microsoft” products when choosing domain names - hence, Microsoft has every reason to claim.

The last trial has been going on for several months, but soon a judge in Alexandria, Virginia, will make a final decision of the court regarding a permanent injunction against Fancy Bear.

This group, recalls the publication, is also known as “APT28”, “Sofacy”, “Pawn Strorm”, etc. , World Anti-Doping Agency and countless NGOs. The military and civilian agencies in Europe, Central Asia and the Caucasus are also targeted. According to the American intelligence officers, the loudest invasions of the “bears” concerned the National Committee of the Democratic Party and personally Hillary Clinton last year “as part of Moscow’s efforts to promote Donald Trump to the White House,” the author writes.

However, Microsoft has evaded the definition of Fancy Bear hackers as Russian. Lawyers have identified spies as an unknown "complex and well-resourced organization." However, US intelligence data indicate that the activity of Fancy Bear is directed by Russian intelligence, namely the GRU, Kevin Poulsen notes.

The attack on Fancy Bear seems to be the first high-tech attempt to prevent foreign intelligence operations. In addition to legal weapons, there is also an economic one: Fancy Bear has far fewer opportunities than before, and at the same time, hackers have to lay out more money when Microsoft drowns their domains. The greater the restructuring of their infrastructure, the more expensive cyber spies are for their activities, intelligence experts say.

The cat-and-mouse game has been going on for a long time, and Microsoft is thoroughly analyzing the domain name variants and even adding to the list, which so far includes 140 words that most likely will appear in the new Fancy Bear domains. In order to simplify the process, a retired judge was appointed as an independent “observer” who monitors legal requests for “cutting off” hackers from domains. It is reported that since March last year, Microsoft has taken away the Russian 70 domains.

However, the corporation and the courts have still not been able to expose those who stand behind the name “Fancy Bear”. The 52 agenda of the US courts was issued and 46 made unofficial requests abroad, but to this day Microsoft is no closer to exposing Fancy Bear hackers than last spring. Payment records showed that domains are registered using bitcoin currency or one-time prepaid credit cards; As for the server logs, they tracked the hackers only to the Tor site (browser anonymizer). Microsoft lawyers do not know a single real name or address that hackers would use. Nevertheless, the corporation is confident that the struggle had a "significant impact" on Fancy Bear operations. Americans have some grounds for optimism: analyzing the traffic coming to Microsoft, security experts of the company revealed 122 new actions on cyber espionage. On the other hand, lawyer Jenson believes that hackers will not give up their business and will even "try to grow."

Algorithms computed by Microsoft suggest that Kremlin hackers may use the names infomicrosoftcenter.com, win-newsmail.com, statistic-security-microsoft.com in the future ... The words that the experts have inclined have led to the formation of nine thousand entries!

Is it any wonder that Hollywood has already surrendered in a battle with Putin?

Observed and commented on Oleg Chuvakin
- especially for topwar.ru
Ctrl Enter
Noticed oshЫbku Highlight text and press. Ctrl + Enter
We are
Situational analysis of the death of the MH17 flight (Malaysian Boeing 777), made on the basis of engineering analysis from 15.08.2014The flag is hoisted on the nuclear submarine Severodvinsk!
Military Reviewin Yandex News
Military Reviewin Google News
6 comments
Information
Dear reader, to leave comments on the publication, you must to register.