July 17 2017
7
According to Trump, Putin would prefer to see Hillary Clinton rather than him, Trump, as the American president. Mr. Trump is “unpredictable,” and Hillary is known for her “stability.” In addition, she would not promote the export of US energy. Trump’s greatest “unpredictability” is, however, such statements by an amateur politician who didn’t even ask what the predecessors of his administration were doing. As Secretary of State, Hillary just specialized in energy and lobbying the interests of US energy companies. 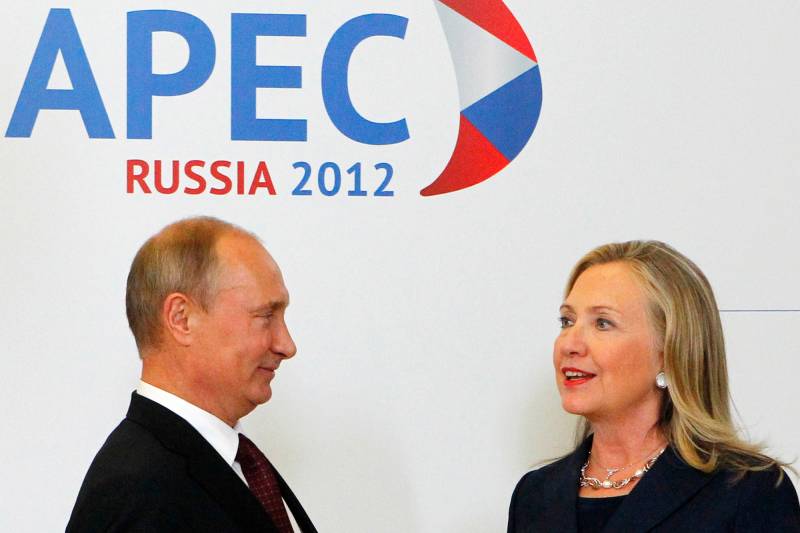 The subject of Trump's refusal of the "fight on the fists" with Putin, the "backing" of the American president, as well as his ridiculous statements that the Kremlin would prefer to see Hillary Clinton not as his president, because policy, bypassed all the major Western media - from the United States to Europe. According to Trump, the rule of Hillary, who would not trade in gas and oil, but “windmills”, would lead to an increase in world oil prices, and the Russians would benefit from this. In addition, Hillary would have destroyed the American army, which Moscow too would have liked.

Analysts ridiculed another stream of consciousness of Mr. Trump.

Here is this theory in a nutshell: “The stability of a well-known adversary against the unpredictability of an impulsive beginner.”

In two interviews, President Trump said that the President of Russia would prefer to see Hillary Clinton in the White House. Even if this is true, it is not for the reasons that Trump mentioned, Bershidsky believes.

The argument of the current president of the United States: during the election campaign, he "advocated a strong army, strong borders and low oil prices", and these goals are disadvantageous to Putin. The journalist quotes Mr. Trump:

“Look what I did: oil prices have fallen. We ship LNG to Poland, large shipments are going to Poland. This is not what Putin wants. And for the military, we have the technology, in the last budget we have a billion dollars more on 56, and this is more than anyone could ever imagine. Putin does not want this, so why does he need me? ”

If H. Clinton had been elected, the American military machine, as Trump imagines it, would have been “destroyed”, and oil prices would have gone up.

“We are going to export energy, he [Putin] doesn’t want it. He would prefer Hillary, and let her sell windmills. He would prefer it, because the price of energy would grow, and Russia, as you know, is very dependent on trade in energy resources. ”

If you base on these two points, military and energy, voiced by Trump, then it is easy to believe that it would not be Trump for the Russians to prefer.

But is it really?

Here are the browser arguments. In contrast to the candidate Trump, the candidate Clinton was not interested in expanding the number and building up the arsenal of the American army, preferring to talk about "modernization". However, Putin "doesn’t care if the US Army exceeds the number of half a million people or not." And he doesn't care if the US Navy has more or less ships. Even during the Cold War, when the Soviet Union was a much larger country than today's Russia, it could not surpass the United States in the field of defense. Today, the US military is significantly ahead of the Russian, and yet the military forces of the North Atlantic Alliance should be added to the US Army. Russia on this background is almost invisible. True, such comparisons "do not matter," since the vast nuclear arsenals of the United States and the Russian Federation prevent the beginning of a full-scale war to the foreseeable future. As for possible local and “indirect” collisions, the total number of forces in them is not important.

We go further. Russia and the United States support different parties in the Syrian war. But there Mr. Trump is doing just what “Clinton intended to do”: to defeat the “Islamic State” (forbidden in Russia). Trump stepped up the air campaign and the support of rebels who are against Syrian President Bashar al-Assad. He made separate attacks on Assad’s troops (ostensibly to keep them from using chemical weapons or attacking US allies; Perhaps this was also done so that the forces supported by the United States would avoid competition for the areas being cleared of the militants "IG," the journalist said. President Barack Obama refrained from such aggressive actions, but Clinton, who proved to be a “Syrian hawk,” most likely would have acted in the same spirit that Trump is currently working on. No wonder she called Assad "priority number one." Conclusion: Putin’s actions would hardly have been expected of such a candidate: after all, Assad is his ally.

As for energy, Clinton "would be equal or even more inconvenient for Putin." She received major donations from oil and gas lobbyists and never demonstrated any fundamental objections to the sale of oil and gas from the United States for export. At one time, Hillary Clinton opposed Republican attempts to lift the general ban on exports, but only because she believed that the government should secure the necessary concessions from the oil industry.

In addition, her love of clean energy would make fossil fuels more accessible for export, and this would probably lower world prices for minerals.

Finally, as Secretary of State, Clinton lobbied for the supply of a variety of energy sources to Europe, that is, to the traditional Russian market. She promoted the interests of the American atomic company Westinghouse and the projects of US oil and gas companies. Being president, she would hardly have become more “friendly" to Russian energy interests.

And politics. Congressional Democrats are now supporting a bill extending sanctions against Russia. This is done in order to include in the list of prohibitive measures projects of energy pipelines. And such sanctions are further evidence that Clinton would probably apply such measures as a response to "Russia's attempt to defeat her in the summer of 2016 of the year."

And the biggest question is: Does Putin prefer the chaos, unpredictability and amateurism of the Trump administration or the predictable, everyday formulas and stencils used by Clinton during her election campaign and probably would have become the basis of her activities during the presidency?

Putin’s distrust of the United States is “deep”, the author believes, and no American leader “can do anything about it.” But will Putin prefer the stability of a well-known, well-studied politician to the possibility of special dividends and unforeseen losses?

One thing is clear: the endless stream of scandals makes Russia too “poisonous” for business relations, as evidenced by the recent decision of the Trump administration to ban the use of Kaspersky anti-virus programs in US federal systems. And if Putin has learned some lesson from the chain of events that followed Trump's victory, then it is the conviction that it is impossible to establish any relations with the United States: after all, American institutions are "inherently hostile to someone like that."

Conclusions regarding Trump and Putin are made by columnist Farid Zakaria (Fareed Zakaria) in the newspaper Washington Post. 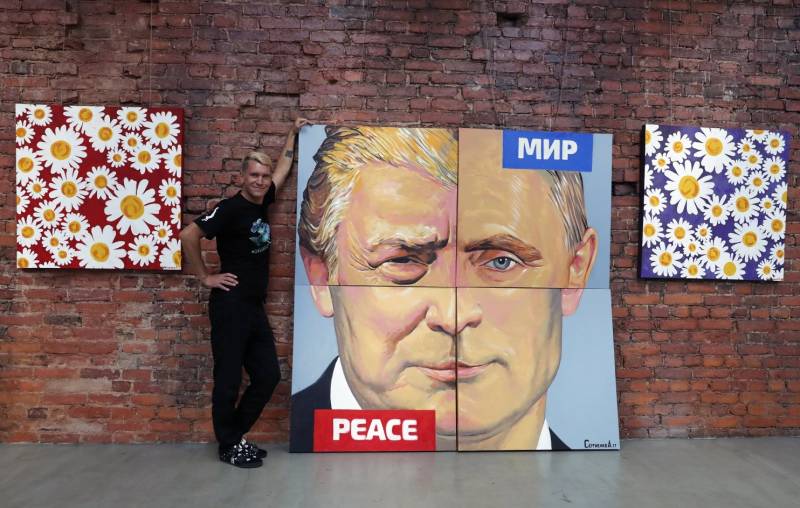 In the article “Why, oh why is Trump so fond of Russia?” The author tries to “solve the mystery” in the center stories Mr. Trump's benevolent attitude towards Russia and President Putin. This kind of “pink attitude” seems to the author to be “unusual.”

It turns out, in contrast to domestic policy, where Trump changed his views, in foreign policy, Trump's views are “beaded and consistent” for three decades. In 1987, in his first major public policy statement, he explained at the same time through several newspapers that “for decades Japan and other countries have taken advantage of the United States.” Trump mentioned separately Saudi Arabia, a country whose very existence "is in the hands of the United States."

If someone disturbs America, he will be declared an adversary and “bombed”. This is the worldview of Trump, from whom he never renounced.

Trump is what historian Walter Russell Mead calls “foreign policy Jackson” (meaning Andrew Jackson). This is a symbolic figure, "skeptical and instinctively hostile towards other peoples and their leaders." America for such a "Jackson" - the essence of the impenetrable fortress. The focus is on the business that America does. For opponents are ready bombs. Point.

This is Trump's main attitude towards the world. The exception was Russia. Ten years ago, when Russian money poured into the West, Trump began to praise this country and its leader: “Look at Putin ... He copes with the restoration of Russia's image ...” Trump admired Putin so much that he imagined how they were meeting. In the election campaign, he stated that "would prefer ... to be friends with Russia." Trump even appointed Rex Tillerson as State Secretary, who was awarded one of the highest awards in Russia for foreigners.

Zakaria, however, does not give his own explanation for such a "rapprochement" of Trump and Putin and "a ten-year flirtation with Russia and its leader." This puzzle, which is now at the heart of Trump's presidency, "will undoubtedly be addressed by special prosecutor Robert S. Muller III." (The indicated lawyer, we recall, is investigating the likely links of D. Trump's team with the Kremlin.)

Even if American analysts cannot unravel the secret of Trump and Putin’s “rapprochement,” they believe that the latter’s foreign policy has long been formed. And Farid Zakaria is hardly right, believing that Russia is some kind of political exception for Mr. Trump. Zakaria must believe that the Trump team still conspired with the Russians, otherwise you will explain the opinion of the observer. In reality, Mr. Trump really does almost all of what she said or promoted Hillary Clinton. And much of this is built on a hostile attitude towards Russia. The White House openly imposes its liquefied gas on Europe and puts it in the wheel of Gazprom. The White House sent troops and equipment to the EU countries - this was planned under Obama, and Trump fully agrees. Donald Trump is the central figure in the new arms race, and he desperately needs the Cold War. Finally, in Syria, Mr. Trump is strongly opposed to Assad.

“Assad must go,” Hillary Clinton loved to repeat. If the Kremlin really wanted to “vote” for Clinton, then Western analysts should solve the riddle not of Trump, but of the Kremlin.

To believe the "pink" statements Trump can not. In the US media for Trump has long been entrenched reputation liar.