Media: Is it expected to sell Uralvagonzavod?

25 May 2017
68
According to the blog bmpd with reference to the online edition RBC, state corporation Rostec is looking for an investor suitable for acquiring Uralvagonzavod (UVZ).


According to RBC, information about this was provided by a high-ranking official of the Ministry of Industry and Trade and a source close to the management of UVZ.

The main candidate is the Kalashnikov Concern, which is owned by Rostec (51%) and Transkomplektholding (TKH, 49%). The owner of the latter is THK-Invest, which, in turn, belongs to Alexei Krivoruchko (50%), Iskandar Makhmudov (25%) and Andrei Bokarev (25%). At the end of April, Rostec decided to sell 26% minus one share from its share of Krivoruchko and Bokarev. Upon completion of this transaction, individuals will control 75% minus one share of Kalashnikov, and Rostec will have a blocking stake.

In relation to UVZ, Rostec is also expected to retain the blocking stake (25% plus one share), the remaining shares will be from “patriotic good investors”.

The source of RBC in UVZ believes that in fact the discussion of the deal affects the person of Andrei Bokarev, to whom Vladimir Putin positively refers, who in April called 2017 the activity of a businessman in Kalashnikov effective.

He is quite such a serviceable Russian entrepreneur, effectively working. Concern put, in general, in such a good position.

This year, 50-year-old Andrei Bokarev, with 1,7 billions of dollars in fortune, is located on the 52 line in the 200 list of Russia's richest businessmen, according to Forbes. According to RBC, referring to a source in the military department, his close friend is Defense Minister Sergei Shoigu. The entrepreneur has assets in the Ural Mining and Metallurgical Company, Transmashholding (annually supplies Russian Railways with up to 70% of products), Transoil, Kuzbassrazugule and Transgroup.

Since the end of 1990, Bokarev has been actively involved in most of the projects of businessman Iskandar Makhmudov and is considered his junior partner. In the 2014 year, in anticipation of a large-scale construction program for the Moscow metro, they received an 100% stake in Mosmetrostroy. In the same year, Transmashholding won in tenders for the supply of cars and the repair of rolling stock of the Moscow Metro for a total amount of more than 7 billion dollars.

In April, 2017, the head of Rostec, Sergey Chemezov, announced the possibility of Bokarev acquiring another Rostec holding.

It is highly accurate. weapon. We are now considering what share it can be sold.

Uralvagonzavod was owned by Rostec 27 December 2016, according to a presidential decree. Then Chemezov explained that the UVZ had “fairly large debts”, formed primarily due to the fact that the plant had established a subsidiary UVZ-Logistic (UVZL), which “bought the wagons for itself”. At the end of 2016, revenues amounted to 132 billion rubles, net loss - 4,5 billion rubles. The cost of the plant is estimated from 150 to 300 billion rubles. RBC believes that all debts of the UVZ are “virtual” in nature and will be written off during the implementation of the UNHCR. 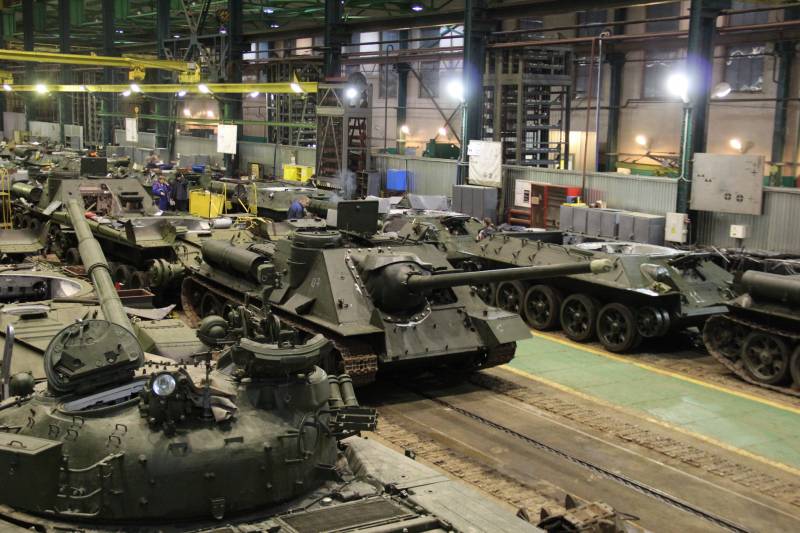 On the contrary, Kalashnikov in recent years has become profitable. In 2016, its revenue amounted to 18,3 billion rubles, profit - 2,3 billion rubles. In this regard, the concern’s leadership can indeed be regarded as a force capable of changing the situation at UVZ. In addition, as explained by the chief editor of the magazine "Arsenal of the Fatherland" Viktor Murakhovsky, UVZ has always competed with Transmashholding, whose president and co-owner is Andrei Bokarev. Apparently, the consolidation of management and part of the assets of enterprises in the same hands will allow to concentrate dispersed orders, resources and production capacity.

On the part of INO, we note that the UVZ declared a categorical protest in connection with the publication of RBC:

The information that appeared in a number of media outlets that the Uralvagonzavod Research and Production Corporation will be transferred to the Kalashnikov Concern is not true. No negotiations on the sale of UVZ shares have been and are not conducted. The corporation initiates an official investigation into the dissemination of false information.
- explained in the press service of the enterprise.

We are in Yandex Zen
Concern "Kalashnikov" modernizes production and expands the range of products
The action “Military service under the contract is your choice!” In Rostov-on-Don: future contract servicemen, exhibitions and “Russian Knights”
68 comments
Information
Dear reader, to leave comments on the publication, you must to register.