February 13 2012
20
Tanks, which appeared during the First World War and was used to support the infantry, very soon became the main weapon of the ground forces. But it’s known that the appearance of any new species weapons certainly entailed the development of means to counter it. No exception and tanks. At the same time, in World War I, the first anti-tank weapons appeared - rifles. Over time, these funds developed. And today, the advanced armies of the world use a large arsenal of various means to fight tanks and armored vehicles. In the 80-90 of the twentieth century, the holding of local military conflicts showed that the use of maneuverable and light anti-tank grenade launchers with cumulative ammunition is the most effective means of anti-tank weapons systems of most armies in the world.

Anti-tank grenade launchers are recoilless smooth-bore launchers. Grenades with cumulative, thermobaric and fragmentation warheads are used as ammunition. After the adoption of a grenade with high-explosive and fragmentation effects, anti-tank complexes became multipurpose.

Similar tools were developed in the Soviet Union in the 30-ies of the twentieth century, but they were never accepted for service. The first grenade launchers appeared in the German and American armies. In the Soviet armed forces, this kind of guns appeared at the end of the 40s, but it did not have any outstanding characteristics. And only in 1961, the RPG-7 was created, which became the most common type of anti-tank weapons in the world.

Немного stories. In 1944, work began on the manufacture of an anti-tank grenade launcher, which included a cumulative PG-70 grenade and a LPG-44 grenade. Studies were conducted at the site of the Main Artillery Directorate. He supervised the work of G. P. Lominsky. An over-caliber grenade of 70 caliber of millimeters was charged from the muzzle of the gun. Gun black powder was used for propellant ammunition and placed in a tube. Hard stabilizer leveled the trajectory of the grenade. RPG-1 was a reactive reusable system having a barrel length of 1000 millimeters and 30 mm caliber. The trigger mechanism with a trigger, aiming plate and thermal protection pads were attached to the barrel.

After conducting field studies in 1944-1945, the weapon received the official name - RPG-1, and the grenade - PG-1. It was planned that the complex will be launched into serial production. However, since a lot of time was spent on reworking the ammunition for the gun, and the work was not completed, the grenade launcher was not accepted for service. 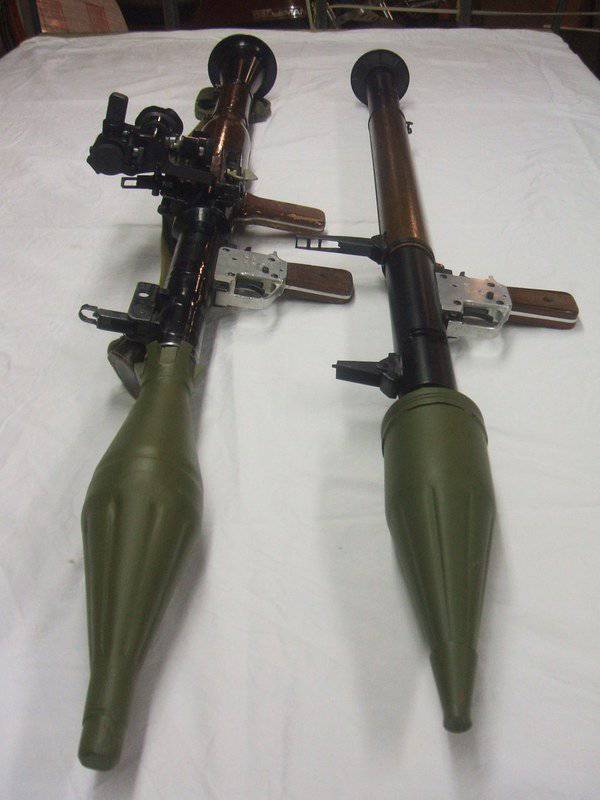 RPG-2, which was adopted in 1949 year, was widely used in a large number of countries, including in Vietnam and the Middle East. The only ammunition that could be used in this gun was the cumulative PG-2В anti-tank grenade, which has an over-caliber warhead. A grenade was launched using a black powder projectile, which was in a cardboard sleeve. He was transported separately and joined only immediately before charging the gun. The grenade was dynamo-reactive, that is, it was fired according to the recoilless design. Before the shot, the trigger, which was behind the fire control knob, had to be manually cocked.

A new version of the guns began to be developed at the GNPP "Basalt". At that time, the development of an 45 caliber grenade launcher RPG-150, in which a PG-150 grenade was used as an ammunition, was being developed. As soon as tests were conducted, the complex received the official name RPG-4.

He already had a charging chamber, which together with the increase in caliber made it possible to increase the firing range and speed of the grenade. Just as in the previous version, the trigger mechanism was used. Aim shooting was carried out with the help of a mechanical sight. And in order to avoid burns during the shooting, were provided plywood lining, which were attached to the trunk. The warhead was cumulative, and the stabilization of the grenade in flight was achieved thanks to the six blade blades.

In 1958, military tests were conducted, and in 1961 - ground tests. Overall, the results were satisfactory. But by this time the first test results of the RPG-7, which was significantly superior to this grenade launcher, had already appeared. Therefore, the RPG-4 was not adopted. 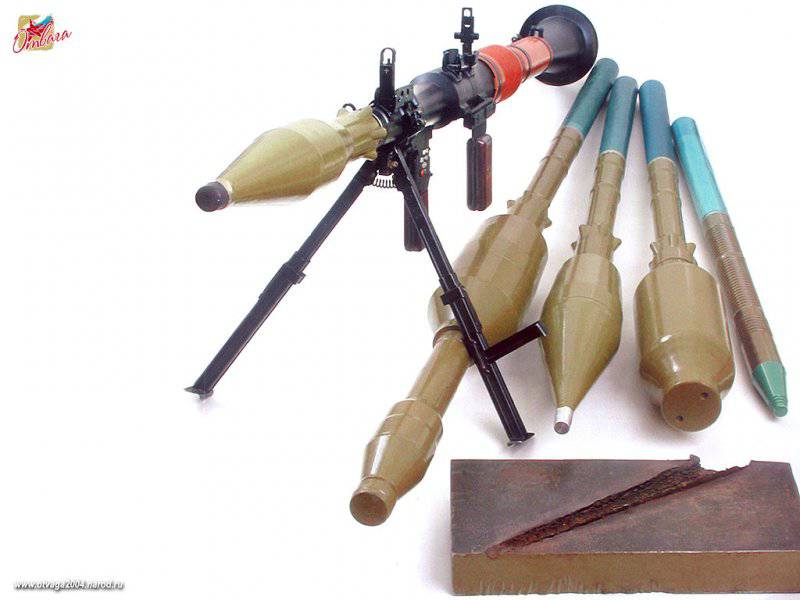 In 1958, the development of a new grenade launcher began, and in 1961, it was adopted by the Soviet troops under the name RPG-7. Until now, it is the main type of anti-tank weapons, not only in Russia, but also in the 50 countries of the world. Production of RPG-7 is carried out in Bulgaria, China, Iraq, Romania. Therefore, its ammunition is used a variety of types. In addition to cumulative, thermobaric or detonating, high-explosive, incendiary grenades are also used.

The RPG-7 anti-tank grenade launcher is a recoilless single-shot smooth-bore device that has an open rear barrel. Since the shooting is done from the shoulder, there is a special heat insulating casing in its middle part. The back of it is equipped with a nozzle for ejection of powder gases and a handle to hold. In the front part there is a fire control grip, equipped with a trigger mechanism with an open trigger. Despite the fact that there is an open sight in the grenade launcher, it is additionally equipped with a PGO-7 optical sight.

For use in the air force, an RPG-7 grenade launcher was created, which has a detachable barrel. Modern versions of the RPG-7B1 grenade launcher have advanced sights, equipped with additional scales for heavy grenades PG-7BP and TBG-7В and having light folding bipods.

Grenades for RPG-7 have combat units of caliber from 70 to 105 millimeters. The back has a caliber 40 millimeters. Solid propellant jet engine is in the middle. With it, and carried out the acceleration of grenades along the path. The grenade is launched with the help of a dynamo reactive projectile, which is in a cardboard sleeve. During the shot, a part of the powder gases leaves the nozzle, so a danger zone is formed up to the 20 meters behind the shooter. The rocket engine starts automatically at a distance of about 15 meters from the shooter. The trajectory of movement of grenades is stabilized with the help of folding stabilizers, as well as due to the rotation of the grenade itself.

The anti-tank grenade launcher can be effectively used by one person, both against armored vehicles and tanks, and against various fortifications (it is known that modern types of grenades can pierce walls up to 1 meters thick).

The high effectiveness of the RPG-7 was proved by the recent military conflicts in Afghanistan, Iraq, and Chechnya. The grenade launcher itself is considered to be one of the best examples of this type of weapon due to its simplicity of design and use, as well as the fact that a variety of high-performance ammunition is constantly being created for it. 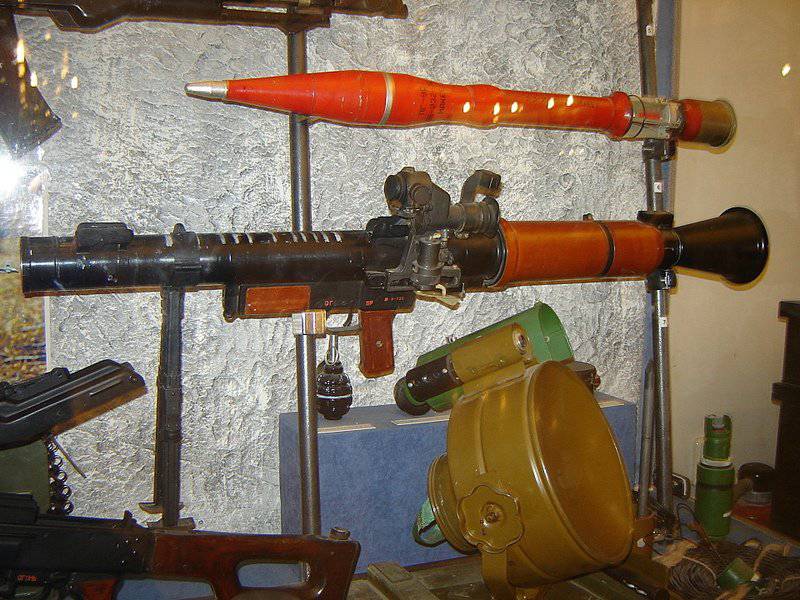 RPG-16 is an anti-tank rocket launcher designed specifically for the military landing of the Soviet troops. Its development was carried out in the late 60-ies of the twentieth century. It differed from the RPG-7 in that it had a large-caliber collapsible barrel and a caliber grenade, which had a cumulative warhead. The grenade launcher was distinguished by greater accuracy and firing range thanks to a more powerful jet engine. For this grenade launcher, only one grenade was used - the active-reactive cumulative PG-16B grenade. The RPG-16 was particularly popular in Afghanistan, where Soviet troops used it to destroy firing points and fortifications. In order to ensure higher accuracy of shooting, the set of the complex additionally included a bipedal folding bipod and an optical sight PGO-16. In addition, the grenade launcher has in front of the barrel open folding sights. The trunk itself consists of front and rear parts, which can be disconnected in the case of carrying. The RPG-16 is a smooth-bore starting single-shot recoilless device that has an open barrel in the rear. Since the shooting is carried out from the shoulder, the back part is equipped with a special heat insulation casing. Also in the back there is a nozzle for powder gases, and in front there is a firing mechanism and a handle for controlling the fire. Near USM on the left side there is a manual fuse. The grenade fits completely into the barrel. 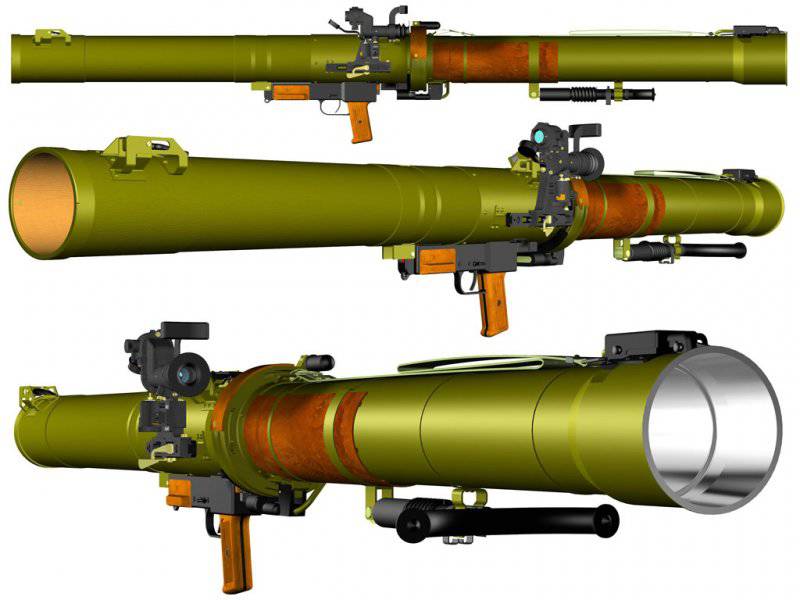 In 1989, another type of grenade launcher was adopted - the RPG-29 anti-tank rocket launcher. Its main goal is the most modern types of tanks with powerful armor and dynamic protection. The ammunition for him is also different from the usual cumulative grenades. This complex is a logical continuation of the RPG-7 and RPG-16. But at the same time it has its own characteristics. It is not only larger in size, but also equipped with two cumulative combat units that are located one behind the other. The first one is small and is designed to destroy the anti-cumulative screen or reactive armor, and the large one directly affects the tank itself. Just like the RPG-16, this grenade launcher has a split caliber barrel and an electronic firing mechanism. At the same time, the PG-29B grenade, unlike its predecessors, is purely reactive. The charge of a jet engine is completely burned out while the grenade is in the barrel, and the received energy is enough for more accurate and greater firing distance. The grenade is stabilized in flight with the help of eight stabilizers that are in the tail. The grenade launcher is equipped with a standard optical sight, in addition, there is also additional sights on the barrel. And in order to provide greater ease of shooting from a prone position, the rear part of the grenade launcher is equipped with a folding bipod.