The last spurt. The June offensive of the South-Western Front 1917 r. 2. Russian army: the power of technology and weakness of spirit


At the end of 1917, the Army had 205 infantry and equivalent divisions (69 army and equivalent corps), 48 cavalry divisions and 7 individual brigades (10 cavalry corps), a significant number of technical and special units and formations.

By 1917 and in 1917, there was a significant technical strengthening of the troops of the Army.

In 1916, a special purpose heavy artillery corps (TAON) was created as part of 6 artillery brigades and other technical units. By the spring of 1917, it had 338 guns of various calibers and purposes. Being out of submission to ordinary military units, the TAON was at the disposal of the army command, being the most powerful means of operational reinforcement — the army artillery reserve. 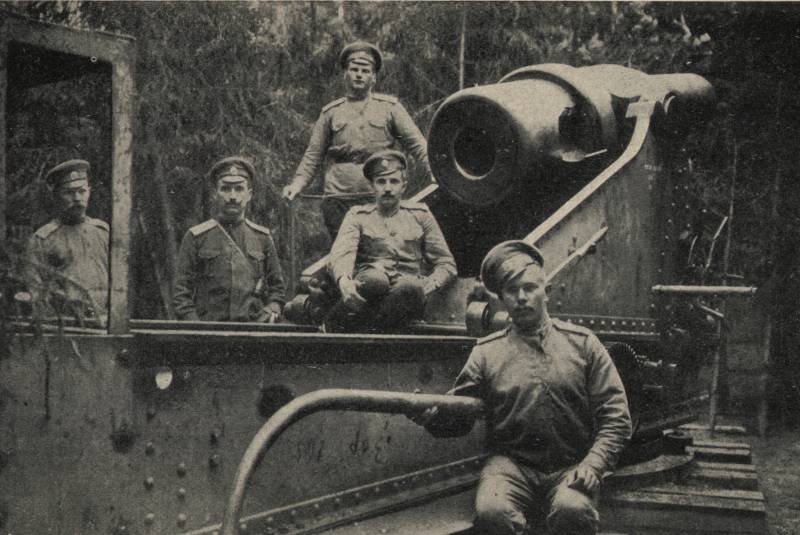 By 1917, the saturation of units and divisions of the Army in action with mortars increased significantly. 47-mm and 58-mm light, as well as 152-mm heavy mortars were used.

By 1917, the artillery of the field army had achieved serious tactical achievements. In particular, the Russian artillery first mastered the new method of shooting - according to calculated data - and 3. 12. 1916 has brilliantly applied it in practice in the area of ​​Dvinsk. Was mastered and the method of artillery shooting on the so-called. close combat areas.

There have been changes in the field of communication. In March, 1917 was created by the Office of the Head of Technical Equipment at the Stavka, who organized the work of the telegraph and radio telegraph in the army, providing telegraph and radio parts, accounting for specialists and property. In September, the 1917 Office was reorganized into the Department of Radio Telegraph Service of the Army. The wireless telegraph was being used more and more widely - for example, for correcting artillery fire by airplanes. 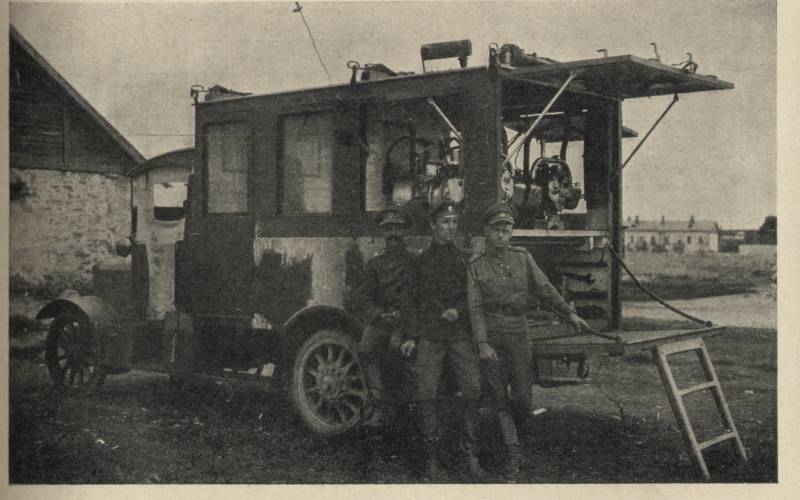 By the end of 1916, the camouflage had penetrated deep into the army in force — most units were trained by the so-called. "Kraskomovkirovki" The use of the paintbrush, which allowed mass coloring of various surfaces, helped the masking to take its rightful place at the forefront. The camouflage business reached a special development on the South-Western Front, where, thanks to the activities of military engineer KI Velichko, since October 1916, intensive training of the troops began to be disguised. 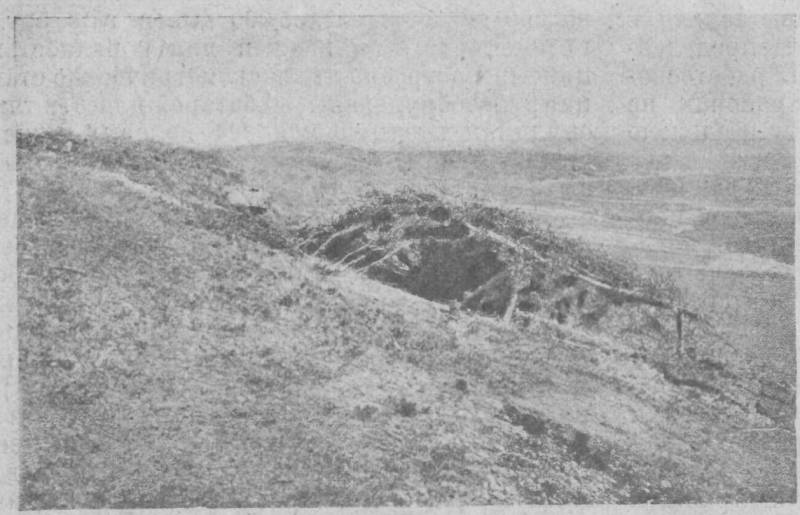 With ammunition, the situation at the front gradually improved, and from the second half of 1916, it became satisfactory. It was in 1917 that Russia copes with the difficulties of meeting the needs of its army in relation to shells of light and medium caliber, gradually freeing itself from foreign dependence. The first type of shells comes in this year over 14 millions (only about 23% from abroad), and medium-sized guns over 4 millions (with the same percentage of foreign production). In relation to the shells to the guns of the TAON, the amount of ammunition ordered from outside was 3,5 times the productivity of the domestic industry. In 1917, shells to 8 guns - 12-inch caliber came into the army around 110000.

Organizational and quantitatively increased aviation force.
Thus, in the Summer Offensive, the actions of the South-Western Front supported 38 of various squadrons (226 aircraft). In the summer of 1917, the Russian pilots won the 23 aerial victory, losing 8 of their cars. 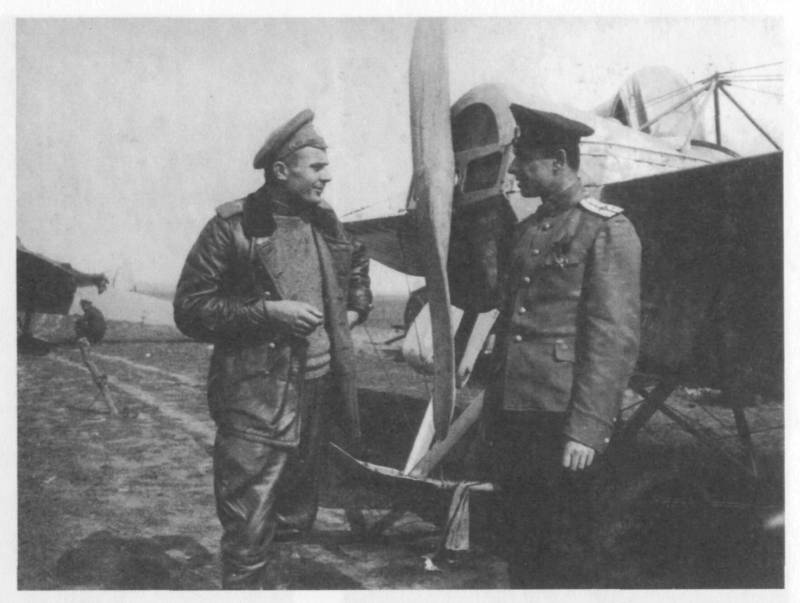 Thrown to the right der. Malovody on the threatened area, 3 th scooter battalion discards the oncoming German 114 th Infantry Regiment, takes the ferry and leads the battle until dark.

Thrown onto another threatened area, the 5 th scooter 3-x battalion of the company, incomplete, on the outskirts of the village. Malovody faced with the oncoming German infantry regiment 143. Without a shot, with a rapid bayonet attack, the battalion overturns the German rifle chains and drives the Germans 3 km, ending the destruction of the enemy until its reserves approach.

The battles of 20 and 27 of the scooter companies of July 6 under der. Streams and 8 on July at Shchetov-Vybuduv.

6 of July, the company fought a hard battle under the village. Streams. Having repulsed the attacks of the Austrians, the transfer of 7 machine guns to the scooters helped the rifle regiment of the 11 Cavalry Division to the enemy occupied area. Moreover, scooter squads and platoons acted without communication, having destroyed trenches, sometimes compared with the ground.

July 8 scooter companies repulsed the attack of the Austrian 88 regiment, taking prisoners. After digging, they fought until they received an order to withdraw. The companies fully perform the task and 9 numbers participate in the operation under the village. Malovody. 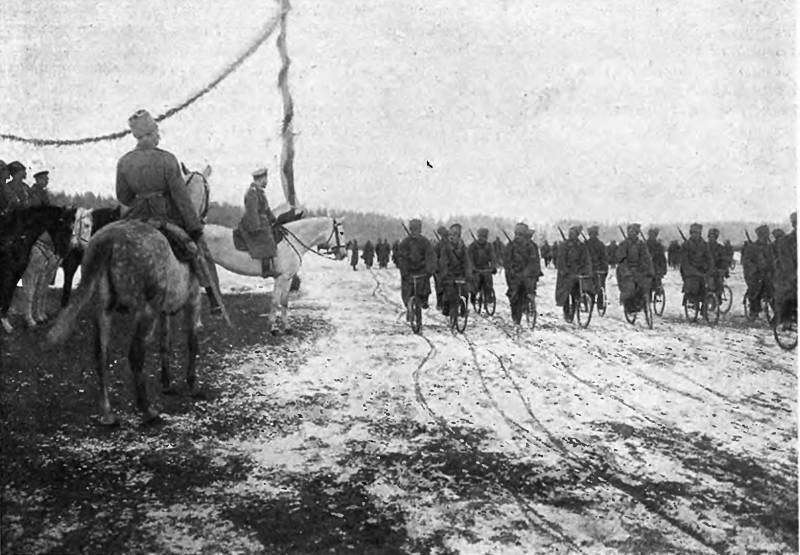 By the middle of 1917, the troops of the current army had 13 armored units (300 armored vehicles) - a fairly solid armored fleet for those times. 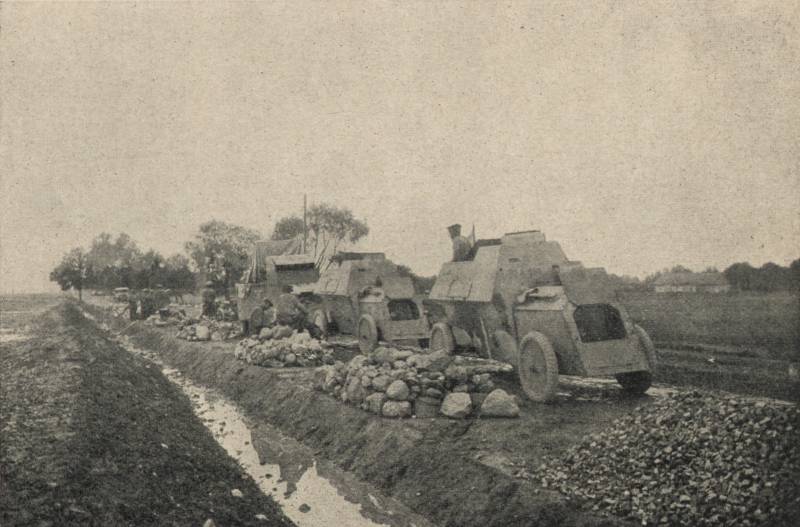 11. Armored cars on the front.

The 1917 year was characterized both by the highest development of the technical component of the current army and the inability to use the combat results achieved due to the decomposition of the bulk of the army.

In order to create effective breakthrough forces in the context of a positional war, and at the same time in the situation of a drop in the combat capability of the main part of the army to have at least some combat-ready units and formations, the Russian command proceeded along the path of formation of shock battalions. In the infantry division was supposed to appear three-tribe shock battalion.

But in the new battalions, the solution of both combat and political tasks in the complex 1917 was combined - it was the shock units (the “death” battalions, the shock companies and battalions, etc.) that became the breakthrough weapon, while the bulk of the army lost its combat capability. Attack units were to not only act on the point of a breakthrough, but also become a bulwark of duty and carriers of high morale. 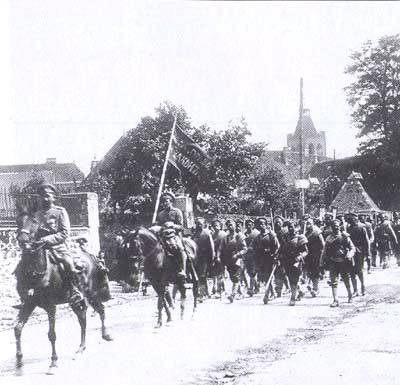 But in a situation where the shock units achieved tactical success, ordinary troops did not support their success, which led to the death of the elite units, and with them the soldiers who could and wanted to fight. Therefore, the offensive of the Russian troops in the summer of 1917 in many respects turned into an offensive almost exclusively on strike units.

Despite the technical growth, the moral and ideological state of the army after the February Revolution began to plummet. 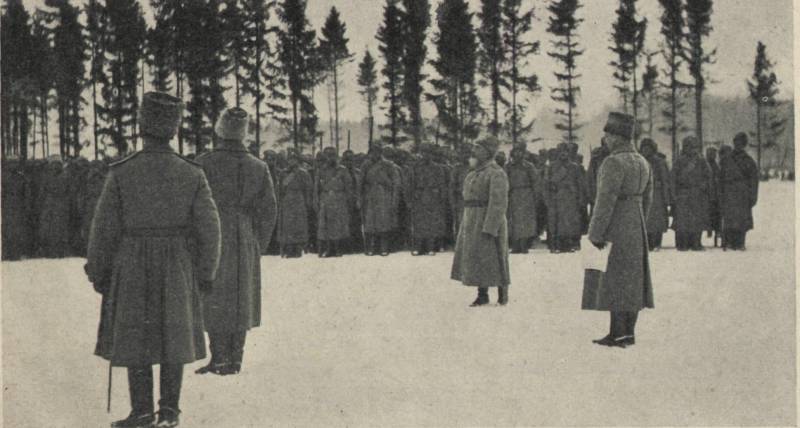 13. Reading the manifesto of the emperor's abdication. 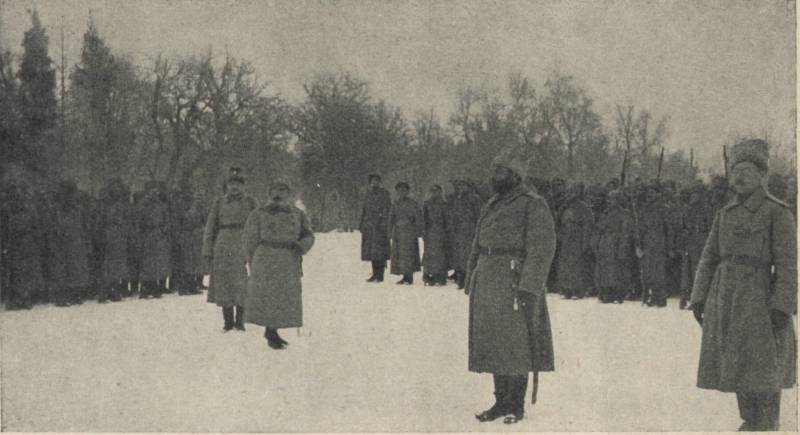 14. The speech of the regimental commander after reading the Manifesto. 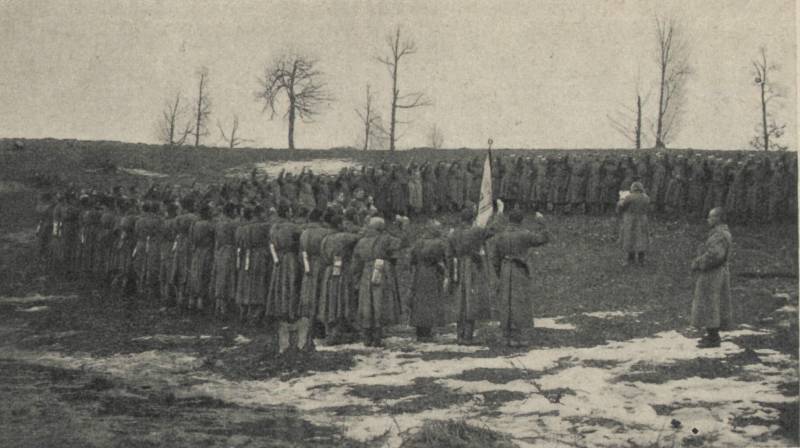 15. Oath to the Provisional Government.

The beginning of the destructive processes was laid by legislative decisions and practical actions of the new government, which was a symbiosis of the Provisional Government and the Petrograd Soviet. This fact was expressed: 1) in accepting the tragic order for the troops No. 1, which canceled the main principles of the military organization, on which any army rests; 2) in the displacement of a large number of senior military leaders (143 man - including such worthy generals as V. N. Gorbatovsky, V. V. Sakharov, V. E. Flug, etc.), by which the highest level of management was disorganized troops (begins a series of movements and appointments, for 9 months 1917 was replaced by 6 Supreme Commanders of the Russian army); 3) in the introduction to the army of electoral origin. All these circumstances, as well as the institution of the institution of commissioners of the Provisional Government, brought chaos on the one hand, and diarchy on the other. 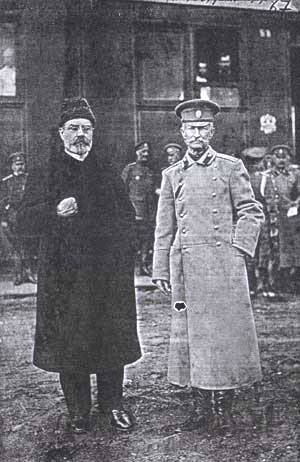 On May 4, a meeting of the commanders-in-chief of the fronts, the Provisional Government and the Executive Committee of the Council of Workers 'and Soldiers' Deputies was held in Petrograd. The front commanders in their reports described the current situation and ways out of the crisis situation. The motive of all the speeches was the same: the army was law-abiding and supported the revolution, but discipline and order must be unconditionally maintained at the proper level. Capable power is the key to victory, and the collapse of the army is a catastrophe in Russia. Understanding of this position by the new leaders of the fate of Russia did not cause, and if it did, it was in words. 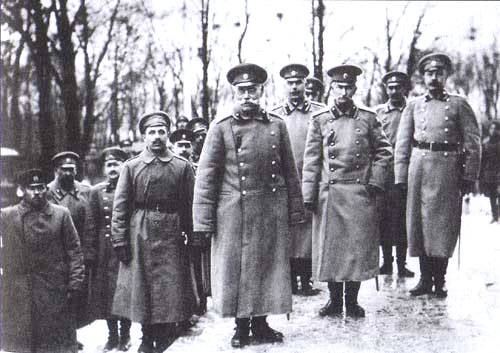 The army, and with it the country, plunged deeper and deeper into the abyss of chaos and multi-power.

After the promulgation of the rights of servicemen in May, the process was even more active - lawlessness, desertion, rallies swept over troops. The rally became the most popular form of amateur soldier masses, taking away a huge part of the time and effort of both the soldiers and the commanders trying to appeal to them. 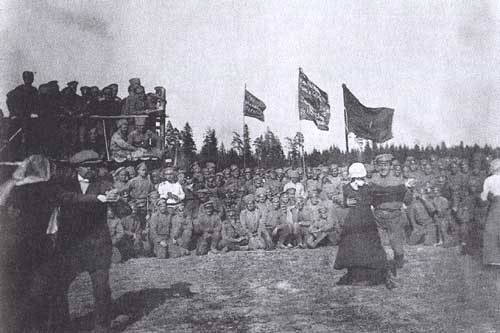 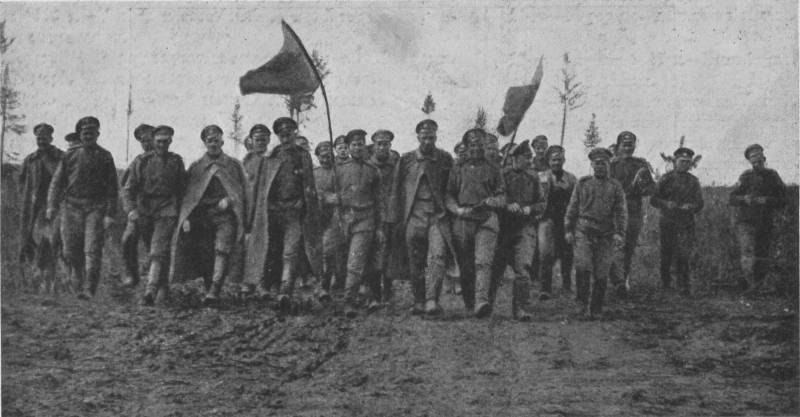 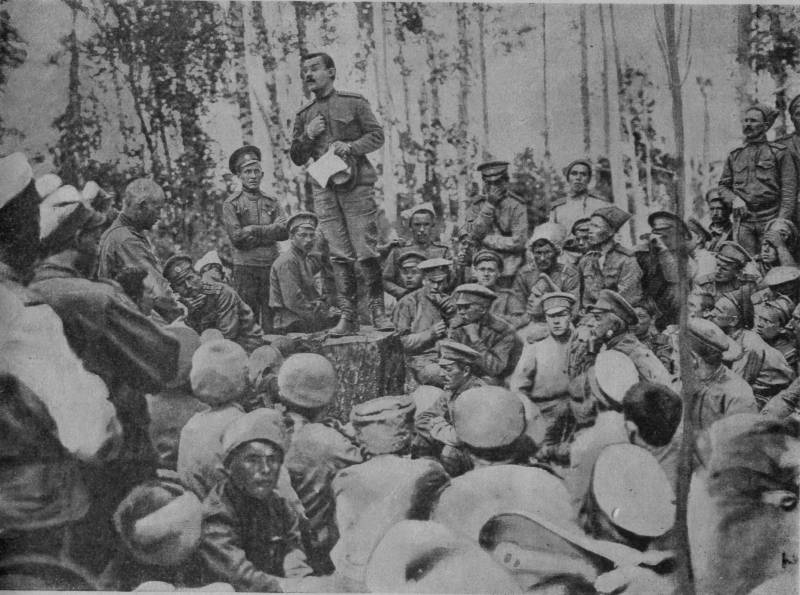 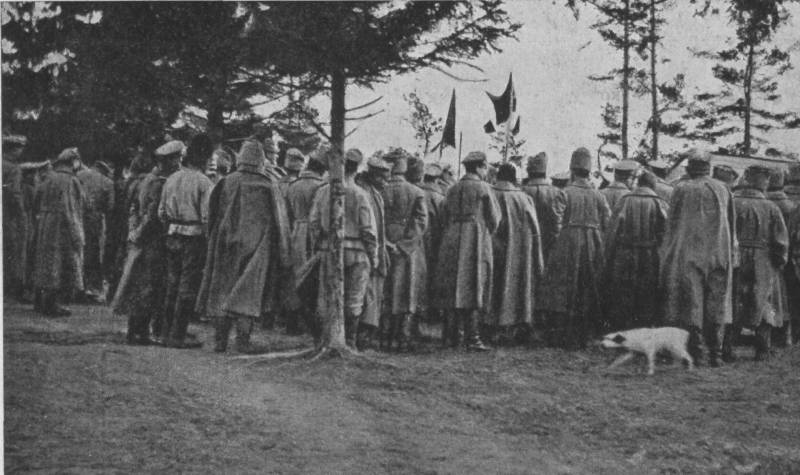 Appear so-called. fraternization, which, on the one hand, is a form of barter with the enemy, on the other hand, are a conduit for the subversive activities of the German-Austrian special services to disintegrate the Russian army and undermine its combat effectiveness.

Brotherhoods at the front were of an ever-increasing nature (from 220 infantry divisions at the front in March, 1917 of fraternization was observed in 165). The fight against them was conducted solely on the initiative of front-line commanders. Field Marshal P. Hindenburg, Chief of the Field General Staff of Germany, wrote: “Our position on the Eastern Front is becoming more and more like a truce, albeit without a written contract. Russian infantry gradually declares almost everywhere that it will no longer fight. But she still ... remains in the trenches. In those places where mutual relations take too obvious a form of friendly relations, from time to time they are firing artillery, which is still subordinate to the commanders ”[Hindenburg P. Memoirs. PG.1922. C. 47].

After the start of the so-called. democratization The current army becomes weakly controlled. Signed for the collapse of the army were: the order of the Petrograd Soviet number 1, abolished the principle of unity of command in the army and introduced a multi-level system of soldiers' committees in military units and ships, as well as the system of congresses of soldiers and officers delegates and the abolition of 12 in March 1917 of the death penalty on the front and field courts. This undermined the combat capability of the army, accelerated its moral decay and led to an increase in desertion.

In the spring of 1917, the soldiers' committees entered into conflicts with the officers and the generals, on their initiative a significant number of commanders were displaced.

The progressive decomposition of the army was accompanied by violence against the officers. In March and November, several hundred officers were killed at the front, as many committed suicide, thousands of the best officers were removed from their positions and expelled from their units. The memoirs of eyewitnesses are full of memories of these tragic facts.

Surprising was the very possibility of active actions of Russian troops in 1917. The enemy recorded a catastrophe in the Russian army (from the destruction of discipline to the fall of controllability). The Germans noted that the Russian troops "are not the same."

A. G. Kavtaradze stated that the state of the army in the spring of 1917 was fundamentally different than before. If before the beginning of a military operation at the front there was no shadow of doubts about the combat capability of the troops and the main difficulty was the relatively weak material and technical support of the hostilities, by May 1917 the situation became diametrically opposite - for the first time during the war material and technical support ( including heavy artillery guns and ammunition) was normal, but the combat capability of troops who did not want to fight was also unsatisfactory for the first time during the war [Ibid. C. 114].

All this in the complex led to the loss by the Russian troops of a significant part of the combat capability.

In such a situation, the June offensive of the South-Western Front was carried out.