Cartridges do not grow on Christmas trees

February 28 2017
87
In a previous article “Will there be enough ammunition for war?” The answer to this question was this: if the reserves of ammunition are estimated at 18-20 billion, then this will be enough for about half a year of a big war in which the entire Russian army will take part. 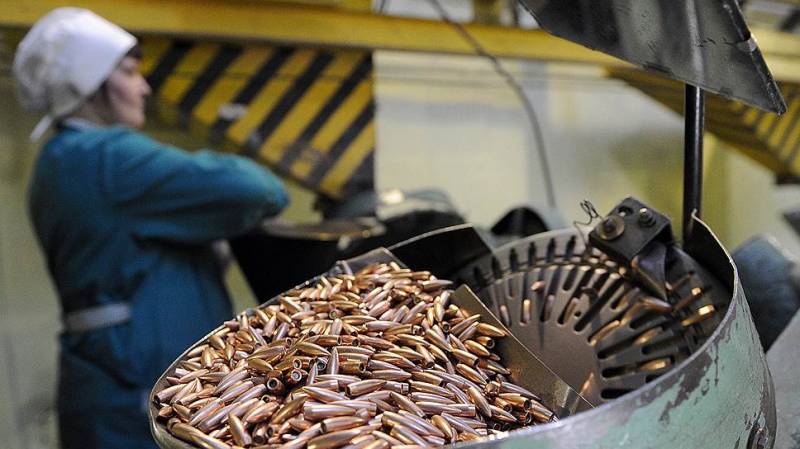 Her discussion was quite active, and the topic itself caused considerable annoyance among many commentators. The overall outcome of the discussion is generally depressing. It turned out that at the forefront in the most important issue of the defense of the army we have put several myths. As if cartridges are so cheap that they are not worth any work. It would seem that the cartridges can produce tobacco and pasta factories (this statement was expressed, despite the fact that it has long been refuted). And also as if the big war will be entirely nuclear, and there no ammunition will be needed. The latter myth may require separate consideration and explanation that nuclear weapon not so all-destructive that after nuclear strikes there would be no possibility of further armed conflict with conventional weapons.

Many people, even those who consider themselves to be well-versed in military matters, do not have a clear idea about the technology of cartridge production, especially about the most difficult part of the cartridge - the case. Although it would seem, it was possible to take an excellent textbook A.N. Malova "Production of small arms ammunition" 1947 of the year to learn about this business a lot of new and interesting.

The technology of the liner is really complicated. During World War II, the manufacture of a rifle cartridge case was 58 operations. The modern 2005 reference book of the year (incomparably worse than the book of Malov) gives 95 operations, including: cutting of the workpiece, folding into a cap, five sleeve stretches, two bottom stampings, three dulz cuttings, flange turning, two varnishes trimming. Between each mechanical operation should be annealing (to remove residual stresses in the metal, which can then lead to the destruction of the liner), after annealing, etching of oxides of burnout, after etching, washing in soda solution, then in soap solution, and then drying and sorting to eliminate rejects. So dozens of operations are recruited, each of which requires its own equipment, technology and workers.

I never cease to be surprised at how complex the production technology of this expendable material of war. In the USSR, a lot of effort was made to automate this technology, even automated lines were created from pre-packing to packing products like KAP Modul and around 50 automatic rotary lines to carry out groups of operations up to 250 units / min. But even these technological masterpieces could not raise the production of ammunition to the level required to supply a multimillion army armed with automatic weapons. It was on this technological base that the Soviet cartridge industry reached the level of production of 6 billion units per year, which was clearly not enough to meet the needs of wartime.

Not long ago there were many experts in Russia who had a universal answer to any problems. They put their hands on their sides and pompously stated: "The state must decide." However, the study of the issue shows that the problem is not solved by this method, since it has technological roots. If you do not revise the technology of production of ammunition, then their abundance in case of war can not be achieved.

One of the solutions to the problem has already been considered and provided for a complete rejection of the metal sleeve in favor of a combustible sleeve made of colloxylin. In this case, mechanical operations remain only for the fraction of the bullet, which is simpler to manufacture: cutting the blank, rolling it into a cap, two hoods, trimming, punching the core and mounting. Kolloksilin, from which a flammable sleeve can be made, is easily pressed into a thermal press, up to and including molding in one operation, with dozens or even hundreds at once in one pass of the press.

This would solve many questions, but so far this option has to be spoken of only as an opportunity. This method requires some research, development work, testing, and the development of weapons for him or alteration of existing weapons for him (initial estimates show the possibility of this option). So for now the problem of manufacturing metal shells has not been removed. In addition, it will be necessary to produce them for a long time. Firstly, because the weapons will still stand for a long time with a metal cartridge case chambered for. Secondly, metal shells will obviously require some types of weapons, such as large-caliber machine guns and automatic small-caliber guns. Even if we start the transition to combustible liners along the entire spectrum of weapons and at the Stakhanov pace, it will still be necessary for a long time to issue cartridges with a metal sleeve. Thus, the simplification of technology is an urgent task.

By itself, the technology of production of cartridges was born in the era of rifles, that is, at the end of the XIX century, and since then very little has changed in essence (although there have been many small changes in it, it suffices to call the replacement of brass with low-carbon steel). The choice of just drawing the liner from the billet was due to the technological arsenal of the time. Then it was the only way to make a hollow and thin-walled part that can withstand high temperatures and high pressure gases when fired. But over the past century, new technologies have emerged that allow us to look at the task from the other side.

So, in essence, the metal sleeve is a cylindrical or conical tube, tightly closed from the bottom. Hence the question: is it possible to manufacture the body of the sleeve just like a pipe, and then close it with a bottom? In principle, this is now possible.

The current industry produces pipes and tubes in the widest range of sizes, seamless and welded. Option One: a seamless thin-walled tube (such tubes are the most durable and are used for pipelines operating under high pressure). First, a blank pipe is stitched, which is then rolled into a tube of the desired diameter and wall thickness. After heat treatment and cutting into blanks, the body of the liner is ready for further stages.

Option Two: welded tube. It can be welded from a strip rolled into a tube, or a spiral-wound strip. So do large-diameter pipes under high pressure for trunk pipelines. However, very small tubular products, such as medical needles, are also manufactured using the same technology. The billet for the needle is rolled up from a steel plate, then it is welded by a laser, after which it is gradually rolled to the required size.

It seems that a single-seam welded tube rolled from a strip or plate of cold-rolled steel is best suited for cartridges. Laser welding, which was not at the birth of cartridge technology, makes it possible to weld thin-sheet blanks firmly and efficiently, and it does this quickly, up to 100 meters of weld per minute, in automatic mode. For cartridge production with its special requirements, welding can be carried out in a protective atmosphere, in order to avoid the formation of slag in the seam.

Further, from the blank, cut by the traditional method for the industry, the bottom of the cartridge is stamped, in which not only the nest for the primer is molded, but also the sleeve for fit into the body of the sleeve. When mounting, the bottom, inserted into the body of the sleeve, is welded by the same laser welding. You can also leave a release under the groove, so as not to perform the operation of turning the liner. Next, the sleeve ends with quite traditional methods: compression of Dultz, heat treatment and lacquering.

The effect of this introduction can be called the rejection of the most difficult and crucial part of the manufacture of the sleeve - a series of hoods. The number of operations for annealing and etching of workpieces is sharply reduced, the most typical defects and defects are eliminated, the volume of waste is reduced. The technology is much easier to automate and increase the pace of production than the traditional approach. This is a necessary condition for increasing output and creating a large supply of ammunition.

It is possible that this article will seem boring to someone. This, however, is understandable, since the overwhelming majority of people who have at least some experience in handling weapons are consumers, not producers of these specific products. But it is necessary that our people do not run wild before the conviction that the cartridges grow on Christmas trees, and had the correct idea of ​​the essence of the matter.