With bayonet or bayonet

February 18 2017
86
In close combat, the Russian soldier was especially dangerous, and the battles of the First World War demonstrated this in full measure.


In the year 1907 appeared (and in 1916-m was reissued) instruction called "Training bayonet combat." In accordance with this document, the skill consisted in the ability to hit his opponent with a bayonet before he struck; in strikes that take the enemy down; in the ability to protect themselves. The compilers paid close attention to technical aspects - fighting stance, strikes, turns and other movements. The emphasis was on strength and accuracy. Moreover, the "Instruction for infantry action in battle" defined: "Movement for striking a bayonet is called an attack." It was required to make it rapidly from a distance of about 50 steps and carry out the rifle chain, if possible reinforced by the reserve. That is, an attack in its immediate meaning is a throw for delivering a bayonet strike to the enemy in melee combat.

Powerful and effective bayonet strike - the "calling card" of the Russian infantry. He practiced in any combat conditions until the end of Russia's participation in world war and decided the fate of many battles.

Thus, during the Galician battle 26 August 1914, the Moscow Life Guards regiment, breaking through the enemy front at Tarnavka with a bayonet, captured most of the artillery of the Silesian Landner Corps (42 guns) and several dozen machine guns. In a fierce battle, the German calculations stood to death and were simply jabbed. The breakthrough of the Austro-German front at Tarnavka had strategic consequences.

The notes of war correspondents and front-line soldiers are full of memories of fierce bayonet battles on the Eastern Front - in the First August Operation in September 1914, under the Bérolins during the Lodz Battle in November of the same year, or on the Bug in July 1915. The German witness conveyed his impressions in this way: “The night battle for height with the 181 mark at Lutomiersk (south of Lodzi) proceeded very dramatically. There were shouts: “Russians are coming!” Began a strong counterattack of the enemy. Substantial forces were attacking ... supported by artillery fire from both flanks. The 94 regiment prepared to withstand the blow and met the attacker with strong fire. This did not stop the Russians. With a fierce bayonet attack ... they attacked the weak German front, breaking through it in several places. ”

In the year 1916 appeared "Instructions for throwing hand bombs and grenades." The document examined in detail the types of this kind of ammunition used by the Russian army, and regulated in detail the processes of preparation for combat and use. 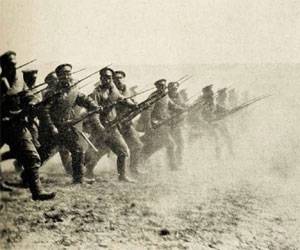 The instruction noted that the grenade was throwing at 50 – 60 steps. The range of action on live targets in open areas is about 5 steps, but the striking force is also maintained at a distance of 30 steps from the explosion site. Since as a result of throwing a grenade into the enemy trench, the earth and stones are flying in different directions, it was recommended to use shelters, folds of terrain.

Russian troops, primarily infantry, effectively used grenades, especially in the second half of the war. Russian grenade throwers excelled during the battles of Baranavichy during the Brusilov breakthrough, in other battles.

A special place was occupied by the battle with grenades in the tactics of assault and attack units. Thus, the “death” battalion of the 38 Infantry Division in the 11 battle of July 1917 of the year was a success thanks to the use of hand grenades against the enemy’s trenches. Moreover, the Russian division inflicted heavy losses on two Germans at once, capturing 38 prisoners.

The bayonet attack and the use of grenades are the elements of close combat, characterized by extreme bitterness. For example, 29 on August 1914, during the Galician battle, four commanders (2, 3, 4 and 12) of the 59-th Lublin infantry regiment were wounded at the same time, killed and wounded before 300 soldiers.

An eyewitness saw the melee field in 1915 year: “Half-buried trenches testify to the horrors of bayonet fighting and the destructive effects of hand grenades. They are filled to the brim with fallen fighters, Russians and Germans. Their bodies are terribly mutilated. Broken trees with bare branches protruding into the sky roll over the whole field. A sharp smell of corpse fills the air. These are the traces of the battle, which were inclined now and then to the other side on the approaches to the bridge south of Ostrolenka. ”

A German source reflected the specifics of the fighting in the Carpathians: “On the one hand, Zvinin’s breathless fighters with extreme tension unsuccessfully fight for their height: they fight chest and chest, acting cold weapons».

The ability to act in close combat was a key factor in the victories of the Russian soldier in many episodes of world war.