February 14 2017
37
In the winter of 1916-1917. on the Caucasian front there was a positional calm. The winter was extremely snowy and harsh. Snow storms in the mountains demolished the tents, brought dugouts to the roofs. Snow teams did not cope with the elements. For a long time the messages with the rear were interrupted, the supply of fuel and food was stopped, the soldiers were starving and freezing. For example, the troops in the Ognot direction were temporarily completely isolated because of the snow drifts, they had to use an inviolable supply of crackers and slaughter horses that were weak from starvation. The troops in positions at times received only 200 g of bread, and horses 600 g of grain. Frequent snowfalls led to casualties among the soldiers. Sentinels froze at their posts during snowstorms. In some sectors of the front, the troops had to be moved to the rear lines, only escort remained at the main positions.


Because of the problems of transport, shortage of fodder, the mass mortality of horses began, which in turn affected the supply of the Caucasian army even more. Food shortages led to an increase in the number of cases, especially scurvy. Due to the crowded location of the troops in the dugouts began an epidemic of typhus. Many people died. By the beginning of 1917, more than 100 thousand people (an entire army) died in the army, dead, ill, frozen and evacuated.

It is worth noting that the position of the 2 and 3 of the Turkish armies was no better. The Turkish army suffered a heavy defeat during the 1916 campaign of the year, replenishment had poor training and fighting capacity, extremely low morale (up to half of the recruits simply ran away). Turkish troops lost the main bases in the Caucasus (Erzerum, Trabzon), were cut off from their rear bases, had extremely poor communications and could not improve them already during the hostilities, as the Russians did. The Turks were extremely poorly equipped, the supply was extremely unsatisfactory, the country's economy was falling apart, which affected the army. Typhoid and typhus raged in the army. As a result, the Turkish army was on the verge of disaster. As a result, only insignificant clashes and reconnaissance searches were observed in all sectors from the Black Sea to Lake Van.

In October, the Russian command 1917 of the year developed a plan of operations, which envisaged a short strike to the Turkish troops in order to hold down the enemy with battle and prevent him from transferring additional forces to the Balkans and Galicia. The British also asked to put pressure on the flank and rear of the 6 Turkish Army in Iraq to assist the British offensive in Mesopotamia. To do this, the Russian troops were to begin offensive operations in Persia at the start of 1917. The operation was to go in cooperation with the British, who were planning an offensive against Baghdad.

The British Expeditionary Army General Mood (4 infantry and 1 cavalry divisions), after a series of heavy defeats from the Turks at the beginning and middle of 1916, in December 1916, went on the offensive to regain lost territory. A large group of colonial troops (totaling about 50 thousand people) moved northwards, on both banks of the Tigris River - in the direction of Kut (Kut-El-Amar). At the disposal of the commander of 6 by the Turkish army, Khalil Pasha, was the 18 corps (about 25 thousand people) under the command of General Karabekir, who occupied the defense of Tigra. During the advance, the British stormed certain fortified positions of Ottoman troops. So, for example, from 6 January to 19 January 1917, they attacked the fortified position of the Turks Khadairi. After fierce fighting and storming a number of defensive positions of the Ottoman army, in February the British approached Kut.

Shortly after the start of the first battles, the Turkish general Karabekir decided not to defend Kut and retreated. The Turkish commander decided not to defend the city in order not to fall into the trap, as was the case with the British troops under the command of Thausenda in Kut a year earlier. February 23 Turkish garrison began a retreat from the city. At the same time, the British managed to capture over 9000 Turkish soldiers. The deputy chief of the German general staff, Erich Ludendorff, then wrote: "In Mesopotamia, it soon became clear that the Turkish army in the Iraqi region was not capable of further resistance." As a result, the British entered the city, but they failed to destroy the main forces of the Turks. After the occupation of Al-Kut, British forces under the command of General Fashion continued an offensive movement towards Baghdad.

The British command offered the Russians to take advantage of the favorable situation and support their offensive with the actions of 1 of the Caucasian cavalry corps under Baratov, who at that time numbered 18 thousand bayonets and sabers with 50 guns (13 battalions and squads, 66 squadrons and hundreds). 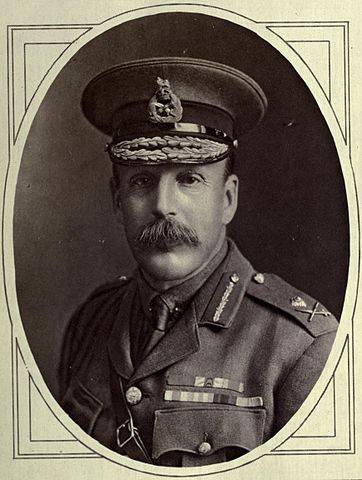 Frederick Stanley Maude, Commander of the British Forces in Mesopotamia 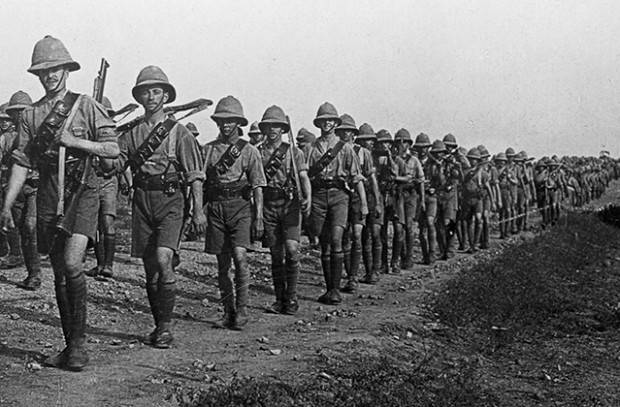 British troops on the march in Mesopotamia

Influence of the February Revolution on the Caucasian Army

The commander of the Caucasian army, General Nikolai Yudenich, planned to conduct a series of operations in 1917, using the previous successes and decomposition of the Turkish army. In January, 1917, he organized an attack on Mesopotamia, which forced the Ottoman Empire to transfer part of the troops to the Russian front, weakening the defense of Baghdad, which was soon occupied by the British.

After the February Revolution in Russia, the Provisional Government associated with the masters of London and Paris (most of the revolutionaries of the Februaryists were Masons-Westerners) did not intend to stop the war. Therefore, the Russian command assured the Allies in the Entente that by refusing to take active part in the European theater until the summer of 1917, it intends to continue the offensive on the Caucasian front. However, the army at that time was not able to conduct offensive operations. The commander of the Caucasian front, 21 March, informed the supreme commander about the sad state of the rear and the disintegration of the troops that had begun, and drew the attention of Stakes to the fact that some units had already been planted on an empty ration since 1916. By the spring of 1917, the famine in the Russian army had reached alarming proportions, causing massive epidemics.

Thus, the myth that the Bolsheviks decomposed and destroyed the Russian imperial army is a deception. The Russian army began to decompose, starve in tsarist times. The soldiers did not want to fight, and thought about survival and returning home. And after February, this process took an irreversible, landslide order. Russia went at full speed towards a state and civilizational catastrophe. The Bolsheviks had nothing to do with this. At first, the tsarist regime got involved in an unnecessary war for the Russian people and cut off the last supports of the empire. Then the February-Westernists, dreaming of power and the “Western structure” of Russia, crushed the autocracy (the last support of the empire) and killed the Romanov empire, and with it all the “old Russia”. The Bolsheviks simply took the fallen power and saved everything they could by creating a new project and Soviet civilization.

The Caucasian army (and the entire Russian army) under the Provisional Government could no longer conduct offensive actions. It is worth noting that Ottoman Amia was in a similar situation. 2-I and 3-I Turkish armies went on the defensive, but their combat capability was extremely low. Diseases raged in the army. The 6 Turkish army in Iraq had only a barrier against the Hamadan against the Russian troops, the rest of the troops acted against the British south of Baghdad.

The beginning of the offensive in southwestern Persia

Despite the fact that the winter was not over yet, Baratov's corps launched an 27 of February on the offensive against the Turkish 2 Infantry Division and the cavalry brigade. Our troops took Hamadan. February 20 parts of the right wing of the corps took Senna. February 25 on the Baghdad direction, Russian troops occupied the entire Kermanshah area. In the meantime, the British took Baghdad. In order to divert the attention of the 6 of the Turkish army from the southern direction, that is, to support the British offensive, from the 7 of the Caucasian Army Corps at the end of February, a detachment of General Nazarov was selected (2 rifle battalion, 18 squadrons and hundreds). The detachment was to operate in the area of ​​Sakiz, with the task of seizing the area Penjvin.

It is worth noting that the offensive was conducted in extremely difficult conditions. The mountainous region of Iranian Kurdistan was ravaged by war, deprived of livelihood and had virtually no roads. The trails were covered with snow in the depth of 4-6 m, the infantry had to lay trenches in deep snow in order to move forward. The rider was completely hidden in the trenches. Trenches again brought snowstorms. The cavalry dismounted, the horses were led by. The pack transports passed no more than 5 km per day. Fighters had to spend the night in snow holes-niches. As a result, Nazarov’s detachment was forced to stop and was unable to complete the task. 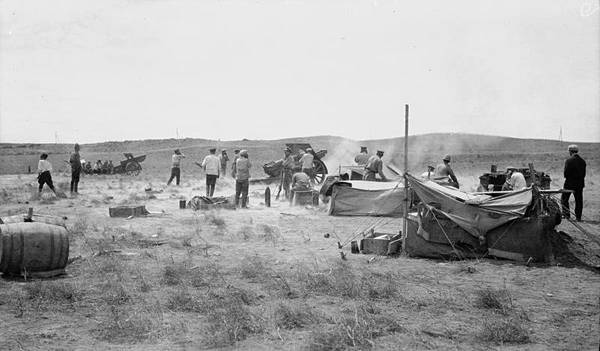 The transition of the Central Powers to a strategic defense
Entente plans for 1917 year: bet on a decisive victory in the war
Russian army to the beginning of the 1917 campaign of the year: the approach of the general collapse
Attack without shot: Mitav operation
How Germany began the unlimited submarine war
German submarine vs UK
How the German submarine fleet tried to crush the "mistress of the seas"
The United States used the myth of "inhuman" submarine warfare to oppose Germany

Ctrl Enter
Noticed a mistake Highlight text and press. Ctrl + Enter
We are
The development of the military-industrial complex of the Russian Empire in the years of WWICossacks and the First World War. Part V. The Caucasian Front
37 comments
Information
Dear reader, to leave comments on the publication, you must to register.