In the name of friendship of nations 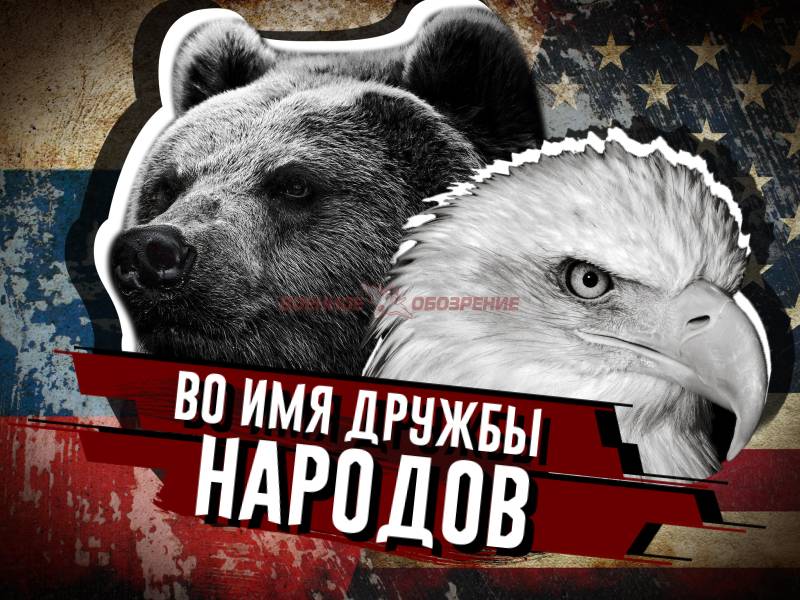 Russia and the United States is difficult to make friends. Some analysts even believe that Moscow may refuse to cooperate with the White House, in which Donald Trump currently sits. The declared pretext for friendship is painfully inconvenient: Russia needs to abandon its partnership with Iran and China.

Why Russia may not want a deal with Trump? On this topic, Nicholas K. Gvozdyov argues "The National Interest".

Despite the “panic warnings” about the imminent “one-sided concessions” to the Kremlin, allegedly prepared by the new president of the United States, nothing of the kind has been observed. No binding agreements between Trump and Putin have been concluded. And this beginning does not foreshadow the easy way.

According to Gvozdev, the National Interest editor and senior research associate at the Foreign Policy Research Institute, one of the most “useful frameworks” for understanding foreign policy is making decisions based on the principle of a “two-tier game”. These principles are described by Harvard University professor Robert Putnam (Putnam). He argued that the leaders of the two countries are negotiating with each other and at the same time “bargaining” within their internal political systems: the freedom of their maneuver in the international arena is limited by the actions of certain subjects in their homeland.

Therefore, today, regardless of how Putin’s relations with Trump (even if they are friendly), it may be that no good will come of it: warm relations between leaders will not have even minimal value if Trump fails to convince the American public. in that his approach might work. Similarly, Putin: he has to convince his society of the need to change the course of Russian foreign policy in order to better coordinate with American “preferences”.

Over the past few weeks, a lot of comments have appeared in the US press on “significant bureaucratic resistance” to Trump’s new team about relations with Moscow. There is already a bipartisan consensus in Congress, which sees Russia as a threat, and Putin as an opponent. In the United States, there are no major interest groups lobbying for improved relations between the two states.

What is happening in Russia?

The author suddenly turns to ... a Jewish topic.

He criticizes in the article the scandalous statements made the other day by the Vice-Speaker of the State Duma of the Russian Federation Peter Tolstoy about the activity of citizens protesting against the transfer of St. Isaac’s Cathedral in St. Petersburg (“by the way, this is the church where my great-grandmother and great-grandfather met for the first time,” Gvozdyov) of the Russian Orthodox Church. The aforementioned Tolstoy described the protesters as descendants of those “who destroyed our churches, jumping out there because of their resilience with Nagan in the seventeenth year ...” These words indicate, the journalist explains that the Bolshevik revolution 1917 was supposedly a “Jewish plot”, carried out with the aim of purging ethnic Russians, and that those who gathered for protests are their ideological descendants. P. Tolstoy’s statement, the author believes, directly feeds on “powerful anti-Semitism”, which represents “not only a danger for maintaining the interethnic and interfaith balance of Russia, but also threatens to disrupt Russia's growing strategic partnership with Israel”.

(The latter, we add, is absolutely true. Israeli officials immediately responded to Tolstoy’s statements: the words of the vice-speaker of the State Duma were commented by the Israeli ambassador to Russia Harry Koren. "This, of course, is disappointing, especially in the sense that the level of anti-Semitism in Russia is much lower, than it was in the old days and much lower than in some countries of Western Europe. Therefore, when it comes to speaking about an official of such a rank, it is painful at best and is perceived much worse, ”quotes Koren. Rosbalt.)

More importantly, Gvozdev continues, it’s the creation of "additional problems for any US administration that seeks to improve relations with Russia."

Although Tolstoy’s comments did not become a storm in the American media, because they didn’t pay much attention, many Jewish-born Americans live in the country, whose ancestors left the same Pale in the Russian Empire and then left Russia to avoid persecution and discrimination. Who knows if the descendants of these people will decide that the United States should not maintain relations with Russia! .. In fact, Tolstoy’s comments are a warning: Russian politicians have a number of tools and may well sabotage any efforts by Putin and Trump leading to detente.

The analyst shows other such tools besides anti-Semitism.

Today, Putin has more real power than the chief executive of the United States. That is, Putin personally has more opportunities to shape the Russian foreign policy program than Trump. Nevertheless, in Russia there are powerful "vectors" that are not ready for a rapid shift in relations.

The Trump administration, for example, hinted that it was interested in establishing closer relations with Russia to get help from Moscow in the area of ​​countering China and isolating Iran.

Russia had historical friction with both Tehran and Beijing, including a series of wars over the centuries. In Russian society, there is still a significant distrust of Iran and China. However, there are influential forces in Russia that will resist the “sacrifice” of partnerships that have arisen in recent years in order to improve relations with Washington. In addition, the Russian defense industry has a vital interest, earning income now, which is hardly offset by improved relations with Washington.

American sanctions created problems for Russia, but she already learned to live with them. Today’s Russia is not eager to “make big concessions” in Syria or Ukraine, hearing “vague promises” about lifting the sanctions from the United States. The limited economic recovery and the state’s success in the privatization of part of the state-owned oil company Rosneft strengthened those who oppose any “premature concessions” to the Americans.

In turn, the Trump administration will find it harder to achieve a change in relations if Trump fails to convince many skeptics in the government that working with Moscow will serve the interests of the United States.

Prospects for a “big deal” in the coming months are only if at least one leader, and better both, “resolutely fight” against the trend that exists in both countries that “works against the improvement of relations” between Russia and the United States.

The White House’s hint of a possible closer relationship with Russia to jointly isolate Iran has recently grown into a thesis, we’ll add. If at the time of Obama Russia was considered the number one enemy of the United States, now Iran has been declared the number one terrorist state.

There was also information about the "wedge", which the White House is ready to drive between Moscow and Tehran.

The Trump administration is looking for opportunities to interfere with the diplomatic and military cooperation between Russia and Iran. This was written by The Wall Street Journal, citing sources in European and Arab countries. “There is a wedge that can be driven between Russia and Iran, and we are ready to consider this option,” сказал Interlocutor publication in the White House.

Then, probably, the Americans will drive a wedge between Moscow and Beijing.

And all these wedges are in the name of "improving relations" between the United States and Russia. In the name of the friendship of nations, to put it old-fashioned.