The bear will turn into a monster 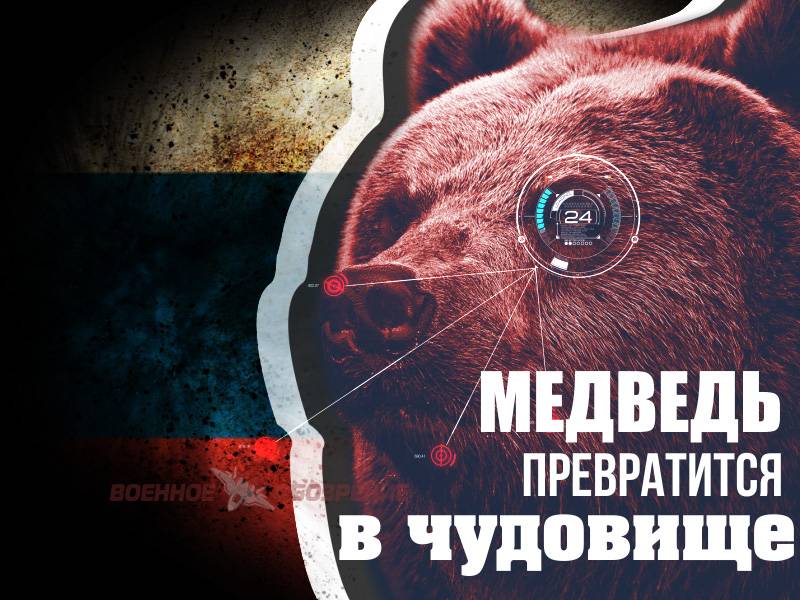 American military experts are panicking: arguing on the possible cancellation of anti-Russian sanctions, they note that after the cancellation, the Russian bear may turn into a “monster”. The Russian defense ministry will gain access to technology, and Putin will further strengthen Russia's military potential.

Patrick Tucker (Patrick Tucker) told about the fears of American military experts about the likely strengthening of the Russian army after the lifting of sanctions. "Defense One".

If Donald Trump decides to withdraw sanctions from Russia, then some key military technologies may again become available to the Russians. This is interpreted by some experts in the military field.

Since last summer, when Trump started talking about a possible US reconciliation with Russia, there are disputes over the lifting of sanctions. The reason is clear: Trump has declared his willingness to consider lifting the sanctions.

Discussion of this issue in the press led to a violent reaction of the military: some of them are seriously concerned about the likely decision of the Trump administration to relax export restrictions weapons and US technology, which "are crucial for deterring the development of Russian military forces and equipment."

During the discussion of the relevant issue, one senior representative of the Ministry of Defense, who worked in the Obama administration, and the former ambassador and one expert on Russia for the company led a number of arguments that show that lifting or easing sanctions can lead to an increase in the power of the Russian armed forces.

To understand the current state of Russian-American relations, it is reported in the publication, one should return to the spring of 2014, “to the secretive march of“ little green men ”throughout the eastern part of Ukraine.”

Russian soldiers, “hiding personalities and working together with Russian-speaking separatist groups”, “brazenly” seized land. In the following months, Barack Obama and the US State Department "introduced a series of economic sanctions against the Putin government." At the same time, the White House sought to curb Russia's military growth by changing the rules governing the sale abroad of so-called dual-use technologies.

As a senior representative of the US Department of Defense said, the export of “sensitive technologies” was restricted, and the US obtained from its allies and partners support for these restrictions in relation to Russia. This has influenced the development of Russian weapons systems of a new generation, the expert is convinced.

Removing the ban for US companies to sell weapons or technology to Russia on the appropriate black list would increase Putin’s military capabilities and make him “a much more capable adversary,” the official said.

Russia already represents genuine military power, but technologically it still lags behind the United States, it is reported later in the material. The technological gap between the countries dates back to the Cold War. Even at a time when Soviet spending on defense corresponded to similar US spending, the United States had the advantage of limiting sales and transferring key technologies. An example is a high-performance microprocessor 80486.

John Edward Herbst, who served as US ambassador to Ukraine during the presidency of George W. Bush, recalled that a decision was made aimed at preventing the Russians from receiving this microprocessor. “It was a crushing blow to them,” the ex-ambassador said. “The same is at stake here,” he believes.

Today, Herbst said, even with sanctions, Russia's military strength is estimated to be the second on the planet. The Russians have "advanced anti-aircraft missile systems, in particular, the C-400 and C-500, and very sophisticated fighters." And there is, however, while in development, the fifth generation stealth aircraft, which will compete with the F-35 "Joint Strike Fighter".

In addition, the Russian military demonstrated a "new destructive tactics using unarmed unmanned aerial vehicles" that operated against Ukrainian artillery. “Their ability to wage electronic warfare by interfering with and intercepting communication signals surprised many Western observers,” said Philip Carber, head of the Potomac Institute for Political Studies and Pentagon consultant on issues related to the Russian armed forces.

Finally, Russia has “tremendous power” in the form of tanks and armored vehicles. Lists T-90, T-72B3 and T-14 Armata. Back in 2014, Russia completed the process of reviving the 1st Guards Tank Army. In September, Russia will send this army to Belarus for mass military exercises. “If they actually implement this event and appear there in September, then you can see the tank army right on the Polish border,” Carber notes.

This is how the “bear” turns into a “monster”.

And if the now forbidden technologies gathered in the black list of the United States get to this bear itself, this will make Russia's already significant forces "even more deadly." And this, in turn, will give Putin more opportunities to “intimidate neighbors and violate international law,” the author believes.

The black list today includes electronic and computer equipment, such as advanced microprocessors and a number of technologies suitable for intercepting communications and fighting “electronic surveillance or control.” Obtaining such technologies would give green men "a clear advantage when planning hybrid war operations."

The list also includes lasers and precision sensors for bombs and missiles, as well as those computers and radar equipment that could make Russian UAVs truly lethal.

Some technologies could improve the ability of Russian intelligence agencies interested in digital data and e-mail documents. Using the latest technology, the Russians would be able to electronically strike "by Western democracies."

However, all these restrictions do not completely block access: Russians can still get the required technologies “from third parties” or even “steal” using “industrial espionage or cyber attacks”, indicates Carber. However, the ban still prevents the Kremlin from obtaining these technologies as a matter of urgency.

The lifting of economic sanctions will help Russia to acquire these materials from third parties, Herbst said.

The article further notes that the White House may cancel changes to the sanctions rules “almost unilaterally”.

If that had happened, the Russians would have extracted the technology and the first thing they would do is to bring their military equipment in line with American goals. The Iskander long-range missiles would be tuned to the Patriot. Russian electronic defense measures and countermeasures would also become more effective against American power: Russian weapons would be much harder to detect.

Mr. Herbst believes that the appointed Secretary of Defense J. Mattis is right when he says that the most dangerous threat to the United States is Russia. The Russians want to “change the order created after the end of the Cold War, now operating in Europe and Eurasia, no, they don’t say it clearly and clearly, but this is obvious ...” Their goal is to weaken NATO and weaken the EU.

Recall that in the 2014 year, the United States imposed a series of sanctions against various Russian defense and commodity companies. In the "black list" appear Uralvagonzavod, "Almaz-Antey", NPO mechanical engineering, the structure of "Rostec", including concerns "Kalashnikov" "Radio-electronic technologies", etc.

Experts believe that the introduction of additional sanctions Barack Obama tried to complicate the establishment of Russian-American relations as much as possible after the change of the White House administration. And today, as we see, US defense experts insist on maintaining anti-Russian sanctions in full scale.