January 18 2017
34
Russian Su-35 fighters equipped with an OLS-35 optical-location system. It allows airplanes, without giving themselves away, to detect air targets from the heat of engines and to hit ground targets with high accuracy with bombs and missiles. 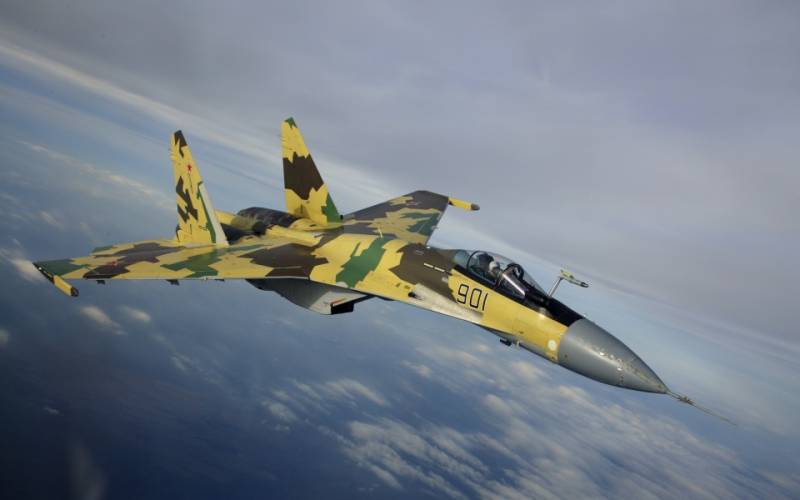 The equipment was developed and produced by the Scientific and Production Corporation “Systems of Precision Instrument Engineering”. It is located in a drop-shaped ledge, mounted in front of the lantern of the cockpit of a fighter pilot. It includes a sensitive video camera, a thermal imager, working day and night in any weather, a laser. The latter is intended not only to measure the distance to the target, but also to create an invisible spot that is “seen” by rockets and bombs with a laser homing head. Air and ground objects OLS-35 detects and takes to escort at a distance of several tens of kilometers. The video image and information received by the station are displayed on the windshield indicator in the cockpit. The key equipment of the station is a high-precision guidance system based on a virtual gyro-stabilized platform. Optical elements of the station are moved by actuators based on thin-film piezoceramics with accuracy measured by micrometers.

The system was successfully tested in combat during the Russian military campaign in Syria. An informed source shared with Izvestia the available information on this subject: - During the fighting in Syria, the Su-35 was not only accompanied by Russian front-line bombers and attack aircraft, but was also involved in delivering attacks on ground targets. The optical-location system has passed all the tests and received high reviews. Using OLS-35, fighters destroyed ground objects not only with high-precision aviation means of destruction, but also the usual freely falling bombs. A pilot using an OLS camera detected a target, determined its angular coordinates, and measured a range with a laser. This information was transmitted to the Su-35 sighting system. Next, the on-board vehicle calculated the necessary parameters for the exact destruction of the target.

According to Honored Test Pilot Roman Taskaev, the first optical-location stations were mounted on the MiG-29 and Su-27 fighters. - With the help of a thermal imaging channel, the station detects enemy aircraft from the heat of the engines, as well as from the structural elements of the aircraft, which are heated in flight. ¬Laser rangefinder determines the distance to the target. This information is displayed in the cockpit on the indicator on the windshield. The pilot, with the help of a special control system, turns the missile's head so that it captures the target. OLS allows, without including fighter radar, unnoticed by the enemy to detect it and strike.
At present, European Typhoon and Rafale fighters are equipped with Pirat and FSO sighting optical stations (Front Sector Optronics). They provide search, detection and measurement of the trajectory of the air targets. But ground target regimes are limited only to range measurement. Multifunctional OLS, working both for air and ground targets, is installed only on the American newest fifth-generation fighter F-35. F-22, as recently reported, in order to save was not equipped with infrared radars search and target tracking.
Ctrl Enter
Noticed oshЫbku Highlight text and press. Ctrl + Enter
Military Reviewin Yandex News
Military Reviewin Yandex Zen
34 comments
Ad