January 18 2017
28
The US Congress approved the candidacy of the ex-head of the Central Command of the Armed Forces (CENTCOM), General James Mattis, for the post of Secretary of Defense. It is noteworthy that a special procedure was launched to appoint the future Pentagon chief.


Under US law, a retired military may be the Secretary of Defense only if it has been at least seven years since his dismissal. And Mattis resigned on 2013. Therefore, his appointment required additional coordination with the Congress and the Senate, as well as separate hearings in the Armed Forces Committee.

Judging by the statements of analysts and experts, the nomination of the ex-general who served 41 was a simple present for the military. There is an opinion that the civilian elite of the Pentagon, in particular the outgoing head of department Ashton Carter, opposed the appointment of Mattis. Reports about the conflict of civilian defense ministers, who little understand in military affairs and approach the armed forces as corporations, have been repeatedly published in the American media. Therefore, the honored general at the head of the Pentagon is regarded as a definite victory for the "military lobby."

Meanwhile, the appointment of James Mattis promises big problems. In fact, the General Marines - an ambiguous personality. Not only abstract “civilian leaders” opposed his candidacies, but quite specific generals in the US Army and the command of special operations forces. The very future head of the Pentagon during the operation in Afghanistan and Iraq earned unflattering nicknames - Poser, The inept public relations man.

In November, the 2001 US Special Forces Branch 574 (ODA 574) was abandoned in Afghanistan. The task for the Green Berets was quite complicated: to assist in the preparation of an offensive on Kandahar for the forces of the future President of Afghanistan, Hamid Karzai. It is noteworthy that the adviser went to the rear of the Taliban, along with ODA 574 and instructors from the CIA. 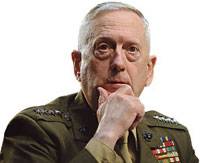 At that time, there were no regular units or units of the US Armed Forces in the country with the exception of the 15 expeditionary detachment of the marines at the Reno facility, an abandoned airfield 190 kilometers from Kandahar. The detachment was commanded by Brigadier General James Mattis.

December 5 as a result of an aircraft carrier error bomb dropped B-52, hit the ODA 574, killing and wounding several soldiers. The command of the special purpose 5 group turned to Mattis with a request for evacuation. But it was refused: they say, the general does not have information about what is happening in that area and does not intend to risk helicopters.

Despite the fact that the headquarters of the special purpose battalion and the Delta squadron, which guaranteed the cover of helicopters from the shelling from the ground, were already operating in the area, Mattis remained adamant. His decision did not change even after he was informed that several wounded needed an urgent operation, otherwise they would die.

For their evacuation, MN-53 helicopters from Uzbekistan had to be used. Two Hercules flew to the Rino object with special medical modules in the cargo cabins and medical teams. Helicopter time on time. However, due to the lack of fuel, the crews were forced to refuel in the air over Kandahar at a height of several hundred meters under the shelling of the Taliban. Well, no MH-53 was hurt.

But Mattis did not want the presence of guests at Rino and banned the landing of C-130 with the doctors. Planes circled for several hours in the air. At some point, the crews decided to sit on their own. Here General Tommy Franks, the head of CENTCOM and the commander of Operation Enduring Freedom, intervened. He made Mattis allow the landing and ensure reception of the MH-53 with the wounded.

But even despite the personal intervention of Franks, as the “green berets” later wrote, Mattis engaged in small dirty tricks. During the medical operation, the AN-1 helicopters of the marines began to warm up the engines, and then fly. This caused the shaking of the medical C-130 and prevented the surgeons from working.

The United Command of the Special Operations Forces (OKSSO) of the US Armed Forces demanded an investigation into the behavior of James Mattis at the Reno site. Some time later, the trial was closed, but Mattis acquired his enemies at OKSSO.

It is believed that the nickname Mad Dog, the reputation of a harsh and brilliant warrior Mattis earned during the invasion of Iraq in 2003 year. But the merits of the general are quite controversial.

Mad dog stuck to him after the publication of the book "Generation of the murderers" (chronicle of the actions of the reconnaissance battalion of marines in Iraq) and the release of the same series. In several fragments, the general is shown as a charismatic leader, not afraid of the danger. Suffice it to recall how Mattis chastised the commander of the regimental group of the expeditionary division right on the bridge under shelling of the Iraqi military.

True, in the memoirs of one of the actors in those events - Lieutenant Nathaniel Fick, these episodes, to put it mildly, are less unambiguous. The general doesn't look like the father of the marines. But the book and the film have played their part - now the successful actions of the Marine Corps in Iraq are attributed to Mattis. Later, the PR effect was anchored in a published quotes collection of the general.

Although the official historiography of the Marine Corps published at the end of 2000 showed that the authorship of the most crucial decisions and the most difficult actions during the invasion of Iraq in 2003 was held by Lieutenant General James Conway, then the commander of the KMP expeditionary forces in Iraq. It was to him that Mattis (at that time the commander of the 1 Division of the Marine Corps) was subordinate, and not vice versa, as indicated in some publications.

No less controversial is the decision of James Mattis during the fighting in Fallujah. Traditionally, the team of the 82 airborne division reportedly failed to pacify the city. To prevent unrest, the Pentagon urgently sent a division of marines led by Mattis to Fallujah, and he completed the task.

After the publication of several papers on Delta operations in Iraq, the situation again looks different. Despite Mattis’s best efforts, fighting began in Fallujah. The Delta special forces officers, then operating in the city, argued that the general was late everywhere. There have already built barricades and imported weapon, and the marines removed part of the posts, so that, as indicated in the order for the division of Mattis, to normalize life. When clashes were to start from minute to minute, the general ordered to patrol without helmets and body armor in order not to provoke civilians and not to show American marines as occupiers.

This decision was widely replicated in the media, as was Mattis’s daily briefing, where he often used his famous “military wisdom”. True, the marines themselves were somewhat disappointed in the komdiv. When fighting in the city broke out in full force, the division of the marines was not ready for this.

It is noteworthy that James Mattis is one of the few lieutenant generals (the highest military rank in the ILC), who did not become the commander of the Marine Corps or at least the castle.

Since 2005, Mattis didn’t actually lead combat units. In 2006, he headed the joint development command, responsible for the introduction of new weapons systems, and then the combined command of forces and assets - in fact, the combat training department.

And if during the administration of George Bush the career of the general faded, then under Barack Obama flourished. True, the attempt to appoint Mattis as commander of the USCI failed due to the tacit resistance of potential subordinates. The ILC is one of the few in the US Armed Forces, where the president appoints commanders, but only in coordination with the corps itself. But with CENTCOM, from whose command General Petraeus had fallen into disgrace, had been removed, everything turned out well.

James Mattis is a general with a rather controversial reputation. In many ways, his achievements are not military merit, but rather a PR action. And with colleagues he has a rather complicated relationship. Mattis frankly does not like the US Armed Forces, the joint command of the forces of special operations and the command of special operations. Moreover, the leadership of the latter (it consists of "Delta" and DEVGRU) is considered "gray cardinals" not only in the Pentagon, but in general in the system of national security.