January 13 2017
56
During World War I, by analogy with 1812, the guerrilla units were formed from volunteers and regular units of the Russian army in the Austro-German front to carry out search and sabotage operations in the tactical rear of the enemy.


In 1915, the headquarters and the headquarters of the fronts and armies received a large number of proposals for the formation of partisan units. Guerrilla units began to form in the military in May 1915, and by the autumn there were several dozen such units of various numbers (on average, 50-150 people armed with small weapons). By the autumn on the North and West fronts existed on 6, on the South-Western Front - 11 guerrilla groups. Practically the actions of the detachments were expressed in the activities of small military groups, and had a local tactical significance. The main forms of these actions are reconnaissance searches, raids, actions of sabotage groups. 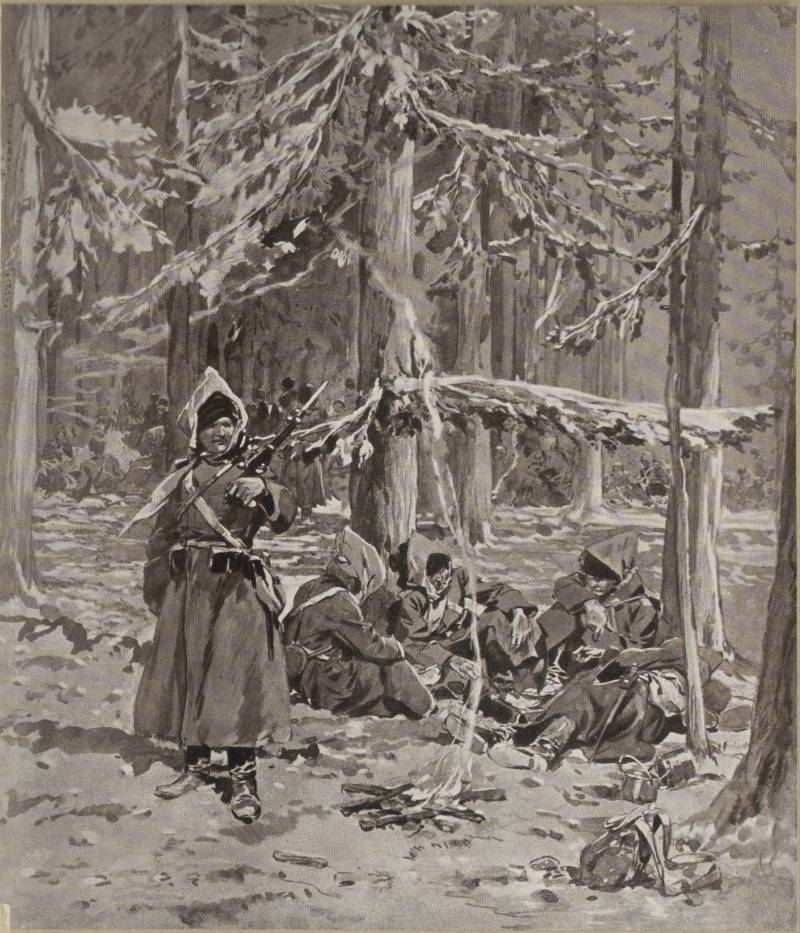 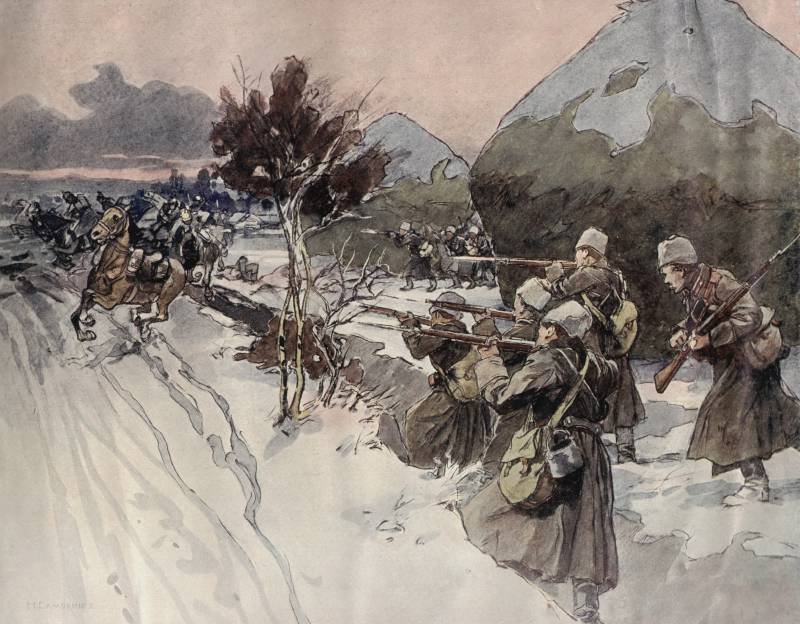 The most effective operation of the Russian partisans was a raid on the town of Nevel and the capture of the chief of the German 82-th reserve division. Partisan Guards, 11 and 7 cavalry, 1, Don, Orenburg and 1 Terek Cossack divisions participated in the raid, as well as the Combined guerrilla unit.

The operation was carried out at night on 15 November 1915, north of the Pripyat River in 25 km south-west of the city of Pinsk.

Raid was preceded by serious preparation. In order to reach the rear of the enemy, the partisans built a pontoon bridge, consisting of two pairs of boats. A thorough reconnaissance was carried out. Although each unit participating in the operation numbered 120 people, but non-combat tasks were allocated up to 50% of the personnel of the units — they did not take part in the raid. In addition to rifles and carbines, the partisans were armed with grenades (besides, the Kuban Cossacks had daggers, and the officers had revolvers).

The village of Nevel in the previous battles was destroyed by artillery fire, so the German reserve infantry regiment stationed in it was located in dugouts, and the Austrian cavalry squadron, carrying the headquarters, was quartered in large bread barns. The headquarters was located in the manor house (farm).

Part of the units involved in the raid, fought in the village, while others provided the operation, destroying the guard posts and German outposts. These detachments in the course of the operation repulsed the offensive of German infantry and a half companies.

By two o'clock thirty minutes of the night, the partisans approached the forest north of Nevel, and from the northern outskirts of the village with a swift blow, removing the German posts, broke into a populated area without a shot. After a short but furious bayonet battle, the village was captured. The guerrillas, diverging through the German dugouts, bayoneted the sleeping Germans or, without entering the dugouts, threw inside hand grenades. Sometimes sleepy Germans jumped out of their dugouts, mostly without weapons, and died.

Thus, it was destroyed to the battalion of the 271 th reserve regiment (including to the 20 officers) and to the 100 horses. Most importantly, they succeeded in capturing the headquarters and the chief of the 82 reserve division there, Major General Siegfried Fabarius. Documents and maps captured by the partisans clarified the grouping of German troops from Pinsk.

The German partisan captivated the partisan detachment of the 11 Cavalry Division under the command of Staff Captain A. Ostrogradsky. For the destruction of the headquarters and the capture of the chief of the division, the staff captain was awarded the Order of St. George of the 4 degree (The Highest Order of 12 in January of 1917).

The attack of the headquarters developed as follows.

The partisans approached the estate, silently removing the guards. The guards who did not expect anything took the partisan in the dark for their own. In the manor house housed the officers of the division headquarters, the canteen, the office and the telegraph operators. All the details of the placement of the headquarters were well known to the partisans. Stealthily, they approached the gallery of the manor house, and without shots burst into the gallery, they took the telegraphers by surprise. Without stopping, the partisans ran into the reception room, through which he walked with a tray of soldiers-messenger. He did not have time to scream as he was stabbed with a bayonet. Running up to the doors of the officers' canteen, the partisans saw the officers sitting after dinner. At this time, someone threw a grenade through the window, and the officers began to shoot back. Some of them tried to jump out the windows or run out of the door, but everywhere they ran across the partisans and were destroyed.

The attack on squadrons, where people had already laid down to rest, was also very sudden. In horror, the Austrian cavalry ran in all directions, often ending their life with Russian bayonets.

The operation lasted less than an hour, and the detachment, together with the captured prisoners, ran towards the front line. On the way, we ran into the rear of the German battery - the artillerymen jumped out of the dugouts and ran in different directions. The guerrillas were in such a hurry that they did not manage to disable all the guns.

Shooting began at the front, and many of the prisoners died. The space between the trenches was covered with German corpses.

After the first 45 minutes of the detachment's actions, the organizer of the raid on Nevel, Lieutenant Colonel Leontyev, was killed - the partisans managed to carry his body with them. For conducting an effective raid, during which the German regiment was defeated and the headquarters of the division destroyed, the lieutenant colonel was awarded the Order of St. George 3 degree (actually "general's" award) posthumously.

The main reasons for the success of the Russian partisans in the case of Nevel: 1) the rare and vigilant guard of the Germans - the German infantry battalion 2 had just come from the reserve; 2) exemplary raid organization. The raid was preceded by a double thorough reconnaissance of the enemy’s positions, a skillful choice of the route followed by the detachments was carried out, barriers and patrols were set up from where reinforcements could approach the Germans. The attack was carried out before dawn and from two sides, the partisans acted only with bayonets and hand grenades. The actions of the Russian units was inherent swiftness.

As a result of the Nevelsk operation, the following were destroyed: 2 implements, telephone exchange, 13 carts with weights, forage warehouse. Initially, a significant number of officers and privates were captured, but during the ensuing battle, and also because of the prisoners' attempt to escape, they were destroyed. Carried away by the partisans with them: 1 general, 3 officer, doctor, 2 non-commissioned officer, 2 privates and 5 camper. The Russian casualties — an officer and a soldier were killed, and three officers and six soldiers were injured.

Major-General Z. Fabarius, becoming a victim of a partisan night attack, 15 November fell into Russian captivity. At the moment of capture the general was in bed. Having pulled him, undressed, out of bed and somehow covering him with a blanket, the partisans dragged him away with them. 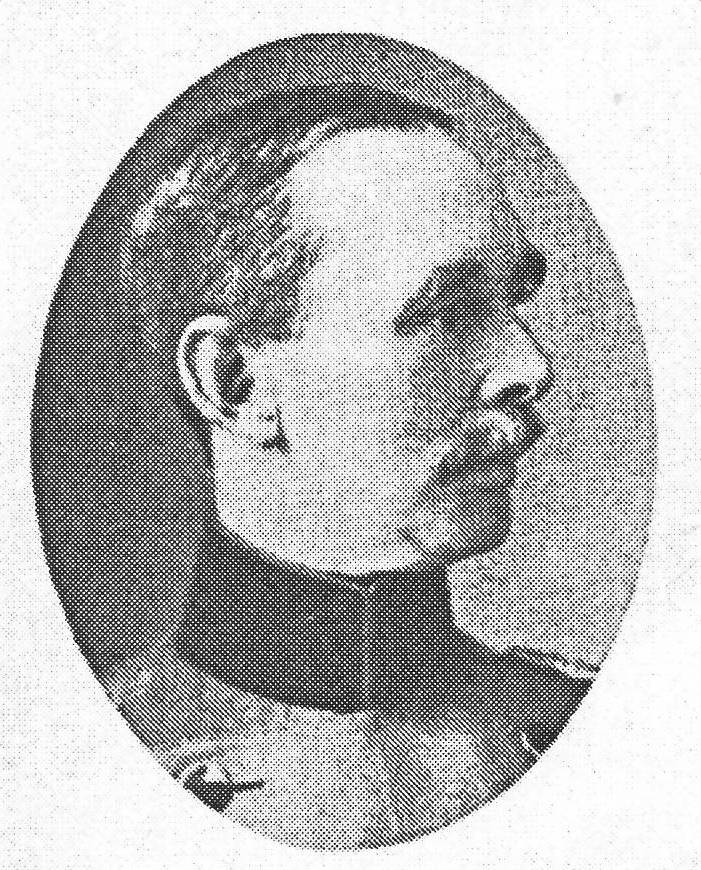 Il 3. The victim of the partisans - General Siegfried Fabarius.

Having rested in the village. Komora, where the general was dressed in a sheepskin coat and a hat (which he did not want to wear), was taken prisoner by a divisional commander to Mutwitz, settled in the officer's wing. The command of the Russian 4-th Horse Corps invited the captive general for lunch - but he did not eat anything, was very worried. After that, Z. Fabarius was taken to the first interrogation conducted in the small town house. The hostess found a warm sweatshirt for the prisoner. After the interrogation, the general was returned to the outhouse - he was nervous, and refused to offer him the food, preferring tea with chocolate. For the night the prisoner-general was placed in a manor's house - the hosts persuaded him to have dinner and drink coffee.

In the morning, a young warrant officer with an escort arrived from the corps headquarters for a captive general (10 hussars of the 17 th Hussars of the Chernigov regiment). Despite the cold, the general did not want to wear a Russian hat, but put on a woolen knitted helmet proposed by the ladies.

Having put the general in a sleigh, the convoy took him to the Gantsevichi railway station - the prisoner was awaited at the headquarters of the 3 Army. But at the station, the ensign met his comrade commander. The commandant invited the officer along with the escort to his apartment, where the friends began to have lunch and drink. At this moment, Z. Fabarius went into the next room to ask the batcher for washing water. And when the orderly came out of the room, the general grabbed the snout of the revolver who was in the belt taken off by the ensign and shot.

Subsequently, a monument was erected in the village of Nevel with the names (more than 30) of all those killed during the raid of German officers. The village of Komora was soon swept off the face of the earth by German artillery fire, but the partisans had already been transferred to another front. For many of the raid participants, these events made a bad impression.

The idea of ​​forming partisan detachments in the years of World War did not bring the desired results - it was necessary to solve organizational issues in relation to partisan actions in peacetime, and not when the war began. When maneuvering operations it was still possible to correct the blunders of peacetime, but this became impossible when the enemy took up fortified positions from sea to sea, wrapped himself in several rows of barbed wire — then the time was irretrievably lost. It was obvious that most of the attempts of the partisans to penetrate the enemy's rear would end in failure and would be reduced only to the removal of several posts and the enemy, as well as to ordinary disturbing actions.

But on the eve of the coming wars, the experience of a “small war” was acquired. And in stories it will remain the fact that the only captive acting general of the German army on the Russian front of the First World War is the victim of the 15-year partisans.