Before the first confrontation with the French army, Kamensky's army was located in the following positions: the Bennigsen corps at Pultusk, the Buxgevden corps at Ostrolenka, the Essen corps at Brest, and the Prussian troops of Lestocq at Strasbourg. The Russian avant-gardes stood: Count Ostermann at Charnov, Barclay de Tolly at Sokhchin and Kolosomb, and Baggovut at Zegrzhe.

December 7 1806 of the French Emperor Napoleon Bonaparte arrived in Warsaw, December 9 - the French troops began a general movement. Napoleon decided to surround and destroy the Russian army in the area of ​​Golymina (north-west of Pultusk), where, according to erroneous data from French intelligence, it was located. Based on this idea, the left wing of the French army, the Bernadot and Ney corps, the Bessieres consolidated cavalry corps, moved from Thorn to Strasbourg to cut off the Prussian troops from the Russians, and then attack the right flank and the rear of the Russian army. The center, the infantry corps of Soult and Augereau, moved from Plock to Sokhchin and Kolozomba. The right wing with Napoleon himself, the Lanna Corps, Murat's Guard and Cavalry, moved from Warsaw to Charnow.

Barclay de Tolly reported on the movement of the enemy from Plock. The Russian commander-in-chief Kamensky decided to knock out the corps of Augereau and Soult beyond the Vistula. He ordered the Bennigsen corps to go from Pultusk to Sokhochin and Kolozombu, cross Wkru and attack the enemy. Buksgevden's corps was divided into two parts: the 5-I and 7-I divisions of Tuchkov and Dokhturov went from Ostrolenka to Vkre and constituted the right wing of Bennigsen; The 8 and 14 divisions of the Essen 3 and Anrep divisions were sent by the left bank of the Narev to Popov in order to guard the left wing of the army and the territory between the Bug and the Narev. The corps of Essen 1-th ordered to come out of Brest and to establish contact with the divisions of Essen 3-th and Anrep. The movement of our troops began on December 10 (22). 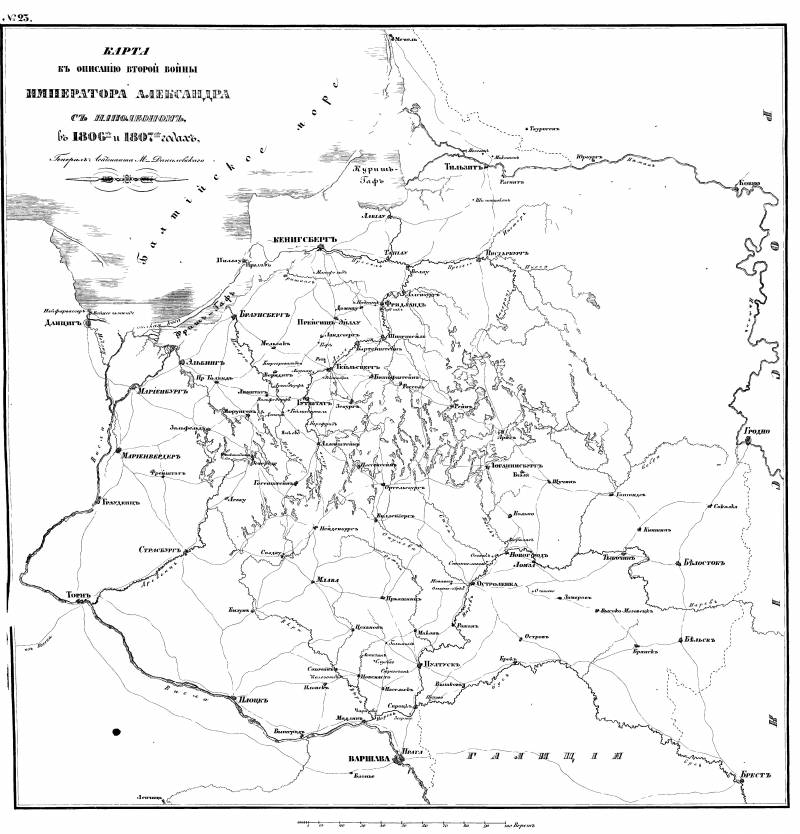 Source of maps: A. I. Mikhailovsky-Danilevsky. Description of the second war of Emperor Alexander with Napoleon, in 1806 and 1807

The first fights. The Case of Sokhochin

In the evening of December 10, the Cossack patrols of Barclay's detachment moved from the right bank of Vkra to the left, and the forward detachments of the French corps Soult and Augereau came out to the river. Our troops destroyed the crossings, they built a redoubt at Kolozomb. Here stood the 3 th jäger regiment and the 2 squadron of the Izyumsky hussar regiment of Loshkarev and Gluskov. Commanded by Barclay de Tolly himself. At Sokhochina, the 1 th jäger regiment of Davydovsky and the 3 squadron of hussars under the command of Major Potapov were located. The Tengin Musketeer Regiment of Yershov was located in the forest between Kolozomb and Sokhchin.

On the morning of December 11, the French infantry began the rafting. Russian rangers opened fire and repulsed the first attack. Replenishing advanced units, the French again tried to force the river. The second attack was also beaten off. Ouzero organized the third attack and at the same time moved part of the troops to the right flank in order to go behind the left wing of the Russian detachment. The French forced the river in a place where there was no our troops, began to build a bridge. Here on the other side of the French cavalry swam. A squadron of our hussars under the command of lieutenant Gluskova crushed the first rows of the enemy. However, it was not possible to stop the enemy. More and more French infantry and cavalry moved to our shore.

Barclay ordered the rangers to retreat, the same order was received by Davydovsky from Sokhchin. Our troops began to retreat to Novemyasto. The French attacked the redoubt and seized 6 guns, their first trophies in this campaign. The French tried to encircle the Tengin regiment, which at first fired, preventing the French from mooring to our shore, and then moved towards Sokhochin to join up with Davydovskiy. However, the Tengians with their guns at the ready, with music and drumming, overthrew the enemy and broke through to their own.

At this time, the huntsman Davydovskogo also fought off the attack of the French troops. They fought off all the attempts of the French to cross the river. French troops suffered heavy losses. The fighters of the 1 th eger regiment were the best in the Russian army in shooting. Before the war, the regiment stood in the Karelian forests and Davydovsky actively practiced shooting skills, and the huntsmen achieved such excellence in shooting that almost every shot reached the goal. Davydovsky himself was slightly wounded in this battle. Having received Barclay’s order to withdraw, the jägers of Davydovskiy united with the Tenginsky regiment and retreated to Novemyast, where all the forces of Barclay de Tolly united.

Thus, the first serious battle of the Russians and the French in this campaign took place. As Barclay de Tolly noted, "several battalions for a long time held up the rapid attack of entire enemy corps." 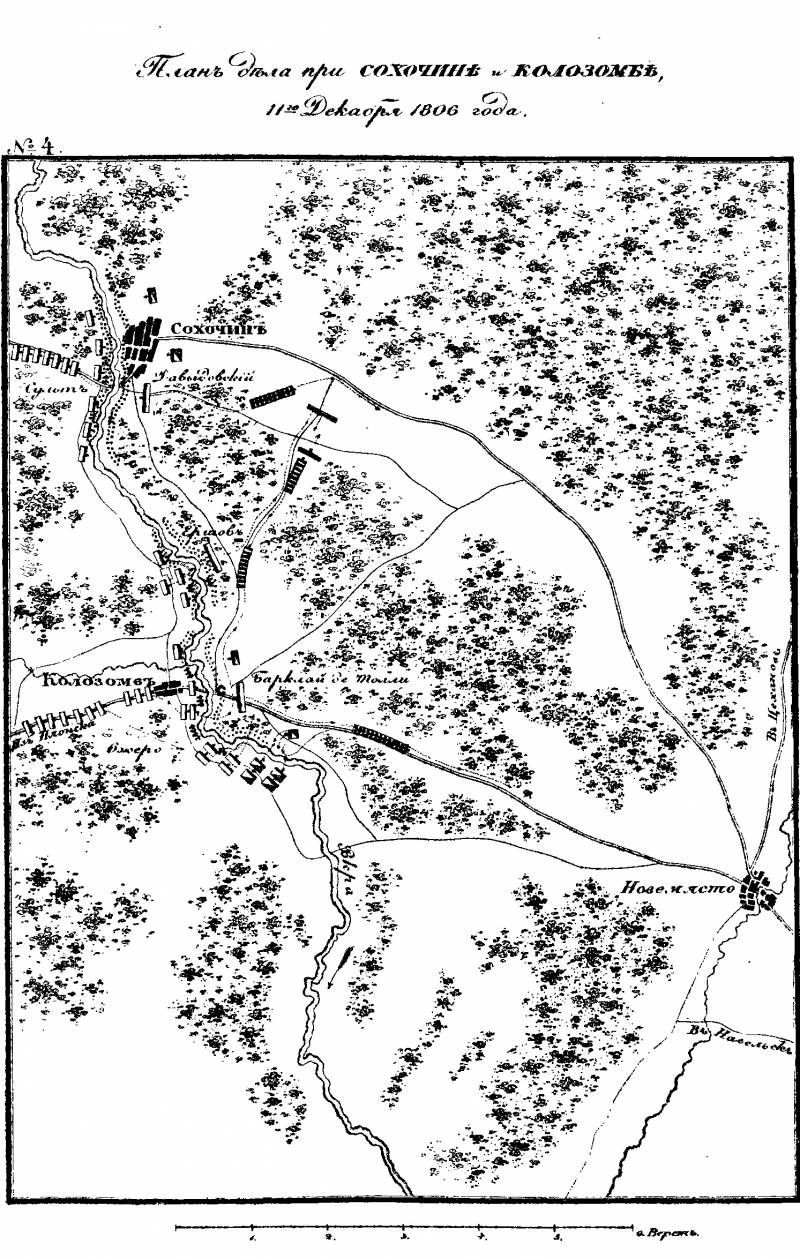 The Davou Corps (Infantry Divisions of Freean, Moran, Guden) took Modlin, put one crossing on Wkre and another on the Narev near Okunin. Not being able to push the enemy from the right bank of the Narew on his own, Osterman put the battery at the Pomikhovsky bridge (near the village of Pomikhovo) and took a strong position ahead of Charnov, located on the banks of the Narew river. Its tributary Vkra covered the right flank and center of the Russians from the enemy.

11 (23) December 1806. Emperor Napoleon arrived at Davout with a Lanna corps, a guard and cavalry. After examining the location of the Russian troops from the bell tower in the village of Gore, Napoleon said that he had awarded Davout’s corps for the victory at Auerstedt as the first right of the entire French army to solemnly enter Berlin and now provides a brilliant reward - the first battle with the Russians in his eyes. Napoleon decided to conduct a night attack against the enemy. The plan was simple: under the cover of darkness, force the Vkru River and crush the small Russian detachment. Napoleon Bonaparte ordered the Moran division to attack the left wing of the Russian detachment, and the Gudin division to strike the right flank. Friant's division, the Lannes corps, the guards and the cavalry remained in reserve. As a result, Napoleon was going to start the crossing at the same time in 2 places: from the island where Vrak flows into Narev (Moran's division), and from the Pomikhov region (Guden's division). The offensive was to begin on a conventional signal: an hour after the troops saw the fire in Pomikhovo. 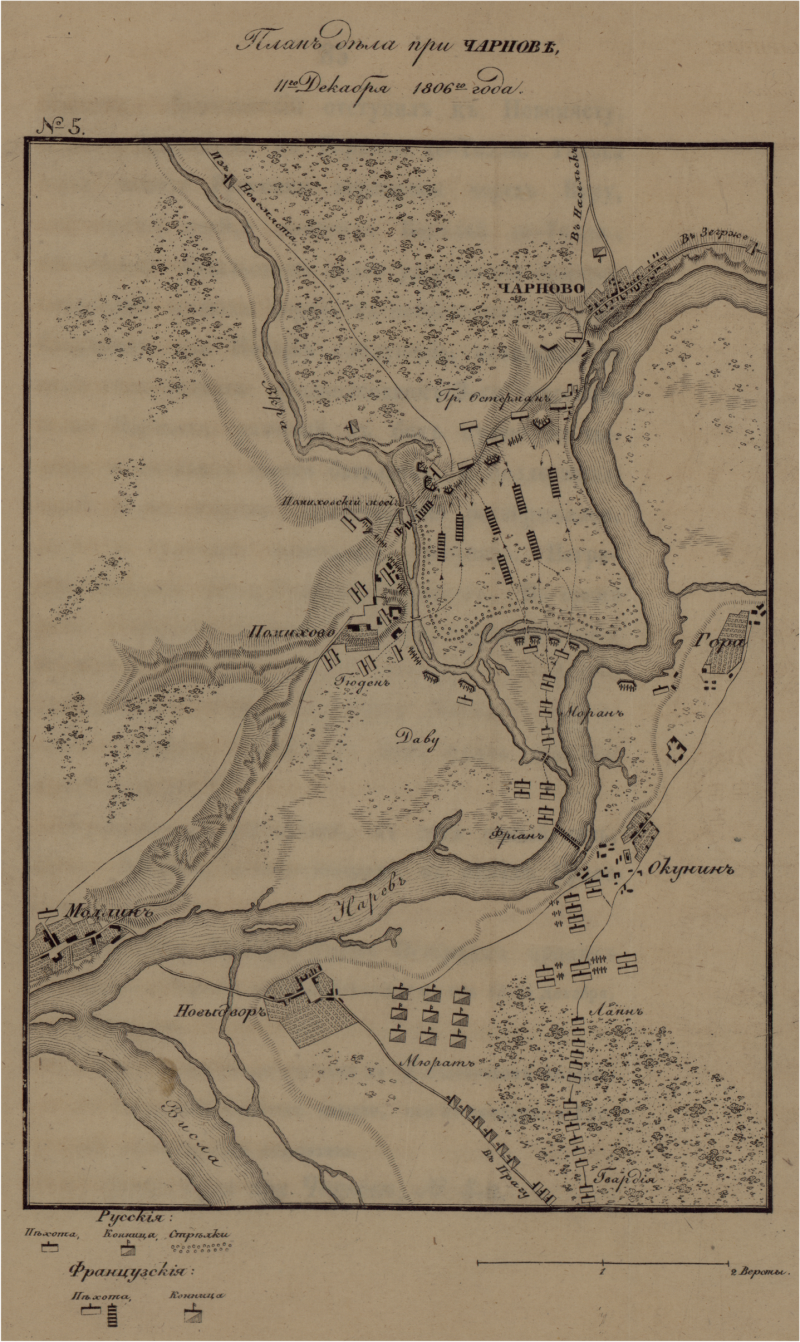 In 16 hours 12 (24) December, when the short winter day came to an end, the French set fire to Pomikhovo. The Russians noticed the suspicious activity of the enemy and prepared for battle. In the morning our troops were waiting for the arrival of Commander-in-Chief Field Marshal Kamensky, so they were in full dress, and met the enemy in it. At 17 hours, French artillery opened fire, and then, as soon as it got dark, the enemy moved forward from the island and the right bank of the river. Vkra on bridges, boats and ferries. The chambers under the command of Major General Lambert held off the enemy for some time, but then retreated by order of Osterman-Tolstoy. The French were attacked in columns by our batteries in front of the main position at Charnovo and at Pomikhovo. Russian artillerymen met the enemy with a canister, then the huntsman with a bayonet counterattack overturned the enemy and pursued them to the river bank. Thus, the Russian soldiers repelled the first attack of the enemy. The fight subsided for a while.

Half an hour later, having received reinforcements, the French again went on the offensive. It all happened again: the French approached the batteries, but could not stand the fire and turned back, they were pursued by the Musketeers of the Rostov regiment. Preparing to repel the enemy's third attack, and in order to increase the mobility of the troops, Osterman ordered to put on the 4 Pomikhovsky battery horse guns instead of the heavy guns that were there, which were to be transported to the main position.

Soon the French went on the third attack, but the enemy was again thrown back from the main position. But at the Pomikhovskoy ferry, the French broke through, forcing the 4 Russian gun crews to retreat and their cover. Osterman threw a battalion of the St. Petersburg Grenadier Regiment under the command of Major Moshinsky to the threatened area. Russian grenadiers regained their position.

In the meantime, a rifle-artillery firing was going on all lines. The darkness of the December night hid the number of enemies, but the stubbornness of the attacks of the French troops, who fiercely went forward under the exclamations: “Long live the Emperor!”, And the testimony of prisoners made it clear to Osterman that he was dealing with the main forces of the enemy. He decided to withdraw the troops to Charnov. First, under the cover of a grenadier, he took the battery artillery back, putting light foot and horse artillery in positions.

Our troops did not have time to start a withdrawal as the French launched a new attack. But this attack was repelled. After that, the battle subsided. The Russian detachment calmly withdrew for Charnovo. A battalion of rangers and 6 equestrian guns were left in front of the village. After an hour and a half, the French again went on the offensive. Osterman ordered the rangers to withdraw to the main forces. The French moved behind them and violently attacked our position. Russian troops met the enemy with rifle and cannon fire, then went to bayonets. Count Osterman himself and his generals led the soldiers to attack. Russian hussars also rushed to the enemy. After a desperate battle, the Russians held onto the position, and the French retreated to Charnov. Napoleon ordered to stop the fight, only the French artillery continued shelling of Russian positions.

Morning was coming. Considering the fact that, in the light of day, the French will see the small number of the Russian detachment and simply embrace and crush it, Osterman ordered to retreat in 4 in the morning. The French did not pursue our troops. Osterman-Tolstoy detachment retreated to Naselsk. At the same time, Osterman ordered the Baggovut detachment to hurry from Zegrzhe to Pultusk, and by all means keep the bridge over the Narev there. This foreman Osterman was very correct.

In the battle of Charnovo, the losses on both sides were approximately equal and amounted to approximately 1000 people. The French were impressed by the resilience of the Russian troops and noted: "Count Osterman maneuvered like a real soldier, and his army fought with great courage and firmness." No wonder in the future, Count Osterman-Tolstoy will be one of the heroes of the Patriotic War.

The steady defense of Osterman’s detachment at Charnov was of strategic importance. Having detained the French army for half a day at the crossing, Osterman prevented the enemy from intercepting the main forces of Bennigsen from Pultusk and cut off his crossings through Narew.

At 10 in the morning of 12 (24) in December, the Osterman detachment arrived at Naselsk. Russian troops settled on the heights of the city. At noon Field Marshal Kamensky arrived here and ordered Osterman that if the enemy were to mount again, go to Stregochin, it was on this day the Bennigsen corps assembly point. Indeed, the French soon approached Naselsk and began to walk around it. Artillery fire began. Finding that the main enemy forces were approaching Nasselsk, Osterman carried out the command order and withdrew the troops in perfect order. A few hours later they arrived safely in Stregochin. 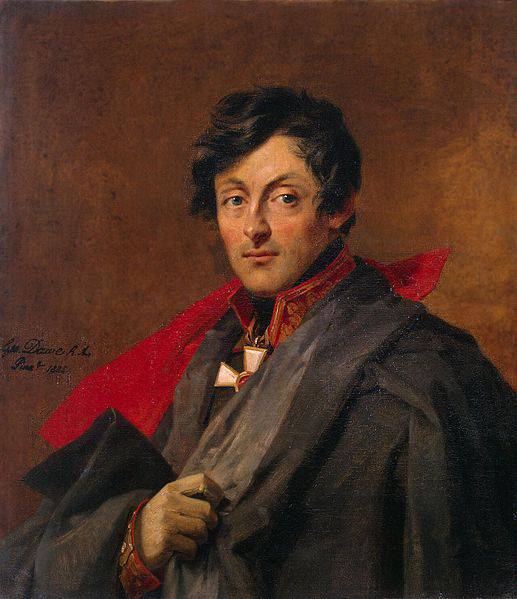 Russian-Prussian-French War 1806 – 1807.
As a military psychosis led Prussia to a military-political catastrophe
How Napoleon destroyed the Prussian army
Campaign in Poland. How Napoleon tried to crush the Russian army