Campaign in Poland. How Napoleon tried to crush the Russian army

December 13 2016
13
210 years ago, in December 1806, the Russian imperial army entered the battle against the French army under Napoleon. Napoleon launched a campaign in Poland and East Prussia with the aim of imposing a decisive battle on the Russians, winning it and dictating the terms of the peace of Russia, which led to the defeat of the Fourth Anti-French Coalition. In December, 1806, fierce battles took place between the Russian and French armies near Charnov, Golymin and Pultusk. They did not reveal a winner.

The war of the fourth coalition (the Russian-Prussian-French war), which included England, Prussia, Russia, Saxony and Sweden, against Napoleonic France, was actually a continuation of the Russian-Austro-French war of the 1805 year. The leading European powers tried to crush first revolutionary and then imperial France, which claimed dominance in Europe. In fact, it was another attempt to build a "European Union", but under the authority of France. France subjugated Italy, in 1805, pacified Austria. Now it was the turn of Prussia, which led to the complete domination of the French in a fragmented and multi-state Germany, among which the Prussian kingdom was the strongest.

In fact, it was an internal European war of leadership in Western Europe and the Western project as a whole. The main instigators of the war, the aggressors were London, Paris, Vienna and Berlin. Russia in this quarrel climb was not worth it. France had no common borders with us, Russia and France had no fundamental contradictions. However, all opponents of Republican France, and then Napoleon’s empire, needed Russian “cannon fodder”. A special role in drawing Russia into a series of wars with France was played by Vienna and London.

At the same time, the Austrians and the British tried to ensure that in the course of this long war Russia did not get strategic positions in the Mediterranean basin, in Central Europe. The sovereign Pavel, angry with the intrigues of the "partners" that almost led to the death of A. Suvorov’s army, broke with the "allies" and headed for an alliance with France. France and Russia could well curb the appetites of England. However, the British organized a palace coup and "Russian Knight" Pavel Petrovich was killed. His successor, Alexander, retained all his life fear and pursued a pro-British policy. Russia has steeped in European affairs and has destroyed enormous resources, the lives of tens of thousands of soldiers on the aimless war for Russia with Napoleon’s empire. All the benefits of Russia's participation in the war with France were obtained by Vienna, Berlin, and especially London.

The “allies” regularly substituted the Russian army with their short-sightedness and greed, which led to strategic mistakes and defeats. Thus, during the 1805 war, Austria did not wait for the Russian army under the command of M. Kutuzov to launch an offensive herself. This led to a decisive defeat of the Austrian army near Ulm. At the cost of tremendous efforts, Kutuzov and his generals were able to save the army from encirclement and surrender or complete rout. However, the mistakes of the supreme Austrian and Russian command led the Russian-Austrian troops to a new decisive defeat at Austerlitz. Austria was withdrawn from the war.

Russia continued the struggle and concluded an alliance with Prussia. The Prussian military-political elite, blinded by pride, decided that the "invincible" Prussian army itself would crush the "Corsican upstart". As a result of the general plan of the war, the Allies did not have and acted inconsistently, which allowed Napoleon to break them one by one. The 2 (14) of October in Jena-Auerstedt battle the French army utterly defeated the Prussian-Saxon troops. It was a real disaster, the will of the Prussian military-political leadership was broken, the remaining Prussian troops and garrisons were demoralized. The strongest Prussian fortresses that could have been besieged for months, one after another, capitulated. After that, the French troops occupied most of Prussia and 12 (24) in October occupied Berlin, where on November 9 (21) Napoleon signed a decree on the continental blockade. However, formally Prussia has not yet capitulated. Prussian king Frederick William III with his wife and retinue fled to East Prussia, hoping for help from Russia. 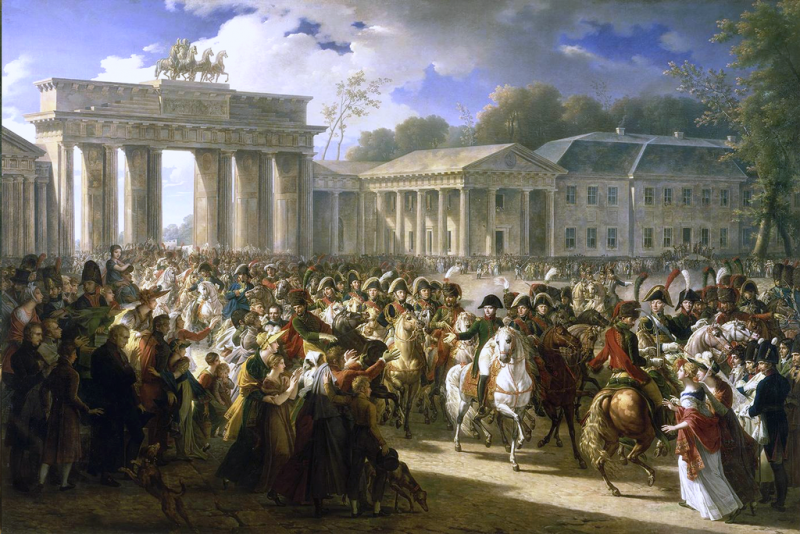 The continuation of the war

Russia is once again alone in the face of the victorious French army. The strategic situation was very difficult - at the same time Russia was at war with the Ottoman Empire (war of 1806-1812) and Persia (war of 1804-1813). Capitulate Russia, since I started the war, now I could not. Not only Germany and Prussia were at stake, but also Russia's position as a great power. Paris could completely oust Petersburg from European politics. Napoleon was going to use the Russian empire in the struggle with England, which threatened the economic interests of the empire and could recreate the Polish state as a buffer between Europe and Russia under its control, which already affected the national interests of Russia.

Thus, the advance of Napoleon to the east of Berlin threatened the Russian borders. A delegation of Poles came to the French emperor with a request to restore the independence of Poland. This has directly affected the interests of Russia. Now it was necessary to show the determination of Russia to defend its interests. Give Napoleon a fight to get a decent world.

On November 3, 1806 of the year, help was already sent to Leonty Leontyevich Bennigsen’s 60-thousand corps, and then another corps of 40 thousand soldiers led by General Fyodor Fedorovich Buksgevden. After the Russian troops crossed the border, they decided to strengthen the army, and the corps of General Essen-first arrived from the reserve to the theater of forthcoming actions. With his arrival, the Russian Foreign Army increased to 160 thousand people with 624 guns.

According to the union treaty, Russian troops were to operate in Germany and supplied at the expense of Prussia. The complete defeat of the Prussian army radically changed the situation: now the struggle was to be fought on the territory of East Prussia and the Polish regions of Prussia. Under these conditions, the Russian army was tasked with preventing the invasion of the French into the Russian Empire. The Russian army was concentrated in the area of ​​Pultusk, Ostroleka, Brest-Litovsk, having advanced detachments on the Vistula.

It is worth noting that Russian troops in the Polish regions were confronted with sabotage of the local population. The Polish elite waited for the arrival of Napoleon's troops, and the orders of the Russian command did not comply or delayed the time. The local Prussian administration was demoralized and could not help the Russians. As a result, there was a problem of supplying troops with food. At first, while there was money, our generals and regimental commanders bought bread and other products. When the funds ran out, the soldiers began to get food supplies by force, which angered the population.

16 (28) November, French troops occupied Warsaw. Our troops left the city without a fight. Bennigsen was accused of leaving the strong line of the Vistula River without a fight. The general said that the French army had a large numerical advantage and could easily bypass it on the flanks. In addition, on the side of the French were the inhabitants of Warsaw, who could raise a rebellion.

The French army numbered 150 thousand people and 600 guns. Thorn housed the corps of Ney, Bernadot and part of the Bessiere guard; in Plock, the cases of Soult and Augereau; in Warsaw, the Lanna corps, Murat's guard and cavalry; Modlin has a Davou body. The French did not pursue Bennigsen's troops in the direction of Ostrolenka, completing the crossing. Finding that the French were not moving forward, the main forces of Bennigsen returned to Pultusk, the advance guard of Barclay de Tolly, Ostermann-Tolstoy and Baggowut were put in front. Lestocq was ordered to take Thorn. On the march there the Prussians learned that there were three French corps there and returned to Strasbourg.

December 4 in Ostrolenka arrived Count Buksgevden Corps, which by order of Tsar Alexander was to make a reserve Bennigsen. The corps had 4 divisions: 5-division of Tuchkov 1, 7-division of Dokhturov, 8 of Essen 3 and 14-division of Anrep. At the same time, the body of Essen 1 began to approach Brest. The corps consisted of two divisions: 9 of Prince Volkonsky and 10 of Miller-Zakomelsky Division.

Bennigsen and Buksgevden did not depend on each other, there was a feud between the corps commanders, which reduced the overall combat capability of the army. Senior Buksgevden, who considered himself bypassed, complained that foreigner Bennigsen was more trusted than he was. That Bennigsen was given more troops, and they were better in quality. Thus, the corps of Bennigsen did not participate in the battle of Austerlitz, was in good condition, the troops were eager to fight the French. But the corps of Buksgevden consisted mostly of regiments that had been defeated near Austerlitz, they had not fully recovered from the defeat, the troops lacked rifles and cartridges, the artillery park needed horses.

Another problem was the choice of the commander-in-chief of the Russian army. Alexander could not find a leader who would inspire the army to fight and become a worthy opponent of Napoleon. Calling his senior generals, the king said: "That's all of them, and in no one do I see the talents of the commander in chief." Kutuzov was not among them. The great Russian commander was in disgrace after Austerlitz, and at that time he was appointed Kiev military governor. As a result, senior field marshal Mikhail Fedotovich Kamensky, who was known for his impudent temper and victories over the Turks during the time of Catherine the Great, was appointed commander-in-chief of the Russian army.

It was a mistake. Kamensky in the best years was notable for his courage, energy, determination and self-control, was considered a good tactician, but his best years were far behind. Already on the way to Pultusk he felt bad and wrote to the emperor: “I lost almost the last sight, I cannot find a single city on the map ... The pain in the eyes and in the head; I am not capable of riding a long time ... I truly feel incapable of commanding such a vast army. " Kamensky asked to send a deputy to surrender his army. Arriving in the army, Kamensky again wrote to the emperor: "I am old for the army ... I dare to ask myself for a change."

Napoleon planned to crush the Russian army before it was combined with the only surviving 14-thousand from the Prussian army. the corps of General Lestocq, who covered East Prussia. Active actions began on December 7. The left wing of the French army was tasked to march to Strasbourg in order to cut Lestok from the Russian army and then act against the Russian right flank and rear. The center was to divert Russian troops eastward, towards the Narev River. The right wing was to march from Warsaw to Chernova, bypass the left flank of the Russians and complete their encirclement.

Russian-Prussian-French War 1806 – 1807.
As a military psychosis led Prussia to a military-political catastrophe
How Napoleon destroyed the Prussian army