December 7 2016
8
Arms supply contracts are an iceberg. On the surface only the top, but the most interesting in the part that is not visible. Something similar takes place in the case of a contract for the supply of arms between Qatar and Italy.


It is known that 16 June 2016 was signed on the protocol of intent, which was signed by the Minister of Defense of Qatar Khalid bin Muhammad al-Attiyah and his Italian colleague Robert Pinotti. The supply of seven warships was agreed. Namely: four corvettes based on the Baynunah project, two ocean patrols and one universal dock ship. Qatari called this program Protector.

The total value of the transaction has reached almost five billion euros. This is quite a large amount for contracts of this kind, it is for comparison the equivalent of a third of French arms exports for 2015 a year.

The following is known about the deal today. The Italians must deliver four corvettes to the petrostate, armed with eight MBDA Exocet MM40 Block 3 anti-ship missiles, a ship-mounted air defense system with 16 Aster 30 Block 1 (with anti-ballistic missile capabilities), RAM air defense system, torpedoes, 76-mm anti-aircraft guns, 20 mm artillery mounts, helicopter. Radio-electronic systems (radar, gas, electronic warfare) will be supplied by Selex, a member of weapons holding Leonardo. Patrol ships with a length of 60 meters will be equipped with air defense missiles with Mica missiles with vertical launch. Designed according to the Falaj-2 type (two such ships were delivered by Italians from the UAE in 2010). The UDC project was developed on the basis of Kalaat Beni Abbes, built by order of the Algerian Navy and equipped with Aster air defense systems. Deliveries should begin in 2022, that is, by the time the World Cup is held in Doha. It is interesting to note that the contracts with the Italians provide for a 15-year period of ship maintenance, including crew training.

With these purchases, Qatar creates a navy capable of operating in the ocean. Doha now has a very modest fleet of patrol ships and boats. 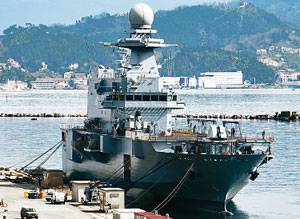 Behind this pretty familiar to the arms market picture, which does not stand out among other major contracts, hides a hidden part. That is what makes it possible to think that the largest expenses just do not show up to the observers.

The cost of weapons roughly corresponds to the contracts that MBDA signed earlier in Asia and the Middle East. In addition, the participation of France in the concern MBDA, which will supply missiles Mica VL and Exocet, makes "smearing" the budget a difficult task for the Italians. That is, the opportunity to inflate costs should be sought directly in the shipbuilding part.

If you analyze the previous deals with warships, you can find the following. The cost of UDC Kalaat Beni Abbes for Algeria was 420 million euros, the contract itself was signed in 2011 year. Two Falaj-2 patrol for the UAE cost 200 million euros, while the total amount included the cost of transferring a building license, which is not the case in Qatari.

As for the four corvettes, which are a modernized version of Abu-Dhabi, supplied by the United Arab Emirates, with increased length, the cost of one Emirate model without armament was 92 million euros, and a total of about 110 million euros without ammunition. It is believed that the ships ordered are based on the Fincantieri project Multipurpose Corvette with a standard displacement of 2400 tons and a length of 104 meters.

If we analyze the average cost of heavy corvettes that are present on the market (excluding Algeria, whose MEKO A200AN are also “oversold”), we can see that the price of one is 180 – 250 million euros maximum (the latter case is the case for corvettes of the 10514 project of the company Damen, which are built in Indonesia, have a length comparable to the Qatari order and are armed with Exocet and Mica VL). Assuming that the price of the enlarged Abu-Dhabi is 250 million euros (that is, twice as expensive as those set in the UAE), we get the total value of the entire contract billion euro. That is, in the end, the Protector program should cost 1,62 billion euros (420 million plus 200 million plus 1 billion), a maximum of two billion taking into account the additional costs for a modified version of the corvette. This is very different from the voiced figures - 3,8 billion euros. The difference in 1,8 billion euros can not be attributed solely to the cost of maintenance and repair over the course of 15 years.

It turns out: the package of contracts Protector at its cost represents a certain anomaly. The huge amount that cannot be identified and explained on the basis of the data available in the public domain forces us to make assumptions about kickbacks (at the political level in Italy) or bribes (in Qatar).

The commercial links between Doha and Rome are extensive. The emirate has already invested 150 billion euros in the Apennines through Qia. The Italian company Salini-Impregilo is building a subway in Doha on the eve of the 2022 World Cup. In general, it can be stated that bilateral economic ties are consistently strengthened. At the beginning of 2016, the number of joint ventures that operated in the emirate exceeded 200 entities.

According to available information, the financial scheme of the arms contract was developed by the Qatari company Yousef Group, which conducts business in various fields and industries. It is headed by Mohammed Khalifa bin Youssef Al Suwaydi, who previously served in the General Staff, and then was the second person at the court of the Crown Prince (Sheikh Khalifa). After that, he began to make a diplomatic career, was in responsible positions in the Ministry of Foreign Affairs of the country, after which he went into the financial sector, where he also held solid positions.

Other mechanisms have been created for kickbacks. Among them, the company Gulf Helicopter, which is engaged in the repair of helicopters, and by a strange coincidence, belongs to the family of the Chief of Staff of the Navy Al Mohannadi. It is very closely connected with AugustaWestland, and also operates several helicopters of its production (AW189 and AW139). From 2008, Gulf Helicopter depends on Gulf International Services, which in turn is owned by Qatar Petroleum.

Another potential channel for transferring funds may be the Italian project of the underwater archaeological museum in Qatar, a very interesting emir. The project is being developed by Bluimage Productions and PRAS Technica Edilizia. And the construction will be carried out with the help of the Italian companies Leonardo and Fincantieri, that is, those involved in the Protector program.