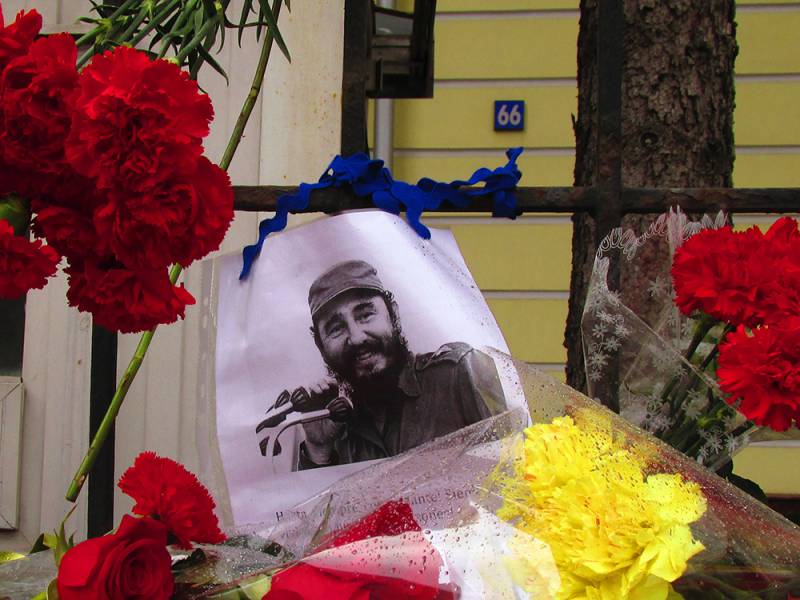 ... And they buried him in Santiago de Cuba - the city where most of his anxious childhood and rebellious youth passed. In the cemetery of St. Iphigenia, near the tomb of the eminent poet and fighter Jose Marti. The funeral itself was modest and was held in a narrow circle of friends and relatives. But they were preceded by nine days of farewell. A grand farewell ... The streets of Havana and other Cuban cities, including Santiago de Cuba, were flooded with the people's sea and people's sorrow ...

During these nine days, the urn with the ashes of Fidel Castro was transported along the route of the Freedom Caravan. Only in the opposite direction - from the capital to Santiago de Cuba, where the revolution started at the time, putting an end to the pro-American dictatorship of Fulgencio Batista. Fidel rested not only next to his idol José Martí, but also alongside his comrades who fell during the assault on the barracks of Moncada in 1953 year.

A massive farewell to Fidel was in Moscow. Throughout the week, thousands of people came to the mansion on Bolshaya Ordynka, 66, where the Embassy of Cuba is located, to leave entries in the Book of Memory. Sellers of flower shops located near the Dobryninskaya metro station said that they did not have time to deliver flowers to them, especially the red carnations. The embassy fence simply drowned in flowers. 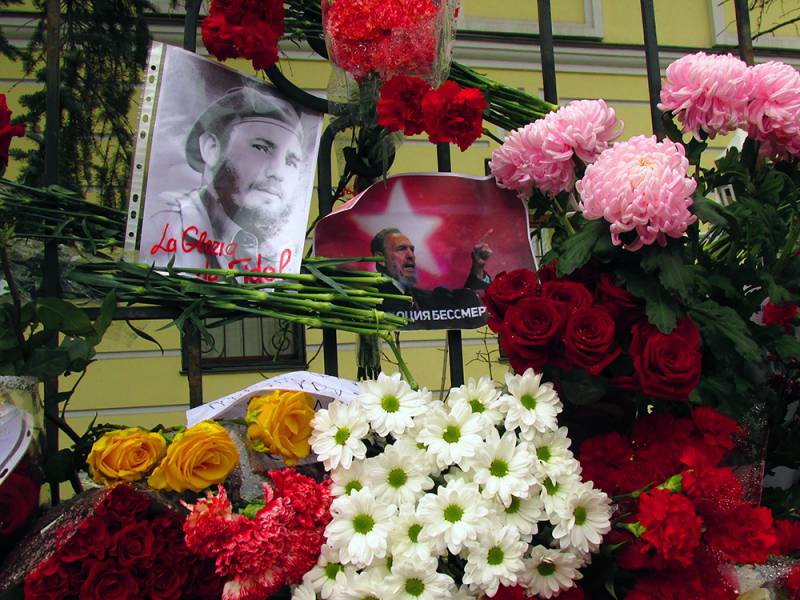 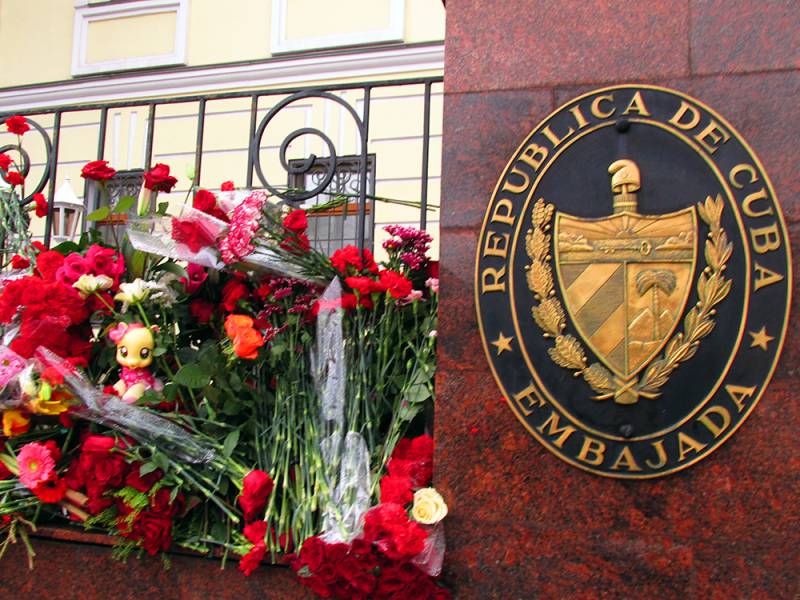 Such a reaction of Russians to the death of a politician, with whom memories of the Soviet Union are closely connected, is also caused by the fact that the mass media, at last, have ceased to defame the leaders who challenged the United States. Previously, the reaction to the death of the martyred politicians killed with the participation of Washington was much more modest - affected by the monstrous demonization. At the time, demonized and Fidel. Many times they tried to destroy him, but every time there were "accidents" that saved him at the last moment. Truly amazing fate.

Former Argentine President Cristina Kirchner, on her blog, commented on the newly reposed: “Fidel and Cuba definitely entered the great history... Castro, along with the Cuban people - an example of dignity».

Fidel Castro's death coincided with a monstrous attack against Latin America.. Dilma Ruseff and Christina Kirchner, who carried out progressive reforms in favor of the poorest segments of the population, not at all accidentally removed from power. In Argentina and Brazil, there was a right-handed revenge, supported by the US authorities. With the help of the impeachment declared by Dilme Rousseff, one of the BRICS supports, Brazil, was actually knocked out. From the new authorities it is difficult to expect the same close cooperation with Russia.

Continuing attacks on Venezuela. Unfortunately, many media outlets present the situation as if the president of this country, Nicolas Maduro, "brought the country to poverty." And this is after the deliberate reduction in the price of oil, from which Russia suffered the most. After all the “velvet revolutions” and even after the “Arab spring”, when we witnessed how, under verbal tinsel about “bad leaders”, entire states were actually destroyed.

Until recently it seemed that the government of Venezuela is about to fall. Fortunately, Nicholas Maduro - one of Russia's most faithful allies - has so far managed to remove the degree of tension. But, of course, pro-American "opposition" will continue to do harm.

Large dirty trick against Venezuela was made a few days ago. This country's membership in the organization MERCOSUR (South American Common Market) was suspended. This decision was taken by four states: Brazil, Argentina, Uruguay and Paraguay. That's the bitter fruit of a pro-American revenge! Clearly, under Christine Kirchner and Dilma Rousseff, such a solution would be impossible. The President of Venezuela called this decision illegal and stated that he would seek restoration to MERCOSUR.

Fidel Castro sought to unite Latin America in the face of a common enemy and did a lot for it. And, his ashes did not have time to cool down - as the next attack on the rights of Latin American states is already underway.

In general, if an anti-Venezuelan coup d'etat takes place, even under plausible excuses, it will be a serious blow to Russia's interests in the region. Venezuela under Chavez, and then under Maduro, is the very country that ALWAYS supports Moscow in the international arena. It is one of the few states that openly dared to recognize the independence of Abkhazia and South Ossetia. This country actively votes against anti-Russian statements and resolutions in all international organizations in which it is represented. Finally, Venezuela is one of the largest buyers of Russian weapons (even if it is now in an economic crisis, this does not mean that it will not get out of it, which means we can count on it in this regard). So, if Venezuela needs assistance at this stage, it should be provided in order not to allow the USA to liquidate another ally.

Incidentally, the fact that Kirchner and Rusef were removed from power did not bring prosperity to either Argentina or Brazil. So, in Argentina, after the arrival of the new president, Mauricio Macri, no “economic miracle” happened. The authorities report a decrease in unemployment - but in fact, under the new president, over 200 thousands of people have been dismissed. This caused a protest. Now the country's leadership is ready to take the "Law on the extraordinary social situation."

As for Brazil, it did not get better there either. On the initiative of the new president, Michel Temer, all social programs are cut back. In late November, we have been protests that ended in clashes with police.

Let's go back to Cuba. Although Raul Castro has so far firmly held power, in the US certain circles already have illusions, as if now you can take Cuba almost with your bare hands. The death of Fidel caused stormy joy in Miami, where Cuban immigrants settled under the American caring wing, among which are outright criminals.

Donald Trump’s tough statement, who called the late Cuban leader a “tyrant”, suggests that US anti-Cuban policies will continue. And, although Trump is expected to soften American policy in the Middle East, as well as on the front of the confrontation between Russia and Ukraine, Cuba will not be any better off.

However, all the anti-Cuban forces had a great moral boost as early as 2006, when Fidel Castro became seriously ill and then handed the reins to his brother Raul. But there was a "bummer": Cuba resisted.

Fidel Castro himself, when asked whether he was afraid of death, replied: “Those who have done nothing are afraid of death. I did everything I wanted and dreamed about».

And Cuba, and Latin America are waiting for hard times, but also rejoice in those who hope to benefit from Castro's death - sooner. The banner of his struggle is now in safe hands. And the scale of parting with a revolutionary and a leader shows that the people can not only support, but truly love their leader, despite the blockade and the economic difficulties associated with it. So not everything depends on American money. 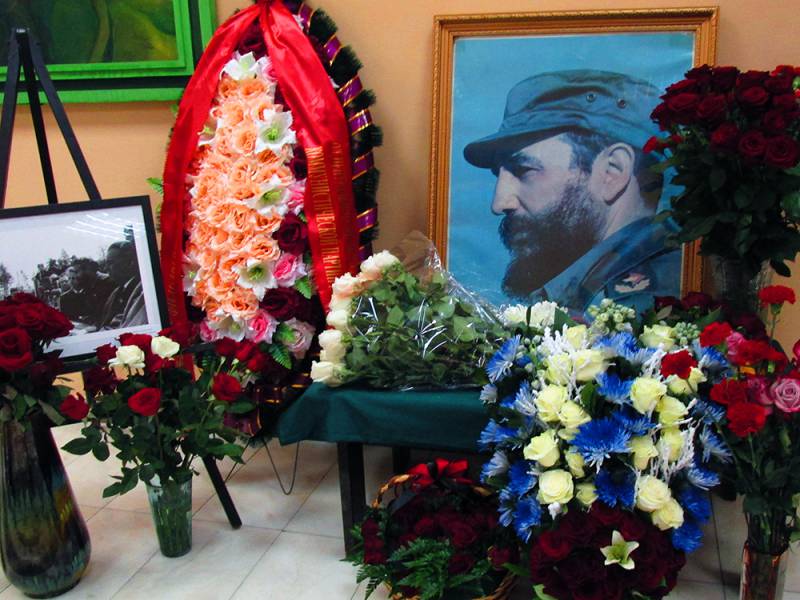 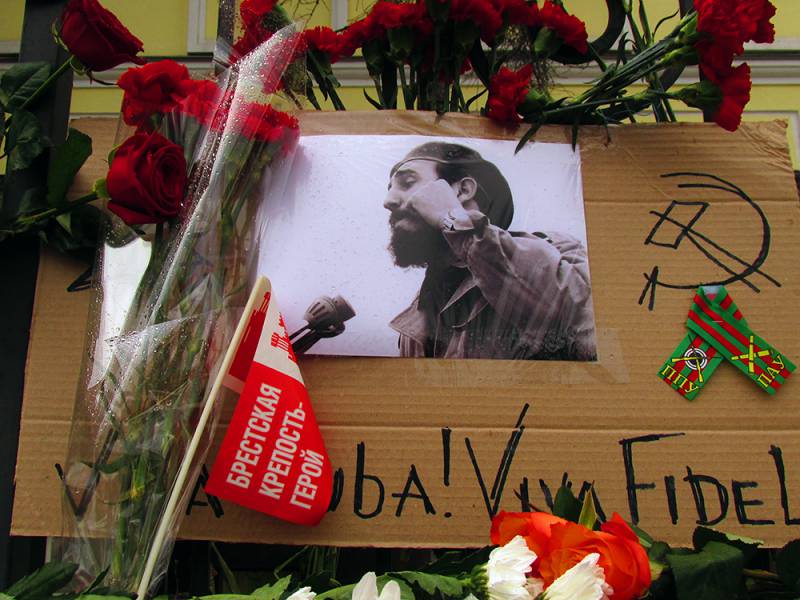