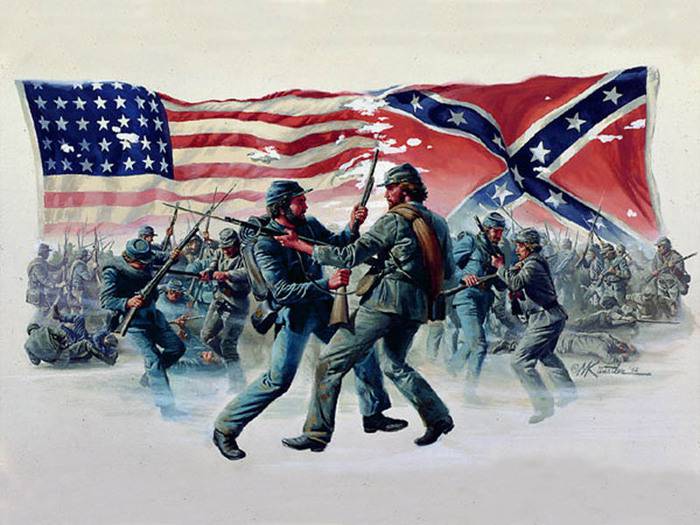 You can have a different attitude to the current elections in the United States. You can sit on the couch with malice and a pack of popcorn and have fun, you can run around with shouts of “everything is lost” and “the world is heading towards a world war.” I suggest soberly, with real facts, to reflect on the questions:

With all the emotionality, satiety of information and elective technologies, tons of compromising information and a complete lack of moral principles, the outcome of the elections is still not decided by these factors, but by boring numbers of meetings with voters, audience coverage, elective events, etc. Typically, the media peck on the shocking of what is happening and do not cover the technical side of the candidates' election campaigns at all.

And in vain. After all, boring numbers and facts can not give a television, but a real picture of what is happening, and the results of the election marathon can be extremely shocking. American editions The gateway pundit и Truth feed give figures of the real activity of candidates for the presidency of the United States for the month of August, and these figures for many of you may be a surprise.

According to the publication, Donald Trump continues to significantly outperform Hillary Clinton in the performance of official duties in campaign events in the month of August. On 17 August Trump held 22 campaign events, Clinton held 11. The difference is exactly 2 times. Trump has much more support for his events than Clinton. The attendance of Trump rallies on August 17 is more than 110 000 people. Clinton has just over 10 000. From the 11 events, the Clinton 5 was held in the gymnasiums of high schools. But Clinton could not fill them with their supporters. Visually, it looks like this:

As a result, in August, Trump had more than a tenfold superiority among supporters at his events.

Clinton is no better off with the number of working days. During the 17 days of August, Clinton took 7 weekends, not counting Sundays, and Trump only 2, and he worked on Sundays, as well as 7 days, he participated in more than one event. Clinton gives his election campaign about 50% of his time, and she can be said to be very displeased by ordinary Americans. Trump is fully consistent with expectations. He is vigorous, industrious and energetic, and no flies sit on him.

In addition, if Clinton ran 5 from 11 campaigns in school gymnasiums that were half empty, then Trump conducted at least 7 events in crowded sports arenas (Columbus, Harrisburg, Ashburn, Wilmington, Abingdon, West Bend and Akron). And if the Trump team works out on public events for whole days, then the Clinton team is limited to certain statements that are published in the media for any reason. I do not think that these statements, such as an essay for Teen Vogue, had at least some more or less mass audience.

All candidate achievements in their electoral events are tabulated. 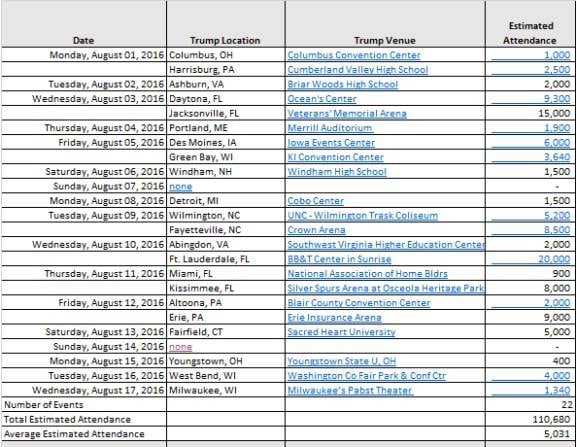 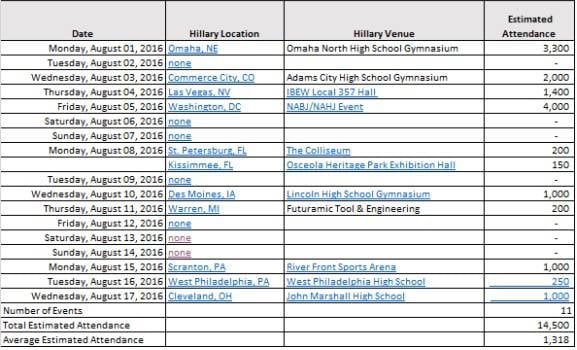 Note: One Clinton performance at the NABJ / NAHJ Event with 4000 listeners was not a pre-election event, but the numbers present are included in the table.

In September, when Clinton began to show publicly incomprehensible diseases, and so a small number of election campaigns she has decreased even more due to canceled. And all this despite the fact that the trump election fund is significantly less.

These figures reflect the real state of affairs in the pre-election race and the real, rather than drawn by the media, the attitude of Americans towards candidates. Any non-engaged analyst will have a definite conclusion - in the US presidential elections trump wins by a large margin. I think that this reality is realized not only by the candidates themselves, but also by the forces behind them. These forces have opposing and even antagonistic views on America’s future, and this reflects the unprecedented intensity of the electoral struggle.

In any case, the outcome of the elections will be decided during the election day, and all plans prepared in advance for this period (A, B, C, and later on the list) will take effect at that time. Let us consider several scenarios taking into account the fact that the candidates and their headquarters immediately before the elections will already know with a very high probability who will win.

Clinton Wins. Trump probably has a whole complex of facts on this option proving obvious violations, ballot stuffing, substitutions, etc. He, of course, promptly publicize them, followed by aggressive campaigns in the media and social networks, and this could blow up the situation in the United States. Trump will go to the end, and in the USA something like Maidan may be formed with complete paralysis of public authorities. It is necessary to understand that in the structures of power and control in the USA there is a certain balance of forces and interests, and the predominance of supporters of Clinton and Trump in various power structures can lead to their direct collision. A country that possesses one of the strongest armed forces with nuclear weapons, can plunge into chaos. This option is highly undesirable, both for the United States and for the rest of the world.

Trump Wins. This option is probably the most developed in the headquarters of the Democrats. To prevent it, the Democrats can include already tested methods of mass fraud and fraud.

In the past US presidential election, the press published many cases of such technologies. A couple of examples:

Let's face it - Obama won the election. Just as Putin and Ahmadinejad did. The only difference is that, unlike Iranians and Russians, Americans will not take to the streets to protest against the violation of their civil rights by the corrupt machine of the Democratic Party.

First, he received more than 99% of the votes in those constituencies from which the Republican inspectors were illegally removed. He then received 100% votes in 21 constituency in Cleveland. But this is not all, he received another gift of fate!

This year, Mr. Obama won in Wood County, Ohio. That's right, Mr. Obama got the 108 percent of the votes of Wood County registered voters. This is not a typo.

Morgan Holliger, secretary of the Democratic College, joined in the jubilation: "We won Wood County, we won Ohio."

Mr. Obama really won Wood District, along with all his 108% voters.

One half of the Democrats' covert game is tricks with voter turnout. The other half is falsification of voting results. Voter ID could have an impact on this game, but it would be like a return to segregation or something like that. ”

“The election results in many polling stations cannot yet be accurately calculated, and this can create many problems throughout the state.

When election observer Gertrude Walker was asked about the 141 turnout, she said: “It may have been something like that in Palm Beach County, but we have never seen it here.”

As we can see, the technology of mass stuffing and fraud by democrats has been honed in practice. Another question is that in the previous elections the intensity of the struggle was not the example below, and the elites behind both candidates agreed peacefully on everything. But it is impossible now. Now the elite will go to the end, to the bitter end. And this is fraught with chaos in the country. 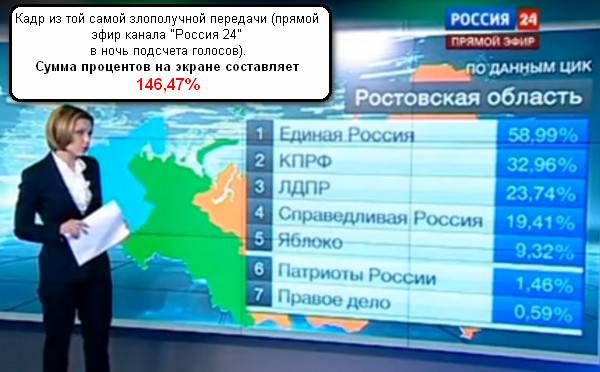 But, first of all, Churov has nothing to do with this case. This is the responsibility of the TV channel that gave such a picture. How did this happen? There are many opinions on this subject. I personally tend to the fact that, as in the case of the patriarch’s watch, a trained person was introduced into the technical service, who later quickly quit and moved to the USA. But now, at the existing election campaign, at the level of the primaries, the Democrats had a similar situation. 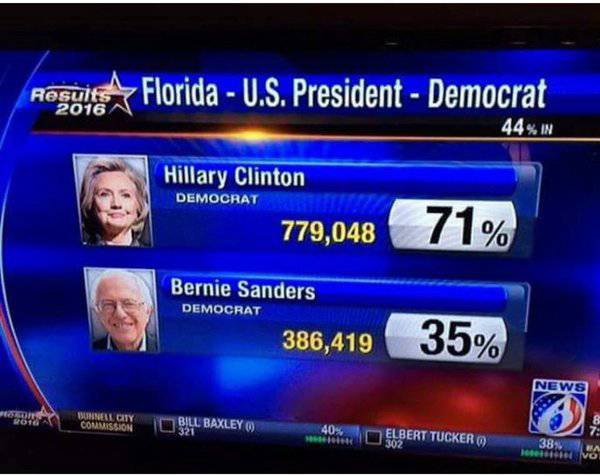 Whether it was a technical failure, or a pre-planned action, I do not know. In any case, there was no point in applying a blank for the primaries with an obvious result. But who knows the reasons of the democrats?
In addition, the Democrats have long been ready to use the administrative resource, stuffing and falsification. As reported edition Christian times newspaper, in the business center of Columbus, a simple electrician found black ballot boxes with a few thousand false ballots in favor of Clinton in an empty building. 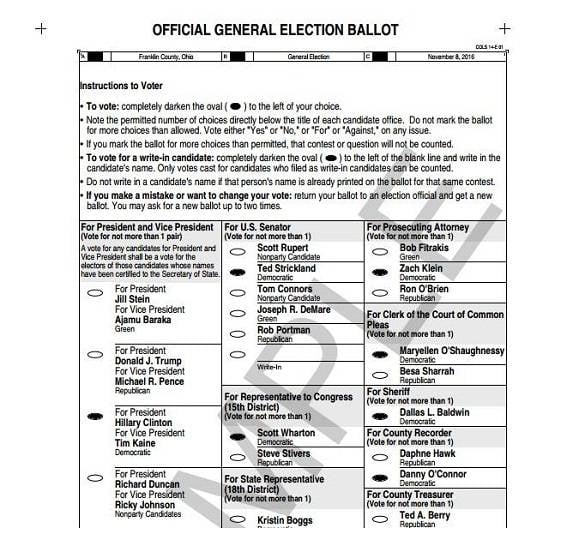 Most likely, such ballot boxes with fake ballots are located throughout America and are waiting for the start of the preliminary voting. And no other electrician or cleaner will accidentally find such bins. Unless, of course, Trump takes care of this, and the ballot boxes for Clinton will be found somewhere by chance. In any case, no matter who prepared it, making such cases public plays into Trump’s hands and sets the stage for a serious post-election confrontation.

Cancellation of elections, or their results. There are two possibilities for democrats to hold power for some indefinite period of time:

1. Cancel the election itself. This is possible in the event of a declaration of an emergency, martial law, or the start of war. Since there are no super destructive natural disasters on the horizon, and it is very difficult to predict them, and it is even more difficult to organize them, there remains a war. Everything has already been prepared for her, both in Syria and in Ukraine. Public opinion has been prepared, one provocation at the right time and place, and a war of varying intensity can begin. Which, firstly, will give a reason for the cancellation of the elections, secondly, will unite the nation around the authorities, that is, the democrats. And this will give them a huge trump card for future elections in the foreseeable future. I think that the Trump team will resist such a scenario as much as possible.

2. Cancel the election results. This is possible if the victory of Trump will be clear and with a large margin, as well as if the victory will get Clinton with a small margin. In this case, the candidates will bring to the public in advance prepared accusations and violations, and if there is no opposition in the country, the authorities may remain with the Democrats, or go to a certain Committee in an unpredictable form, which would violate the Constitution.

There is another option, if the elites nevertheless agree, and someone gets power without incident. This option is unlikely, and I would consider it with a great deal of skepticism. However, for the rest of the world, this option is most preferable. No one in the world wants the largest nuclear country to be in chaos. Chaos is unpredictable, and the world benefits from an evolutionary path of development.

Well, the most unlikely option. If a honestly one of the parties wins, the other, guided by the US Constitution and principles of democracy, congratulates them on their victory and, without fear of revenge or other consequences, will build with it freedom, equality, fraternity on the principles of the beloved democracy of all. And live a long, long time, until death do them part.

What we wish them and without gloating and hind thoughts. After all, who, if not we, the Russians, know what a civil war is and how much grief and misfortune it bears ordinary people. But it seems to me that these feelings are not mutual with us. Therefore, be with them what will be, and we need to be ready for any option.

Ctrl Enter
Noticed oshЫbku Highlight text and press. Ctrl + Enter
We are
What you didn't want to know about EnglandVladimir Churov: On Observance of Citizens' Rights in the USA
Military Reviewin Yandex News
Military Reviewin Google News
83 comments
Information
Dear reader, to leave comments on the publication, you must to register.