August 26 2016
76
The election campaign for the election of deputies of the State Duma of Russia has moved into an active phase. Candidates were able to campaign in the media, bringing to the reader (viewer, listener, user) their own vision of the political, economic and social changes that are needed (or not needed) by the country.


First you need to remind (well, suddenly one of our readers forgot some) that the elections to the lower chamber of the Russian parliament will take place on September 18 on 2016, and political parties and forces are registered to participate in the election race on 14. The ballot paper that every citizen of the Russian Federation at the age of 18 will receive on the list structure and the distribution of parties in it will look like this: 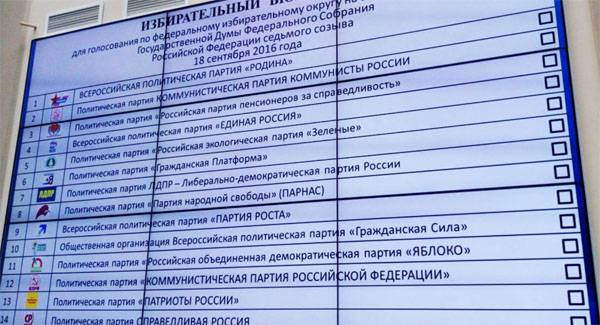 More 6 political parties, among which, for example, the defense ("Great Patriotic Party") Nikolai Starikov, clearly able to compete with the leading political forces of the country, the Central Election Commission to participate in the elections as candidates are not allowed. Apparently, real competition today does not fit into the electoral system - well, almost like in the USA ...

The parties admitted to the elections are now trying with all their might to draw attention to themselves and their representatives from the Russian public. Everyone gets it differently. In some cases, it is completely civilized, if not to say “on duty”. But in others - the creative often rolls over.

In no way does the “Military Review” set itself the task of agitating for one or another political party, but at the same time it calls for using its civil right to vote and to come on September 18 to the polling stations. And as an informational reflection of how Russian citizens want political parties to “lure” and “seduce” to recruit the necessary interest in the elections, it is worthwhile to present the candidates' propaganda materials distributed throughout Russia. Once again, it must be emphasized that the speech on the part of “VO” is not about campaigning for one candidate or another, but about the motley information picture of the election days that the “party members” themselves draw.

The long-liver of the Russian political scene (or arena), Vladimir Zhirinovsky, pointing out with a menacing look to potential voters that he "does not count votes, but hears them." If Vladimir Volfovich himself is the creative author of this banner, then his health should be worried - if a person hears some voices, then this is already a medical case. Although the Liberal Democratic Party, as usual, in its repertoire - attention to itself is sought in any political weather and in any political scenario. 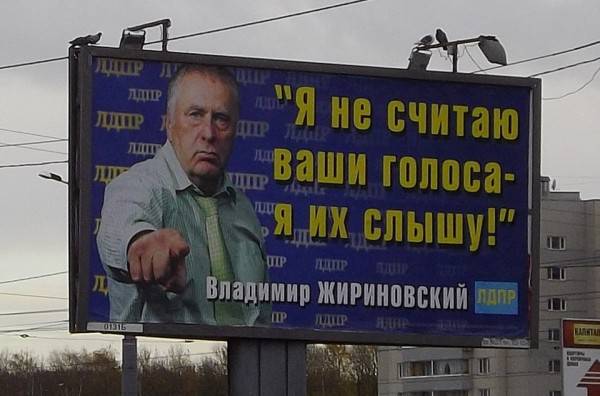 And this is a competitor for "audibility" - EP candidate Anatoly Litovchenko. Hears the voices of literally everyone. 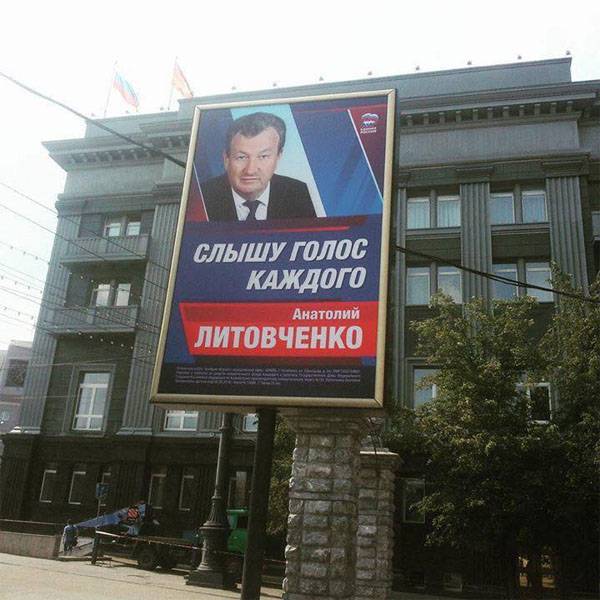 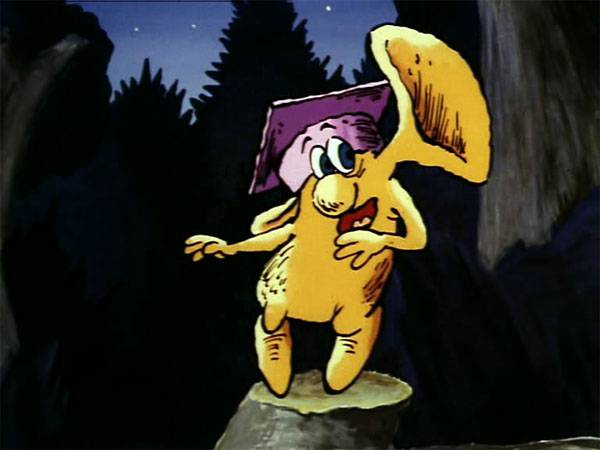 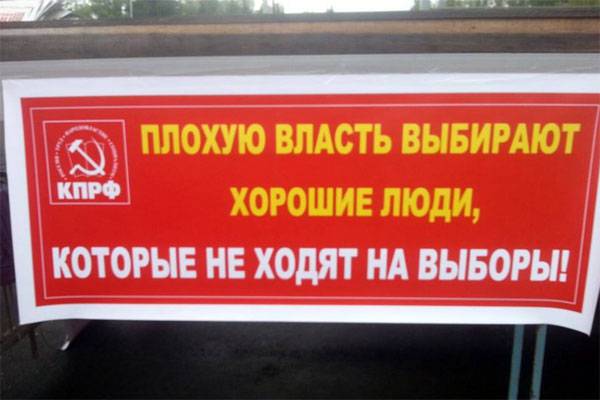 The “Motherland” party, or rather its individual representative Valery Ivanov, was noted with an outstanding election slogan. It is not known what particular prospects a single-mandate candidate promises, but, what is called, reinforced concrete: “Enough for snot in a fist!” 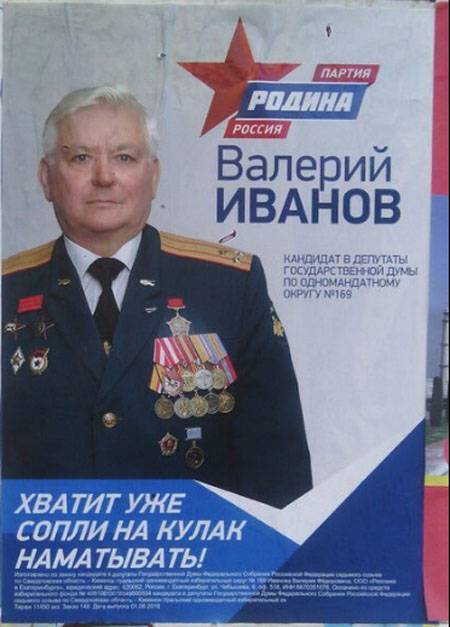 On a poster nearby, the notorious Professor Zubov, who is in the first Parnassian trio, is trying to “reclaim Russia”. 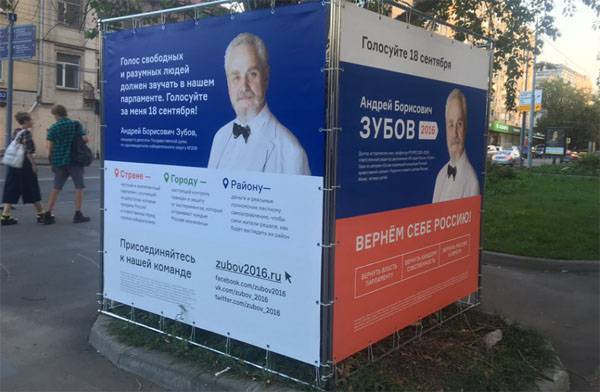 Against the background that Mr. Zubov is in no way haunted by the “crimes of the Soviet regime” and the “annexation of the Crimea”, it is not quite clear who exactly these people who are going to return Russia after the 90's to ... dictation created the Russian fundamental law and defiantly spit on the results of the referendum on the preservation of the USSR? One question: Teeth is among them, or the professor is now needed as a new (although not so new) tool for returning Russia to the colonial mainstream of Western “democracy”.

And this is an agitation post from the current party of the parliamentary majority: “We'll repair the roads!” 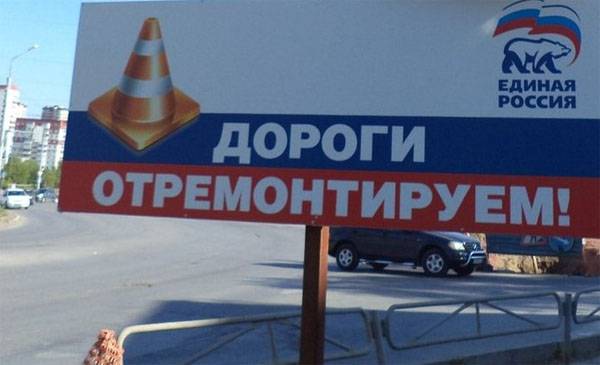 The question is, who's stopping to do this right now - before the elections? ..

“Fair Russia” is an extravaganza in the Perm region: “We'll tell Putin the truth.” 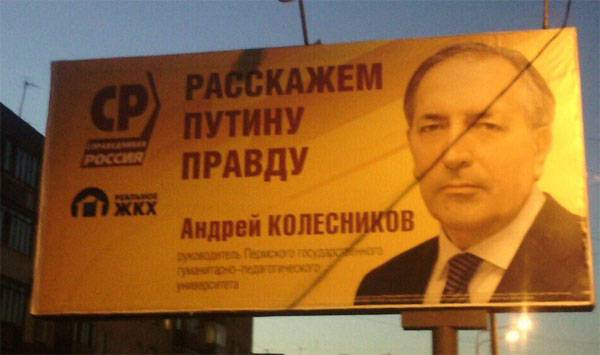 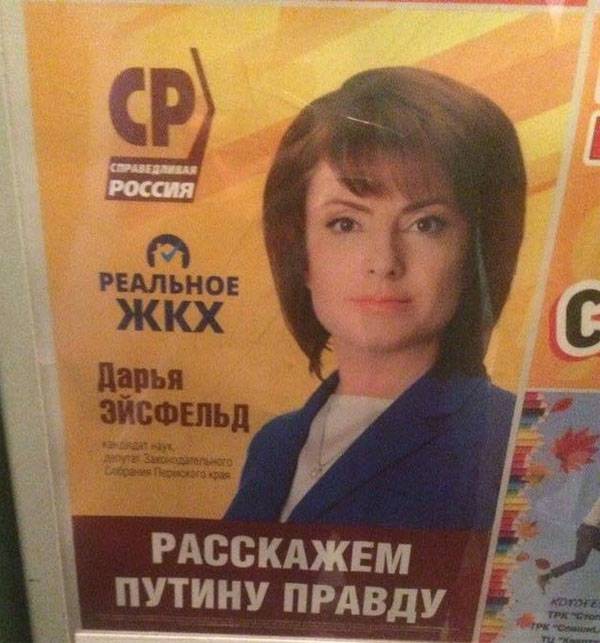 This is either something from the “King is good, boyars are bad” series, or the candidate Kolesnikov and not only Kolesnikov makes unequivocal hints that so far the Russians have told the president something, it’s just a lie ... Or without nomination to tell the truth to Putin weakly? ..

And this must be the real messiah for all the debtors, and also from “Fair Russia”. 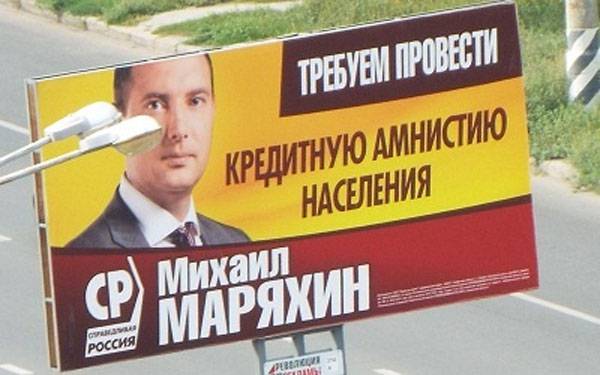 An interesting approach: take loans - get an amnesty. Or does the candidate Maryahin have a personal printing press to simultaneously meet the needs of the population and the interests of banks?

And if some of our readers have a difficult time, do not despair. After all, there is a candidate Amelkin, whom no one knows, but who is next to us. Apparently, he does not hear the voices yet, but somewhere near (look around) he is holding on ... Well, he promised the same ... 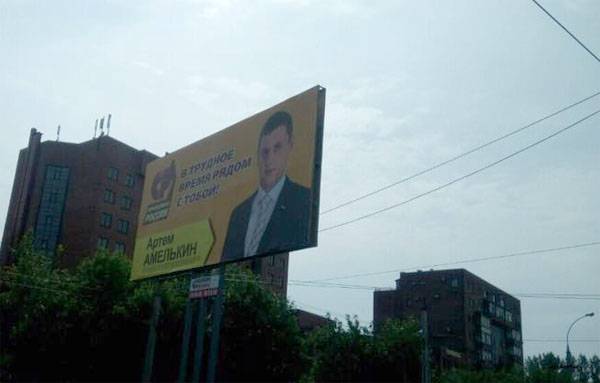 And the candidate Kazantsev from the Civil Platform proposes the slogan “Less banks - more factories!” It’s hard to argue with that, but on what if this slogan is implemented, the Civil Platform itself, whose current leader so actively campaigned at that time Mikhail Prokhorov. 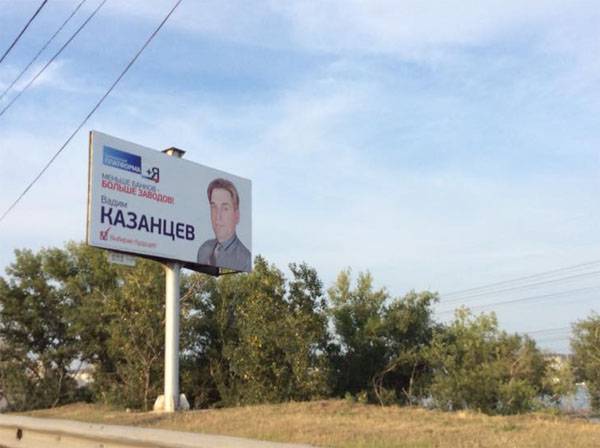 In Saratov, meanwhile, they decided to measure political success by the number of demolished stalls. Manually? 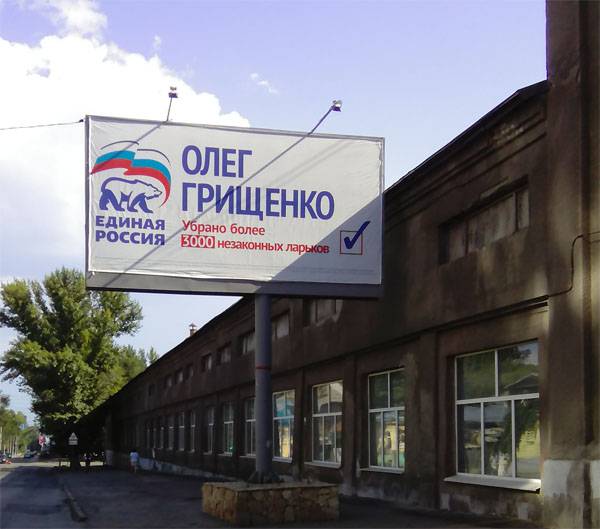 In general, the creative placer from the PR agencies of the parties and individual candidates can still be presented for a very, very long time, because this world is endless before September 18. Well, after 18, the streets of our cities are orphaned without photographic images of those who are so eager to make our life with you unlike any better than the current ...

Well, and as the famous 90's advertising read: "Get up and go to the polls." Only now vote is not the heart, kidney or diaphragm, but still the "brains".

Ctrl Enter
Noticed a mistake Highlight text and press. Ctrl + Enter
We are
Results of the week. “When society has no color differentiation of pants, then there is no goal!” And when there is no goal, there is no future! ”New hopes of May. Homs released, and the election campaign started
76 comments
Information
Dear reader, to leave comments on the publication, you must to register.