August 20 2016
8
Women's participation in the position of the wounded is unique. Everyone who has ever come into contact with medicine knows that it is women’s hands that cause less suffering and cure faster. Male orderlies is not given.


During the Crimean War, it was already impossible to do without them: the cruelty of the war and the suffering of the wounded became transcendental, for one soldier who died in battle had 10, who died from wounds and diseases. In many ways, it was precisely the women-sisters of mercy who for the first time appeared in that war could go out and save thousands of wounded.

The 150 sisters of mercy of the Krestovodvizhenskaya community (in most of the noble families) created by Grand Duchess Elena Pavlovna arrived in Sevastopol and for the first time took care of the wounded and sick directly in combat conditions: on the battlefield and in infirmary. 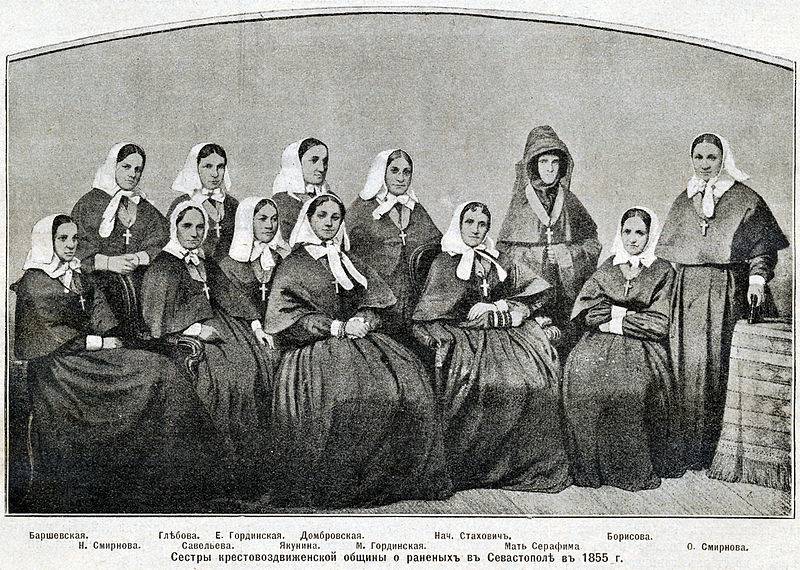 The sisters of mercy directly submitted to the professor of the Medical-Surgical Academy of St. Petersburg N.I. To Pirogov, who enthusiastically wrote about them: “I am proud to have led their blessed activity.”

In 1867, under the auspices of Empress Maria Alexandrovna, the wife of Emperor Alexander II, the Society for the Care of Wounded and Sick Warriors was established, uniting the sisters. Subsequently, it became known until now by the Russian Red Cross Society. Under the leadership and patronage of the Russian Empresses, the ROKK remained until 1917.

With the onset of the Great War, the women of the country, regardless of the class distinctions and position in society, selflessly courted the wounded at the front and rear: the daughter of the minister of the sea worked at the Nikolayevsky Sea Hospital in Petrograd, and the daughter of the chairman of the Council of Ministers went to the front as a sister of mercy, as Alexandra Lvovna Tolstaya. From the first months of the war, the writer Kuprin with his wife, the sister of mercy, was at the front.

Rimma Ivanova, a teacher from Stavropol, voluntarily went to the defense of the Fatherland and became a sister of mercy. 9 September 1915 of the year near the village of Mokraya Dubrova (now the Pinsk district of the Brest region of the Republic of Belarus) during the battle Rimma Ivanova under fire provided assistance to the wounded. When both officers of the company were killed during the battle, she raised the company to the attack and rushed at the enemy trenches. The position was taken, but Ivanova herself was fatally wounded by a bursting bullet in the thigh. By decree of Nicholas II, as an exception, Rimma Ivanova was posthumously awarded the officer's Order of St. George IV degree. She became the second (after the founder Catherine the Great) and the last Russian citizen, awarded for 150 years of its existence.

In the third month of the war, Elizabeth Alexandrovna Girenkova, Sister of Mercy, was awarded the Order of St. George of the First Degree “for outstanding bravery shown under enemy fire in rendering assistance to the wounded.” Baroness Yevgenia Petrovna Toll was wounded three times by the end of the second year of the war, was awarded the cross of St. George of the IV degree and presented to the third and second. 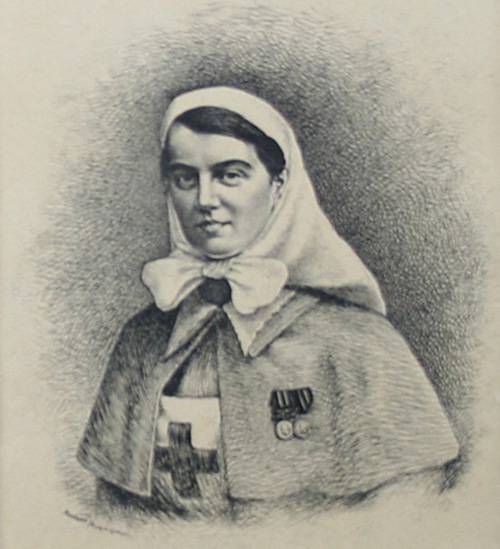 Grand Duchess Maria Pavlovna Romanova worked for more than a year as a sister of mercy in a front-line hospital with a simple sister of mercy, and was awarded two St. George medals.

The most active participation in the activities of the sisters was taken by women of all classes, including the highest. I would like to remind you about the sisters of mercy of the highest rank in the country, undeservedly forgotten, offended and slandered.

Empress Alexandra Fyodorovna was one of the leaders of the Russian Red Cross Society and the sisters of mercy communities from the very beginning of the war in 1914. 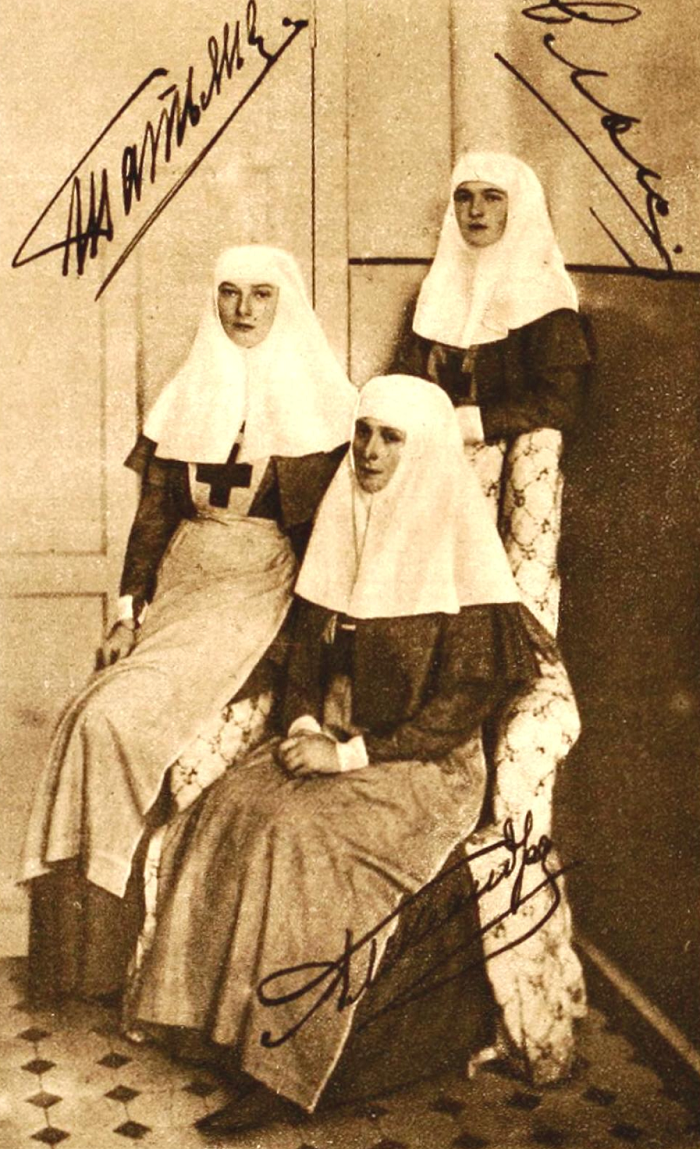 With like-minded people and assistants, she turned the city of Tsarskoye Selo and a large part of the Winter Palace into the world's largest military medical hospital and rehabilitation centers, which were equipped with the most advanced medical equipment. Therefore, the heaviest wounded were brought there, followed by the empress herself, who went to the front in sanitary trains. 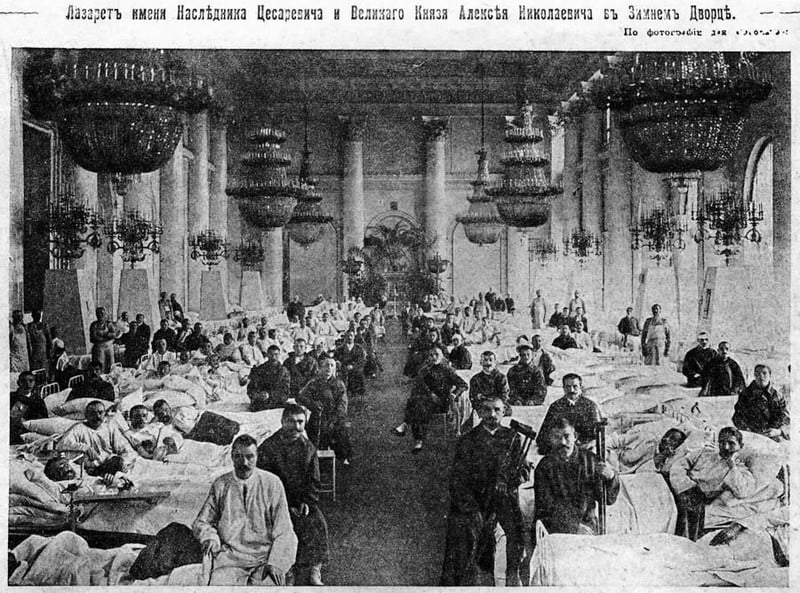 Infirmary in the Winter Palace, 1915

In 1914, under the tutelage of the empress and her daughters, only in Tsarskoye Selo, 85 hospitals were opened in palaces, hospitals, private houses and cottages, starting with the Grand Catherine Palace and ending with cottages and mansions. Alexandra Feodorovna distributed donations for the needs of the war, adapted her palaces in Moscow and Petrograd to hospitals, organized the publication of medical journals, where advanced treatment methods were considered.

In the palace hospitals, she and her daughters organized courses for sisters of mercy and nurses. In the Winter Palace, the best ceremonial halls overlooking the Neva River, namely, the Nicholas Hall with the Military Gallery, Avan Hall, Field Marshals and the Heraldic Hall, were taken away to the wounded - just a thousand wounded. On her initiative, comfortable additions to the palaces were added to accommodate the wives and mothers of hospitalized soldiers, which had a very positive effect on the healing process of the wounded, and sanitary centers were organized, where women of all classes together prepared dressings for the wounded.

Still, the main responsibility for herself and all her four daughters was that she considered direct assistance to the wounded as sisters of mercy. In November, 1914, Alexandra Fedorovna, with her daughters Olga and Tatyana, and forty-two other sisters of the first wartime graduation, passed the exams and received a certificate of the military sister of mercy. Then they all went to the infirmary at the Palace Hospital as ordinary surgical nurses and daily tied up the wounded, including the seriously wounded.

Like any operating sister, the Empress served instruments, cotton wool and bandages, carried off amputated legs and arms, tied up gangrenous wounds, learned to quickly change the bed cover, without disturbing the patients, taking pride in the Red Cross patch.

From the letter of Empress Nicholas II. Tsarskoye Selo. 20 November 1914 G.: “We were present this morning (I, as usual, help deliver the tools, Olga thread the needles) at our first big amputation (the arm was taken from the shoulder itself). Then we were all doing dressings (in our small infirmary), and later very complex dressings in a large infirmary. I had to bandage the unfortunate with terrible wounds ... they are unlikely to remain men in the future, so everything is riddled with bullets. I washed everything, cleaned it, anointed it with iodine, covered it with petroleum jelly, tied it up - it all came out quite well. I made 3 similar dressings. My heart bleeds for them, so it is sad, being a wife and mother, I especially sympathize with them. " 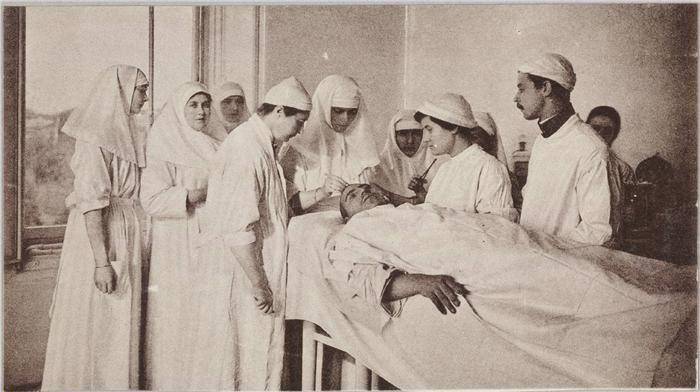 From the diary of a daughter, Tatyana Nikolaevna: “... There was an operation under local anesthesia to Gramovich, a bullet was cut out of the chest. She handed over the instruments ... She tied up Prokosheev's 14 of the Finnish regiment, chest wound, cheek and eye wound. She then tied up Ivanov, Melik-Adamov, Taube, Malygin ... ”. 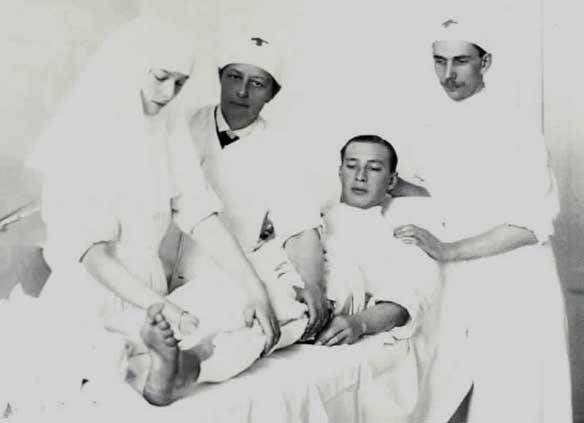 ROKK's sister Tatyana Romanova bandages the wounded under the guidance of the best surgeon of Russia Vera Gedroits.

From the diary of her daughter, Olga Nikolaevna: “... She tied up Porshes, Garmovich of the 64-th Kazan regiment, left wound of the knee, Ilyin 57-th Novodzinsky regiment, left shoulder wound, after Mgebriev, Poboevsky ....”. 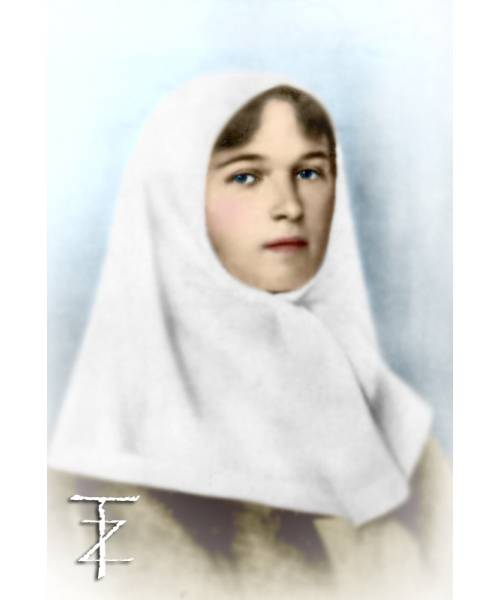 The younger daughters, Maria and Anastasia, took home courses of medical nurses and helped mothers and sisters in their hospitals in caring for the wounded, for which they were eternally grateful. 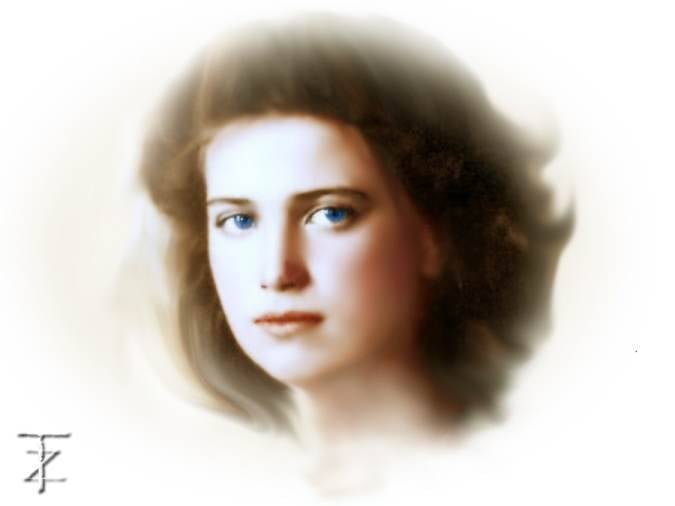 Poems of a wounded ensign, the great Russian poet Nikolai Gumilyov, a patient of the Tsarskoye Selo infirmary of the Grand Palace, dedicated to Anastasia on behalf of a group of wounded officers.

Today is the day of Anastasia,
And we want through us
Love and caress of all Russia
Thank you to hear from you.
What a joy to congratulate us
You, the best image of our dreams,
And put a modest signature
At the bottom of the greeting poems.
Forgetting that the day before
We were in fierce battles
We are the feast of the fifth of June
In our celebrate hearts.
And we are taking to the new seche
Full of delight,
Remembering our meetings
Among Tsarskoye Selo palace.

This work was not a show: this is how their immediate boss, the best surgeon of Russia Vera Ignatyevna Gedroyts, who did not like autocracy in general, and referred to them with caution at first, spoke about these sisters of mercy, "They did not play sisters, as I had to repeatedly see later in many secular women, namely, they were in the best sense of the word."

Tatiana Melnik, the daughter of Doctor Botkin: “Doctor Derevenko, a very demanding person in relation to the sisters, told me after the revolution that he rarely had to meet such a calm, clever and efficient surgical nurse, like Tatiana Nikolaevna."

These sisters of mercy have helped hundreds of wounded defenders of the Fatherland, thereby saving many lives. Is it possible to imagine that wives and daughters of the highest Bolshevik bonzes (before and after 91 r) serve as surgical nurses?

Alexandra Feodorovna and daughters showed concern for those who died from injuries: according to her order, the first official fraternal cemetery of those who fell for the Fatherland during the First World War was opened for the first time in Tsarskoye Selo. At her own expense, the empress built a church. The royal family personally escorted many of those buried here on their last journey, and took care of the graves.

The communists subsequently demolished the cemetery with bulldozers and built ... gardens on them. Today, on the site of the cemetery, there is a granite monument-a cross in honor of those who fell for the Motherland in the Great War, one of the few that exist in Russia in memory of the Great War. 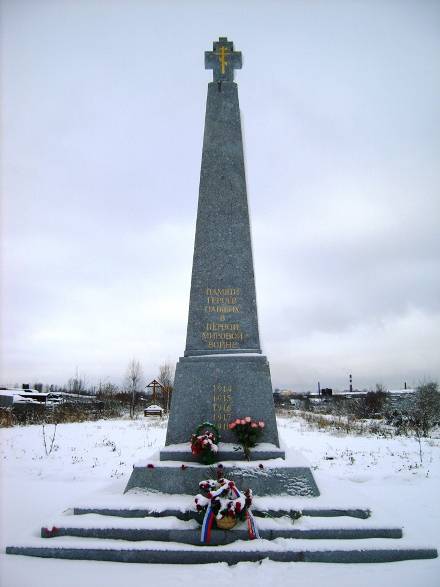 Monument to fallen soldiers in the First World War 1914-1918 on the site of the Fraternal Cemetery of Tsarskoye Selo (2008), around the gardens on the graves.

After the arrest of the royal family, hospitals and hospitals fell into complete decay and the wounded were left without proper care. The unique Zimnyi infirmary was ransacked and closed on October 27, and the hospitals of the Fedorovsky town of Tsarskoye Selo were closed down.

Even when they were in Tobolsk, Alexandra Feodorovna and her daughters were interested in the condition of the hospitals, where they served and worried about their decay ... Their lives were tragically and terribly cut off: Alexandra Fedorovna, the Russian Red Cross sisters of mercy, Tatyana Nikolaevna, Olga Nikolaevna, Maria Nikolaevna, Anastasia Romanov, who saved many and many lives of wounded Russian soldiers, were brutally murdered by the Bolshevik nonhumans along with their families and friends.

The massacre was savage: at first Alexandra Fyodorovna was killed in front of the children, then the girls and the boy, who later awoke Anastasia, were finished off with bayonets. They were killed by their cowards, who never fought at the front and therefore did not even realize what a terrible crime it was to kill the sister of mercy.

The names of these selfless, beautiful women of Russia, the true Sisters of Mercy, who sincerely gave their hearts and hands to the treatment and restoration of the wounded defenders of the Fatherland, will forever remain in the hearts of grateful citizens of Russia, eternal honor and glory. They lived, and will live forever in the descendants of wounded soldiers and officers of Russia who were going out with their hands. 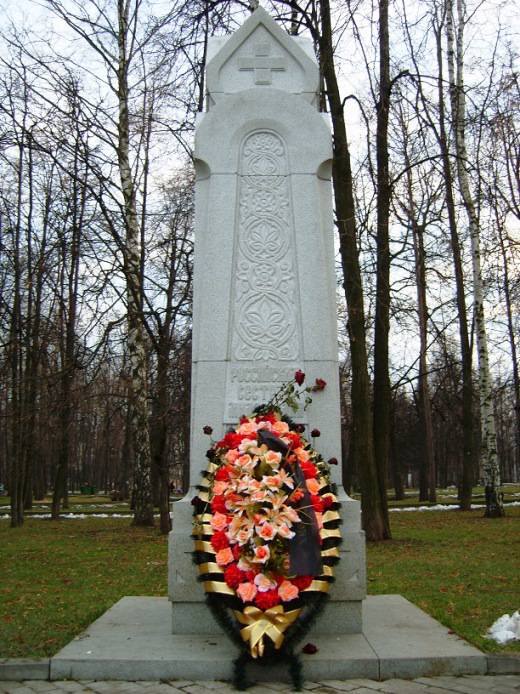 Monument to the Russian Sisters of Mercy

Ctrl Enter
Noticed oshЫbku Highlight text and press. Ctrl + Enter
We are
"The war has no female face." Memories of Female VeteransWar is not a woman's face?
Military Reviewin Yandex News
Military Reviewin Google News
8 comments
Information
Dear reader, to leave comments on the publication, you must sign in.