Voenkor "Mag" about the situation in the Donetsk Republic

July 28 2016
54
Blog chervonec_001 published another summary of the military officer "Mag" about events in the self-proclaimed Donetsk Republic. 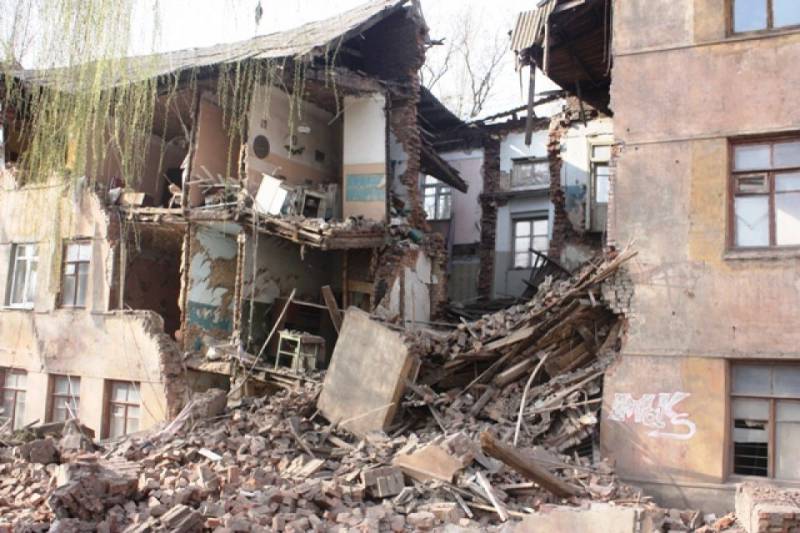 “The General Staff of the Armed Forces of Ukraine continues to tighten mercenaries and the national battalions. It is also open in the afternoon, it is sending a large amount of equipment, mainly artillery and self-propelled guns, on the railway and car roads.

18 July, Monday.
As usual, the shelling started the night before, closer to midnight, only gained strength.

In 00: 00, a large UAV was shot down over the Petrovsky district, residents of several areas saw and heard a short flash and the ensuing pop. After that, the APU with frenzy began to cover the Petrovsky and Kirov districts of 82-mm and 120-mm mines.

00: 35 continues the shelling of VSN positions in the area between Staromikhaylovka and the Airport.

01: 20 Under the cover of shelling by subunits of the 10-th OGShBR, another attempt was made to attack our positions north-west of Starikhailovka. Our intelligence during the time marked the advancement of the enemy and requested artillery support. The attack of the Armed Forces of Ukraine collapsed before it began, while the Armed Forces suffered losses - three were killed and five wounded. The command of the DPR is negotiating to transfer the bodies of the dead soldiers of the 10 st.

01: 30 battles do not stop, the Armed Forces of Ukraine are firing machine guns, mortars and BMP-2 residential complex Petrovsky district. In the area of ​​Avdeevskaya promka and nuclear warheads (the Yasinovatsky block of the fast), battles have been going on for five hours now with different intensity.

02: 15 continues shelling of the Petrovsky and Kirovsky districts, the APU has connected howitzers D-30. 02: 20-02: Our 40 began to respond with arta, to the west of Krasnogorovka. According to residents in the positions of the battery APU can see a fire.

In 02: 50 Ours began to respond to the mortar batteries of the Armed Forces of Ukraine, which had fired at Zaitsevo. Here is how the Ukrainian military leader Roman Bochkala writes about this: “I didn’t want to write, I hoped that it wouldn’t be confirmed ... But in the General Staff they say yes. Yesterday at 3 in the morning, between Zaytsevo and Mayorsky there was a direct hit in the position of the 53 team. We have loss: 4 "two hundredth" and 3 "three hundredth. In general, the situation in the Zaitsevo district has noticeably worsened. "

03: 00 all stopped, residents and the military went, finally, to sleep.

Early in the morning there was a storm warning. Around the 06: The morning's 00 started a strong wind that broke billboards and broke trees. Until the evening it was quiet, not counting the thunder on the horizon.

In 20: 50, a heavy bombardment of the YaBP (Yasinovatsky block post) began, several 120-mm mortar batteries and 122-mm howitzers were working at the same time. The shelling of the Petrovsky district began with the same intensity. From the center of the city there went a column of ambulances and fire engines.

At the same time, shelling of two villages north of Gorlovka began - Zaitsevo and Golmovsky. APU use AGS, grenade launchers and mortars, while without technology.

19 July, Tuesday.
00: 00 Fighting and shelling continue in the same direction, the APU widely used artillery. Petrovsky, Kirovsky districts of Donetsk and the floor of Gorlovka sit without electricity.

17: 30 began a strong battle near the airport and the village of Spartak. On both sides are working snipers, small, AGS, grenade launchers, mortars. APU also used equipment.

21: 00 Gorlovka from the north and northwest under fire, mainly mortars 82-mm and 120-mm.
21: 50 Kuibyshev district plunged into darkness. After the shelling, one of the 120-mm mines hit the substation. Fighting is still continuing in the area of ​​the Airport, Spartak, YaBP.
22: The 00 DPR anti-aircraft gun shoots something knocked over my house.

22: 35 Gorlovka began to fire from three sides. Mainly arrivals from Dzerzhinsk.
In the area of ​​Svetlodarsk battles periodically erupt. 22: The 40 of the Ukrainian Armed Forces almost without interruption bombarded 122-mm and 152-mm shells against the northern suburbs of Donetsk, maybe they were also beating mortars, but because of the general rumble they were not heard. Not to mention rifle.

22: 40 under the cover of mortars and occasionally working equipment, the APU tried to break through our positions in the Svetlodarsk-Debaltsevo area. Fighters of the DPR observed movement north of Debaltseve near the village of Sanzharovka. Remembering the recent attempts at a breakthrough, the guys did not tempt fate and called for artillery support. A short artillery attack scattered the assault groups of the Ukrainian Armed Forces and the battalions. Officially, the APU lost 15 killed and several dozen wounded. Ambulances between Svetlodarsk and Artyomovsk wound until the morning, taking the dead and wounded out.

22: 50 VSN began to give an answer through the line Water - Skilled - Avdiivka. In 23: 50 responded again on the same line. The APU immediately stopped shelling the airport - Spartak - YaBP.

During the day, the territory of the republic was subjected to 702 times. On this day, a BMP of the Armed Forces of Ukraine with a landing force on board exploded a mine, 7 soldiers were killed and 14 was wounded. The hospital APU received 29 injured.

20 July, Wednesday
03: 30 Fight with the use of art in the area of ​​the warhead. Hit 120-mm mines in the substation, the neighboring Yakovlevka was left without light.
In the morning and in the afternoon it was quiet.
In 20: 20 in the Airport - Spartak - YaBP area, battles begin. Small, mortars 82-mm.
22: The 20 southern front in the Shirokino area started a battle. Our sniper shot the Azov spotter.
22: 30 APB under heavy artillery shelling, ours respond.
22: 45 South Front strong combat, mortars, art and technology. Residents of Donetsk, who came to rest on the sea in the village of Sedovo, could not enjoy the silence and every evening they hear arta from Shirokino.
This evening, there were fewer shelling, just a day the republic was fired 308 times. Kharkiv Hospital received 18 wounded soldiers of the Armed Forces of Ukraine.

21 July, Thursday.
In fact, the whole day was quiet. Approximately in 15 hours the UAV appeared. Then came the arrivals 82-mm and 120-mm min. Work of memory and BMP.
16: 00 over Gorlovka. The DPR air defense system shot down a large UAV.
18: 20 APM under shelling snipers, AGS and mortars.
19: 00 started the fight Marinka - Petrovsky district. Work mortars on both sides. APU periodically use a pair of "Non."

20: 40 APU long-range artillery beating at the airport - Spartak - Oktyabrsky. Several 122-mm projectile arrivals in the Putilov Forest (Kievsky District).
20: Our artillery 50 is trying to suppress the siege batteries of the APU.
21: 20 Petrovsky district suffers from heavy shelling. APU beating on residential areas.
22: 15 There is continued strong fighting in the areas of the airport, Spartak, YaBP, Gorlovka. Armed Forces of Ukraine apply all types of weapons from small arms, arts to armored vehicles. 23: 20 is a distant frequent cannonade.

23: 20 northern suburbs of Donetsk under heavy artillery shelling of the APU. Kuibyshevsky Kiev districts without electricity.
23: 40 again cannon. The APU operates in squares, flies closer and closer.
During the day, the republic was fired 640 times. Kharkov hospitals took 20 wounded soldiers of the Armed Forces of Ukraine.

In 20: 20, snipers began exchanging gunfire, exchanging mortar attacks in the airport and AB area.
21: 05 with the direction of Troitskoe began to fly 122-mm projectiles through the mines southwest of Horlivka.
With 22: 40, our art immediately send messages from several directions to the APU batteries.
22: 50 in a southerly direction are firing on the positions of the VSN in the Kominternovo region.

23: 10 our art is responsible for the APU batteries in the Avdiivka area. Positions show fire and detonation!

23: 25 Sands - Airport battle, mortars and art cover up a small assault group of the Armed Forces of Ukraine, which is trying to attack our positions. VSN repulsed the attack.

In just one day, the republic was fired 351 times. Kharkov hospitals took 12 wounded soldiers of the Armed Forces of Ukraine.

23 July, Saturday.
00: 55 shelling of the Petrovsky district and Staromikhailovka continues.

From 01: 50, every 30 seconds, cannonad is heard in the Kuibyshev district. With 02: ArtNuell started XDUMX, every two seconds there are pros and cons. Flashing light.

05: 00 is heard short fight near the airport
06: 00 battle near Shyrokino
07: 40 Sands - Airport heavy shelling mortars. Since the winter of 2015, there has been no such thing so that there is a fight a few hours early in the morning and then shelling.

APU tried to make a breakthrough early in the morning. The calculation was a surprise, because everyone is waiting for evening and night battles, and early in the morning and in the afternoon they sleep off. Nevertheless, the attack fell, the APU lost to 10 people killed, while trying to penetrate the front line near the airport. Our intelligence service noticed an accumulation of infantry in the Skilled area and waited for permission from the command to open fire. After half an hour, the person began to move in the number of 12 units of the Armed Forces of Ukraine, the VSN command gave the go-ahead to liquidate the enemy, as a result of which the APU lost up to 10 dead.

09: 00 battles and firing mines began in Avdeevskom promka. As they say friends in the militia - We have our own Syria and Aleppo.

10: Troitskoe 00 also began fighting and exchanging mortar courtesies. Hours in 11 all front calmed down until the evening.

During the day, the republic was fired 610 times. 18 wounded were admitted to Kharkov hospitals, many were heavy.

13: 30 bombardment of the YaBP and the Airport area from mortars 82-mm and 120-mm
14: 40 The fights in the areas of the Airport, Spartak and YaBP do not stop. Serious shelling is the positions of the BCH.

19: The 00 northern districts of Donetsk are well aware of the fighting near the Airport - Spartak - YaBP. On the positions of the republic dozens of mines and shells are flying, in the sky of Donetsk several anti-aircraft guns drive anti-aircraft guns. Baghdad some, and not Donetsk. A very strong cannonade near the airport lasts almost two hours.

21: The 20 battle does not stop in the areas of Airport - Spartak - YaBP. The artillery of the Ukrainian Armed Forces is rampant. A salvo of two shells, then 5-6 seconds quietly and again two 152-mm shells fly in.
21: 40 under Shirokino a strong battle with the use of art on both sides.
22: 15 in the north of Gorlovka is a shooting battle.

In 23: Our 50 began to give an answer on the long-range artillery of the APU. The last time they were covered in February of this year. In the area of ​​the village Zhelanoe there are two batteries Msta-B 55 of the APU brigade. One of them and covered in the night from Sunday to Monday. As a result, the 1 gun was completely destroyed, three badly damaged. Losses of the APU amounted to 11 dead and 18 injured.

During the day, the republic was fired 570 times. Kharkiv hospital received 24 wounded fighter, almost all heavy.

As you can see, the number of battles and shelling has increased significantly. A lot of dead and wounded. The goals that the General Staff of the Armed Forces of Ukraine puts before its brigades raise big questions. For a week, the APU lost several dozen killed and up to a hundred wounded. For the sake of what, it is not clear.