Raid for the language of the group DS Pokramovich 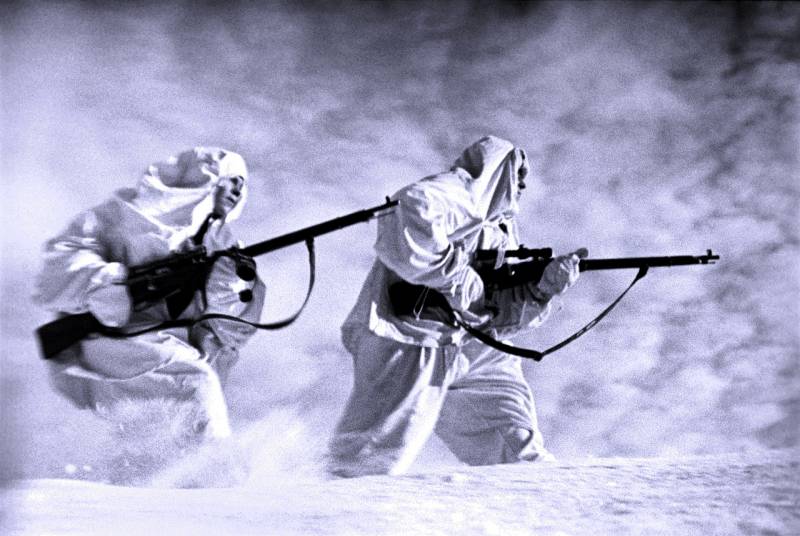 In January, the 1944 of the 14 th rifle division (14 Army of the Karelian Front), which was defending in the Greater Western Litsa, intensified enemy reconnaissance and increased enemy movement on the roads. At the same time, several new radio transmitters were detected. In order to clarify the enemy’s groupings and establish his plans, the division commander decided to send a reconnaissance group to the enemy’s location and capture the “language”.

In the area of ​​Dikoe Lake, where the 95 th infantry regiment of the division was defending, the enemy defense consisted of a number of individual platoon and company strongpoints. The connection between them was maintained by oncoming patrols. Thus, it was easier to take prisoners on this section of the front than on the rest. It was decided to send an intelligence group there.

Here were the units of the 388 Infantry Brigade. The Nazis had a well-organized defense, which was strengthened for two years. Its main strip was equipped with a large number of engineering structures and barriers. Our command chose a stronghold at the height of 9,8 in 10 km west of Big Western Litsa as an object of attack. According to intelligence data, the stronghold garrison was about 50 people.

The stronghold had three pillboxes laid out of stone, with overlappings, several machine-gun platforms and rifle cells, interconnected by trenches. The approaches to the strong point were covered with fire from 10,2 height, located near 600 m south-west of it, and from the Fortified height and southern slopes of Gorelaya height (respectively, 1 km to the north and 2 km north-east of 9,8 height). Before the front edge and on the flanks, mines of tension and pressure actions were installed, as well as blockages were arranged. When covering and attacking the approaches to their stronghold, the fascists paid particular attention to the south-eastern and southern directions, apparently considering them most convenient for attack. The territory between the strongholds was fully viewed and swept, with the exception of a small slope running along the southern slopes of Gorelaya height.

To capture the fascists, the division commander ordered the formation of a reconnaissance group as part of the 35-th separate reconnaissance company, reinforced by a platoon of a separate ski battalion of the division and a detachment of sappers. To command her, he appointed the company commander, Senior Lieutenant DS Pokramovich. (He was told in the article Legendary scout of the Karelian Front .) At the headquarters of the division, an action plan was developed and approved by the division commander to destroy the stronghold and capture prisoners. 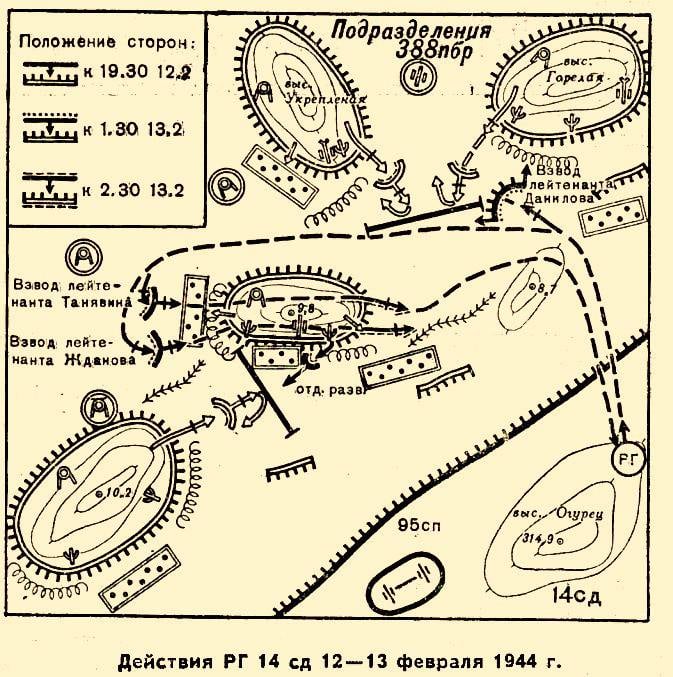 Two subgroups of the reconnaissance group were under cover of a platoon of a separate ski battalion, which was to be in combat readiness to repel possible enemy counterattacks from the north and north-west and, if necessary, to provide cover for the withdrawal of the main forces (35 of the separate reconnaissance). After performing the main task, he needed to attack the enemy stronghold, destroy the German garrison, capture the control prisoners and destroy the pillboxes and other structures.

The route was marked by the height of Gorelaya, devoid of folds and vegetation, to the southern slopes, where the enemy least expected the attack. The actions of the reconnaissance group were to support the 1-I and 2-i batteries of the 143-th artillery regiment, the 1-I and 3-I mortar companies of the 95-nd rifle regiment and the 1-I battery of the 275-th mortar regiment. With the beginning of the attack, the reconnaissance group of the stronghold had to suppress the enemy firing points to the north and south-west of the stormed object and be ready to open a fixed barrier fire (NZO) in the event of possible enemy counterattacks.

Communication with the reconnaissance group was planned to be carried out by radio (a special negotiation table was developed for this), artillery fire control from the observation point (NP) of the division intelligence chief equipped at the height of Gherkin, target designation with tracer shells from an anti-tank gun. Since January 25, the reconnaissance team has been preparing for the task. Training sessions were conducted with the development of topics: “Fight of a rifle company to master a stronghold in the polar night”, “Organization of a march of a rifle company in winter in the tundra”. Also, 7 practical exercises were conducted on specially selected and equipped terrain, where actions to overcome mine and wire obstacle systems, blocking and destroying firing points, and management issues were worked out. The management of the classes was carried out by the officers of the division headquarters. After each of them, the chief of staff, Lieutenant Colonel V.I. Tarasov conducted a brief analysis, pointing to the positive and negative sides in the actions of the detachments and platoons, individual soldiers and officers. Considerable attention was paid to the organization of interaction between subgroups, as well as with supporting artillery and mortar units in the polar night. Also in the subgroups were appointed agitators, who were personally instructed by the head of the political department of the division. Political exercises, conversations were held with the fighters, and Sovinformburo reports were read daily.

The intelligence group was formed from physically resilient warriors, who skied well and had considerable experience in fighting in the Arctic. In addition to standard weapons, the scouts received 72 anti-tank and 128 hand grenades, 5 concentrated charges (for 6 kg of explosives) to complete the task. All personnel were provided with skis, white camouflage coats, sheepskin jackets, felt boots and a set of warm linen, as well as individual sanpaketami and ointment against frostbite.

The terrain in the area of ​​planned actions was flat, covered in some places with shrubs. The depth of the snow cover reached 70 cm, which made it impossible to move off-road without skiing. In 19 h 30 mines 12 February 1944, the reconnaissance team under cover of darkness on skis set off. Ahead was a platoon of a separate ski battalion of Lieutenant A.F. Danilov (a covering group), followed by 50's reconnaissance platoon (subgroup of the suppression and destruction of firing points), headed by lieutenant N.I., at a distance of 2 m. Zhdanov, then - 1-th platoon of scouts of Lieutenant A.V. Taniavina (a subgroup of attacks on dugouts and capture of prisoners). Movement closed control cell.

Reaching the foot of the 8,7 altitude, the cover group, following the command of Senior Lieutenant Pokramovich, advanced to the southern slopes of Gorelaya altitude. The rest of the scouts approached the stronghold from the west and lay down at a distance of 250-300. After orientation to the terrain and clarification of tasks, both subgroups began to move to the line of attack. The Zhdanov subgroup - to the firing points on the western slope of the height, the Tanyavin subgroup - to the dugouts. Upon receiving reports from the subgroup commanders on the initial position, Senior Lieutenant Pokramovich at 1 h 30 min reported on the radio about readiness to storm the strong point and caused artillery fire.

Followed by a strong fire raid. With its beginning, the fighters of both subgroups swiftly reached the first row of wire obstacles. Following the example of Private Nikolai Ignatenkov, several scouts dropped their coats and lay down on a wire, creating a living bridge along which the rest of the fighters passed. Similarly, the second row of wire barriers was overcome. The appearance of the scouts in the location of the strong point for the fascists was a complete surprise. Not allowing the enemy to come to his senses, both subgroups swiftly attacked objects determined by him.

The soldiers of the platoon of Lieutenant Zhdanov bombarded pillboxes with grenades, destroying enemy soldiers hiding there from artillery fire. A few minutes later, three firing points were destroyed, while up to twenty Nazis were destroyed and two were captured, two machine guns were captured. After completing the task, the scouts took up defenses south-east of the stronghold to prevent a reconnaissance group from a stronghold at the height of 10,2.

Meanwhile, a subgroup of Lieutenant Tanyavina went to the area of ​​dugouts. After removing the sentry, the scouts threw three dugouts with grenades, exterminating the fascists who were in them. With two captured Nazis, the subgroup began to move quickly. The suddenness and speed of action ensured success. In a short time, the stronghold was destroyed and destroyed to fifty fascists. In addition, the scouts captured four prisoners, two machine guns and documents. 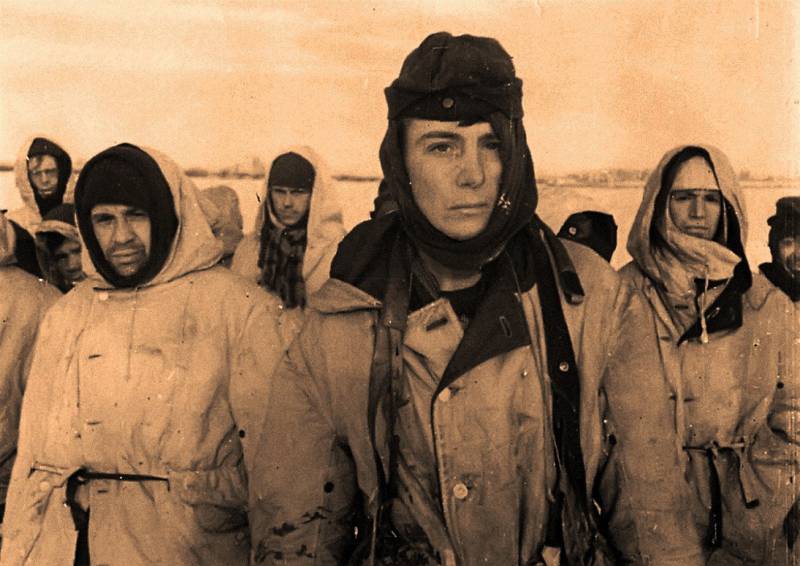 During the transient battle, the reconnaissance group was not opposed by the garrisons of the neighboring strongholds. However, when our warriors began to withdraw, the Nazis came to their senses and first opened machine-gun, and soon artillery-mortar fire. Simultaneously, from the height of 10,2, an adversary group numbering up to the platoon came out and began to pursue the scouts. Two groups, numbering up to 40 people, appeared from the height of Gorelaya (on the left flank of the reconnaissance group). The reconnaissance squad following in the rear guard met the pursuing group with machine-gun fire and forced them to lie down in an open area. A platoon of Lieutenant Danilov, who was in ambush on the approaches to the height of Gorelaya, started a fight with two other groups and also stopped them. At the same time, the commander of the reconnaissance group caused our artillery to fire. A few minutes later, Soviet shells and mines began to burst in the chains of the counterattacking fascists. There was confusion in their ranks. Unable to withstand the dense fire, the Nazis began to hurry away.

The scout group returned safely to the location of the 95 Infantry Regiment. The task was completed. The captured enemy soldiers gave valuable information about the defense and the grouping of the fascists. The losses of our scouts amounted to: one killed and six wounded. The success of the reconnaissance actions was ensured by thorough and comprehensive training of personnel for the upcoming actions. The decision to organize and conduct the battle was reasonable. The exit route to the control point is well chosen. Using it, our scouts managed to achieve surprise actions. A great role was played by well-organized interaction between subgroups of the reconnaissance group, as well as supporting fire weapons. All this was clearly coordinated in time and boundaries. The data for gunners and mortar gunners were carefully prepared in advance, timely and effective artillery fire contributed to the success of the scouts.

The swiftness of action, initiative, resourcefulness, courage, and high skill of the warriors ensured the effectiveness of the task with minimal losses. Having a good command of hand-to-hand combat, being able to navigate the terrain and act in the dark, they were able to use disguise measures to covertly and accurately reach a given object and suddenly attack it. For the skilful leadership of the unit’s actions in the destruction of a strongly fortified enemy stronghold and the capture of prisoners, the commander of the 35 th separate reconnaissance company of the 14 rifle division was Lieutenant Dmitry Semenovich Pokramovich was awarded the Order of Alexander Nevsky. High awards awarded many warriors company.