July 28 2016
46
Recently, the world's media wrote about the decision taken by the International Tribunal regarding the territorial claims of the PRC in the South China Sea. Analysts again talked about the possibility of confrontation in the region. However, as noted by some experts, in addition to this sea, there is another “strategic water basin”, which can be described as a hotbed of “tension” and almost a “hot spot”. Speech about the Black Sea. 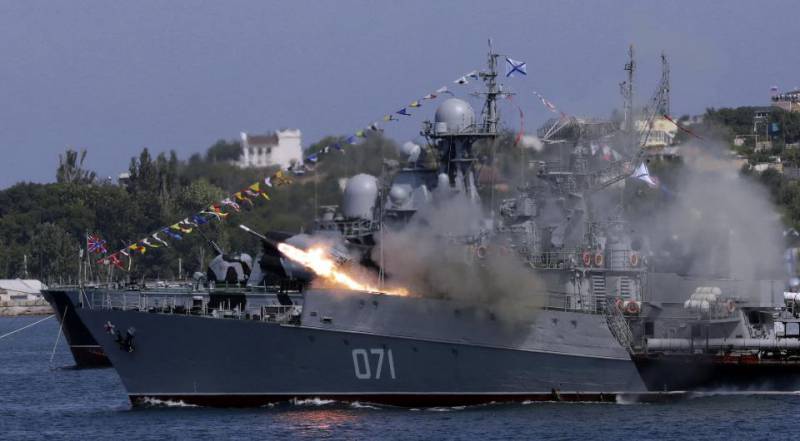 As the browser writes "Forbes" Paul Koyer, the recent decision of the International Tribunal over China’s expansionist claims in the South China Sea, as well as confidence in the ongoing confrontation in that region, reminded of another “strategic water basin” where “high tensions” are noted and there is a “high probability” of military conflict. Nevertheless, experts for some reason do not particularly focus on this region - the Black Sea.

Meanwhile, this sea has long played a key military and economic role for local countries. The sea is rich in resources. In addition, it is historical an arena of geopolitical conflict because of its strategic position. In our time, this only emphasizes the importance of the region in the "confrontation between Russia and the West," since "Russia occupied Crimea." In this regard, the author points out, Russia's neighbors in the Black Sea are increasingly turning to cooperation: joint naval maneuvers and joint defense issues. They strengthen their defenses in order to confront Russia and will not allow the transfer of full control of the Black Sea to Moscow.

The browser lists the countries that have their own interests here.

Then Georgia. This republic, Paul Koyer points out, also occupies an important strategic position and needs free navigation in the Black Sea: this is its way to Europe. If the Russians had gained complete control over the sea, this would have led to the isolation of Georgia from its western partners. Tbilisi would be vulnerable to Moscow.

Finally, Ukraine. If recently Moscow, which annexed Crimea, gained a strategic advantage, then Kiev suffered a loss. For Ukraine, access to the sea is vital both in strategic and economic aspects, and Russia, the American author believes, from the Crimea can block Ukraine’s access to the Black Sea via the Dnieper and Dniester.

Crimea became the center of Russian naval power as early as the 18th century (after Tsarist Russia defeated the Ottoman Empire in a series of wars). Access to the Black Sea was one of the reasons for the Crimean War of the mid-19th century. One of the main reasons why Russia lost the war to Britain, France and the Ottoman Empire was Russia's inability to fully control the Black Sea: its enemies dominated there. After losing the war, Russia has strategically suffered: it did not have the full right to place its warships at sea. The author calls this situation a "strategic nightmare." And it was precisely the awareness of the same situation that was one of the factors that led to Moscow’s concern about the debates in Kiev about Russia's refusal to rent a base in Sevastopol. All this contributed to the “Putin’s decision to annex the peninsula”: after all, euromaidan led Moscow to lose its ally, Yanukovich.

As the journalist writes further, complete control over the Crimea and the Black Sea would give Russia superiority in the entire local region, including in the “centuries-old geopolitical rivalry with Turkey.”

In addition to the defense importance of the city of Sevastopol, Moscow sees its sea base as an object that is crucial for Russia's ability to implement a naval modernization project at the global level. Moscow wants to expand its naval presence in the world, as well as its influence in the Mediterranean, the Atlantic Ocean and the Persian Gulf, the author is sure. Without Crimea, the global rise of Russia would not have such a weight.

Russia's determination to control the Black Sea, therefore, has deep historical roots and a clear strategic rationale, the author sums up.

However, the analyst does not agree that the behavior of the Russian Federation is exclusively “defensive in nature”. With this argument, the author "is not easy to agree", because he observes "the picture of Russian aggression over the past few years." In particular, Koyera is worried about the “dramatic expansion of Russian military power in the Black Sea,” as a result of which other Black Sea states are “more and more nervous”.

True, the possibilities of the Russian fleet "Significantly lagging behind" the corresponding capabilities of the US Navy. In general, it is highly unlikely that the Russian Navy could “ever again” achieve the power that the Soviet fleet had. Nevertheless, the Russians can pose a serious challenge to the United States and NATO, restricting their freedom of action in the Black Sea. At the end of last year, Russia demonstrated some of its capabilities by launching cruise missiles and hitting targets in Syria. This demonstration, the observer is sure, was addressed to the West and the Black Sea neighbors of Russia.

“The aggressive behavior of Russia,” the author continues, seems to be intended as a signal, signifying Moscow’s willingness to take a risky conflict. If the United States and NATO are not willing to take risks, then they will have to retreat. “It reminds of China’s behavior in the South China Sea, isn’t it?” The journalist notes.

And it was not without reason that Turkish President Recep Erdogan warned in May that Russia was turning the Black Sea into a “Russian lake”.

The “loyalty” of the West to Moscow on the issue of control over the Black Sea will have negative strategic consequences that go far beyond the issue of military advantage in the Black Sea, the analyst concludes. The events of recent history show that Vladimir Putin will take advantage of all the advantages that the West will provide him.

Recall that this spring in the press there were reports of the desire of NATO to take control of the Black Sea. The goal is to "contain Russia". This was announced at the end of April in Sofia by NATO Deputy Secretary General Alexander Vershbow. He participated in the Atlantic Club meeting as part of the Black Sea Security Conference.

"There are very valuable discussions with allies who live on the Black Sea coast ... about closer integration of their naval forces," Vershbow quotes. RBC.

According to him, NATO is already patrolling the sea, and yet the Allies could "expand their presence" in the region.

Vershbow is convinced that Russia's strategy in the Black Sea "is part of a global effort to assert itself - efforts that extend from the Arctic to Syria and that threaten to challenge the unity of NATO, as well as the territorial integrity of the alliance."

Undoubtedly, we add, Erdogan's later remarks about the “Russian lake” became the voice of all in the same NATO choir. The West does not want and, of course, will never wish to strengthen the Russian presence in the Black Sea. This region really becomes like a “hot spot”.

Observed and commented on Oleg Chuvakin
- especially for topwar.ru
Ctrl Enter
Noticed oshЫbku Highlight text and press. Ctrl + Enter
We are
Results of the week. “There were good people ... Warmed up, robbed. That is, picked up, warmed ... "Strangulation: the context, conduct and consequences of the American naval blockade of China
Military Reviewin Yandex News
Military Reviewin Google News
46 comments
Information
Dear reader, to leave comments on the publication, you must sign in.