Death of a transit state: Ukraine becomes the cecum of Eurasia 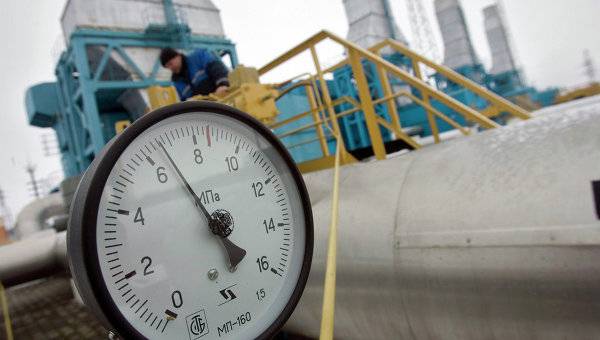 In January of this year, a freight train was launched on the route Ilyichevsk-China by Ukraine as part of the noisy project "New Silk Road". However, he did not return back. Could not find customers.

The gradual collapse of Russian gas transit through the territory of Ukraine, which threatens to eventually turn the Ukrainian gas transportation system into a pile of scrap metal, is an element of the large-scale and inevitable process of Ukraine’s loss of its traditional transit positions.

Russia deliberately gets rid of transit intermediaries. This is part of its geo-economic strategy. That is why in recent years the transit of oil through its territory has decreased in a catastrophic way for Ukraine.

The volume of the maximum pumping of this energy carrier in the Ukrainian "pipe" can be 67 million tons per year. Such is its throughput. However, already in 2002, it dropped to 27 mln. Tons. This happened after Russia built the Sukhodol'na-Rodionovskaya oil pipeline (2001 million tons of oil per year) in 28, which directly connected two Russian oil pipelines bypassing Ukraine: Samara-Lisichansk and Lysychansk-Tikhoretsk.

However, 2001 year was only a touchstone in the implementation of the Russian energy strategy. The fact is that in 2008, Vladimir Putin made the final decision to allow all Russian oil traffic to bypass the transit countries. As a result of this decision, in 2012, Russia completed the construction of the Baltic pipeline system (BTS-1 and BTS-2) with a total throughput of 80 million tons of oil per year.

BTS-2 is a branch from the Druzhba pipeline section near the Russian-Ukrainian and Russian-Belarusian border. This pipeline system went along the cordon of the Russian Federation with Belarus, Latvia and Estonia to the port of Ust-Luga (in the Leningrad region), where an oil terminal with a capacity of 50 million tons of oil per year was built. Thus, Moscow redirected oil traffic bypassing Ukraine along the northern route. After entering the BTS-2 for Russia, there was no need to use the Ukrainian port "Yuzhny" (which is currently idle) and the Odessa-Brody pipeline (which is currently inactive).

In addition, since 2004, oil pumping bypassing Ukraine has been carried out by the Caspian Pipeline Consortium, which has connected the oil fields of Kazakhstan and Russia with the Yuzhnaya Ozereeevka terminal located near Novorossiysk. Currently CPC throughput is 40 million tons of oil per year. However, as First Deputy Energy Minister Alexei Teksler said in March at 2016, by the end of this year, the capacity of the Caspian Pipeline Consortium will increase to 67 million tons per year.

In connection with the implementation of the above projects, back in November 2008, First Deputy Head of the Presidential Secretariat of Ukraine Alexander Shlapak said that Ukraine is gradually losing the status of a transit state because it annually loses 5-10% of transit volume as a result of various international projects in the field of pipeline transport .

According to him, after the implementation of the first stages of the construction of the Caspian pipeline consortium and the Baltic pipeline system, Russia was able to transport up to 60 million tons of oil, bypassing the territory of Ukraine, Belarus and Poland. And when these projects will work at full capacity, Russia will be able to completely abandon the transit of oil through the territory of Ukraine, Belarus and the Baltic states.

It is not difficult to understand that as soon as the second phase of the Caspian Pipeline Consortium starts working at the end of this year, the oil transit through the territory of Ukraine will stop. This means that in 2017, the Ukrainian oil pipeline system can be cut for scrap. The damage to Ukraine from this is now estimated at hundreds of millions of dollars. However, such is the price for the dream of living without Russia.

However, the transit losses of Ukraine are not limited to gas and oil. In the near future, the country will also lose the transit of Russian ammonia.

The fact is that until recently, Russia could sell the ammonia it produced only through the Odessa port plant, where it was transported via the ammonia pipeline from the Togliatti Nitrogen Plant (TolyattiAzot OJSC).

However, at the moment, Russia is accelerating the construction of a new seaport on the Taman Peninsula, which will become the main transshipment terminal for ships with Russian ammonia and urea.

This project was developed at the end of 90, but its implementation began only at the end of 2014 after the “revolution of dignity” in Ukraine. Entering the first stage of the Taman terminal, with a throughput of about 2 million tons of ammonia per year, is scheduled for 2017 year. The second turn will be completed by 2020 year.

When the project is half earned, it will delay almost all the volumes of ammonia transported from Togliatti through the Odessa port plant. At the same time, Ukraine will lose not only transit, but also the required OPZ of raw materials. Those. not only the ammonia "pipe" will be unnecessary, but also the port plant itself, the port infrastructure for shipping urea, ammonia OPZ terminals, and so on.

From the above, it is not difficult to understand that next year Ukraine will be able to safely cut not only its own ammonia pipeline, but also the Odessa Portside Plant, for scrap, having forever said goodbye to tens of millions of dollars in annual profits.

Also, at an accelerated pace, Russia blocks the transit of its goods through the territory of Ukraine. At the moment, there is a rapid construction of the railway bypassing the Ukrainian territory in the Zhuravka-Millerovo section. A two-track electrified railway began to be built there in 2014 year. At the end of 2017, the kilometer-long 122 road will connect the Voronezh and Rostov regions without crossing the Ukrainian border.

It is worth mentioning that at the moment, due to the situation in the Donbass, international airlines such as Air France, Lufthansa, Aeroflot, Singapore Airlines, Emirates, Qatar Airways, British Airways stopped transit flights through the airspace of Ukraine. In addition, they reduced transit flights of Transaero, Turkish Airlines, LOT, Belavia. Part of the transit air traffic flows shifted north of Ukraine, and now passes through the airspace of Belarus and the Russian Federation, and some - to the south, into the airspace of Romania, Bulgaria and Turkey. Because of this, Ukraine is suffering significant financial losses.

Among other things, Ukraine began very big problems with the transit of its cargo.

In July, 2016, Russian President Vladimir Putin signed a decree that strengthens restrictions on the transit of goods from the territory of Ukraine. According to the decree, the transit of those Ukrainian goods that are sent through Russian territory to Kyrgyzstan and Kazakhstan and are subject to customs duties for deliveries to the Russian Federation is completely prohibited.

July 14 joined Belarus to block Ukrainian transit. Around 130 Ukrainian railway cars that were sent to Kazakhstan and Kyrgyzstan, were detained at the Belarusian border stations.

In connection with the halt of Ukrainian transit, on July 4, Deputy Minister of Economic Development and Trade of Ukraine Natalya Mikolskaya reported that Ukraine could lose about 90% of the export of Ukrainian goods to Kazakhstan and Kyrgyzstan. According to Mikolskaya, the introduction of additional transit restrictions on the part of Russia may lead to "almost complete stopping of the de facto transit of Ukrainian goods to Kazakhstan and Kyrgyzstan through the territory of the Russian Federation." “According to our preliminary estimates, it’s about 90% of our exports to these countries,” - said Mikolskaya.

At the same time, she added that Russia's economic restrictions last year had already led to a reduction in Ukrainian exports to Kazakhstan by 47,9%.

Apparently, this step of Russia, including, is a response to the attempts made by Ukraine in February 2016 of the year to block the transit of Russian trucks through Ukrainian territory. After the nationalists began to stop trucks with RF numbers, the Ukrainian government officially stopped their transit movements through the country on February 15.

However, later the Ukrainian patriots found that Ukrainian trucks that travel through the territory of the Russian Federation are 7 times more than Russian ones traveling through Ukraine, and the losses from the blockade of Russian trucks will be at least 115 billion hryvnias. What the adviser to the Minister of Infrastructure of Ukraine Roman Khmil reported.

At the moment, as stated in the Ukrainian government, Kiev is preparing "mirror sanctions" against Russia. However, in order to understand how ridiculous this threat sounds, one only needs to look at the geographical map. Apparently, the Ukrainian leadership has still not understood that Russia will always be able to go round Ukraine, and Ukraine will not be able to go round Russia, because of its scale, in principle. In the transit war, Kiev is helpless as a child.

This is evidenced by the facts.

As is known, in January of this year, a cargo train was launched along the Ilyichevsk-China route by Ukraine as part of the noisyly popular project “New Silk Road”. However, he did not return back. Could not find customers.

As this experiment showed, the delivery of goods by so-called. The “New Silk Road” turned out to be much longer than the usual route through Russia, and the complexity and irregularity of flights on this route does not make it possible to accurately plan transportation. But the most important thing is that the cost of transporting the 40-foot container declared by Ukrzaliznytsia is 5559 US dollars, which is 2-3 times more expensive than the cost of transporting the same weight by cars through Russia.

Those. test train start by so-called. The “New Silk Road” showed that this route is inexpedient in commercial terms, which means that it cannot become an alternative to transit through Russian territory.

By the way, the statistics of transit of goods through Russia also speaks about this. At the end of last year, Russian Railways published information on the transportation of Chinese goods through the Trans-Siberian Railway. The growth rate of traffic for the first 11 months increased by 89%, and for the year - by 98% (by 66 thousand TEU containers). Since 2009, the total volume of transportation of all goods on the Trans-Siberian Railway has increased by 7 times - up to 131 thousand TEU containers (20-foot containers). In essence, this is an explosive growth in traffic on the Trans-Siberian Railway. Today, there are eight China-Russia-Europe transit routes through Kazakhstan and Belarus. For each of these routes, several dozen container trains have been moving for several years. It should be borne in mind that the trade turnover between the EU and China is 564 billion dollars a year.

It is clear that a significant part of this transit pie could go to Ukraine. However, for the Ukrainian leadership the so-called. the fight against Russia, leading Ukraine to suicide, seems to be a higher priority than a profitable business that fills the Ukrainian treasury.