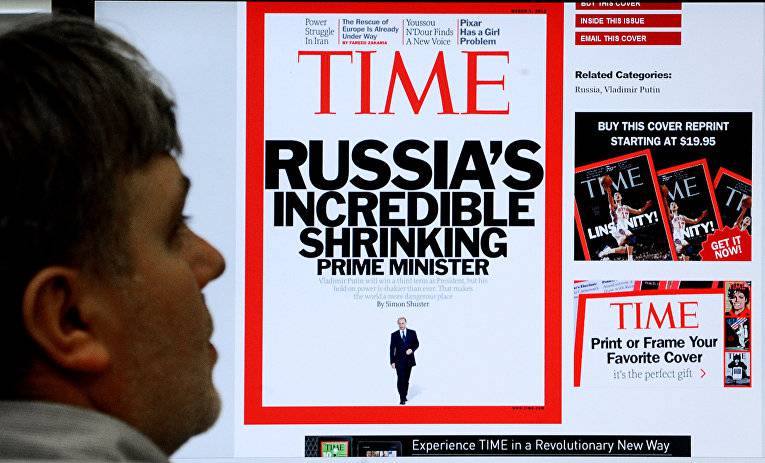 If a headline about Russia appears on the cover of a well-known Western magazine, chances are good News in the article will not be. Most likely, an international scandal occurred, geopolitical tensions intensified, hostility of the Cold War times reappeared, or the Russians conceived some other vile plot to bring the entire free world to its knees.

Russophobia, as they call the unnatural fear of Russia, forces the editors of magazines to choose right off the scale to represent Russia in the form of a backward, clumsy, anti-Western, aggressive and evil power. Unfortunately, this has become an immutable rule for anyone who is trying to create a magazine cover on the subject of Russia. These rules can be called the dark art of making anti-Russian magazine covers.

1 option. I need a Russian bear

It's very simple, and any journal editor uses this option by default. Everyone understands that the Russian bear is a symbol of Russia, and therefore it immediately attracts the attention of readers. After all, Western caricaturists have used the Russian brown bear for centuries as a symbol of imperial aggression.

Given the new round of tensions between the US and Russia because of the Ukrainian crisis, the main thing here is to make the Russian bear as terrible as possible. Take, for example, the cover of Foreign Affairs for May / June 2016 of the year. 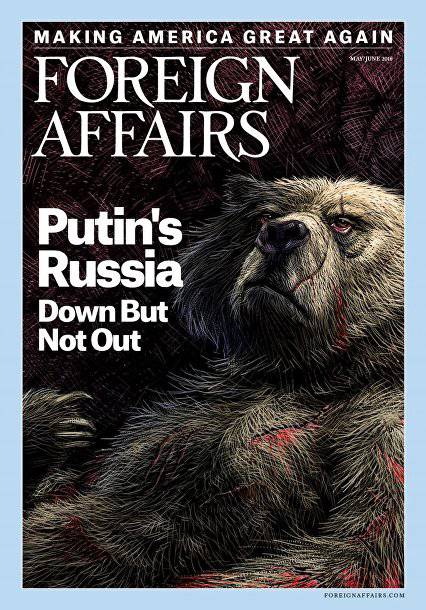 The title seems relatively harmless: "Putin's Russia is knocked down, but not knocked out." But look at the image of a bear - bloody, wounded and beaten, but still formidable. Look into his red eyes, look at his sharp fangs. Of course, with such a monster you do not want to get involved even after a few glasses of vodka.

Foreign Affairs is not the only magazine that draws a bear for the entire cover. Before the Winter Olympics in Sochi in 2014, Bloomberg BusinessWeek came out with the most terrible and menacing image of a Russian bear from among those that appeared on magazine covers. The magazine shows an angry bear on skis, in a hockey sweater of the Russian national team, armed to the teeth (literally), and accompanies this with the heading "Is Russia ready?" 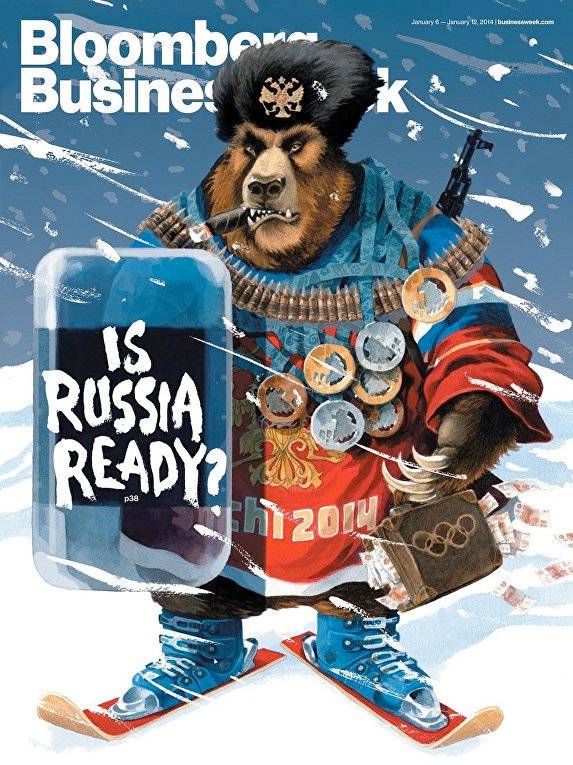 This Olympic cover immediately brings to mind the title article in TIME magazine about Russia (then it was the Soviet Union) on the eve of the 1984 Summer Olympics in Los Angeles, which was published under the title “Olympic Commotion: Why the Soviets said no”. Here is the same formidable (but a bit like a madman) Russian bear, gnawing the Olympic rings. 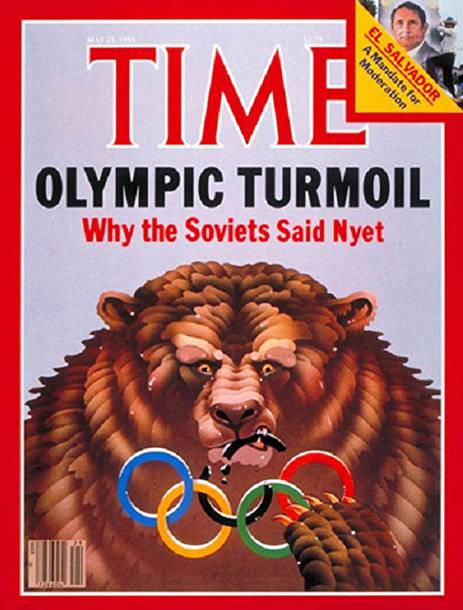 If you do not like the humanoid bear, then there are other options. At the end of 2014, The Economist broke out with an article about the “wounded Russian economy”, when the West imposed sanctions, and oil prices fell. He accompanied the article with a picture of a bear wandering through the cold Siberian snow and leaving behind traces of blood. 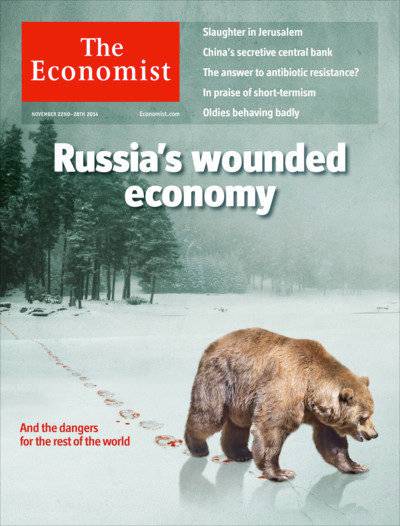 But you probably want to highlight the fangs or teeth of the Russian bear, right? So a frightening image of a Russian beast appeared, “welcoming” US President Barack Obama in Moscow. 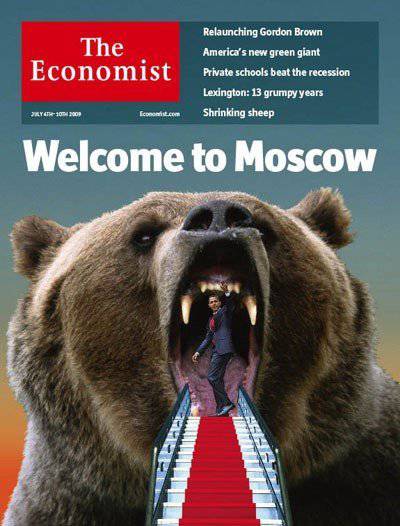 The second best option after the Russian bear is the image of Vladimir Putin. In the end, in the minds of most Western readers, Putin is Russia, and Russia is Putin.

If you are ready to go this way, then the image of the villainous James Bond, who has a devilish plot to seize the world, will be useful to you. This cover was presented to us in 2014, by Newsweek, who showed Putin in threatening sunglasses. This is just a classic. 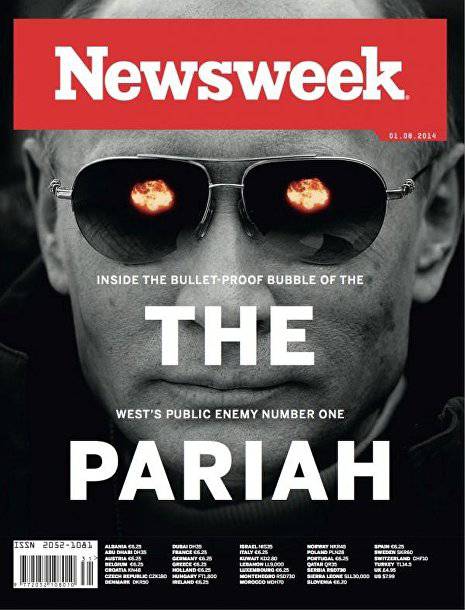 And if you want to remind the reader of the spy biography of Putin in Soviet times, you can use his image in the same sunglasses, but in the gloomy Red (Gray!) Square. 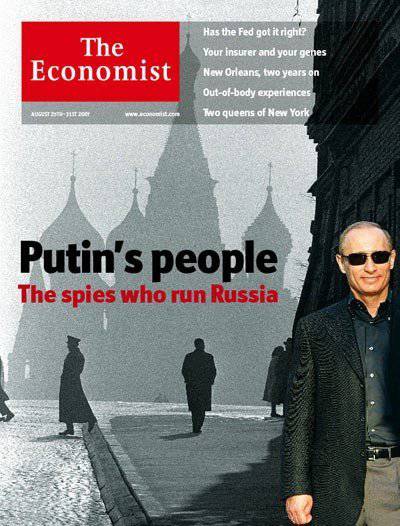 The variant of James Bond in the evil form is the classic “moody Putin”. This picture has been replicated for ten years. It somehow captures the West’s view of Russia as a vast and gloomy snow-icy and morally devastated desert. Who can rule a country like this unsmiling dictator? It all started with this cover of TIME magazine, which called Putin "Man of the Year." 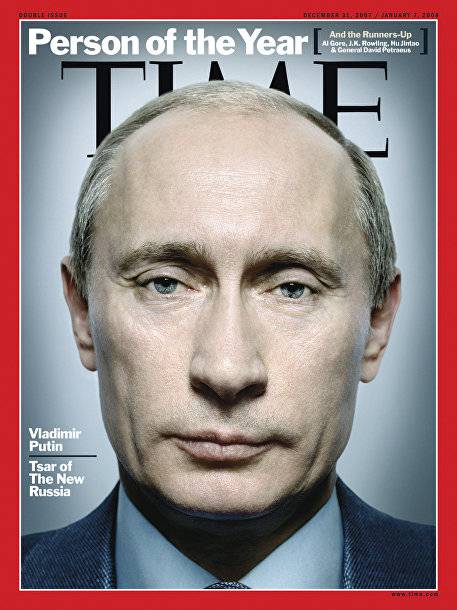 With this began the rise of the gloomy and unsmiling Putin. Take the camera away from Putin's face, put it at the right angle, and you will get what you need - the “gloomy king”.

It was such a gloomy king that appeared on 2015 on the cover of the book by Stephen Lee Myers of the New York Times. 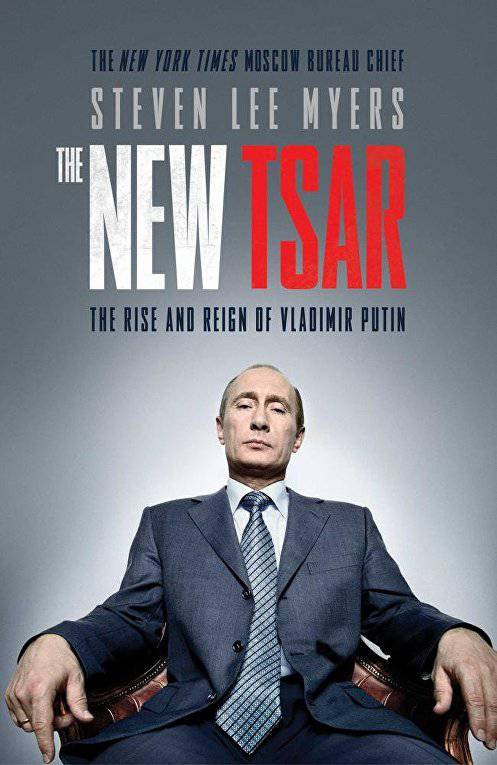 Of course, a gloomy, unsmiling and dissatisfied Putin can be slightly improved - and put it in the image of a gangster. 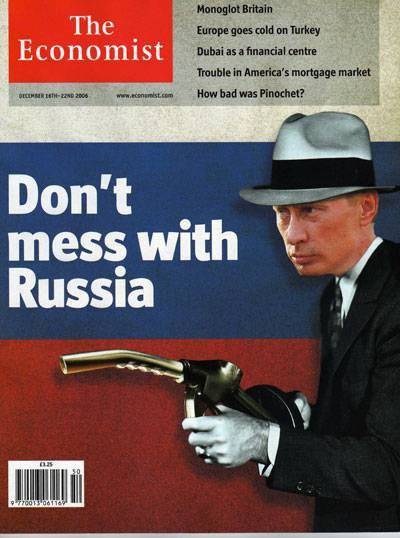 Or in the image of the mafia leader from the books of Mario Puzo. 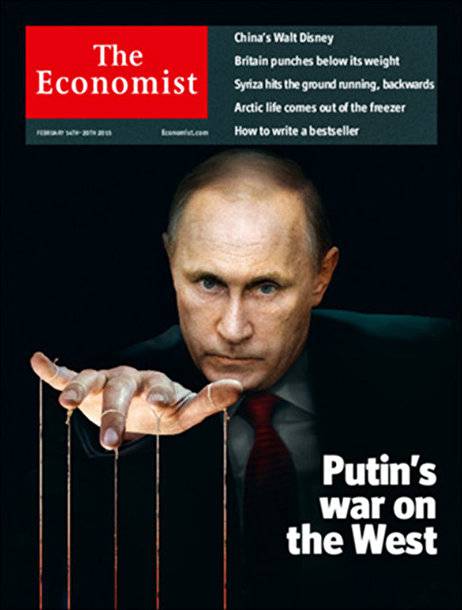 But if you really want to attract the attention of the reader, you need to take off your shirt from Putin. Undressed Putin, of course, turned into a classic Internet meme. Putin’s meme with a naked torso, engaged in a variety of things, became so popular that even “The Simpsons” during the Crimean crisis used the image of a naked Russian leader, riding on a horse without a saddle. 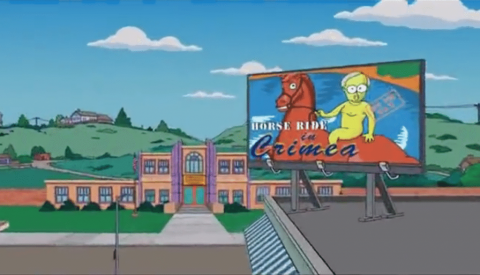 If you look closely, you will notice that with the help of Photoshop, Putin shirtless managed to appear on anything. Therefore, the appearance of a shirtless Russian leader on the covers of some leading magazines can hardly be called a surprise. Here's a classic: The Economist portrayed Putin with a naked torso on a Russian tower tank. 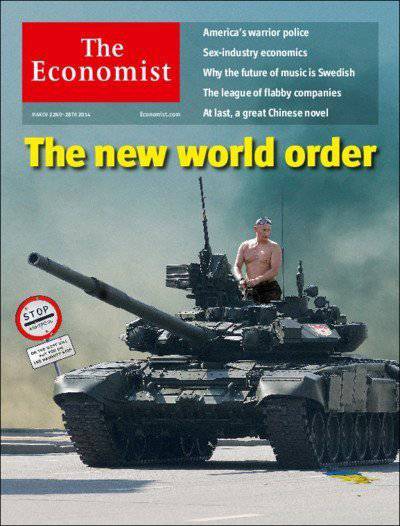 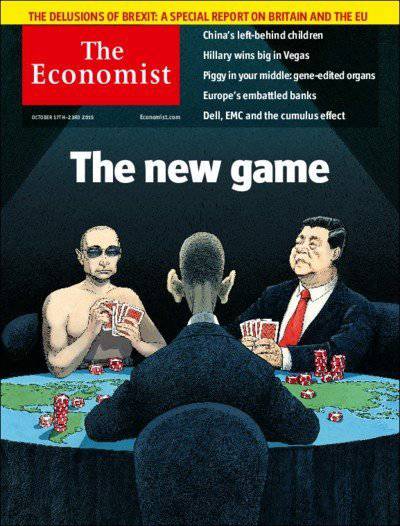 But if you need an image of Putin, and that everything looks stylish, then why not combine it with some classic symbol of Russian culture such as ballet or figure skating? In 2014, The New Yorker prepared a cover with Putin writing out pirouettes at the rink, while his obedient clones gave him the highest marks for the performance. 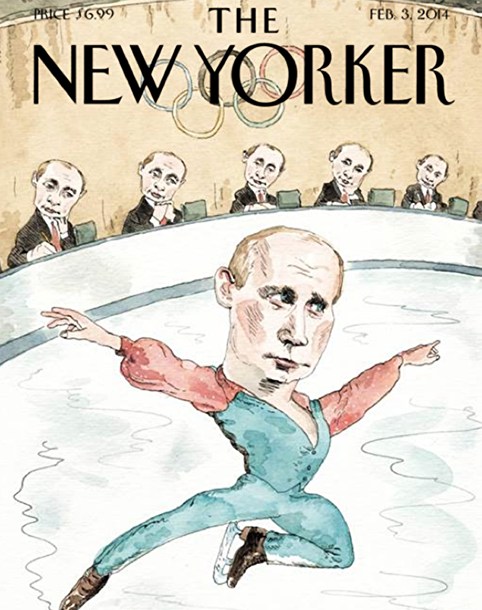 And here is another cover with Putin-figure skater, this time in The Economist magazine. 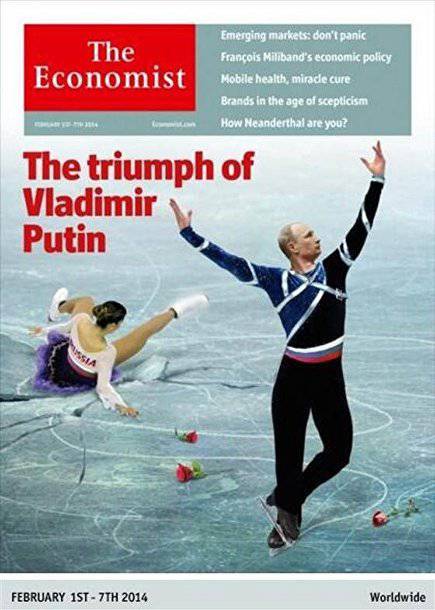 But there is one feature on this picture - notice the Russian figure skater fallen on the ice, and you will understand the hint: the Sochi Olympics is a gigantic project to satisfy Putin's vanity. (And also pay attention to the subtext. Putin usually prefers "courageous" sports and activities such as hunting, swimming or hockey, and here he looks a bit feminine in the form of a skater. Look at the hands !!!)

3 option. The classic image of Russia, but slightly distorted

If you are tired of the images of the Russian bear, and if you are worried that by placing Putin on the cover of your magazine, you defame the editorial team (Russian spies! Russian mafia !! Russian hooligans !!!), then refer to the old templates. Say matryoshka. Naturally, this conveys the mysterious character of Russia, so well described by Churchill: "This is always a mystery, more than that - a puzzle, no - a secret behind seven seals." 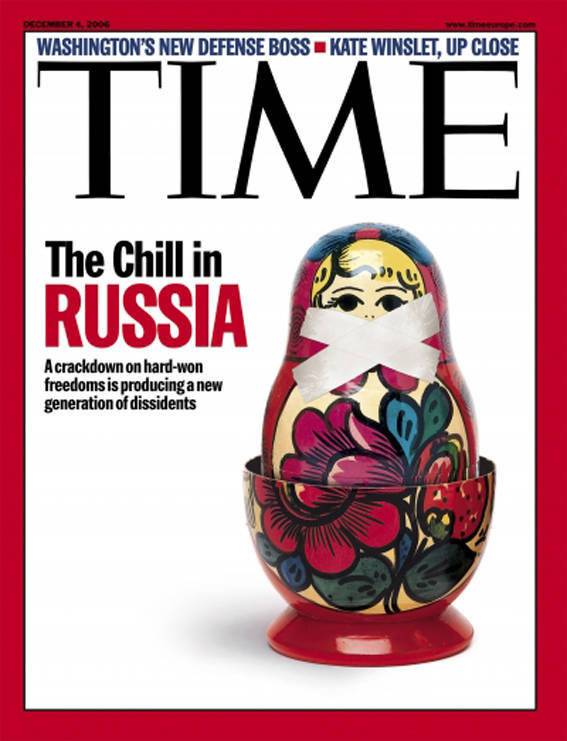 But you can go further. To show that everything relating to Russia is dangerous and scary, it is enough to depict Russian missiles, tanks, guns and soldiers. 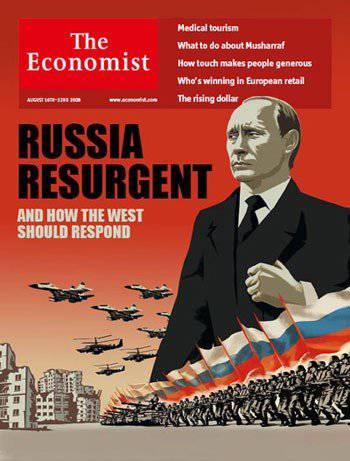 All these magazine covers combines Russophobia. They are not much different from the pictures that appeared a hundred years ago, when Russia was really a mystery to the West. In fact, the image of Russia as a large, unwieldy and aggressive state appeared in the 16th century. And since then he has not changed much.

In the Western media there has always been a feeling that a giant power in the middle of the Eurasian continent poses a threat to someone, and maybe to everyone. 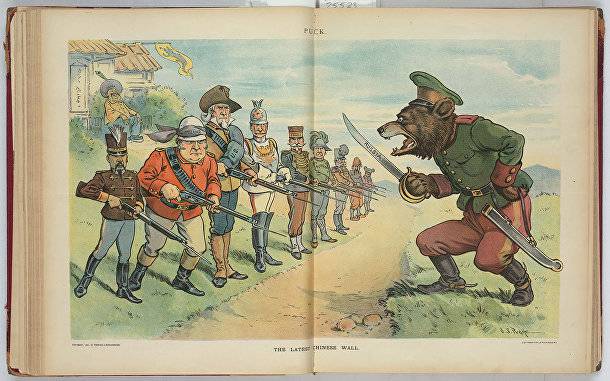 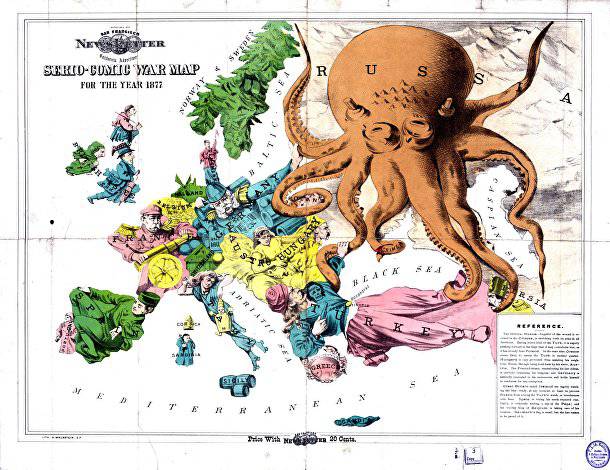 And here a completely obvious question arises: is it that these images of Russia a hundred years ago differ significantly from how the Western media present it today?

Now, when the Kremlin has demanded that the Ministry of Culture conduct a study of anti-Russian propaganda and Russophobia in the West, it is not difficult to answer this question.

Ctrl Enter
Noticed oshЫbku Highlight text and press. Ctrl + Enter
We are
Results of the week. “To sell something unnecessary, you must first buy something unnecessary, but we have no money!”Results of the week. "God forbid to see Russian revolt, senseless and merciless!"
Military Reviewin Yandex News
Military Reviewin Google News
44 comments
Information
Dear reader, to leave comments on the publication, you must sign in.