Djinn does not want back in the bottle

July 20 2016
55
Resonant terrorist attack in Nice, attempted military rebellion in Turkey, seizure of the police department building along with hostages in Yerevan, execution of law enforcement officers in Almaty with simultaneous introduction of a red level of terrorist threat by Kazakhstani authorities, a series of executions of police officers in the United States of America. All these events fit in a time interval of three to four days, causing a flurry of publications in the media about whose same hand strikes a match in certain regions of the world. And if we take into account that at the same time endless battles are taking place in Iraq and Syria, inter-clan wars continue in Libya, Yemen and Afghanistan, people are dying in Donbass, then talk about the ownership of this “hand” only intensifies its activity.


According to the established tradition, which looks like the tradition of analysis with the least resistance, American “partners” are most often accused of everything, which, it seems, is beneficial to keep the world in the conditions of growing chaos. This chaos, again, sort of like it, helps Wall Street 'money bags' divert the attention of the lenders of the American economy from the astronomical values ​​of total US debt. Although if every time after a terrorist attack or an attempt (successful or unsuccessful) of a coup d'etat in a particular country of the world, it’s about the financial reporters from Wall Street and their personal gain, then what kind of distraction can there be? Attention, on the contrary, is only concentrated, intensified, and only the lazy one does not mean that the ears of American financiers and lobbyists stick out because of the chaos in the modern world. Frankly, the conspiracy of American debt on such a background looks, to put it mildly, very doubtful.

Of course, it would be beneficial for the same financial lobbyists, and the US authorities who planted them in their current positions, so that no one of the creditors would care about the American debt, as no red-hot American press would care about anyone. But you’re concerned ... And not only creditors, but in general all those who are used to watching geopolitical events.

This hardly proves that a clearly increased interest in the activities of the United States and its allies (more often vassals) even after the news of the "Powell test tube" is a temporary phenomenon. It is unlikely, because resonant events take place too often in the world (and the frequency is only increasing), and in the presence of a huge number of media outlets and their possibilities, the concentration of public attention on these events only increases.

In this regard, it can be said that geopolitical processes and transformations have clearly embarked on a path in which it becomes either very difficult to control them, or even impossible to control them, even to those who provoked the processes themselves. Therefore, it can be assumed that humanity stands at the turn of the end of the era of so-called controlled chaos, when the same United States and its allies could afford to unleash a war with a predictable outcome. Of course, they can unleash a war not without the help of the American special services today, but only an adequate expert will not predict its outcome.

“Mental anguish” of the US leadership, the fourth since the beginning of the year, US Secretary of State John Kerry’s meeting with the Russian leadership on the state of affairs in Syria and Ukraine, statements first about the need to toughen sanctions against Russia, then - against the background of lengthy conversations with Russian President Vladimir Putin - declarations of a course on CAP partnership, confusion as to whether Asad should leave, because “he must leave”, or he must stay to help defeat Dzhebhat al-Nusru and ISIL. All this testifies to the fact that Washington is trying to follow the favorite policy of control over everything and everyone, but with each new day he is getting worse and worse.

Numerous US operations around the world are turning into operations for operations. It’s a kind of demonstration of power, which generally comes down to demonstrating, rather, powerlessness in the presence of huge resources. There is finance Tanks, fighters, aircraft carriers, wiretapping from the NSA and the CIA, but in the end everything, to put it mildly, was crumpled ... So far, this crumpledness has not yet fatally affected those who played the map of global (controlled) chaos, but subject to acceleration of current processes, it’s possible all.

Of course, there are plans by which operations begin and at first go quite successfully for their developers. But then the control often disappears, including not without the help of the fact that in a number of countries of the world they have already found an antidote against most of the paragraphs of American training manuals. And, as it turns out, the best antidote is the protection of the current constitution in that part, which deals with the norms of the change of power. And since the constitutions of the “Maidan” are, of course, not provided for, the screech of numerous human rights activists over the fact that the maydanutykh was dipped his head, excuse me, in their own shit or neutralized, is becoming less and less interesting in the current conditions.

French sociological monitoring services published the results of surveys of more than 4 thousand French citizens. The results look very interesting. Almost 84% of respondents said that they were dissatisfied with the actions of the French authorities in terms of the organization of the security system. About 58% stated that they are willing to sacrifice part of what is called European rights and freedoms, for the sake of security in the country. The 9 respondents from 10 indicated that France must declare war on terrorism first inside itself, and then fulfill the requirements within NATO overseas. It follows from this that French society does not see prospects in the policy that is being exploited by the authorities today. And this policy is the variant “neither fish nor meat, nor caftan or cassock” - the authorities do not know what to do in the conditions of a changed after the invasion of foreign states of reality. Hollande frowns, Merkel calls. She, too, frowns, also calls ... In the end: a day or two - a new message about the preparation of the attack or the attack itself. A day or two is another LIH sympathizer, or simply a newcomer from a Muslim country who is not settled in a new place, and is suffering from radicalism.

The world wants peace, but the flywheel is running. Chaos is chosen by the United States itself. The massacre in St. Bernardino and Orlando, new shots in Dallas, the shooting of police officers in Baton Rouge, the Internet threat that the black population of the country is ready to announce an analogue of the war for American independence. In most cases, the attackers are former US military personnel who were trained as cogs in a global controlled chaos car. Now these cogs are ready to become part of the new mechanism, the probability of control over which is inversely proportional to the desire of the US authorities to organize such control. The racial hatred under the color president has reached a peak in all the past decades, and the name of the town “Ferguson” has already become a common noun for the States.

Of course, you can again try to follow the path of least analytical resistance and declare that the “money bags” from Wall Street have also decided to push black and white to heaps to achieve the goal of distracting the “masses” from the debt bubble. But such logic is from the same series as the statement: “he was so afraid of murder that he shot himself” ... It’s just that there’s not enough money bag to put the genie who got out of the bottle when developing the strategy of controlled chaos . It is not enough, because the released genie today already has a lot of strength to turn the head and the financial tycoons themselves with the simultaneous opportunity to get their hands on all their assets. "Genie" is well trained, well prepared practically. He knows all the nuances that were associated with his appearance, he personally saw the very hands that rubbed the vessel in which he was located. Therefore, in order not to be hidden back, today he is ready to do everything to cut off these hands to the very shoulders. The probability of the return of control over the released “jinn” by means of the usual “rubbing of a vessel” even with regard to the declarative power of the United States looks negligible, even if the United States itself is not ready to admit this. 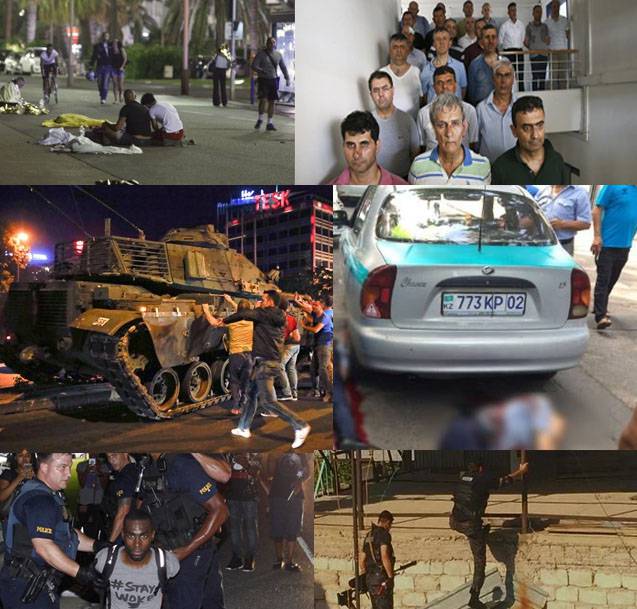 There is only one conclusion: the sown wind will reap the whirlwind. This biblical truth lives in centuries and constantly finds practical confirmation.

Against this background, the question of whether there is in our world a force capable of driving a genie back into a bottle, and those who deliberately released it from there, teach the lesson of responsibility for the committed acts is relevant.

Ctrl Enter
Noticed oshЫbku Highlight text and press. Ctrl + Enter
We are
Police cut. Who will keep order?Situational analysis of the death of the MH17 flight (Malaysian Boeing 777), made on the basis of engineering analysis from 15.08.2014
Military Reviewin Yandex News
Military Reviewin Google News
55 comments
Information
Dear reader, to leave comments on the publication, you must sign in.