July 19 2016
115
Two years ago, against the background of the reunification of Crimea with Russia in the media, the topic was acutely relevant: “And on what basis did the Crimean Peninsula be transferred to the Ukrainian SSR in 1954 year from the RSFSR?” But historians tried to answer this question broke spears, teeth, and in general all that could be broken, and up to 2014 year. For obvious reasons, attempts to give an unequivocal answer to this difficult question led to the mention of the name of N. S. Khrushchev, and this (as if official) motivation for the transfer of the Crimean peninsula to Ukraine was the main discussion:

(...) given the commonality of the economy, territorial proximity and close economic and cultural ties between the Crimean region and the Ukrainian SSR.

It was these notorious “commonality” and “territorial proximity” that became the stumbling block when discussing such a delicate issue. There were and still are specialists (or “specialists”) who call the Khrushchev's step sound and reasonable. They say that after the Great Patriotic War, the Crimean peninsula was in a deplorable state, and only, you know, under the jurisdiction of the Ukrainian SSR, necessary restoration work could be carried out in a relatively short time to turn the Crimea into an all-union health resort. Why the same work could not be carried out under the jurisdiction of the RSFSR? - arguments are either not cited at all, or they look, to put it mildly, implausible.

Against this background, with all the heat of the discussion of the Crimean issue from 1954, it can be considered a somewhat strange fact that the discussion of the transfer of the Ukrainian SSR to other Russian territories in the Soviet Union’s existence format is practically not conducted. As if the Crimea is the only territory, which at one time was cut off from the RSFSR and transferred to the Ukrainian "use".

Of course, such an approach to the discussion can be understood, if only because the issue of Crimea has significant resonance because of its return to the bosom of Russia. But other territories are still under the "Maidan patronage."

But is this the reason to forget about the strange kind of administrative-territorial decisions of the Soviet authorities, taken in addition to the decision on the Crimea? Not at all trying to justify Khrushchev in terms of his "Crimean" idea, this man acted only as a continuer of the entire campaign for the compilation of the mosaic of the Ukrainian SSR from the territories of various Soviet republics. The first steps of this very powerful campaign began in fact from the very first days of the existence of the Ukrainian SSR itself, which was born thanks to the fact that other republics partially lost their lands and, as a result, their population. It was Russia that lost the most.

This material deals with the facts of the transfer of the lands of the Kursk Region (RSFSR) to the Ukrainian SSR in the 20s of the last century.

Below you can see a map of the Kursk region, telling about the dates of the establishment of Soviet power in this region of Russia. However, in this situation, the map presented in the exposition of one of the regional museums of the Kursk region is published in the Military Review not to demonstrate how Soviet power walked along the nightingale. An interesting map of the outlines of the Kursk region in 1917-1918 years. And in these outlines there are not only several large areas of the present Belgorod region (including Belgorod itself), but also, which is much more significant in the context of the material, the territories that are now part of Ukraine. As an example - Putivl district, the administrative center of which, as you know, is mentioned in the “Word about the regiment of Igor”. 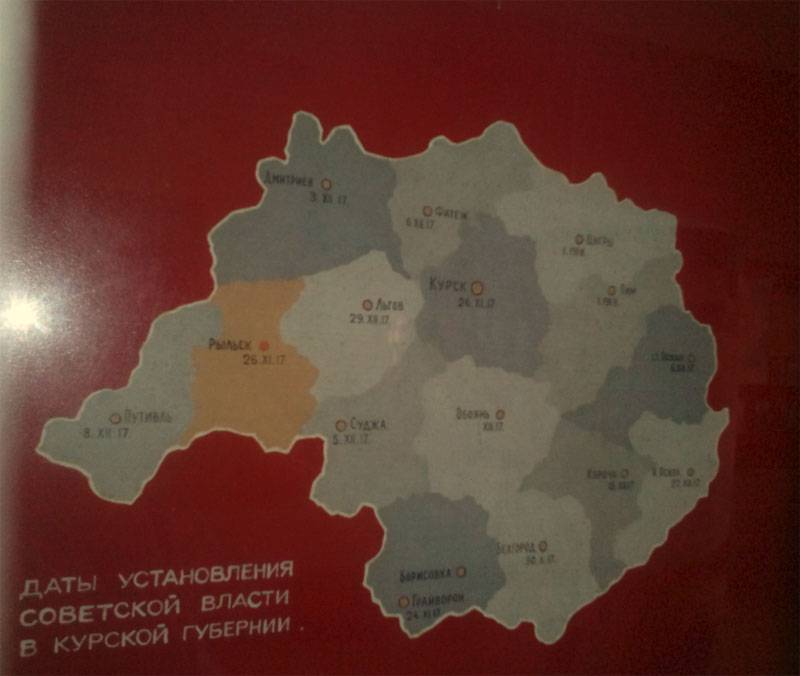 Judging by the “logic” of the transfer of Crimea to Ukraine in 1954, the transfer of Putivl and some other Kursk territories from the RSFSR to the Ukrainian SSR in the twenties should also be justified by “territorial proximity”, “commonality of the economy” and “cultural ties”. If so, then it is surprising that after the stroke of the pen of the then Moscow leaders, Ukraine didn’t withdraw all the regions of the RSFSR that belonged to its territory (if it makes sense at the time of the 20-s of the last century) to speak about the "Ukrainian" territories itself. It is strange that "little things" areas ... 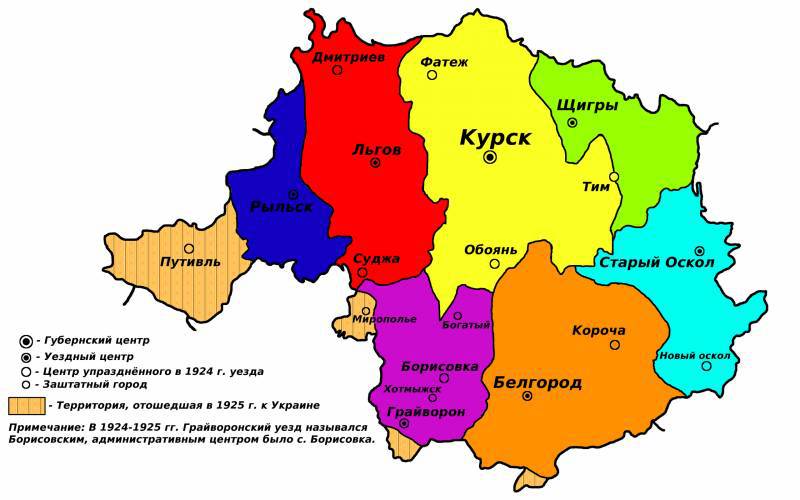 So Khrushchev in 1954, it must have seemed that the gifts in the form of Putivl, Miropolya and the environs of Grayvoron are too small, and therefore the whole Crimean region went into action together with the population, whose opinion (and not only the Crimean) at that time it was not accepted to be interested ...

Denoting the fact that the Putivl lands with one stroke of the pen of the Soviet party leaders in the 20-ies had departed the Ukrainian SSR, the question arose as to what is being said about this in Putyvl itself, which was de jure not “Ukrainian” since its foundation in the X century. Considering that Maidan hysteria, which Ukraine is sick today, it was possible to assume that they had time to rewrite it in Putivl history, deleting from it any mention of Putivl as a Russian city. However, surprisingly, this is not yet the case. On the official site of Putyvl city council (City Council) from the history of the ancient Russian city decided not to do (or did not have time yet) Maidannaya ridicule, and presented all the historical facts with surprising (for today's Ukraine) objectivity.

From the history of Putyvl, published on the mentioned web resource:
In 1500, the Seversky Prince Vasily Shemyak, to whom the Putivl lands were subordinate, went over to the side of the great Moscow Prince Ivan III. So Putivl was in the Moscow State.

In the 16th-17th centuries, the city was the most important defensive outpost on the southern borders of Russia, included in the system of cross-border borders that the Moscow state built to protect against invasions of the Tatars, Turks and other southern peoples.

In the XVII century Putivl - one of the largest cities in Russia. By the size of the territory and population, it exceeded such large cities of the time as Pskov, Smolensk, Chernihiv.

In the 17th century, Putivl played extremely important role in Ukraine’s relations with Russia. Ukrainian hetmans entered into diplomatic relations with Moscow through the mediation of the Putivl governor. During the Liberation War of the Ukrainian people 1648-1657. Under the leadership of Bogdan Khmelnitsky Putivl was the main center through which Russian government provided military and economic assistance to the Ukrainian people.

In November-December 1653 in Putivl was located the Russian embassy headed by boyar V.V. Buturlin. The embassy met Putivl voivod S. Pushkin - the ancestor of the famous poet. The embassy left Putivl for Pereyaslav, where on January 8 1654 was taken historic decision to reunite Ukraine with Russia.

Apogee:
Putivl land keeps the roots of Russian and Ukrainian culturebeing a link between two fraternal peoples and states.

On the basis of the above lines, a shy hope emerges that not all representatives of the local Ukrainian authorities since February 2014 have been in a dope of burning tires in Kiev ... Or everything is much more commonplace - and to the page about the history of Putivl on the official site of the City Council Maidan "elite" have not yet reached out? I would like to hope for the first, and therefore the Putivl authorities can say THANK YOU for preserving historical truth.

However, under the pressure of the Sumy governor in February, the 2016 in February in Putyvl nevertheless dismantled the monument to Lenin, apparently in order to correspond to the general (and in the direct and figurative sense) “decommunization”. True, the monument has not yet been demolished, but delivered to the Spadshchansky memorial complex (at least, the authorities of Sumy region said so). To put it simply, the “Lenin” was taken to the forest, where it was abandoned.

By the way, when transferring Putivl district in 1925-1926. The composition of the Ukrainian SSR must take into account one important detail. On the basis of archival documents, the transfer of the region to Ukraine by the SSR was carried out on the condition that the region receives the status of Russian national autonomy within the republic (including several more such regions). This autonomy existed until the second half of the 30-s, after which the then party members of the Ukrainian SSR decided to abolish Russian national autonomies, which was declaratively represented as a step towards “rapprochement of the Russian and Ukrainian peoples”.

For your information:
From 1920 to 1928, over 500 settlements (cities, villages, villages) of Kursk, Bryansk and Voronezh regions, the territory of the so-called Don Army, as well as several districts of the Gomel region, which were part of the RSFSR for the year, were transferred to the USSR.

Ctrl Enter
Noticed oshЫbku Highlight text and press. Ctrl + Enter
We are
Energy blockade of the Crimea. Great damage to the economy and an attempt to genocide the populationRussia, Turkey and the "Crimean Question"
Military Reviewin Yandex News
Military Reviewin Google News
115 comments
Information
Dear reader, to leave comments on the publication, you must sign in.