Notes of the Colorado Cockroach. From heaven to earth ... Thank you for not under ...

July 19 2016
36
Greetings to you, my dear friends! And you, dear opponents. I especially welcome those for whom I am "terra incognito." Here I sit and think, am I a brand or a trend? 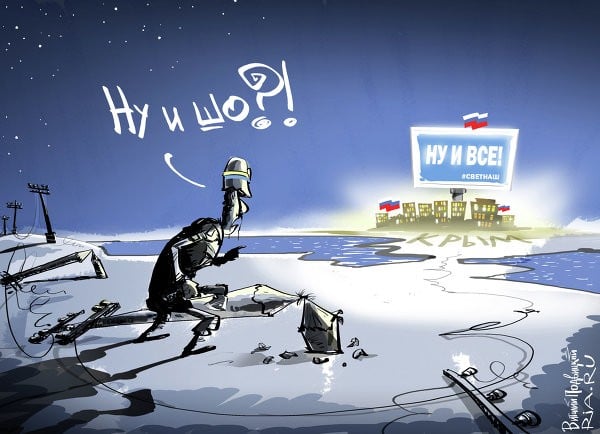 Do you know when thoughts about brand-brand appeared? After the last publication. It turned out that the main thing in my notes is that they are "Notes ..." And I, by a sinful deed, thought my great thoughts. Thanks to the readers. Lowered to the sinful earth.

Everything is exactly as it happens with my country. Only not the readers, but the "allies" and the owners are omitted. In some matters - on the ground. In some - already under the ground. And most importantly, we can not do anything. Loop thrown over! Any movement to the side causes a steady feeling of pain.

Ukraine today reminds of the pig that was brought to the slaughterhouse. In the corridor pushed, and ... You can not stop. The rear are pushing. And in front of terrible electro. Those that carry death. Resting, but to sense? Not difficult to get to the next world. It is difficult to return from there.

Those who shouted to us about our happiness of becoming democrats are now reaping the fruits of their democracy. Terrible fruit. Bloody. This week has been quite difficult for the world. The world has got used to the Ukrainian deaths, even children's ones. This is not people. These are Ukrainians. But to his, "human", was not ready.

France and Turkey followed in mourning colors. Woe ... And we also sympathize with this woe. Sympathize, but in my heart some kind of nasty animal scrapes. You have death grief, and we have?

Okay. International relations and other political events are not my brand. Long away. And the cockroaches are not particularly concerned. And you can read about all this from other authors. I, as a person close to the ground (in the literal sense, legs are short), will talk about our country.

The main thing about which they write little, but, as in my brain, is a rather serious event, it is the replacement of a sufficiently large number of managers in the prosecutor’s offices and special services in the field.

"President Petro Poroshenko made a number of personnel changes in the head office of the Security Service of Ukraine. He signed the relevant decrees on July 16, the press service of the head of state reports.

In addition, the head of state appointed Eduard Krytsin head of the SBU Directorate in the Kharkiv region, having previously dismissed him from the post of head of the Department of Counterintelligence Protection of State Interests in the Information Security sphere of the SBU. Cricin replaced Alexander Pivovar at the new post.

The president also appointed Oleg Zubkov head of the SBU Directorate in the Kherson region, dismissing Dmitry Yarmak from this position. ”

The same happens with prosecutors. Regional prosecutors "fly off" from their homes, like leaves from trees in the fall. Breeze and all the land in the foliage. Well, and, accordingly, about the district and say nothing. This is what our Lutsenko said in the Ternopil region when appointing-dismissing prosecutors.

What's happening? Why such cleansing in power structures? The power of sight? See corruption? Saw the work of the prosecutor's office and the courts? Saw the fraud and "Yezhovshchina" in the SBU? Or really decided to "fight corruption"?

No, Poroshenko is likened to an ancient hero, who cleaned Augean stables, for a completely different reason. Our "Heracles" makes the same as the ancient prototype. He decided to completely change the format of power. Remember in the old stories about the feat of Hercules than the end? Hercules washed the stables, but did not receive the promised tenth of the herds. Well, he killed the whole race Avgiya. Left one. The one who betrayed his father and took the side of Hercules.

I don't want to be a prophet, but ... You know, sometimes I wonder why God gave the cockroaches so many opportunities to see, hear, understand? Nor are we completely religious. We have no church. And he answered the same. To myself. And words from the Bible. We are created in the image and likeness of God. And we act the same way. Do not prevent people from doing stupid things. Everyone has the right to choose. Interestingly, the "old" power chiefs what fate shines?

A little bit about the "belly". Honestly, tired of writing about tariffs, prices and so on. And you probably got tired of reading about it. We have today in the "head" (and we have long turned the country upside down, it means our head today is where the legs are!) An incomprehensible solitaire has developed for you. In Ukraine today, “revolt against the government and society” means thinking, understanding, telling the truth, reading books, playing sports, being educated.

For almost a year, we have been fulfilling what the IMF requires. For almost a year, the authorities tell us that nothing is left. All done! And now ... The long-awaited money from the next tranche will fall on the heads of Ukrainians. And do not fall down.

After each meeting of our “heads” with representatives of the IMF for some reason, it turns out that we didn’t finish something. So today, Christine Lagarde found another "deficiencies".

"There are several unresolved technical issues within the framework of the commitments made by Ukraine, which we discussed together. They need to be resolved, because we cannot have a half-completed program and hope that it will work. The work should be completed and we are hopeful that Petro Poroshenko and the Prime Minister will heed this in order to fulfill the latest requirements that Ukraine must fulfill "

Do you know what we "did not finish"? Do not believe it, but we ... did not return the debt of the Russian Federation! Those same 3 billion with decent "pennies", which proudly "decided not to pay the aggressor." How many tridents were pierced on the breasts, how many fences were painted in patriotic colors, how many Russians in social networks received a “fig and oil” from us. So what? Money must be returned ...

And where to get them? The IMF does not give. ICBM does not give. EU does not give. You see, everyone has their own problems. They do not want to help the "outpost of the struggle against Russian aggression in Europe." As a great effort, we were given this week a decision by Canada to allocate 30 million dollars. A few dozen cents on the Ukrainian face face. But Peremoga!

Yes, and an interesting idea in my head spinning. We donate the unclear 3 billion from Russia, and we get the next tranche of 1 billion from the IMF. Well, the logical construction of Madame Lagarde is incomprehensible to the cockroach. Any sane person knows the simple truth. Do something voluntarily today (and I hope the aid at the beginning of the Maidan was voluntary) twice - for the third time you will be expected to do this, and for the fourth time - to demand it. We already require!

Once again, the characters from Azov "lit up". And once again, the SBU opened the "paw of the Kremlin." Who does not know - I will tell.

On Friday, unidentified masked men attacked a cash collector in the Zaporozhye region. Attacked in the style of "activists". A lot of shooting, a lot of grenades. But stumbled upon the resistance of the security forces. Moreover, one of the attackers was shot, two were taken as wounded, and one in general was caught. Took the crooks into circulation and ... Guys, from Azov!

The reader has a reasonable question: does Russia have something to do with it? What is the fault of the Kremlin? Well, you do not understand our Ukrainian logic. He died one of the prisoners. Of those who were wounded. And he is a citizen of Russia! Now it is clear? It is the Kremlin that deliberately sends its citizens to the punishers in order to destabilize the situation! True, he refused Russian citizenship. And as a hero of the ATO recently received Ukrainian. But these details are not particularly important.

The authorities are seriously afraid of "Azov". Afraid and trying to "clean up". Judging by the way the operation was carried out to prevent the robbery, the people of Azov were “waged” and knew about the attack. Beletsky already turned blue with indignation.

And if you add the statements of some deputies, like Parasyuk, on television, a rather sad picture for the punishers emerges.

"The fact that we have such forces (capable of carrying out a coup d'état. - Ed.) Is a fact. I can say that there were a lot more of them in 14, now, probably, only one is left - this is my colleague Parliament, which created the battalion "Azov". This is quite a powerful, structured and primarily ideological organization that is capable of such. Whether they will go for it, I can not answer, unfortunately, it depends on their ambitions, their vision " .

“There is also the Right Sector, which is now going through an information war and which is being discredited every day. The PS has opportunities, this is a possible option, but they do not have a centralized supply of resources like Azov’s.

Yes, my smart grandfather was right! Life will put everything in its place. And some also stick ... I you, granddaughters, I teach that where you should go. And where should not and you get yourself.

And I’ll finish my sad notes today with the same things I started. What is happening in the world today is a logical outcome of the policy of “civilized” countries with regard to “subhumans”. Ukraine is just a continuation ... Continuation of the slaughter in Africa, in Asia ... Continuation and warning! Ukrainian blood, the one that the Europeans tried to ignore, was hauled into them by terrorist acts in European cities. I won’t be surprised when I see Berliners or Warsaws jumping. When I see fences painted in national colors in France or Spain. This is only the beginning ... The beginning of the coming European retribution ...

This is not done by Ukrainians, thank God. Our "fighters" are busy today fighting with their people. But blood always produces blood. Quote from the Old Testament (Ecclesiastes, 3):

And to you, dear and beloved my readers, happiness and love in the house, a peaceful sky, good neighbors and smart rulers. I'll tell you one anecdotal case. I myself have not seen. So, claims not to me.

Desired one lady in the toilet. The case is simple, natural. Only in our cities is difficult to do. And here is the restaurant. And there is a guard. Mordovorot sort of. I will not let you go, and that's it. VIP person with us. Sign in 100 dollars. But the lady was not easy. She offered after the fulfillment of her desire to show a beautiful chest.

Complete all procedures in the toilet. Is returning. And the guard is already waiting. Show me. And what do you think, unbuttons a lady's blouse ... and there is a T-shirt with a photo of one leader of a great country riding a bear. And with a naked torso. Showed the chest!

At this note today, I finish and go to the kitchen to praise Tarakanushkina cooking. What you want.

Ctrl Enter
Noticed oshЫbku Highlight text and press. Ctrl + Enter
We are
Notes of the Colorado Cockroach. Between Christmas and Baptism ... chillyNotes of the Colorado Cockroach. Part of 14. Tse Europe!
Military Reviewin Yandex News
Military Reviewin Google News
36 comments
Information
Dear reader, to leave comments on the publication, you must sign in.