Still, the party was the guiding force of military construction

July 16 2016
35
Throughout the entire period of existence of the Soviet Union, the Communist Party was the leading and guiding force of Soviet society, the core of the country's political system, which was also reflected in the Constitution of our state.

The political system that existed in the Soviet Union can be treated differently, but the most important role of the Central Committee in all the victories and troubles of our people throughout almost the entire twentieth century remains indisputable. 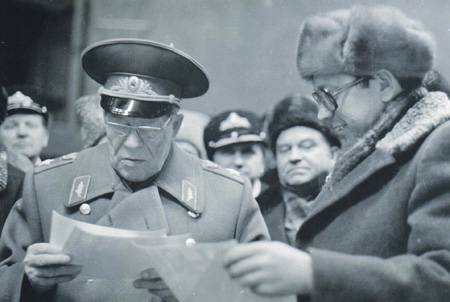 The role of the Party Central Committee in the construction of the domestic fleet It should be considered as one of the components of its activity to strengthen the country's defense capability, develop and improve its Armed forces.

The growth of threats to the existence of our Fatherland after the end of the Second World War due to the growing scale of the Cold War and the intensity of armaments of the capitalist powers in the hope of achieving military superiority grew steadily. All this necessitated a sharp increase in our attention to the creation of forces and means capable of withstanding the military threat and ensuring reliable defense and defense of the country.

In fact, during this period there was a revolution in military affairs, and this is a multilateral process that embraced both opposing social systems. Moreover, the USSR and its allies in the beginning of the revolutionary military-technical process were in the role of catch-up.

In the period of 1958 – 1968, being an instructor of a department, and then an inspector of the Central Committee of the CPSU, I know the work of the department for direct participation in it. I will not dwell on the presentation of the forms and methods of the work done, I can say that it was held in close contact with the teams of design and research organizations, manufacturing enterprises, the apparatus of state organizations managing the military-industrial complex of the country, as well as representatives of the general customer of military equipment - The USSR Ministry of Defense, first of all, certain types of Armed Forces, including the Navy.

The most well-trained defense workers with practical experience and knowledge were attracted to work in the Department of Defense Industry of the Central Committee of the CPSU throughout the entire period of its existence up to 1991. And I must say that they successfully coped with their work, because the result of the activities of the military-industrial complex of the country was the achievement by the beginning of the 70s of a certain parity in armament issues with the United States and the NATO bloc countries. This gave grounds for signing, after lengthy negotiations between the USSR and the United States, the Anti-Ballistic Missile Treaty and the Interim Agreement on the Restriction of Strategic Offensive Arms (SALT-1), held in 1971 year. The forces included in this agreement included the naval forces, which required great efforts to ensure the fulfillment of the decision made by the shipbuilders, their contractors and sailors and assistance in forthcoming work from the CPSU Central Committee, and above all the employees of the Defense Industry Department. .

Recalling the employees of the department dealing with military shipbuilding, I would like to mention Polushkina FF, Vashantseva V.I., Luzhina N.M., Koksanova I.V., Skurikhina A.D. and a number of others. All of them were specialists of high level of knowledge, the greatest working capacity, who gave all their strength to the solution of the tasks set.

And in this regard, I cannot again mention the name of Dmitry Fedorovich Ustinov, whom I had known for about 30 years, and the last 16 years of his life served as an assistant first as secretary of the CPSU Central Committee, and then as USSR Minister of Defense.

His whole life was associated with the strengthening of the economic power and defense of the Soviet Union. He was the main head of rocket production in our country, the conquest of space, the creation of an air defense system, an atomic rocket-carrying Navy. He knew how to listen and hear the opinions of eminent scientists and ordinary workers, general designers and simple engineers, military commanders and soldiers, knew and loved to learn, learn new things, feel free to ask questions if something remained incomprehensible or not sufficiently explained to him.

In my memory, there was a well-preserved case when, when visiting the Baltic Shipbuilding Plant in Leningrad, Dmitry Fedorovich spent almost two hours talking in the ship shaft processing workshop with an outstanding specialist turner, twice Hero of Socialist Labor A.V. Chuyev. Despite the fact that it was already long after midnight, they still could not part: one told about the complexity and nature of the work on processing shafts, and the other absorbed the lessons and features of working skills.

Any question df Ustinov was engaged not amateurishly, but with a great desire and desire to penetrate into its essence, to see the prospect of implementation and the possibility of using and applying one or another new type of weapon or system, to feel what place they can take in ensuring the country's defense, strengthen its combat readiness and power. . When discussing any problems, he did not tolerate talkers who judged superficially on the topics under consideration, admitting a dispute - an active, demonstrative dispute, and did not hesitate if the arguments of the opposite side that were really correct and even contradictory to his original thoughts were accepted.

Dmitry Fedorovich considered the greatest evil in a man to be lies, deception and servility. He could openly and honestly say that you did not know the answer to some question that followed unexpectedly on his part that he was not acquainted with him or did not have time to figure it out. What was always followed by a calm indication: “Well, go find out, figure it out, find out everything you need, and then come and make a decision.” After all, on the basis of the reports or communications made, Ustinov had to make the most responsible decision, whether on technical, military, economic or social problems. And the cost of mistakes when making such a decision was incredibly high.

On the example of D.F. Ustinov I wanted to show the role, style and methods of leadership of the Central Committee of the CPSU in matters of strengthening the country's defense, including the development of our Navy. Often, when he was in the Northern and Baltic fleets, in the Far East and the Black Sea, he was deeply and thoroughly acquainted with the problems and issues of concern to seamen. The result of his stay in the fleets was the adoption of measures to replenish them with new ships, develop the ship repair base and coastal infrastructure, including not only the issues of the ships basing, but also improving the living conditions of sailors' families, building schools, shops, cultural objects.

The subject of constant attention df. Ustinova was the work of design offices, research institutes, production teams of the military-industrial complex of the country. Practically, this was done by methods of monitoring the implementation of the decisions taken and the development of specific measures for the development and implementation of the tasks facing the organizations of the military-industrial complex at meetings and meetings with the Secretary of the CPSU Central Committee. This was preceded, as a rule, by the study of questions by employees of the Defense Industry Department with the subsequent submission of proposals for solving the problems and issues under consideration.

This procedure and methods of work of the Central Committee of the CPSU also dealt with shipbuilding issues. The course of design, the search for the best methods of building ships, acquaintance and study of unusual methods of navigation of sea and river ships, as well as work on the creation of ship mechanisms, weapons for various purposes, ship equipment - such is the amount of activity that is far from complete, which was the subject of interest and practical achievements results of the Secretary of the CPSU Central Committee D.F. Ustinov. And it must be emphasized that such questions remained extremely important, to which he showed great interest, and when he became Minister of Defense of the USSR, being at the same time a member of the Politburo of the Central Committee of the CPSU.

It should be noted that the creative and active focus and dedication in the work of the Department of Defense Industry of the Central Committee of the CPSU in strengthening the Armed Forces of the Soviet state, established by D.F. Ustinov, was successfully continued by his successors as secretary of the CPSU Central Committee, Ya.P. Ryabov, G.V. Romanovs, and then L.N. Zaykov.

In conclusion I want to say that while the Soviet political system was headed by people loyal to the communist idea, it remained stable. The loss of deep conviction that the Communist ideals of the new generation of Communist Party leaders Gorbachev, Shevardnadze, Yakovlev, Yeltsin and others, who grew up in stable post-war conditions and made a political career in 60 – 70's, but did not acquire the ideological conviction of their predecessors, led to a distortion of the principle formation of the party and state apparatus, the substitution of values ​​of public and private life, and ultimately to the collapse of the Communist Party as the leading and guiding force state and the change of the socio-political system of the Soviet Union, which led to the collapse of the state - the USSR and the life tragedy of millions of people.