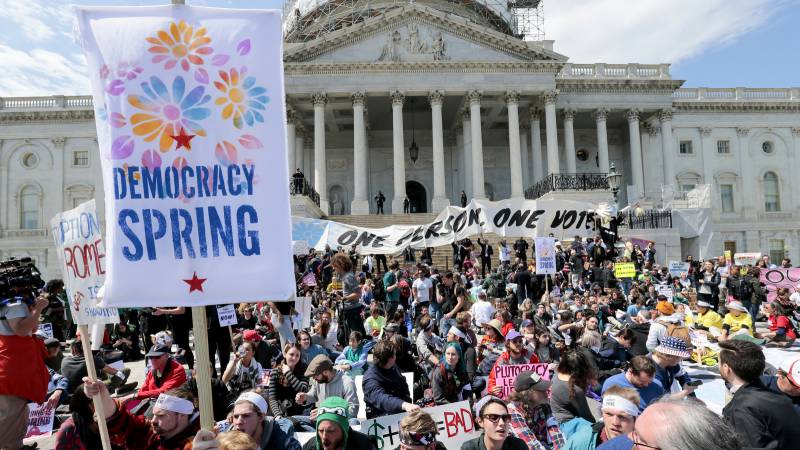 The presidential race in the United States is entering a crucial stage. But the opposition of big capital and broad masses dissatisfied with the absolute power of Wall Street, so acutely manifested during the election campaign, did not disappear anywhere and turned into the reality of American public life.

The extremely specific nature of American democracy is a truism, which, even through clenched teeth, even liberal advocates are forced to admit. To be more precise, the United States never knew any democracy in the meaning of the people's power. Since its appearance on the world map, the United States has been a country where undivided power belonged to large owners. Democratic procedures have always been used by them only as a “soft bridle” for the population. But stronger than this bridle, as shown by more than two hundred years of American stories, there is no country in the world.

Up to now, the US electoral system is neither direct nor fair. Here there are hundreds of barriers that prevent the entry of unwanted persons into the higher echelons of power. This was fully proven by the current election campaign. A few months ago it might have seemed that the monolithic political system of the United States cracked. The unexpected success of two candidates not connected with the establishment of the leading parties gave rise to the illusion of its democratization, but this illusion is gradually dissipating.

The phenomenal breakthrough of Sanders and Trump is caused by a number of processes, the main of which is progressive social stratification. 90 percent of US citizens own only 23 percent of national wealth, and according to this indicator, the country is increasingly rolling back to the era that preceded the Great Depression and the "New Deal" by Franklin Roosevelt.

The hegemony of the largest corporations, which cannot be disguised with democratic tricks, is becoming ever more frank. A vivid example was the scandal surrounding the lectures of Hillary Clinton in front of the leadership of the financial "monster" Goldman Sachs. And the point is not only that the ex-Secretary of State received a 675 fee of thousands of dollars (the average American's income for 14 years) for them, but also the content of her speeches. Clinton herself categorically refused to make them public, however, the confessions of the participants of these mysterious meetings penetrated the press. According to them, the meetings discussed the access of financiers to budget funds if Clinton was elected president. Under these conditions, the amount of remuneration seems quite logical - by the way, only a small fraction of the fact that they donated “business sharks” to her election campaign.

Most of the other candidates for the highest state office were exactly the same puppets of corporations. This resulted in a protest vote on the primaries and caucuses. The total number of US citizens who cast their votes to Trump and Sanders has exceeded 26 millions.

But between these applicants there is a fundamental difference. If Sanders is the left (of course, in the Western sense of the term) answer to the crisis of public consciousness, then Trump is right-populist. Unfortunately, the majority of pro-government Russian media mold Trump almost a pro-Russian politician, choosing from the whole mass of his statements the little that can be fastened in half to this dubious version. In fact, Trump is a typical representative of big business and is not going to question his absolute power. Just the opposite: Trump stands for minimal government intervention in business affairs. This principle underlay the social and economic policy of 1980, known as "Reaganomics."

By the way, it is Reagan that Donald Trump considers a role model. This fact deserves special attention, especially since historical analogies suggest themselves. Former actor Reagan was once considered by few as a serious politician, and his scandalous statements were not inferior to Trampovsky. Their programs also have a lot in common, so you can guess what Trump's promises can turn into. The tax burden on big business under Reagan has weakened considerably, while the minimum wage has not been raised even once. The consequence was the deepening of social stratification, the number of poor Americans increased to 32 millions. Social programs in 1980-e folded one after another, the government sharply limited the rights of trade unions. Fame was the statement of Reagan, who called poverty and vagrancy "the personal choice of man."

In foreign policy, Trump also focuses on the experience of Reagan. Calls to return to the United States the status of a "great and strong country" as if taken from the arsenal of the early 1980's. “Our military dominance must be unconditional and indisputable, recognized by all,” Trump says. His statement that the USA “saved the world twice” is no less characteristic: “In 40, we defeated the Nazis and the Japanese, and then saved it again, having won a great victory in the Cold War.”

As for trump’s criticism of military adventures in Libya and Syria, as well as his individual statements about partnership with Putin, their sole purpose was to attract an electorate dissatisfied with Obama’s foreign policy. To date, these statements have given way to a completely different. Now, Trump calls for the Russian fighters to be shot down while approaching US ships, speaks of "a huge threat to China," promises to tighten policies towards Iran and North Korea, and does not tire of repeating support for "our great friend, Israel."

Having managed to masterfully play on Americans' dissatisfaction with the government’s domestic and foreign policy, Trump served well the "kings of Wall Street". It is useful to recall in this connection that in the face of the threat of losing power, big business always resorts to the services of right-wing forces exploiting nationalist and pseudo-anti-oligarchic slogans. A classic example is the fascism of 1920 – 40's, cultivated by the capitalist elite to combat the “red menace”. Thus, there is great doubt that Trump’s success has been achieved contrary to the interests of corporations. Rather, we face a cleverly played performance in which Trump played the role of a brave knight who challenged the elites.

But even if we discard this assumption, the very same elites will definitely take advantage of the chance to strengthen their power with the help of right-wing populism. Evidence of this is the friendly transition of the leadership of the Republican Party under the banner of Trump. Speaker of the House of Representatives, Republican Paul Ryan, said that "we have more points of consensus on issues that make up our agenda than differences." Full support for Trump said Senator Lindsay Graham, who, along with John McCain, the leader of the "war party".

But is the danger to the hegemony of Wall Street so great that the financial aristocracy decided to resort to Trump's help? The results of Bernie Sanders show that the demand for social justice in American society has reached a critical level. Without hiding his disregard for Sanders, the Washington Post, however, notes with alarm that socialism, which “has almost always been a dirty word in American politics,” is becoming increasingly popular. According to Harvard University research, one-third of young Americans give a positive assessment of socialist ideas, almost half of them agree that health, food and housing are basic human rights. At the same time, the 51 percentage of young people consider capitalism to be an unfit social and economic system.

The reason for the serious changes in the public consciousness is not Sanders. With all the charisma of this figure, the seeds of his appeals lay on the already prepared soil. As a result, Sanders did not so much radicalize the electorate, “infecting” him with ideas of social equality and fighting the omnipotence of corporations, as he himself was forced to follow mass sentiments. This is evident in the content of his speeches. If Sanders originally came out with rather moderate slogans that did not go beyond the framework of European Social Democracy, by the end of the primary elections his campaign had become much tougher. “The democratic party must make a fundamental decision - is it really on the side of the working people or is it subordinated to the interests of big money,” he said in early June.

Foreign policy, which previously Sanders carefully avoided, also became the subject of his criticism. He called the invasions of Libya and Iraq as monstrous mistakes and also warned against intervening in the Syrian conflict. In addition, Sanders questioned allied relations with Israel — this “sacred cow” of American diplomacy.

But the "street" goes even faster than Sanders. 2 in April in Philadelphia announced the movement "Democratic Spring", uniting dozens of left, trade union and environmental movements. Its main goal is to combat growing inequality and the influence of corporations on politics. Having marched to Washington, activists gathered at the walls of the Capitol, but were dispersed by police, who detained over 400 people. A similar, but even more numerous march of supporters of the “Democratic Spring” plan to coincide with the Democratic Congress, which will be held from 25 to 28 July in Philadelphia.

This “left renaissance” caused serious anxiety of the ruling circles. Unlike Trump, whom they scolded, but whose election campaign looked more like an easy walk, Sanders in every possible way inserted sticks into the wheels. As his separation from Clinton dwindled, strange things began to happen in the primaries: lists with tens of thousands of citizens who were ready to vote for Sanders disappeared, election commissions decidedly behind the scenes in Clinton’s favor, etc.

At the end of the race, Sanders' rivals even went for a blatant violation of the rules. Even before the final ballot in California and six other states, the leading United States news agency Associated Press announced Clinton the winner. Journalists made this conclusion based on conversations with anonymous "super delegates." This term refers to those participants in the pre-election congress who are not elected by the population, but are free to vote according to their own will. They include governors, congressmen and other representatives of the party elite. Unlike ordinary delegates who are bound by the will of the voters, the “superdelegates” will vote only at the congress, and what their choice will be - this is “fortune telling on the coffee grounds”.

However, according to the Associated Press, most of them had to vote specifically for Clinton. This message caused outrage at Sanders headquarters. They recalled that among the ordinary majority delegates, Clinton did not. Of the 2383 votes needed to win the congress, she received only 2218 (Sanders - 1833), and the “superdelegates” could change their mind.

However, the scandalous material became a signal. Without waiting for the results of the primaries, Clinton called herself a full candidate, and Barack Obama, who promised to remain neutral, congratulated her on her victory. In addition, the strongest pressure was put on Sanders to withdraw his candidacy. In the end, 12 July, he announced the termination of the election campaign and support for Clinton as the "best alternative".

The November elections, therefore, will be the competition of two candidates representing big business. At first glance, any result will not shake the existing foundations. But these foundations have already cracked. Proof of this and the phenomenal success of Sanders, and the anger with which his supporters met the decision to support Clinton. "Betrayal" - the most frequently used characteristic of this event. But be that as it may, America is ready for the emergence of a third force that will throw a left-wing challenge to bipartisan hegemony, and the current campaign was the impetus for these revolutionary advances.