North vs South: the myth of the war for the freedom of slaves 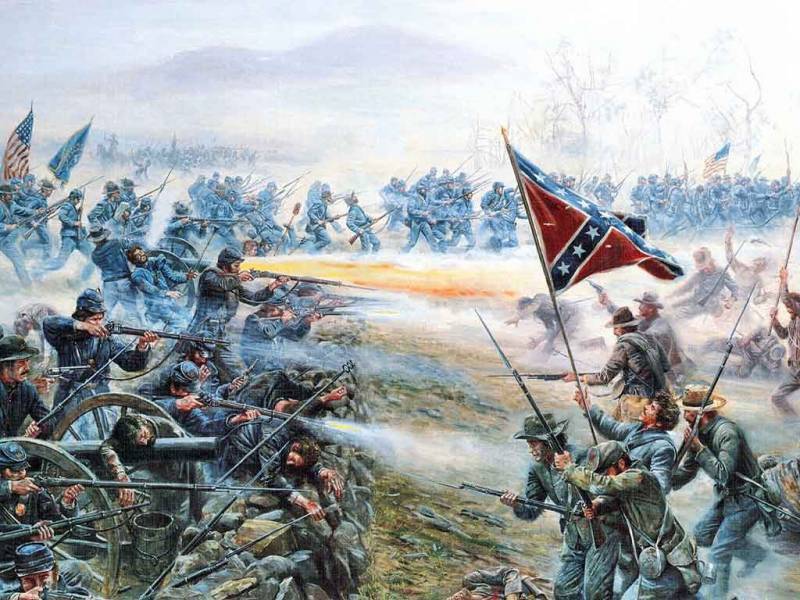 Highlights in stories United States is the war of the North and South 1861 — 1865's, the Civil War. In Russia, little is known about this event, for the majority it was "a war for the abolition of slavery in the South, for the freedom of black slaves, a battle with the damned slave owners." This message can be found both in textbooks on the history of New and Newest times for secondary schools, and in high school textbooks.


The fact is that this statement is contrary to reality. It is time for him to go to the area of ​​jokes and historical myths. The reason for the secession (secession of any part of the state) of the Confederate States of America (CSA) was the election of Abraham Lincoln as president. The southern clans considered him a protege of the bourgeoisie of the North and an illegal president.

In addition, it cannot be assumed that this was a war of only “capitalist” states against “slave-owning”, four “slave-owning” states remained on the side of the North: Delaware, Kentucky, Missouri and Maryland. It should be noted that Lincoln was not an ardent fighter against slavery, he said: “My most important task in this struggle is to save the Union, and not to save or destroy slavery. If I could save the Union without freeing a single slave, I would do it, and if I had to free all slaves to save it, I would also do it. ” Lincoln did not advocate for the social and political equality of whites and blacks. In his opinion, the blacks could not be given the right to vote, be allowed to jury in courts, hold any public office, allow mixed marriages with them, because between the two races there are huge physical differences that do not allow "living together on the basis of social and political equality. "

In the North, there were many supporters of slavery: from the poor, who feared competition from hundreds of thousands of blacks who received freedom to lose their jobs, to some manufacturers (who used black labor in tobacco and cotton factories), bankers who received good interest from the slave trade and investment in it capitals.

General Robert Lee, who led the southerner's army, was an opponent of slavery and had no slaves. And in the family of General Grant (the most famous of the commanders of the North) slaves were before the abolition of slavery. As a part of the army of the South, entire units, which consisted of blacks, fought, and they ceased to be slaves. And slavery in the South itself tended to decline, becoming economically unprofitable, it, apparently, would have been gradually abolished, but without the horrors of war and Reconstruction (when the southern states were simply occupied and plundered as conquered territories).

In the North, in the period preceding the war, a powerful industry and banking sector were created. Open slave trade and slavery did not bring such fabulous profits as the exploitation of thousands and thousands of "free" people in terrible conditions. The northern clans needed millions of new workers for their enterprises. And slaves in agriculture could replace thousands of agricultural machinery, increasing profitability. It is clear that to implement their global plans, the northern clans needed power over all the States.

Before the start of the war, the States in terms of industrial output broke into fourth place, brutally exploiting “white slaves” - Poles, Germans, Irish, Swedes, etc. But the owners of the country looked to the future, they needed first place. The discovery of the richest gold deposits in California in the 1848 year allowed, from 1850 to 1886, to produce more than one-third of the global production of this precious metal (up to 1840, almost all of the gold came from Russia). This was one of the factors that allowed the construction of a huge network of railways. To prepare the country for the battle for leadership on the planet, it was necessary to resolve the issue with the South.

Southern planters were content with what they had. For agriculture was enough and slave labor. In the south, tobacco, sugarcane, cotton, and rice were grown. Raw materials from the South went to the North. In addition, the dispute went around the issue of tax on imported goods: the North wanted to make them as high as possible to protect its industry with protectionist duties, and the South wanted to trade with other countries freely.

Thus, there was a clash between the old slave-owning elite, which was satisfied with the established order, and the northern bourgeoisie, which saw the horizons of a “democracy” of a new type, where a change in the form of exploitation would bring even more profit. Nobody thought about “good” for blacks.


Preparing for a fight

The famous war of the North and the South became the battle of two elites, and the so-called. “Citizens” —the white and liberated black poor, farmers, etc. — have become common “cannon fodder.” And for the majority of southerners (slave owners among them there was a small minority, so the planters were less than 0,5% of the population) it was a war for trampled independence, they considered themselves to be a nation in danger, loss of freedom.

Preparations for the war went on for quite a long time - a “public opinion” was being prepared. And I must say, this process was so successful that until now the opinion about the war “for the freedom of blacks” prevails in the mass consciousness. Back in 1822, a colony of “free colored people” was founded in Africa under the auspices of the American Colonization Society (an organization created in 1816) and other private American groups in Africa - in 1824, it was called Liberia. After that, a loud campaign "against oppression" began. She was not only in the press of the North, but also among the black slaves in the South. Negros for a long time did not give in to provocation, the majority did not want to go to Africa. But in the end, a wave of senseless Negro uprisings and riots swept across the South, they were brutally suppressed. Born so-called. "Lynch courts", at the slightest suspicion, Negroes were burned, hung up, shot.

A large information campaign was held on the occasion of an attempt to capture an arsenal at Harpers-Ferry by John Brown in 1859. It was an abolitionist - supporter of the abolition of slavery. Inspired by the images of the Old Testament, where the prophets and warriors did not retreat before the massacres "in the name of the Lord", this religious fanatic fought in Kansas (there the outbreak of the Civil War occurred in 1854-1858 years). There he became famous for the Potawatomi Creek massacre. 24 May 1856 of the Year Brown and his people knocked on the doors of the settlement houses under the guise of lost travelers, and when they were opened, they broke into houses, threw men into the street and literally chopped them into pieces. Brown wanted to organize a general Negro rebellion. October 16 1859, he tried to seize the government’s arsenal in Harpers Ferry (in modern West Virginia), but the diversion failed. Brown hanged. They made a hero out of a fanatic and a murderer.

The organizers of the information campaign could be content - the war could be started under “humane” slogans. The information war was won before the onset of the hot war. That is why the South during the fight remained in isolation, could not get loans. The Russian Empire even sent two Russian squadrons to New York and San Francisco during the civil war of 1861-1865 to provide moral support to the Northern States and show the world St. Petersburg’s readiness to defend US independence in the event of possible armed intervention by the European powers (to example, Britain). In New York stood the squadron of Admiral Popov, and in San Francisco - Admiral Lisowski.

War and its results

Southerners skillfully maneuvered, inflicting a series of sensitive defeats northerners. General fame won General Robert Lee. But the advantage in human, financial, military-industrial resources was on the side of the North - they could mobilize more people, put out more guns. General Northerners Ulysses Grant did not at all consider human losses. In the North, they introduced universal military service, seized all the efficient men, those who could not pay something in 300 dollars. Forced recruitment, raids. All the white poor thrown "cannon fodder." As a result, the North was able to bring its army almost to 3 million people against a million southerners. Many adventurers, adventurers, winners, revolutionaries and romantics who fought for "freedom" came to the USA. In the army of the North, barrage detachments were used, they had to drive the retreating soldiers back, if the fleet refused, they were shot, only the wounded were allowed to pass.

As a result, the northerners won the war of attrition. Won the North, this has already been said, and on the diplomatic front. After the war on the 13 th amendment of the Constitution (she banned slavery), the negros received "freedom". They were simply thrown out of the barracks, huts, from the land of their owners-planters, deprived of even the few property that they had. The lucky ones were able to settle in with the servants of their former owners. At the same time, a law was passed in the States that prohibited vagrancy. Thousands of people could not return to their former life and move around the country, looking for work. Northerners planned to transfer the mass of blacks to mines, mines, factories, construction of railways. But in the end, a significant part of the Negroes found a “third way” - a wild revelry of “black crime” began in the States, aggravated by the defeat of the southerners, the South was the de facto occupied territory, with all the ensuing consequences. In addition, many southerners died in battles, were placed in camps and could not protect their families.

In response, the whites created the Ku Klux Klan, the people's squads, again a wave of "Lynch ships." Mutual hatred and slaughter created an atmosphere of a fully managed society, where the masters of the North held their own activities to transform the States.