July 13 2016
56
Fun with horror live. And it’s already fun to the extent that any insanity that is possible in this life at all is a completely normal phenomenon today. Did French fishermen catch a Portuguese submarine off the coast of Britain? Yes please.


"The Portuguese military submarine hit the net of a French fishing vessel off the coast of Great Britain. TASS reports, referring to the prefecture of the French zone of the Atlantic.

The Tridente submarine, which participated in joint maneuvers with the ships of the British Navy, got entangled in the nets of the French fishing trawler Daytona.

"The submarine immediately ascended and made contact with the trawler," the prefecture said. As a result of emergency, no one was hurt.

Currently, the fishing net is removed from the boat, the trawler went to the shores of France. "

Want to see an Internet site that even security agencies cannot handle? Sure, not a problem.

"In the Security Service of Ukraine, the National Police and in the office of the Ombudsman for Human Rights, they recognized that they could not in any way affect the Peacemaker website, supervised by people's deputy Anton Gerashchenko."

“Criminal proceedings in the form of a private prosecution begin only on the basis of a statement by the victim,” said the ombudsman’s response. The SBU also reported on the ongoing investigation by the National Police, adding that the function of overseeing the investigation is vested in the prosecution authorities. The agency itself cannot take any action. "

Today in Ukraine there is no legislatively defined mechanism for blocking user access to Internet resources that are used to post content, ”said the Security Service of Ukraine.

But the first place in trolling Ukraine is rightfully taken by the Polish Minister of Defense. Polish Defense Minister Anthony Matserevich believes that Russia also has a share of responsibility for the Volyn massacre. He stated this on the program "Minęła dwudziesta" "of Polish television 11 July.

"This is obvious (fanning the negative role of Ukrainians in the Volyn tragedy by Russian propaganda) ... However, this should not prevent us from seeing ... that the real enemy to those who used part of the nationalist forces of Ukrainians for that terrible crime, genocide, is Russia. is the source of this terrible crime. " 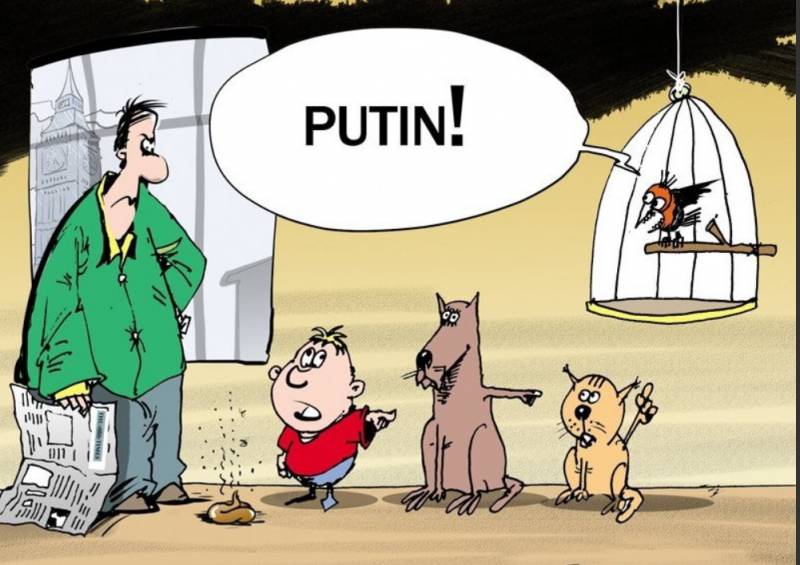 No, sir Minister thought he was playing on the side of Ukraine. Everyone has long known that Russia and Putin personally are always to blame for everything. Truth with Putin bobble comes out. In his style, he decided to "replay" Western honest democracy. Born later, sly. And Russia at that time was just one of the republics of a completely different state - the USSR. In the same way as Ukraine, Belarus and 12 of the Union Republics. Apart from autonomous ...

He considers the minister Pan to blame Russia - a feather in his tail for the speedy dissemination of a new idea. To help the wind. Which is in the back. Only here Georgians, Kazakhs, Azeris, Armenians will be offended ... I will keep silent about Lithuanians, Latvians and Estonians. In the USSR, all the republics were equal.

From these words, normally educated people are funny, just educated - sad, fools ... And who cares about the opinion of fools? Today, the head "blows" completely different people. Those who recently recognized the heroes of the UPA-OUN. Those who painted their bodies with fascist swastikas. Those who rejoiced at the appearance of Bandera Avenue in Kiev.

OUN-UPA were members of the NKVD! NKVD, Karl! And it means that those whom Ukrainians are ready to dig out from their graves in order to kiss instead of breakfast their decaying relics are ordinary Soviet security officers! And Bandera too!

True, there is another discrepancy. Other enkavedeshniki caught these same OUN and Opovets for many years after the end of the war. Caught and mostly destroyed. And those, respectively, continued to kill everyone and everything in their bloody way. No longer looking at nationality and faith. To kill simply because people already lived AFTER the war. Lived post-war life.

What now believe Svidomo? Who is the idol now? Where is the truth in this world?

I will give a hint for Ukrainian propaganda. Too clumsy they work today. Hate to read. So, the main thought should be the one that I voiced. NKVD destroyed the NKVD to cover their tracks! They are Russian. They are not spared to hide ...

It looks like "Ukrainstvo" is contagious. And the infection spreads in any way. The main thing is to be close to the "sick".

Ukrainian President won the whole world said that Ukraine on 95% fulfilled the Minsk Agreement. This is not a typo! These are the words of the President of the country, sick of "Ukrainians".

“Ukraine has fulfilled the political obligations imposed on it by 95% under the Minsk agreements and all 100% security requirements. This was announced on Monday by the President of Ukraine Petro Poroshenko during a briefing after a meeting with Canadian Prime Minister Justin Trudeau in Kiev, reports Reuters.

"Ukraine has clearly proved that 95% of all political commitments fulfilled 100% in the field of security. In this situation, it is vital for us that Russia fulfills the security criteria in order to launch a political process," the head of state explained.

In their desire to annoy Russia, Western politicians are ready to forget their own dead. Ready to spit in the soul of their own people. We are ready to forget our relatives, who are not lucky enough to be in those bloody years in Volyn. Is it worth it? Should I sell my graves for the sake of ghostly political goals? Let them decide for themselves.

The Russians have a proverb that characterizes our worst enemies. Ivan, kinship is not remembering! Our epic hero, Ilya Muromets, accomplished his main feat precisely in the fight against such “Ivan”. His own son, who raised the enemies. "Ukrainstvo" today is just another virus, generating such "Ivanov". And yet, "Janek", "Otto", "John" and others.

Ctrl Enter
Noticed oshЫbku Highlight text and press. Ctrl + Enter
We are
Results of the week. “Tut's neighboring state was threatened with war. Lend, please, half a dozen millenchik on militaritskih goals "The results of the week. "Filtered foot and mouth disease virus develops especially rapidly in organisms weakened by nicotine, alcohol and ... excesses are bad ..."
Military Reviewin Yandex News
Military Reviewin Google News
56 comments
Information
Dear reader, to leave comments on the publication, you must sign in.